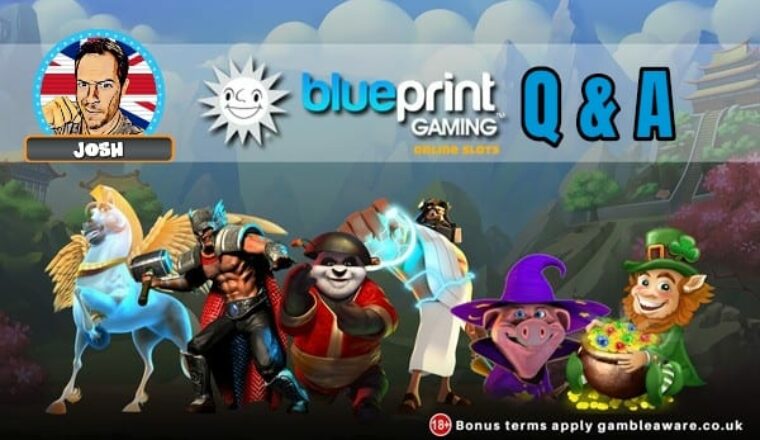 As many of you know, Blueprint gaming is one of our absolute favourite game providers at this very moment. And so we wanted to pick their brains a bit and get to know them better.

We wanted to know how they adjust their games to fit streamers ( or if they even keep us in mind) and we also wanted to dig deeper into the licensing of Megaways slots.

So we sat down with Jo Purvis who is the Director of Marketing at Blueprint Gaming. We are very grateful that she took the time to answer our questions.

Has Blueprint Gaming looked to develop and design games specially designed and catered towards streaming audience?

It’s an approach that we haven’t moved towards at this current moment in time, but we’re definitely working more closely with streamers as they become even more prevalent within the iGaming community. Our wide range of games are certainly designed and developed to appeal to certain audiences.

Some of the content is determined by the jurisdiction that the game is intended for, such as the UK or Scandinavia, and others can be influenced by our desire to make a new title appealing to those who enjoy jackpot-based games.

Ultimately, a good game that’s appealing and successful in the iGaming market will inevitably be picked up by the streaming community.

As the popularity of streaming continues to grow at a pace, we are purposely becoming more active within the environment. We’ve partnered with several streamers for exclusive game launches, offering previews of pre-release games and supporting them with interviews.

It’s an important way for us as a developer to directly communicate with the end-user – the players.

Blueprint has really had a resurgence after taking the Megaways™ licence. Being such a big slots developer, what made you decide to license Megaways™ and not produce your own trademark maths model?

Our games roadmap pre-licensing the Megaways™ mechanic was just as strong as what we offer today. Megaways™ has simply added a new arm to our portfolio offering and allowed us to reach a wider audience.

As any developer, operator or player knows, the real trick to creating a successful title is in the math model and hitting the fine balance which appeals to all parties.

Attempting to replicate that method once a model has already been adopted by players is very hard, so licensing Megaways™ was essentially the fastest way to market for Blueprint in offering the mechanic which had been so widely accepted.

The fact that so many other developers have followed our lead in licensing the mechanic from Big Time Gaming demonstrates that we’re not only a forward-thinking company, but also smart in our business decision making.

Blueprint has often produced some brilliant games and then looked to reskin them into slightly different themed slots which feel and play very much like another version of a previously released game. What’s the logic and thought process behind releasing such similar games?

Reskinning games is a very accepted practise that’s as old as gaming itself. From way back at the start of land-based gaming in the UK, where many of the current Blueprint core-staff cut their teeth, re-imagining the same or similar game with a new theme has proved a successful model.

Adding something extra such as a new feature or modifier, or even tweaking the paytable, gives players a twist on a game they’re already familiar with. At Blueprint we very much believe in a mixture of Evolution of games and creating original games from scratch.

You have to do both to be a successful developer but you can’t make developing games from scratch the main focus as this takes a lot of time, development and resources, so the method of reskinning past-releases enables developers to keep the ball rolling while these new concepts are developed.

Also, there have been occasions when a good game and math model can be overlooked because the theme at the time didn’t resonate with players. Bolting on new artwork can reinvigorate a game and provide it with the attention it initially deserved.

Do you think the high variance nature of Megaways™ slots and the hit ratio of triggering a bonus is something that can invariably turn players away from some of your games, and how would you look to address this?

It’s important to understand that players have different tastes and behavioural habits. Some love the long-term engagement and entertainment that gaming brings and are happy to spin at low stakes and take small wins. This segment of players look to enter features on a regular basis and accept the gains of a softer profile, as spending time on the game is just as important because it’s an enjoyable pastime.

On the other hand, there are players who primarily play slots to secure big wins. They stake high to increase the buzz of playing and accept that the bonus hit rate is harder, but the eventual rewards are greater. At Blueprint Gaming, we pride ourselves on offering something for everyone, which is why we have developed a diverse games portfolio that features a wide range of game themes and mechanics.

The UKGC put a stop to bonus buys in the UK which has been a rather controversial subject within the streaming community.

1: What are your thoughts regarding this quite radical move?

We work very closely with the UKGC and fully support and understand their reasoning for the changes in regulation. They are there to protect players and as a responsible slot developer, we are here to work with them to achieve that goal.

2: Have Blueprint’s All Action games proved popular with players and can we expect to see more of them launch? Either as brand new games or variants of original games which featured bonus buys such Buffalo Rising which saw the release of Buffalo All Action?

Blueprint’s All Action titles have proved popular with a number of players. If there’s enough demand from operators and players alike, the concept will definitely feature in our future plans.

Trending, as with any industry these days, is ultimately the key to how we plan our roadmap.

Players are always on the lookout for the next mechanic which adds something extra to their experience, so we’re constantly implementing new concepts to our games, as shown with our recent Power 4 Slots mode. You have to get the best out of a new feature before the next one comes along, ever-evolving your game style to meet the requirements of operators and players.

Blueprint is a household name in the UK as far as slots and FOBTs are concerned. However, as the UKGC looks to impose new regulations such as the removal of turbo spins, are you going to focus at expanding your marketing and games to other locations that you haven’t previously focused on before?

We’re always looking at new opportunities and ways to expand the business – as one door closes another opens. Blueprint, either directly or with other industry suppliers, is always in active dialogue with the UKGC.

This dialogue helps both sides understand why new regulations are needed to protect players. Blueprint always wants players to be first and foremost entertained and enjoying their gaming experience. If through analysis there are changes that can reduce problem gambling behaviour, then making those improvements should be welcomed.

Do Blueprint have anything ‘revolutionary’ or ‘innovative’ on the horizon that differs greatly from your current portfolio or slots. For example, Dragonfall was your first grid-based slot game. Are you planning anything that has a trademark feature such as Megaways, infinity reels or GUGABLOX?

We’re always monitoring the industry to see what trends are emerging and new games and features that are resonating with players, while also brainstorming new concepts and ideas to develop the next big game.

Our games designers are players at heart, so take as much fun in playing slots as they do in designing them.

While we can’t reveal too much at present, there are sure to be some interesting and exciting concepts to land on the reels of our games in the coming months.