Make way for the Ladies in Play’n GO’s latest instalment in the ‘rich’ series, Blinged Slot, this time with an urban emphasis.

The first game in the series was Pimped, which made you feel like a little bit of a player, followed swiftly by That’s Rich, which had more of an eloquent and sophisticated theme.

This time, the ladies taking precedence in the new hip-hop themed game Blinged.

Blinged is very similar in certain areas to its predecessor Pimped in terms of theme and key gameplay aspects, but still has distinguishable differences that make it fresh.

Play’n GO are of course the brains behind this one, and what a developer they are. Play’n GO have been enriching our lives with some cracking games lately.

From the rock-themed Twisted Sister, to the African Safari that was Win A Beest. Any game that holds the Play’n GO badge automatically seems to hold a lot of potentials.

Let’s tap into our inner Hip Hop persona and delve deep into what Blinged has to offer.

Admittedly referencing Frank Sinatra’s New York wasn’t very gangsta or hip hop of me. But, it is the setting for Blinged.

The game has an upbeat hip-hop theme which sets the scene well, with the occasional woman vocalist, it’s all about the ladies in this one. The reels themselves at least look expensive, with diamond-encrusted symbols.

There is also a Wild symbol that substitutes for all except the scatter. As well as substituting for other symbols, the Wild pays, making this the highest paying symbol.

As with pretty much every other Play’n GO games, you can expect a diverse amount of betting options. Betting for this game goes as small as 0.10, and as high as 100. 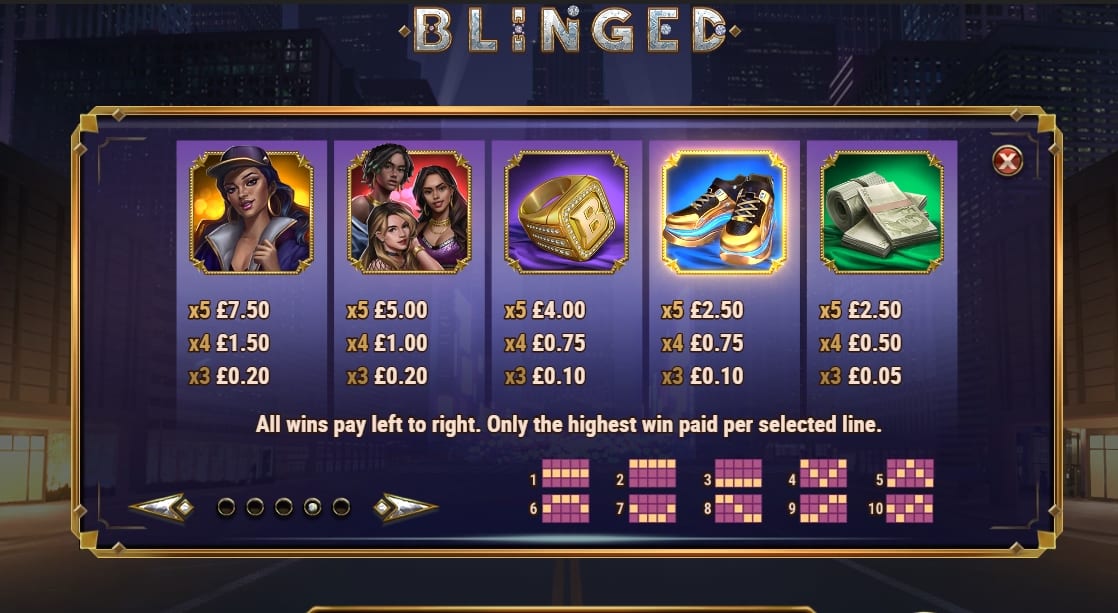 Blinged utilises a more traditional way of playing in the form of pay lines, something that always seems to resonate well with people looking for that classic play style.

It’s a 5-reel video slot with 10 set pay lines, which are always active with wins paying from left to right. As mentioned, the Wild symbol will substitute for all except the scatter symbol.

There isn’t a whole bunch going on in the base game truth be told. There isn’t a multitude of different features at play here to keep you going, so you’ll definitely be wanting the casino bonus feature.

Spin Until You Win

Blinged utilises an interesting feature, which is spin until you win. If a win spin does not result in a win, then a re-spin will ensue and will keep going until you win with no limit.

With every re-spin, the multiplier will increase by 1x. Blinged is interesting in the way that you DON’T WANT to win. The reason you don’t want it to win is, of course, this progressive multiplier.

The multiplier carries over to the next win spin and any subsequent re-spins that might follow. Win spins are guaranteed to award a win.

Watch one of our big wins on Blinged live on stream!

It’s an odd feeling when you don’t want a game to win, a feeling only really familiar when you’ve done so poorly in a bonus that you hope it stays poor for a Free Spins guarantee…Yet, it’s also an exciting feeling.

As mentioned, the more dead spins you have, the more your multiplier will climb, and we’ve already seen what the game is capable of when that multiplier gets high enough that a few symbols mean big money.

It also seems to re-trigger fairly regularly, and you only need 2 scatters in the base game to be awarded one spin, that could easily materialise into more if you get more scatters, not to mention the re-spins.

Blinged is available at most New Casinos and also available to play on Mobile Casinos.

Those who enjoyed the previous instalments in the series will no doubt enjoy this too, as may everyone else, but for both audiences, it’s nothing groundbreaking.