Courageous, curious, intrepid and fiery are some of the words you might hear associated with Gemma, star of the show in Crystal Quest Frostlands, a sequel to two other games by Thunderkick.

Our previous adventure with Gemma in the Crystal Quest series saw us dabbling with sorcery in Crystal Quest Arcane Tower. Gemma immersed herself into the realm of sorcery and mystic secrets as she explored the Arcane tower in pursuit of hidden treasures.

Crystal Quest Deep Jungle was no different. This was our first introduction into the Crystal Quest world as we explored the Jungle with Gemma and fought back any monsters that stood between us and riches. The Crystal Quest series has been relatively consistent in both releases and its gameplay, with extremely similar statistics, like RTP, and the same maximum win capability of 15,000x.

Features were more or less similar as well, with subtle differences between Crystal Quest Deep Jungle and Crystal Quest Arcane Tower that sort of made them a little bit more than a re-skin, but only a little bit.

In this Crystal Quest Frostlands Slot Review, we’ll be

The Theme for Crystal Quest Frostlands shows a chilly landscape with crystals that are frozen over in the cold conditions.

In the night sky you’ll see the Northern Lights, also known as the aurora borealis which sets the scene and makes the game a little bit more aesthetically pleasing. The artwork lives up to the standards that you might expect from a Thunderkick game, showing off their professionalism through illustration.

Character Symbols grab your attention in Crystal Quest Frostlands too. This surreal and unearthly beings are out to stop you from getting them crystals, but they’ll fail just as the others did!

Overall, the Crystal Quest Frostlands Theme looks very similar to previous games, having neither improved nor worsened as the series progresses. The lack of improvement isn’t indicative that Thunderkick are lacking in progression in their games, the Crystal Quest Games were just always good, maybe there’s nothing to improve on with this series?

Theme aside, let’s look to betting options and symbols and their pay outs and see if the rewards are worth the trip out in the cold.

Betting options in Crystal Quest Frostlands range from a low option of £/€0.10 per spin, and a high option of £/€100 per spin. Thunderkick always cater to every kind of budget, so you’ll find a lot of other options in between the two.

There are some fairly decent pay outs available for connecting some of the higher paying symbols, and the features within the game make it even more potent with potential.

Crystal Quest: The Base Game and Features

Crystal Quest Frost Lands is a 6-reel Video Slot with 4,096 ways to win.

To form a win, you’ll need at least 3 matching symbols to connect from left to right, starting from the left-most reel. A returning feature from the previous games is the Avalanche Feature.

Another returning feature from the previous games is the Multiplier Feature.

Every time an Avalanche triggers, the multiplier will increase by an increment of one. This is especially important in helping you rack up those bigger wins as the multiplier increases, and it’s a great Base Game Feature to have included within the game.

With 4,096 Ways to win, cascades don’t exactly go on forever like they might in a Megaways Slot with 117,649 ways to win, so quite often you may get a couple of cascades followed by a loss, so as good as it is, it can fall flat sometimes.

Every Crystal Quest game has a little something that differentiates it from its sister slots, and in this case it’s the Massive Symbols.

Every symbol except for the Wild and Scatter may appear as Massive Symbols. This can happen in both the Base Game and the Bonus. This may appear as a 2×2 or a 3×3 symbol, and it’ll crush any symbols underneath of it.

This paired with the multiplier feature could well be a formula for some big Base Game hits. The Massive Symbol crushing all underneath it also makes a little bit of extra room for a symbol of the same type to land, increasing the winning ways even further.

Crystal Quest is far from devoid of features in the Base Game, but as we all know, the Free Spins is where things both more exciting, and more rich with potential. 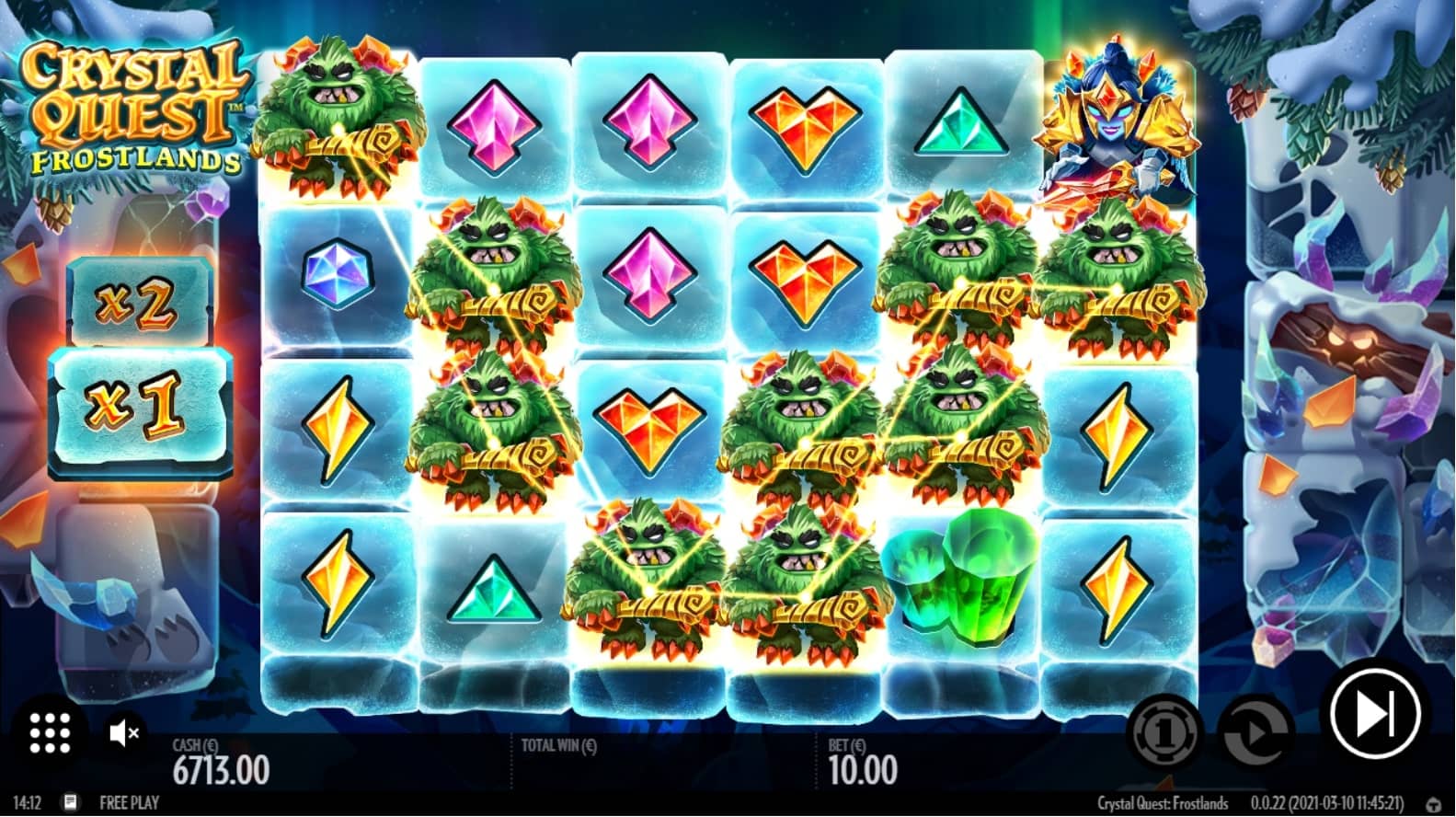 To Trigger the Free Spins in Crystal Quest Frostlands, yo0u’ll need at least 3 Scatter Symbols to land anywhere in view. Any additional Scatter Symbol after the third will award 3 extra Free Spins, but if you don’t manage to land extra, you’ll start with 12 Spins.

Not all is lost if you want extra spins though. Within the actual bonus itself 2 Scatter symbols will award 3 extra spins, with any Scatter above 2 offering an additional 2 spins.

In Crystal Quest Frostlands Free Spins, the multiplier does not reset between spins, so you need not worry about getting connection after connection to keep a multiplier going.

There’s also a Wild Explosion Feature. This will trigger if there are no winning combinations present on the reels. Symbols that are horizontal and vertical to the Wild symbol will be destroyed, leaving room for an Avalanche feature to possible introduce some new winning combinations. 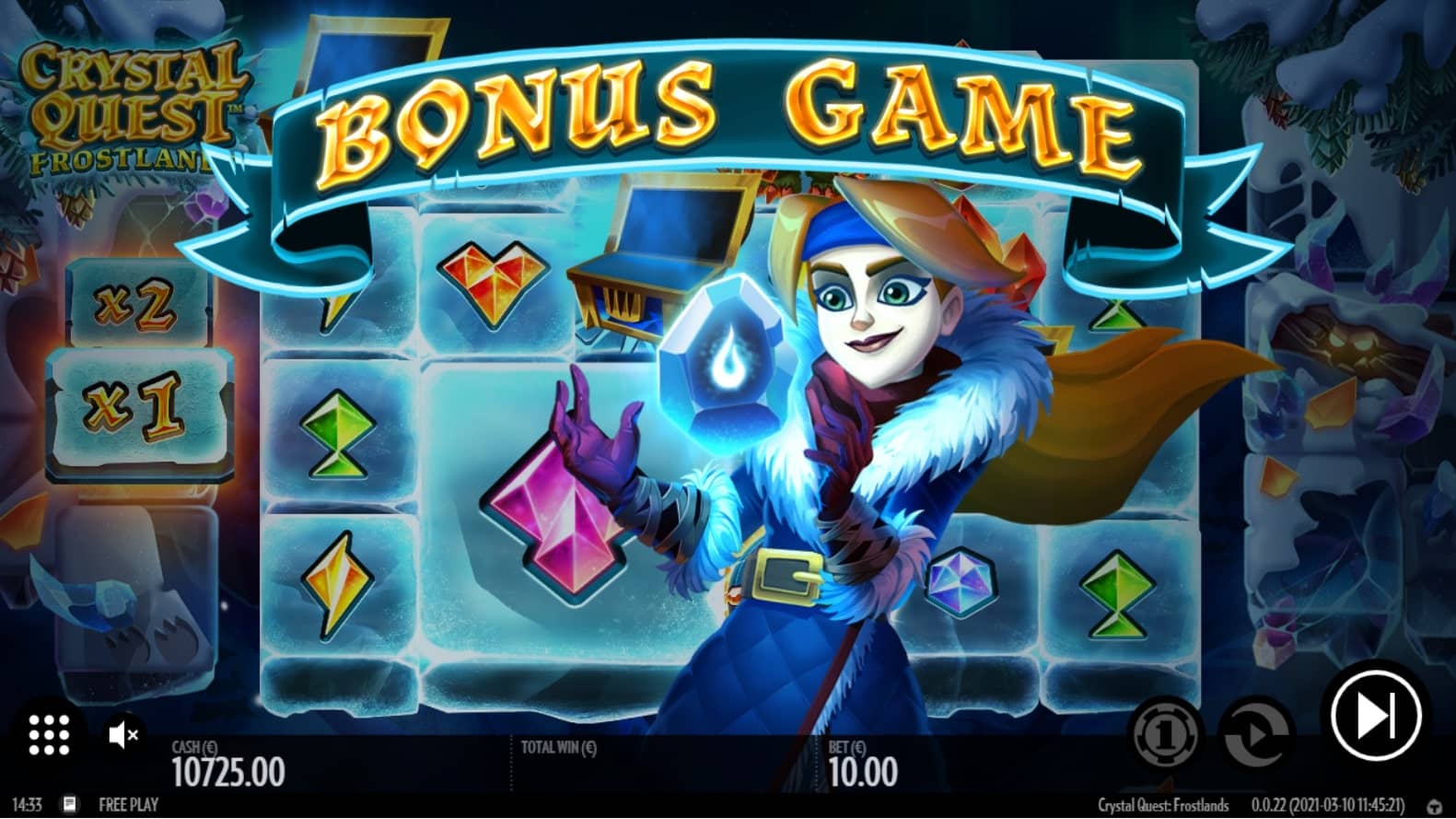 Where to Play Crystal Quest Frostlands?

The Crystal Quest series never seems to do much different compared to previous games, with each of them having at least one Base Game feature that differs.

If you’re a big fan of the series, then you’ll undoubtedly thoroughly enjoy this one too, but if you weren’t a fan of the first 2 games, then don’t expect Crystal Quest Frostlands to change your perception. In a sense, Crystal Quest Frostlands is a bit of a re-skin of the previous games, but with a different theme and a slightly different feature.

It’s a shame, because Thunderkick have brought out some legendary games in the past, and even their Beat the Beast Series of games different enough from each other that they could be considered their own games.

Maybe instead of the subtle differences within the Base Game features, Thunderkick should turn their attention to Bonus Gameplay to shake things up a little bit.

Although the game is more or less the same, it doesn’t take away from the fact that it can be fun to play. There’s nothing wrong with the gameplay features offered, or the potential it’s capable of, it just needs a little bit of innovation after 2 just like it.

Speaking of potential, just like it’s predecessors, Crystal Quest Frostlands is capable of wins of up to 15,000x, which would certainly make a trip to the frozen glaciers of the Frostlands worth it.

The RTP for the game is also more or less in line with the other games, at 96.16% RTP. This is a pretty decent RTP value, or at least in line with what people consider to be average, so no complaints there.  The game also has a high volatility rating like it’s sister slots did, with a rating of 8 out of 10.

Overall, if you’re desperate for a little bit of something different, then you won’t really find it with Crystal Quest, but if you’ve never tried the series before then there’s no reason why Crystal Quest won’t be a thoroughly entertaining endeavour, and one that may pay off for you.

On the other hand, Thunderkick have many different games on offer that are a lot more gripping, like Riders of the Storm and pretty much any of their Beat the Beast Games.