Guitars at the ready, ladies and gentlemen as you travel back in time to relive your long forgotten dream to take to the stage, bring down the house and smash a few guitars with this action packed instalment from Play N’GO, Twisted Sister Slot. Just leave your hairstyles in the past where they belong.

Those of you that live, breathe and embody everything 80’s will probably remember Twisted Sister, the band behind the Megahits “We’re not gonna take it” & “I Wanna Rock”. Ranked no. 73 in VH1’s 100 greatest artists of hard rock is an impressive feat..But is the slot just as impressive?

When you load the game you’re greeted with the familiar but electrifying sound of Twisters Sister’s hit “I Wanna Rock”, and when you’ve finished smashing your vintage Les Paul, put down whatever is left of it and turn your attention to the all too familiar and user friendly interface we’ve come to love from Play N’Go’s much coveted grid style format. A format which at the moment is very much dominated by Play N’Go and has brought us some of the games we know and love such as Wild Frames, Reactoonz and Tome Of Madness. 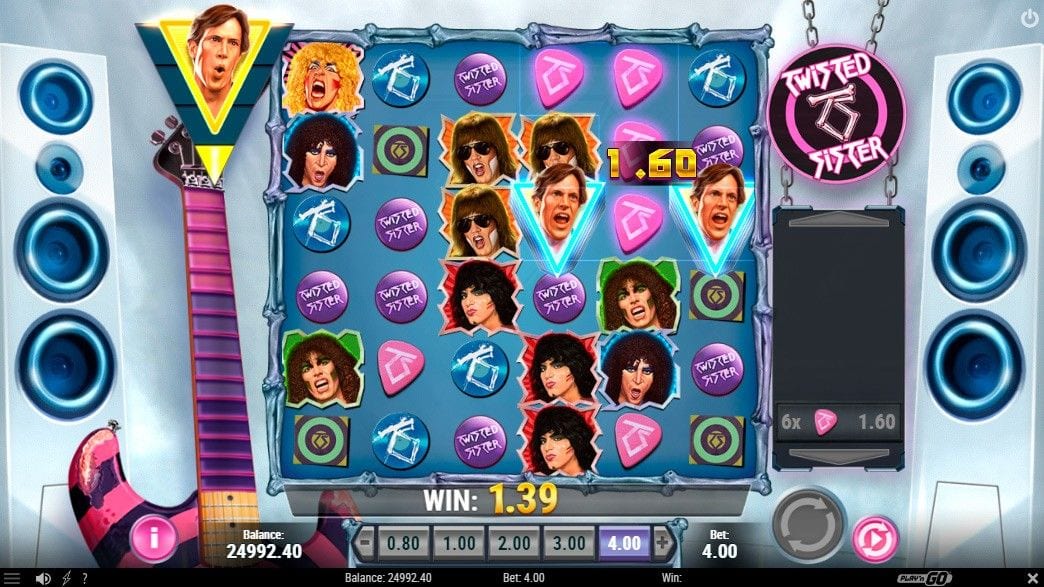 On Stage we’ve got a 6X6 Grid that will cascade with 36 symbols to hit wins via a cluster pay system. Much like some of our favourites, wins are achieved by hitting 5 or more symbols in a cluster, which will subsequently disappear and the gaps replaced with new symbols, which will either allow for multiple wins on one spin, or will end when none of the symbols on the grid fill a cluster of 5.

Here are all the possible Guitar Charge features:

What we’ve got here seems akin to Alteration, Implosion and Alteration in the much beloved Reactoonz, but note that Scream will not transform all ‘non premium’ symbols like Reactoonz does, but rather the ones around the symbol selected. An incision counterpart doesn’t seem to be present, which is a curse, as the Incision can start a motion of very sexy chain reactions but also a blessing if you’re not sure if you can stand the tilt of the incision turning into another symbol instead of wild.

WE’RE NOT GONNA TAKE IT!!

The Angry Dad from the video to the song “We’re Not Gonna Take It” has made his return and I guess 30+ years wasn’t long enough for him to calm down. On Any non-winning spin Angry Dad can throw in two Wild Scatter symbols through the DAD GETS ANGRY feature…4 of these will trigger the We’re not gonna take it feature IF each of the 4 Angry dads were used as part of a win. Any additional Angry dads that appear as part of a win subsequent to this will increase the multiplier going into the We’re not gonna take it feature.

During During this feature Mega band symbol, a large 2×2 wild appears and will select an angry dad randomly and moves towards it until they become adjacent. Once adjacent, it will be removed from the grid and the feature will conclude if there are no more Angry Dad’s on the grid.

The Mega Band symbol will depart the grid with the last remaining Angry Dad but any charges gained by winning Band members during this will trigger after the last Angry Dad has departed the board. The Mega band Symbol by itself does not add any Guitar charges.

We can see what Play’N Go were trying to do with this slot, however it may well, and probably will come in as 2nd best compared to other exciting and similar instalments we’ve seen from them in the past. It’s not a bad slot by any means, but it falls short of Reactoonz and Wild frames in my opinion.

If you’re a fan of the band it’s sure to strike a chord in your heart but for everyone else, I’m not sure it’ll be one of the hall of famer slots that you’ll have a punt on every time you play, and may well even be forgotten about after your first try. The volatility isn’t that high and frequent and smaller wins don’t make it very Rock N Roll. Testing this game during Demo mode for 400 spins certainly triggered the top feature more than a couple of times, but sadly around 50x was all I could muster up during this time…

But the potential is there as you’ve got to remember that with these features, they’re going to pay…it’s a big 2×2 wild, so naturally compared to other games the volatility will need to be a little lower because it’s guaranteed to win. However Play N’ Go boast a maximum win of 4500x which may be ever so slightly smaller than we’ve seen from other instalments from them, but still formidable. To sing its praises the game is good, well made, it’s fun, and the potential is there for some massive hits.