The power of the mighty Greek army inspires this online game called 300 Shields Extreme Slot, based on the movie of the same name.

The slot has a well-designed interface with intuitive game buttons that allow you to control the wagering expertly. The theme is rich with creative artwork full of images like Spartan weapons, a temple in the background and, of course, the hoards of brave warriors.

The 5-reels and 25 pay lines promise much action upon the reels of destiny. It is a war worth fighting out on the battlefield with an ultimate prize is a 300x multiplier that will boost your payouts tremendously.

The video slot has many positive features including huge payout prizes plus the great Shield Feature. The coin sizes start at £0.02, rising up to £5 each, which creates a maximum bet limit of a rather high £125 a spin, which means there’s a bet that fits every bankroll.

The pace of the game is speedy and flies in smoothly, and a winning payout is accompanied by atmospheric and dramatic musical interludes that add to the overall appeal of the game.

The Free Spins are set off with the powerful Scatter symbol, and you can win more shields with each spin. A warrior symbol carries an increasing multiplier that adds even more excitement. 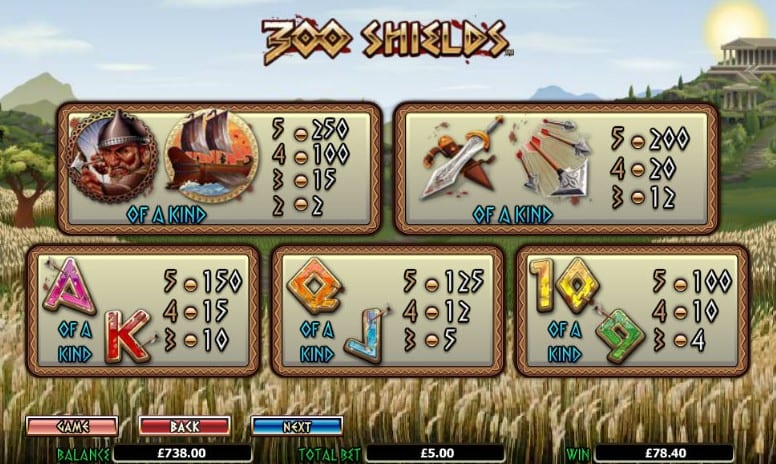 The powerful Wild Warrior symbol can substitute for the other symbols apart from the Scatter Shield.

Whenever the Wild is involved in a winning pay line, you can expect to see a cute and animated sequence to appear where you will see a gold-armoured soldier waving his sword out from within the reels, accompanied by a warrior’s battle scream.

The Scatter Shield also morphs into an engaging animation if you get at least two of them. A similar one to the Wild, and a golden-armoured, helmeted warrior popping out, with a similarly powerful scream and a wave of a sword.

The Free Spins round is called the 300 Shields feature and is an excellent bonus serving up many great chances to win. You will receive 5 Free Spins for landing three Scatters, all with double all Warrior winning payouts.

Battle of the Century

The game is loosely based on the favourite original comic book classic 300. A Hollywood movie was released in 2007 to much acclaim, and the tale follows the exploits of King Leonidas, who bravely leads his 300 Greek Spartans into brutal battle against a far superior number of soldiers to defend their home territory against the evil Persian demigod King Xerxes.

The warlike theme is majestic and grand and pierced with arrows in many places. The arrows feature predominantly on the game as the weapon of choice.

The wheat fields, blue skies and Spartan temples enrich the environment, and the multiple symbols fit in nicely. There are the standard high-value playing cards depicted as arrows. They are joined by the character symbols which are a cluster of arrows, a double-edged sword covered in blood.

There is a long wooden sailing ship with oars, a brave Spartan warrior who shoots an arrow and gets animated when you get two or more of them on the reels. The powerful sounds and music add more atmospherics to immerse you into the game and theme as you wager along.

Watch one of our big wins on 300 Shields Extreme Slot live on stream!

You can play using your mobile devices as well as a PC, and the online slot is fully compatible with iOS, Android, and Windows operating systems.

The slot has some nice touches, like the Free Games mode, when a sword will appear to the right of your screen to keep track of your shield count and raises the blood level when it appears on the blade of the sword.

Another neat touch is the Autoplay button which will allow you to set your bet and spin the reels automatically. You can choose from 5 spins up to 500 auto spins. The range of bets is hugely satisfying, reaching all the way up to €125 a spin. The theme is entertaining, and the game is really pleasing to play, especially when those coveted wins start off!