Deep within the depths holds incomprehensible treasures ready for the taking, but it’s guarded by the legendary beast of Norse mythology, the mighty Kraken.

Developed by the Swedish provider Thunderkick, Beat the Beast Krakens Lair Slot is the first in a series of five exciting Beat the Beast games, promising high volatility action and described by Thunderkick themselves as ‘only for the brave’.

We’re no stranger to some of the brilliant instalments provided by Thunderkick in the past, from Esqueleto Explosivo 2 to Riders of the Storm Slot, Thunderkick have proven that quality and longevity are common traits shared by their games.

Astronomical in size and said to be capable of devouring an entire ship, the Kraken is one of the most terrifying creatures of Nordic folklore and serves as the theme for the first Beat the Beast instalment.

It’s purposefully simplistic in terms of visuals, displaying an ocean floor where light barely reaches, and sunken ships that fell victim to the Kraken sitting ominously in the background. The music is dramatic and sets the scene for an epic face-off with the Kraken.

Kraken’s lair is a 5-reel, 3-row video slot with 9 traditional pay lines. Betting starts from as little as 0.20 and caps at 100 catering for all types of different players.

There are 11 symbols in total, with the Kraken sitting proudly atop the pedestal as top symbol, and a gold Kraken Emblem Symbol which acts as a wild, a scatter and also has a scatter pays feature.

Kraken’s lair is relatively simple in the base game, but it’s not without excitement. It’s a traditional pay line experience for those who appreciate a classic slot feel and easy to understand. Wins are paid from left to right and 3 are needed to form a win.

While still relatively simple, the game has massive potential. The golden Kraken Emblem symbol can generate Scatter pay wins, landing 3 on a payline will pay 2x, 4 will award 20x and 5 will land a massive 200x your current stake. To add to the great potential the game also has an Expanding Win Feature. 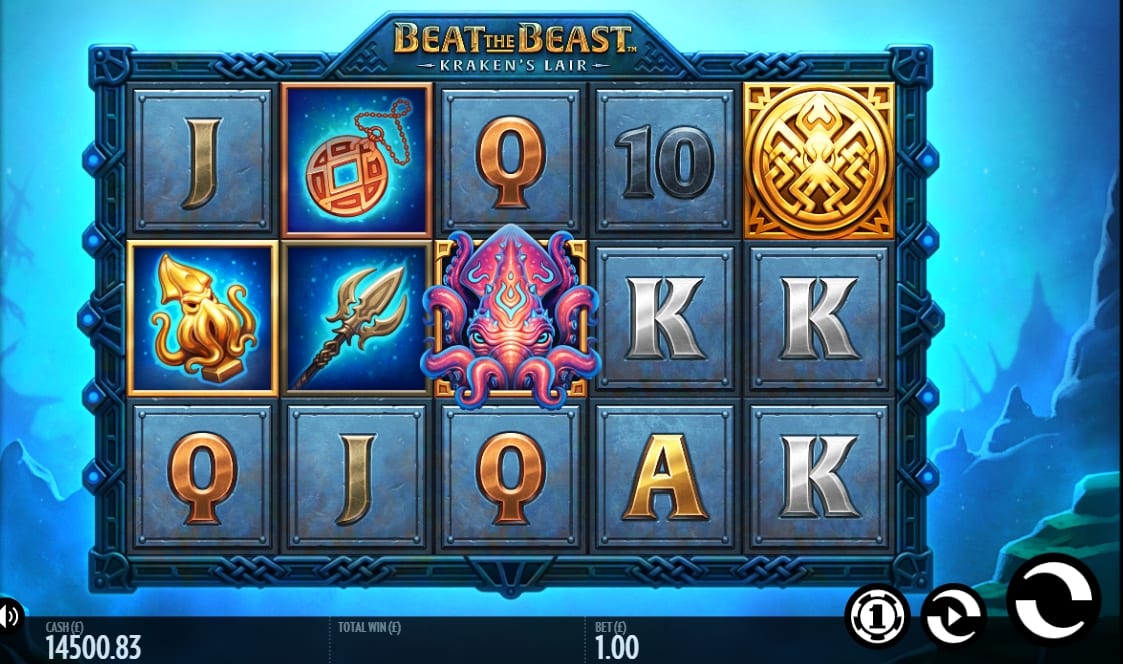 Fruity Slots have seen first hand the massive potential Expanding Wins brings to the game, when Josh hit an absolutely huge 2,300x win live on stream IN THE BASE GAME!

3 of the Kraken Emblem Symbols will land the bonus. The features that we see within the base game such as scatter pays and expanding wins are also within the bonus, however, a single Kraken Emblem will be randomly placed on the reels at the beginning of each spin.

To land some nice wins here, you’ll need this Kraken Emblem to be used as part of a win so that it expands the winning symbols creating those big hits. 3 or more scatters will re-trigger the bonus and will award an additional 10 free spins.

The style isn’t overly original and we’ve seen our fair share of Kraken inspired slot games, but nonetheless, Beat the Beast: Kraken’s lair is an absolutely brilliant introduction to this new series of games, and a classic style slot with a modern twist.

Thunderkick have started something that is sure to be a favourite amongst players, and being the first in a series of 5 Beat the Beast games, players can expect more of the same with an exciting new monster theme each time.

It’ll be interesting to see where they take the series, and hopefully we’ll see some new and exciting features in future games rather than just a different theme.

Kraken’s Lair may not be impressively innovative in terms of features, and certainly isn’t unlike anything we’ve seen in the past from other games, but the features it does have will keep you excited and captivated with Expanding Wins and an interesting Free Spins round.

Players can expect high volatility action from this game, which may put some off if you’re looking for more frequent wins, and excite those out to recover an abundance of treasure from lair of the beast.