Thunderkick are here with a Fishing trip to remember in Big Fin Bay Slot, where you can reel in a fish worth 15040x!

Thunderkick are now renowned for making top quality games. We’ve been on a hell of an adventure with the Beat the Beast series of games, and we’ve braved the weather with Riders of the Storm, but now Thunderkick have something a little more tranquil in mind.

A reward perhaps for all your valiant efforts?

Big Fin Bay Slot looks as serene as it comes, but that doesn’t mean there isn’t action and adventure to be had here.

Let’s head out to the bay and reel in that big catch.

Things look even more picturesque when you get the bonus, where you’ll then experience Big Fin Bay at sunset.

Some might say that the graphics of the game are grainy, but it’s actually a really nice aesthetic, with the background somewhere between a drawing and pixel art.

Thunderkick have most definitely taken a change of pace from previous games, but it’s a welcome change.

Beat the Beast was incredible, but the series has concluded now, and it’s great to see fresh ideas from Thunderkick.

Betting options in Big Fin Bay Slot are pretty much in line with your classic Thunderkick game, with options as low as £/€0.10, and as high as £/€100. With plenty in between, there’s definitely an option for all here.

The highest paying symbol in the game is the Captain, followed by the Red, Purple, Green and Blue Fish.

Low paying symbols are A, K, Q, J, 10 & 9. There’s also a Wild symbol that substitutes for everything except the Scatter Symbol. This is represented by the Golden Swordfish.

To connect a win, you’ll need at least 3 symbols to match on adjacent reels from left to right, starting from the left-most reel.

The ways to win can increase exponentially within the bonus, with up to 117,649 ways to win.

Big Finn Bay Slot looks very much like a Megaways, but it isn’t.

Could it be that providers are starting to realise that they don’t necessarily need the Megaways licence to make a game in this format, or similary format at least?

Well, Thunderkick never have, they don’t have a Megaways game in their portfolio as of yet, which makes them one of the few who do not.

Big Fin Bay has a couple of different features that will keep you occupied, as you wait for a bonus, and they may even result in some nice hits. 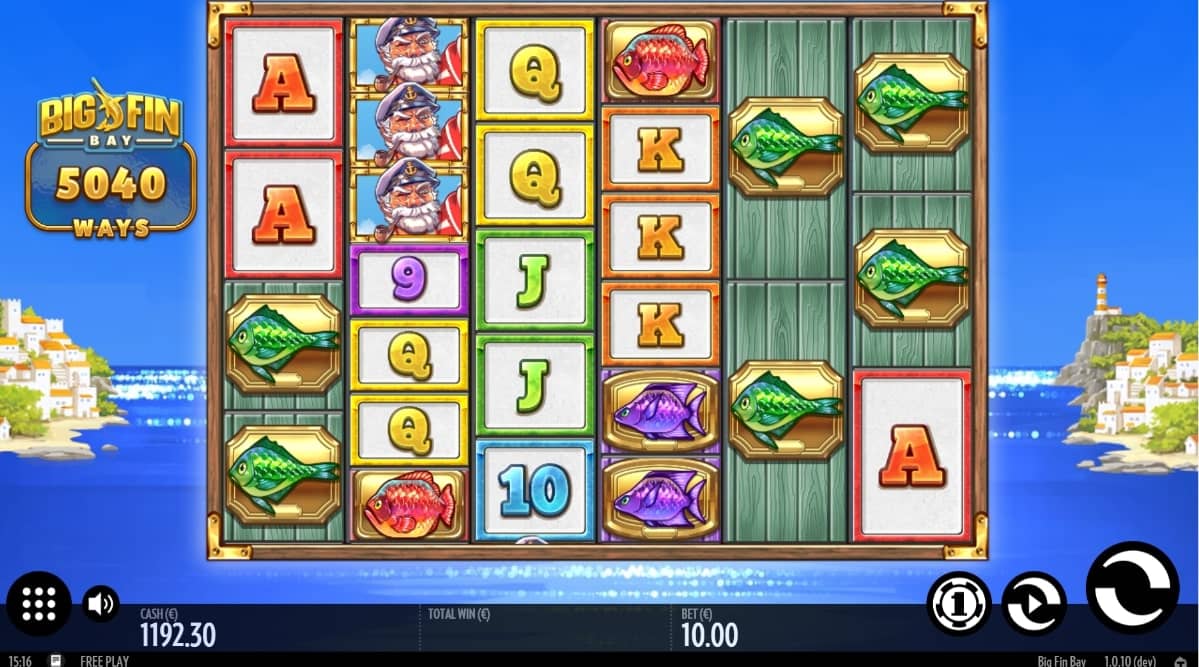 Mystery Wild is an exciting feature that randomly activates within the Base Game, with the potential to turn up to 3 reels Wild!

A good connection on a good symbol with 3 Wild Reels would certainly be cause for celebration, especially if you hit with the Captain top symbol.

Thunderkick aren’t quite done there though, Mystery Wild on its own is exciting, but so are Expanding Wilds…

In the Expanding Wilds feature, any Wild Symbol that is included in a win may expand to cover the entire reel, which will significantly increase the pay out of your winning way.

It’s good that Thunderkick have implemented a couple of Base Game Features.

They may not be quite as sought after as the elusive 4 Wild Reels in Riders of the Storm, but it’s still an exciting prospect.

Each reel that holds a Scatter symbol will award a random number of spins, up to a maximum of 6 spins.

More Scatters will give you a much better chance of more spins, with even one more giving you the potential for 6 extra spins.

Things get really exciting in the bonus. Wilds that land on the reels will expand and trigger a respin, as well as increasing the number of symbols on the reel by 1, which subsequently increases the ways to win.

The size of the reel post-expansion will remain for the duration of the Free Spins.

If a reel reaches its maximum height of 7, then the game will re-trigger, awarding +3 Spins 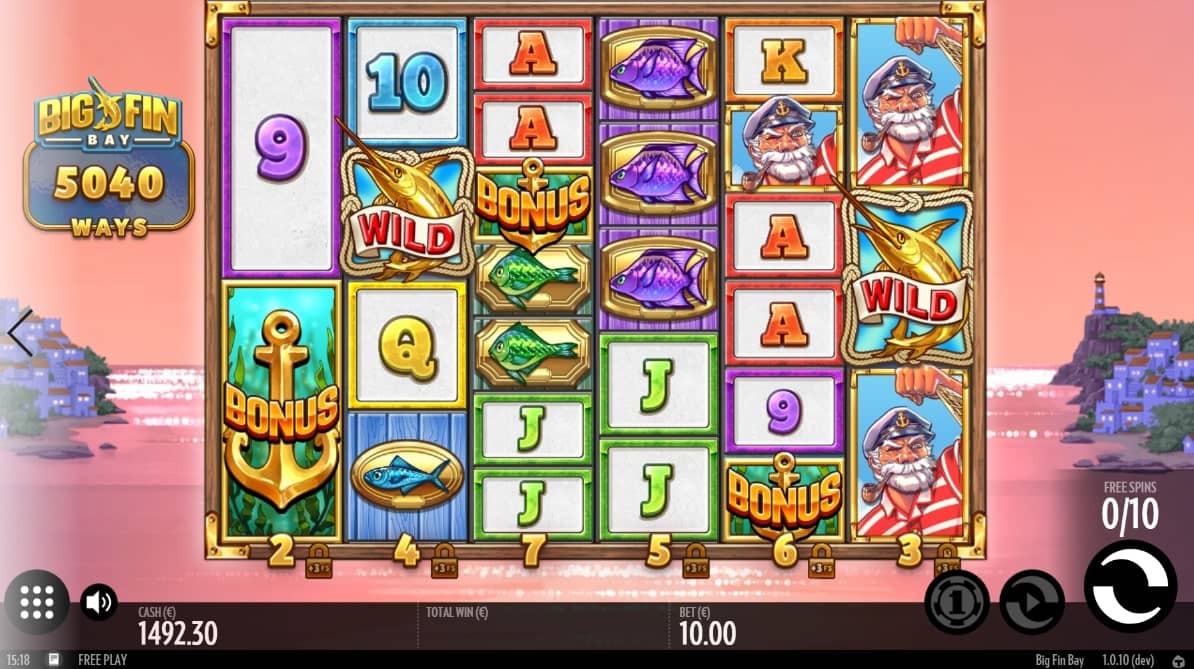 Big Fin Bay Slot looks to be a loveable and relaxing release from Thunderkick with the potential to go big.

The Bonus has many exciting differences to the Base Game with the expansion of the reels and up to 117,649 ways to win, and its evident that the game can pay through the max win stated by Thunderkick, which is a formidable 15040x.

The game has high volatility, which will sit well with those who find lower volatility games a bit dull, with a rating of 9/10.

The game could have done with some cascading reels to make it even more thrilling, but then it really would be similar to a Megaways game, and it’s evident through history that Thunderkick are avoiding Megaways, opting to go their own route instead.

Overall, Big Fin Bay is something you can really look forward to.

Consider it your reward for slaying a Kraken, Cerberus, Quetzalcoatl, a Sphinx and a Griffin.