Here we have another Playtech offering. Justice League Slot offers a wide variety of wagering options. Betting starts from as low as £0.01, rising to £50 per spin. You can also use turbo mode, to adjust the speed of the reels revolutions.

AutoPlay allows the setting of some spins automatically. The Spin button sets you on your way. It couldn’t be more transparent and more comfortable to play.

The game’s Wild is the Justice League logo. It can replace all other symbols bar the Scatter. Landing three or more Wilds creates winning combinations of its own.

Other game symbols include; the three Scatter symbols, which are the White, Bronze and Red Boxes. 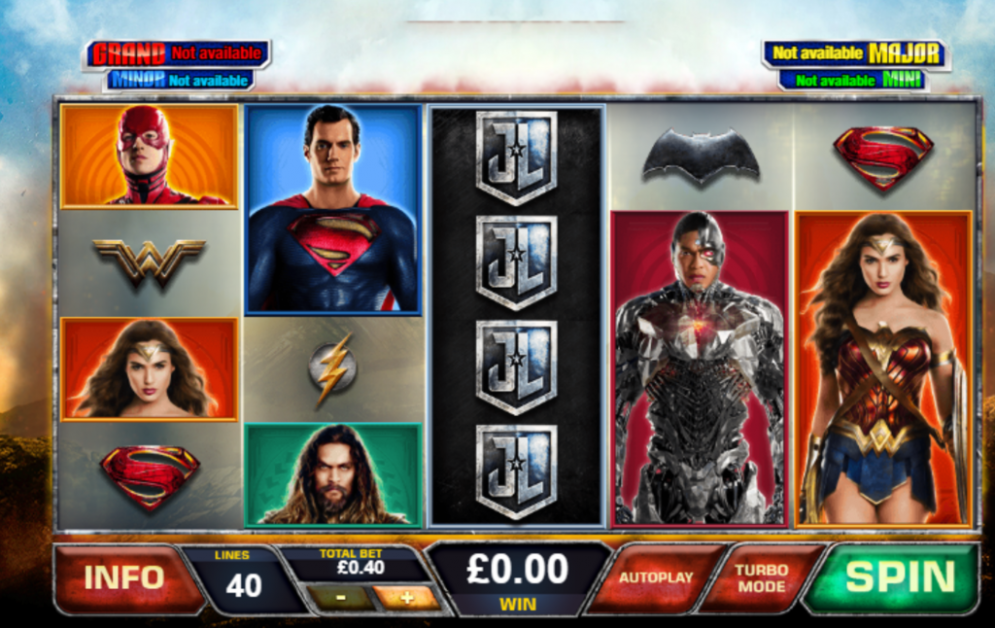 The flaming feature frame appears on one of the superhero symbols, subsequently turning it Wild. The feature may be re-triggered up to five times and can turn all the superheroes Wild!

The Scatter symbols can land on reels 1, 3 and 5. If you manage to land three of them, you will activate the ReSpins feature. A superhero will follow and protect you along the way, until the end of the round.

These superheroes also have the power to transform traditional symbols into Wilds. The Flash awards 15 Spins, the Cyborg 12, Aquaman gives out 10, Wonder Woman 5, and Batman gives out 2 ReSpins.

Every time the ReSpin feature is triggered, another superhero is unlocked. Whenever a superhero lands in the feature frame, it comes to life and gains its superpowers. Landing two or more Scatters during this feature gifts out three spins in any of the features except Superman and Batman.

There are four separate jackpots within the game, with different pot amounts. The Mini, Minor, Major and Grand Jackpots. They can be won at random and unexpectedly. The game is controlled by the buttons at the base of the screen. You can regulate the size using the Total Bet button.

Justice League is a great slot game which provides well above average entertainment and casino action in equal measures. The game flows fast and furiously, but never too fast to miss the forbidden pleasures of the game.

The casino action comes thick and fast, and the game works perfectly on a mobile device, be it a tablet, or smartphone, iOS or Android. The optimised mobile version has super graphics and crystal clear sound.

Try out Justice League, and feel the power of guts and glory, with our superhero friends.