Join up with the smirking, cheeky pirate captain on his hunt to steal and plunder immense riches and wins worth up to 5,000x your trigger bet. Pirates Plenty Slot is a feature-rich adventure that awaits you with a hidden treasure reel, valuable stacked multiplier wild symbols, as well as free spins.

Pirates’ Plenty is a very sleek and great looking slot game with rich and vibrant colours, intricate graphics, and stunning animations. The game certainly does not disappoint, and the theme is set inside a sunken treasure ship with an ancient oil lamp on either side of the screen sparsely illuminating the dim room.

During the free spins round, the image changes to reflect a sunken ship on the sea bed, with golden treasure spread all around just waiting for the crafty pirates to pillage, steal and plunder. The marching soundtrack, combined with the strange reel setup and win count noises, complete an atmospheric and stunning slot game. 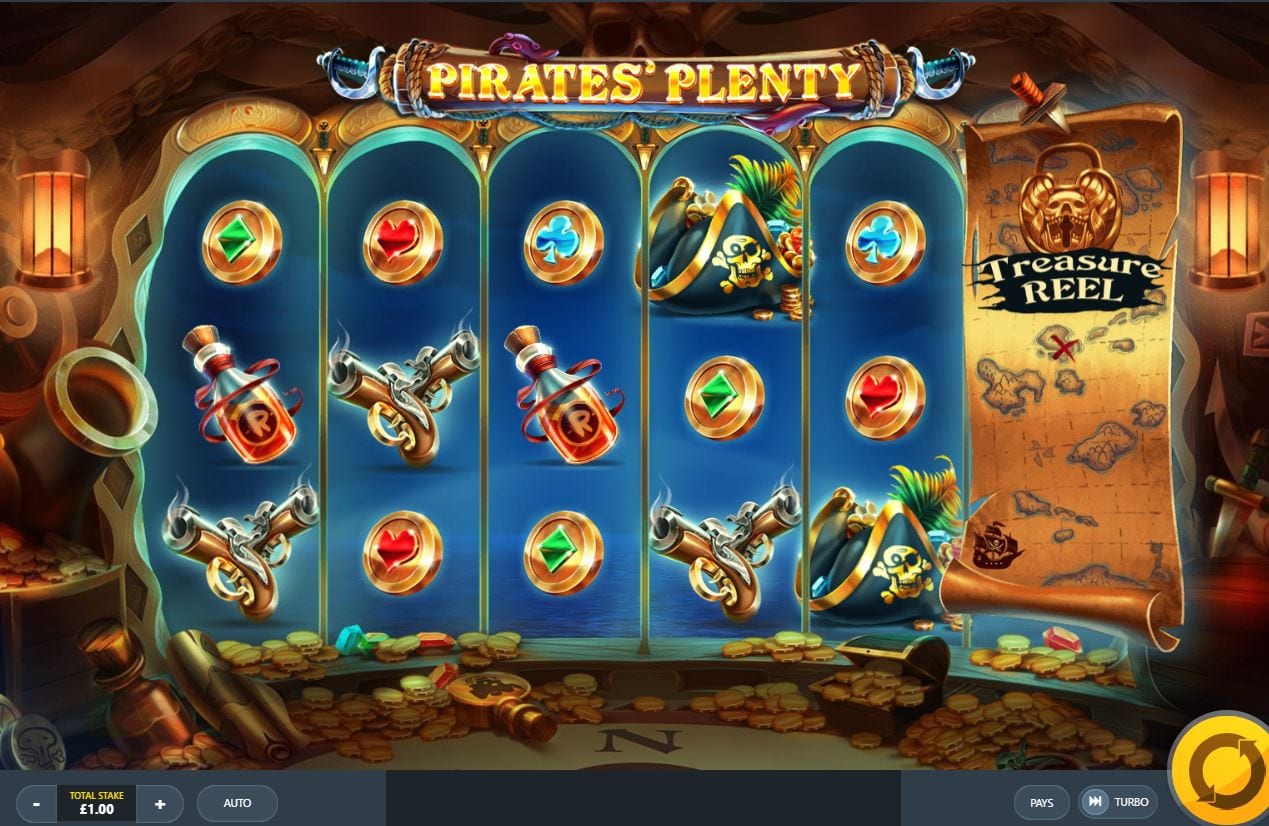 Pirates’ Plenty slot has an intricate design which continues through to the game symbols. The standard symbols include gold coins with high-value card suits, clubs, diamonds, hearts, and spades. The higher paying symbols take in a bottle of grog, an ancient pirate’s pistol, a cannon, the captain’s hat, and the evil pirates’ skull.

The last symbol appears in super stacks upon any spin, while all the others appear as single game icons, or in stacks up to 3 symbols high. The game incorporates more than one wild symbol, which are the monkey wild, the reel-tall ships within a bottle wilds, which appear during the base game. Extra wilds may be unlocked during the Ocean free spins games and Scatter represented by the round tile which is marked with Ocean Spins on it.

Pirates’ Plenty is an engaging video slot with 5-reels, 3-rows, and 20 pay lines. The slot game screen extends up to six reels once you unlock the impressive Treasure Reel. To join the captain and his crew with wagering, you can select from anything in between £0.20 to £100 a spin.

The pirate can reward you with payouts ranging from 0.8x to 20x your triggering bet for a single 5 of a kind line-up, which increases to 1.5x to 50x your trigger bet for six of a kind, once the slot game has opened up to all six reels. The game has an RTP of 96%, and using the AutoPlay function of the Pirates’ Plenty slots can set up 10 to 100 automatics spins.

The Treasure Reel features prominently on the right-hand side of the game screen and displays an ancient treasure map with a marker for the exact hiding place of the treasure. You will need to unlock it for each bet size by hitting the map symbols within the base game. The pirates’ ship will advance on by one step for each additional symbol that lands on your reels after a spin, and it takes an average of around 200 spins to reach that target.

Your game progress is always saved for each bet size, so once you unlock the feature, the grid increases to 6-reels and reel-tall Wild bottle icons will be added on to all of the other reels. Each wild symbol is marked with multiplier value ranging from 1x to 5x whenever it lands after a spin, and the increased game window is saved for every subsequent bet size.

Watch out for the cheeky thieving monkey, as he can appear randomly after any spin during the base game to steal all the gold coins with low-value symbols from your reels. The higher-value symbols will then drop in to replace them, while the monkey turns into a wild icon.

10 Ocean Free Spins are awarded when you get a minimum of 3 Scatter symbols to land on the reels. The feature is played on 5-reels as long as the Treasure Reel hasn’t been unlocked yet.

The bonus round cannot be reactivated; however, you can win many more free spins when you open one of the treasure chests. 3 treasure chests with increasing sizes are then added on top of the game screen, and any pirate captain icon that lands on your screen will award you one key.

3 keys are needed to open every chest containing symbol modifiers along with as many as 5 more free spins. Unlocking the initial two treasure chests will provide you with one low-paying card suit icon per treasure chest which is transformed into a wild for the remainder of the free spins round, and you also get two and three extra free spins respectively.

By collecting 3 keys, you can open the last chest, which will transform the remaining two card suit symbols into wilds, also awarding 5 more free spins. With so many wilds landing on the reels, that is the right moment to hit some vast, mega wins playing Pirates’ Plenty slot game.

The mobile game is just as impressive as the desktop version. It works well on all major operating systems and mobile devices and is fully compatible with iOS, Android, and Windows mobile phones and tablets. The slot can be easily and quickly be downloaded to your mobile device, or PC.

Alternatively, you can play using Instant Play mode, with no waiting or downloading required. The graphics come across clearly and vibrantly on a smaller screen, and the mobile game is intuitive and enjoyable to use, plus it loads up quickly to your device.

Pirate’s Plenty online slot is a well structured and designed slot game with lots of positives and special features. The bonus rounds are exceptional, and they work well on any mobile device along with the game itself. This pirate-themed game promises fun and entertainment and delivers in bucket loads with lots of great features to bring home that plundered and looted treasure.

Not only is the slot game very well designed but it comes with a maximum winning payout potential of up to 5,000 times your stake. So get your pirates’ gear on and prepare for the voyage of a lifetime playing Pirates’ Plenty slots.