Reel King Mega Slot replaces Novomatic’s epic Reel King, and this new version is released by Red Tiger Gaming. There are significant improvements to the immensely popular arcade-style game, and it is much better and bolder. The game works on mobile and desktop, and once you activate the in-game mini-slots feature, you are guaranteed wins of up to 500x your stake.

The King’s Crown randomly bounces around your screen during any spin thereby turning other symbols into Wilds. Reel King Mega video slot utilises 5-reels with 20 pay lines and betting options are various, starting at 20p, rising to a max of £100 per spin. With a low to medium volatility, the RTP is set at 96% so you can expect frequent payouts.

The background is a park scene possibly in a royal palace or mansion, and there is a red hue with stashes of gold coins. The reels change colour from white and blue, to yellow, and they play a crucial role in helping you trigger the Reel King bonus feature. The game symbols include a familiar collection such as cherries, plums, tens and jacks at the lower end. Getting 5 similar icons on a pay line wins a payout of 2x to 3x your stake.

The Queen, King and Money Bags images pay out 5x to 25x your bet for landing all 5. The Wild is the Jester’s Hat, and it can substitute other symbols except the Scatter to create wins. All the symbols including the Wild can grow to a super symbol size of 2×2.

Reel King Mega Slot features include the King’s Crown located above the game logo. With each spin, it can appear and transform other symbols into Wilds. You can expect to get about 3 to 4 swapped Wilds, and your winnings are evaluated and paid out after the full transformation. If you get a whole screen full of Wilds, you can win up to 500x your stake during the base game. The best bonus is the Reel King feature, which starts up when all the reels are highlighted in yellow as they stop spinning.

You can get as many as 5 Reel King characters appearing randomly, one per reel and expanding into a mini-slot game with 3-reels and one pay line. During the mini-slot game, you get Seven symbols in blue, yellow and red along with blank spaces. Combinations of differently coloured Sevens pay out 2x your stake, and 3 blue, yellow or red Sevens pays out 5x, 10x to 25x your bet! The highest payout you can get during the bonus round is 500x your stake. 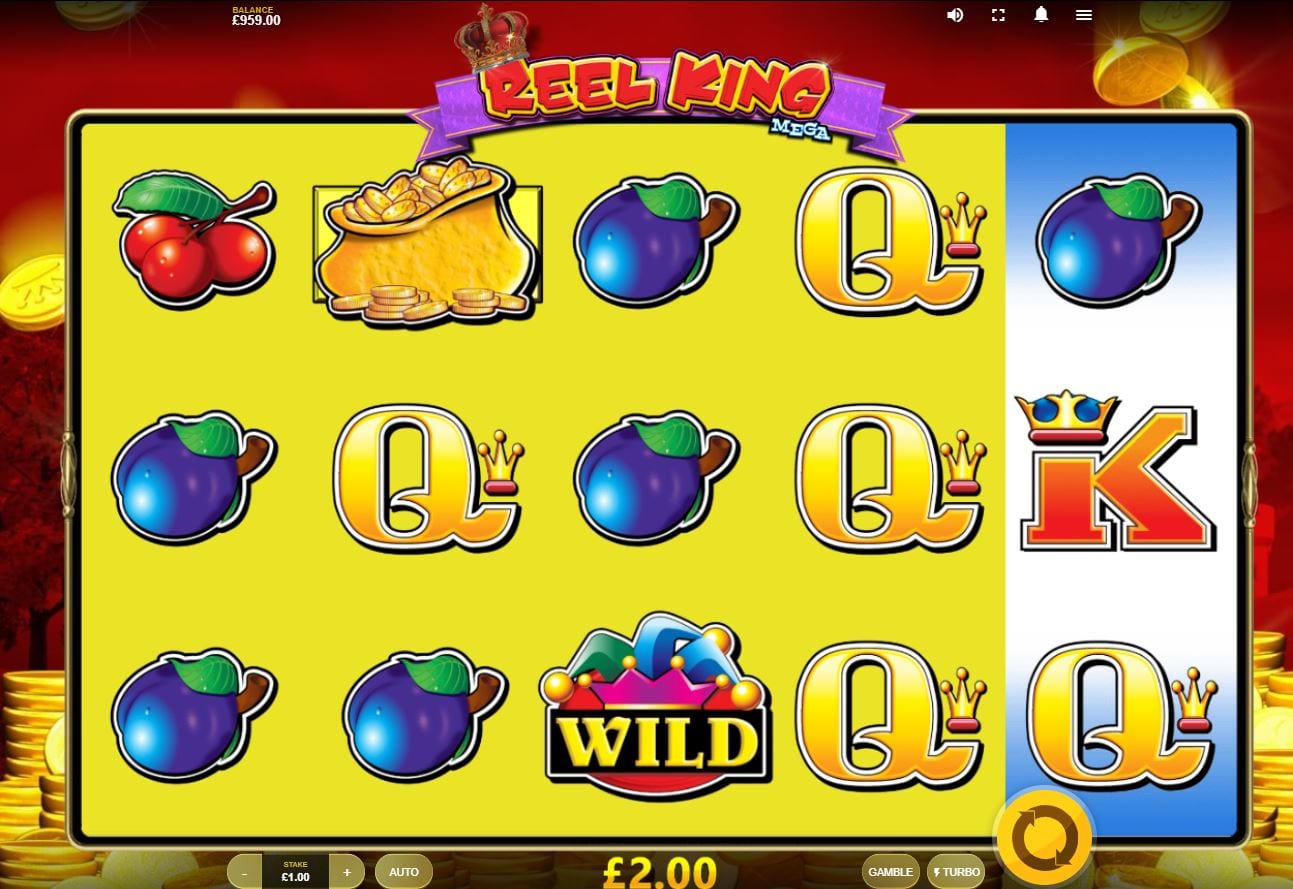 Reel King Mega is a classic that has been transitioned and improved. You can play the game on your mobile device wherever you are, and the low volatility can provide you with long playing sessions on a small budget.

Reel King Mega has a brilliant winning potential, a simple, clear and sleek visual appearance and the special features can head your way with any spin.

The royalty led theme is inspiring and pleasing as you spin the reels, and the Jester Wild symbol helps to create more chances. With the King’s Crown and Reel King features, the game is never short of excitement and winning opportunities!