Fantasma are an up and coming developer, who strive to bring the gaming experience into the world of gambling, and boast of extensive knowledge built up over the years resulting in an experience that goes beyond gambling.

Serpent Shrine is no exception to this rule to create a compelling game, and the extensive backstory brings life to the theme amidst a world of slot games often unexplained.

Groups of explorers find an ancient forest, and get lost, searching seemingly forever among darkness before they finally see the light. The light that greets them was not the familiar and welcoming shine of the sun, but an unknown source, illuminated by crystals.

Although the crew had been on a harrowing adventure, their need and hunger for exploration overcome them as they set to explore this strange place. Profoundly, Fantasma wraps up the dialogue by saying that no history book would ever tell of the wonders they found, nor the creature that in turn found them.

Reading the synopsis for the game already has you interested from the off. Could you be the one to venture beneath into the darkness, and will the history books write of you as you emerge alive, from the Serpent Shrine?

The theme for Serpent Shrine looks well designed and interesting. In the background, an illuminated Cave inspires wonder, with luminescent flowers, trees seemingly defying their need for the sun as they grow in a desolate location beneath the earth.

The music is also good, with an air of wonder and a little bit of horror to it.

Serpent Shrine has 5 reels and 7 rows, but not all are active straight from the start. At the start of any new spin, the layout will be 2-3-3-3-2, and more space can be cleared up by activating some of the in-game features covered later in the review.

High paying symbol is the fearsome Serpent, with the other 3 high paying symbols comprising of the skeletal remains of what is presumably the explorers with a curiosity that killed them.

There are 3 medium paying symbols, which are made up of precious looking gems, and low paying symbols is a lantern, map and hammer, tools of the aforementioned curious explorers. A wild exists within the game that substitutes for all paying symbols

Betting options are impressively extensive in Serpent Shrine. Your lowest available bet is 0.20, and the highest is 100. Between the two, there are a multitude of different options that will cater for all types of players.

The Base Game of Serpent Shrine Slot

Serpent shrine is played on 108 – 16,807 ways to win. A win occurs when 3 or more identical symbols land on consecutive reels from left to right. 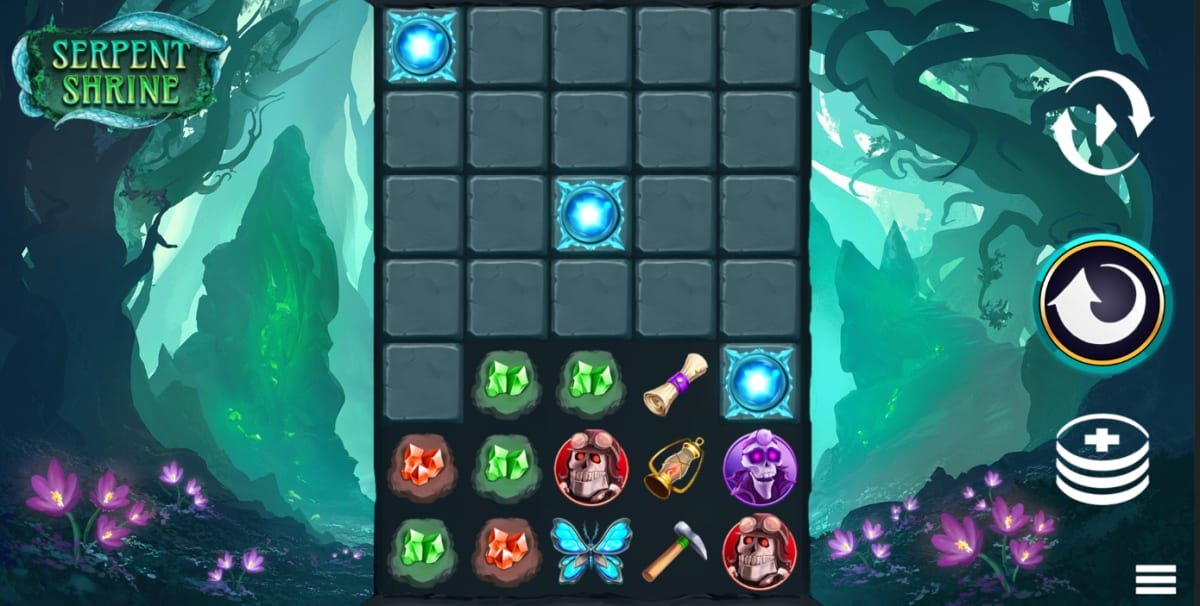 The Bomb Feature is activated when a Bomb symbol position is unlocked during the Butterfly Feature.

When a bomb symbol is unlocked, the bomb will explode and unlocks all blocker symbols that are horizontally or vertically adjacent.

If a Respin is awarded, a new Butterfly Wild symbol is created for every explosion and will be placed at a random unlocked position on reels 2-4 at the beginning of the next Respin.

When all reels are unlocked, 5 Snake Free Spins are activated.

During the Snake Free Spins, all wins are multiplied by a multiplier, which will start on 1x and increases with each spin. During the bonus, the snake will appear at the top of the reels, and will move down the reels with each spin. Covered positions will not be considered in winning combinations.

If a Butterfly Wild lands, it will attack the snake. The first two attacks destroy one of the snakes two teeth, and the Snake covers one less position on the reels for the rest of the spins. The third attack kills the snake, ends the Snake Free Spins and starts the Super Free Spins

2 Super Free Spins are activated when the Snake is killed.

During Super Free Spins, all wins are multiplied by 100x, and all positions on the reels are unlocked, meaning that the game is played with 16,807 ways to win.

Serpent Shrine is an innovating and captivating game that everyone should try, and has lots of features in play. The base game may start off a little dull, but with Butterfly and Bomb features, the game can soon open up for bigger wins, making the game a lot more interesting

The Snake Free Spins is an exciting concept, with a 100x multiplier up for grabs, and the fun doesn’t end there. If you’re lucky enough to land Butterfly Wilds and kill the fearsome beast, you’ll be awarded that much desired Super Free Spins where the 100x multiplier is standard.

Everything about the game screams that the game was developed lovingly, with the player in mind, and the backstory and theme of the top UK slot is an interesting one, and is much appreciated in aiding with that added immersion.

There’s a 10,000x maximum win up for grabs, which is huge no matter what stake you’re playing with, but you’ll need to fight tooth and nail to get it, the snake is not one to be messed with.

High volatility action will please most brave enough to venture into the Serpent Shrine, and may even appeal to those looking for that compelling gameplay that we all love from our games.

Overall, Serpent Shrine is a delight to play. Not every bonus will see you standing victorious over the Snake as you emerge from the shrine with a pocket full of change.

Live to fight another day as they say, and unlike the explorers, you’re ready to get back in there and take the fight to the snake once more.