Thunderstruck is one of the most successful online slots of all time, and the Thunderstruck II Slot builds on this success, by adding better features and even more enjoyable gameplay.

It’s made by Microgaming – the world’s largest online casino software provider – so you can be sure that it’s absolutely fantastic, and the prizes can be massive, especially if you manage to spin in the jackpot of £2.4 million! 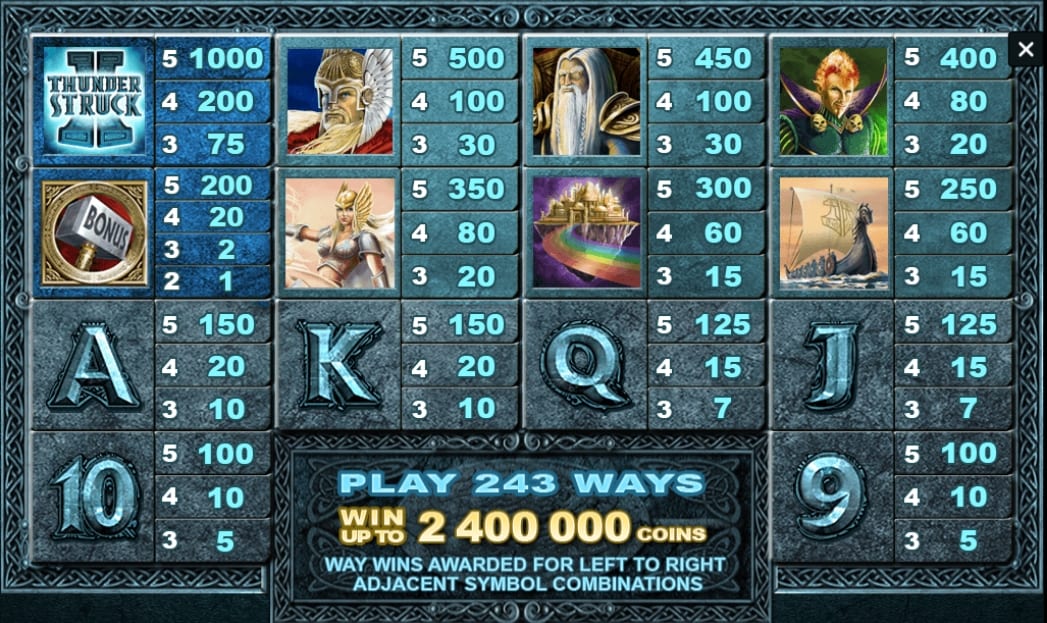 The Thunderstruck II game has the same theme as its predecessor, namely Norse mythology and the gods worshipped by this ancient civilization. Four gods are found on the reels – Thor, Odin, Loki and Valkyrie – and all symbols have been created with lots of care and attention.

You’ll find five reels in total, with 243 different ways to win spread across them, therefore meaning you’ll have a great chance of winning every time you spin the reels of the Thunderstruck II mobile or desktop slot.

The minimum bet amount at Thunderstruck is £0.30, while the maximum possible bet is £55. When choosing how much money to bet, remember that the more you bet, the higher the potential prizes will be. Of course, don’t bet more than you can afford though.

The maximum prize at Thunderstruck II is massive, as it comes in at an impressive £2.4 million! This is more than most other online slots can offer, including many of the progressive jackpot slots found at online casinos.

This huge jackpot can be won if you manage to activate one of this slot’s many bonus features. In the base game, the highest paying symbol is the game’s logo, followed by the four different gods. 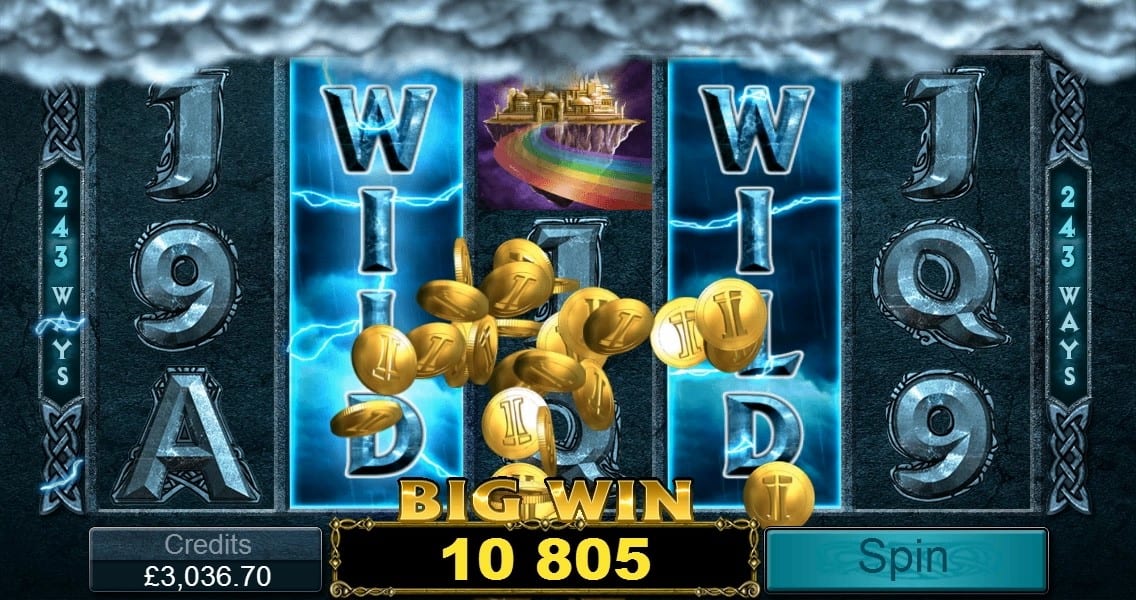 The first Thunderstruck II bonus to mention is the wild symbol, which is represented by the game’s logo. This wild symbol has a great feature attached to it, as it will add a 2x multiplier to any win it is part of.

There’s then the exciting Wildstorm feature, which can be randomly activated at any point. When it starts, it will turn up to five positions on the reels wild, therefore giving you a much better chance of spinning in a win.

There are then four main bonus features, and they are all activated by getting three or more hammer symbols on the reels. The more times you activate the bonus, the better the bonus will get. The first one you’ll receive is the Valkyrie bonus, and this sees you getting 10 free spins with a 5x multiplier.

Then there’s the Loki bonus, where you’ll get 15 Thunderstruck II free spins, with Wild Magic symbols on the reels, which transform other symbols into identical symbols.

Next up there’s the Odin bonus. This sees you given 20 free spins, and you’ll often see ravens flying onto the reels, which will turn symbols into multipliers. Finally, there’s the Thor bonus – the best of all the bonuses – which leads to 25 free spins, during which Rolling Reels are active.

This means that winning symbols will fall from the reels and be replaced by others, potentially allowing you to win again.

If you want to play Thunderstruck II no deposit bonuses can be found at many sites, and these are a great way to play this slot for free. Why not find out about the best no deposit bonuses by reading through our many online casino reviews?