The ultimate battle between two gods is brewing in 2 Gods Zeus vs Thor Slot. Who will come out on top in this exhilarating battle, god of the sky Zeus, or god of thunder Thor?

This particular instalment is powered by Yggdrasil, but the brains behind it are 4theplayer, who are a new, exciting studio looking to push the boundaries of how we enjoy games today, boasting innovative features unseen elsewhere.

With their other captivating release, 6 Wild Sharks 4theplayer are definitely looking promising with their inventive and bold approach to games, and a rousing battle between two titans is sure to pique the interest of us mere mortals.

Battle of the Gods

Mythology has always, and probably always will, be a favourite theme among game providers and for good reason. People are fascinated with both Norse and Greek mythology and the gods associated with them.

In this slot, we’re dealing with father of the gods, Zeus, and the mighty god of thunder Thor.

The background is halved, the red corresponds with Zeus, and the blue with Thor, who are both seen squaring off with each other on their respective sides of the reel, sides belong to each god translates not only to the theme, but into the gameplay which we’ll cover later.

Symbols also double up in theme to represent both gods with various Greek letters and Norse Runes. So far, it all looks very interesting as these deities’ lock horns.

There are 14 regular paying symbols in total, with 2 of the ‘same symbol’ present twice for each god. These include Greek and Roman helmets, ships, beats such as Cerberus and Fenrir, and two goddesses with each siding with one of the gods.

Wilds are also present, in the form of Thor and Zeus Wilds which substitute for all but scatter symbols.

The game provides a rather small range of betting options, with the lowest being 0.10 and the highest being 20. The ‘small’ highest bet might not appeal to players who like to live dangerously, and is much lower than that we usually see.

Still, don’t let this put you off, a maximum win of 15,630x is still up for grabs and is formidable, no matter what stake you’re playing on. 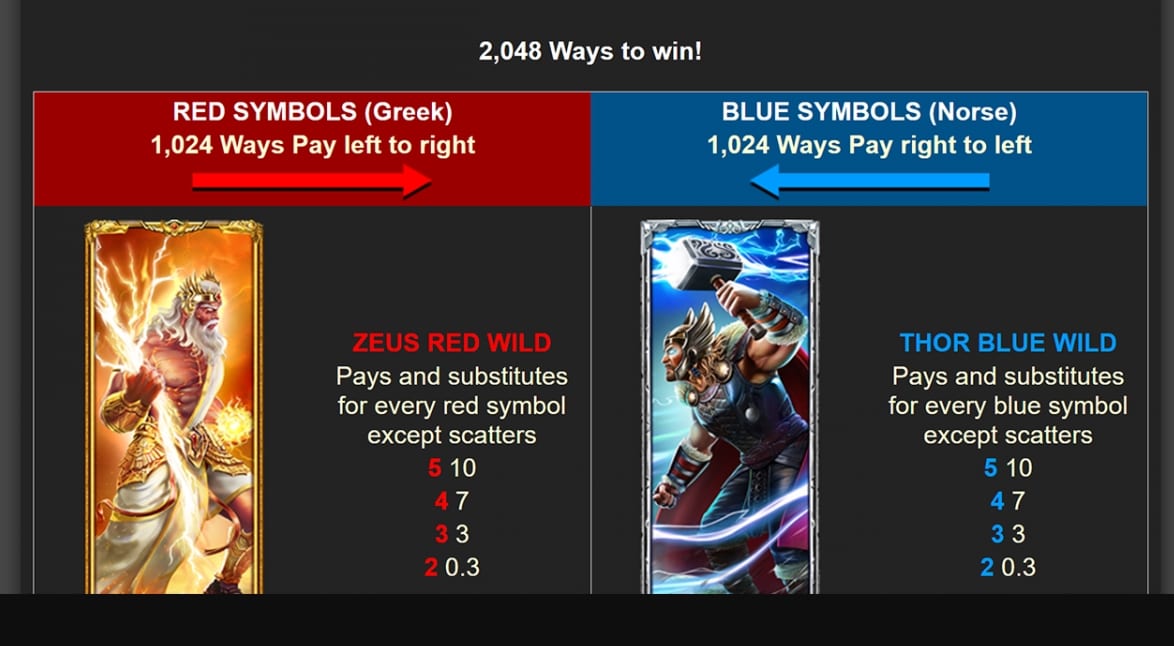 As mentioned, wins pay left to right and right to left, and you’ll need 3 or more to form a winning combination. A new and interesting way to play is 4theplayer’s new Dual Spin Mechanic.

The Dual Spin mechanic introduces two spin buttons, one of which is red, and the other blue, both of which is representative of Zeus and Thor.

The way it works is simple, each spin you are able to choose red or blue, and if the winning combination matches the button that you pressed, then you’ll be awarded double the pay-out.

How does one pick between an immovable ‘object’ vs an unstoppable force? Who knows, but you’ll have to pick one, and pick wisely if you want to double those wins.

3 scatters need to land anywhere in view to trigger the casino bonus. As with any other symbol in the game, the scatters can have either a Greek or Norse theme, representative of both the gods.

The amount of spins you’ll get will depend on which of the Dual Spin buttons you press. If at least two scatter symbols match the colour of the button you pressed, you’ll get 10 spins, if it doesn’t, you’ll get 7.

Every spin in the bonus is guaranteed to win, and features a progressive multiplier. The Dual Spin button is once again active, and your multiplier will increase if you choose a button that matches the winning combination.

Re-triggering is also possible in the bonus, with no limit to how many times it can re-trigger, and you’ll need 3 scatters once more to obtain them. Once again, picking the right button will award either 7 or 10 spins, as it does when you initially trigger the bonus.

Our Verdict of 2 Gods Zeus vs Thor Slot

4theplayer are once again proving that they can go against the grain to provide a new and innovative experience for players. It’s great to see developers challenging the conventional and safe idea of what makes a game great, and implementing something different.

The theme isn’t exactly that original, mythology has been rinsed time and time again in various different slots, but at least this has the added twist of two gods from two different mythologies, with the added excitement that they’re against each other.

The dual-spin mechanic might seem a little confusing to some who like to play something a bit more original, and might not appeal to those who would rather let fate decide for them, but to others, it’s a different and really fun way to play as you pick a side with the mighty gods.

The free spins feature is interesting, and a guaranteed win every spin will leave everyone hopeful of landing that big hit, but you’ll once again need to pick a side which each of the gods in order to benefit from an extra multiplier.

On the downside, if the dual spins feature isn’t enough to keep you captivated, then you’ll be wanting of a bonus to see some excitement.

There’s a solid RTP of 96.5%, so in theory, you should see a fair amount of your bets returned over time. That being said, the game is high variance, so you won’t be inundated with big wins all the time.

The game has a huge possible win of 15,630x, and those that achieve that, or anything like it, might feel as if they’ve risen to the rank of god themselves, becoming the god of slots…Still, don’t try and pick a fight with Zeus or Thor.

Overall, it’s a solid release again from 4theplayer, who continue to impress with their vision to induce innovation into their games.