Things are getting hot in the underworld. Thunderkick have delivered on the 3rd Instalment of the Beat the Beast series, and it promises to be just as terrifying as ever. This time we’re tangling with the Hound of Hades, with Beat the Beast Cerberus Inferno Slot.

Thunderkick have been really consistent so far this year with their releases. First of all we had Beat the Beast: Kraken’s Lair, Followed by Beat the Beast: Mighty Sphinx, each of which came with their own flavour to add to the series.

Aside from these, Thunderkick have done a great job in releasing some other really fun and captivating titles with Pink Elephants 2, and the explosive Riders of the Storm. 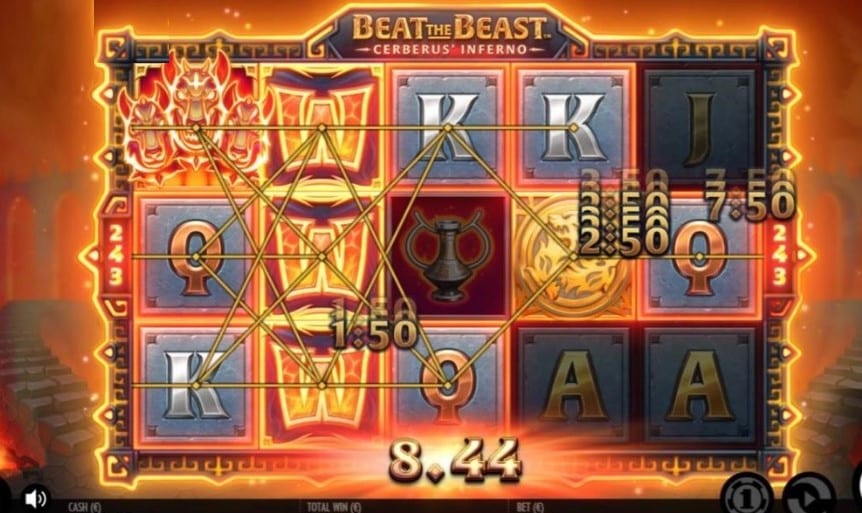 The Hound of Hades

Derived from Greek Mythology, Cerberus is the monstrous 3-headed watchdog of the underworld tasked with guarding the gates to stop the dead from leaving, and an ideal candidate as any to be the figurehead for a Beat the Beast game.

He may stop the dead from leaving, but nobody said anything about the living entering, and as we enter we notice that Thunderkick have done a great job in setting the scene for this one.

Cracks in the ground glow red and molten lava shrouds every structure in sight in the grisly underworld, and the music is as dramatic as you’d expect when a face-off with the only dog you never want to play with is imminent.

Beat the Beast: Cerberus’ Inferno is a 5-reel, 3-row video slot with 9 traditional pay lines. Betting starts from as little as 0.10 with the highest bet available at 100, so there’s truly an option for everyone.

There are 12 symbols in total, counting two different types of wild, one of which is also a scatter, with a top symbol as you’d probably expect to come in as Cerberus.

Other premium symbols, of course, are present, and each is various items with a Greek sort of style and origin. Low symbols are A, K, Q, J &10.

The Base Game of Beat the Beast Cerberus Inferno

Much like the preceding Beat the Beast games, the base game is quite simple and there isn’t a lot going on in the way of features. That being said, players will definitely appreciate the classic style at play here.

Scatter Pay has made a return for this instalment, the scatter symbol is represented by a golden Cerberus Emblem. This symbol also acts as a wild.

Scatter Pay is a welcome feature in any game and gives the game much more potential. Landing 5 of these will be very lucrative for your balance, and this is before the bonus that comes with the scatter has even started.

As previously mentioned, two types of wilds exist in Cerberus’ Inferno, one of which is the golden Cerberus Symbol which will substitute for any symbol and the next is the stacked wild. On any spin, one or more Stacked wild may appear and will cover the entirety of the reel.

This yet again gives the game a lot of potential for the big base hits, and you’ll be laughing if you land the top symbol when it happens.

3 or more Cerberus Emblem Symbols will be needed to land the bonus and the reels will disappear briefly while you have a stare down with Cerberus himself, ready to take him on.

During the bonus the game does something quite interesting, and ditches the 9 set pay lines that is active within the base game and instead turns into 243 ways to win.

This means that 3 or more symbols on adjacent reels starting left to right will count as a win regardless of their position on their respective reels.

Aside from this new way to play, the rules of the base game such as Stacked Wilds or Scatter Pays/Wild will apply. However, with 243 ways to win instead of 9 pay lines, these base game features will be a lot more effective in racking up those bigger numbers.

The style of this game is interesting and well-articulated. Each one of the Beat the Beats games are similar in nature in terms of gameplay with slight differences.

The RTP is a little higher than both previous instalments, ever so slightly that is, and the maximum win is less so than what we saw in Krakens Lair coming in at a maximum of 6,666x.

It offers the classic pay line slot experience, and although games are rapidly evolving with new, quirky and crazy features, the love for this kind of classical simplicity never went away.

Those who enjoy any of the previous Beat the Beasts games will find this embraces some of the same formula that made them good, with its own little spin. On the other hand, the game can be considered somewhat ‘vanilla’ in terms of features, even compared to previous instalments, so some may find it a little mundane if features are what you’re looking for.

The Whole Series is Spot On

Thunderkick have done well so far with the whole series, but face the challenge of giving us 2 more new and exciting games which will need to be as exciting as the ones we’ve seen so far, but more so than this, and not so much more than the older ones become irrelevant.

Overall, it’s a classic slot with that modern twang and will be enjoyable for a while, but we feel like others in the series may be a preferable option.