Remember Beavis and Butthead? The 90s MTV icons are back with a bang in Beavis And Butthead Slot. Those were the times when MTV was the premier and only music TV channel. Beavis and Butthead were two mischievous and lazy heavy metal fans always ready to criticise often with hilarious consequences.

The animated series became a cult adult sitcom in the 1990s, and a generation of youngsters was brought up with the show, which aired for eight long seasons. The idea to transform Beavis and Butthead into a slot game is an inspired idea and works superbly.

The game has just been released by Blueprint Gaming, and the video slot has a typical structure with 5-reel, 3-rows with 20 pay lines.

The game has a mobile optimised version which is adequately compatible with all the latest mobile devices including iPhone, iPad and Android operating systems, and the betting options are pretty broad-based, ranging from a few pence, up to a much higher amount that will suit high rollers.

So let’s have a look what the two boys have in store for us, shall we? 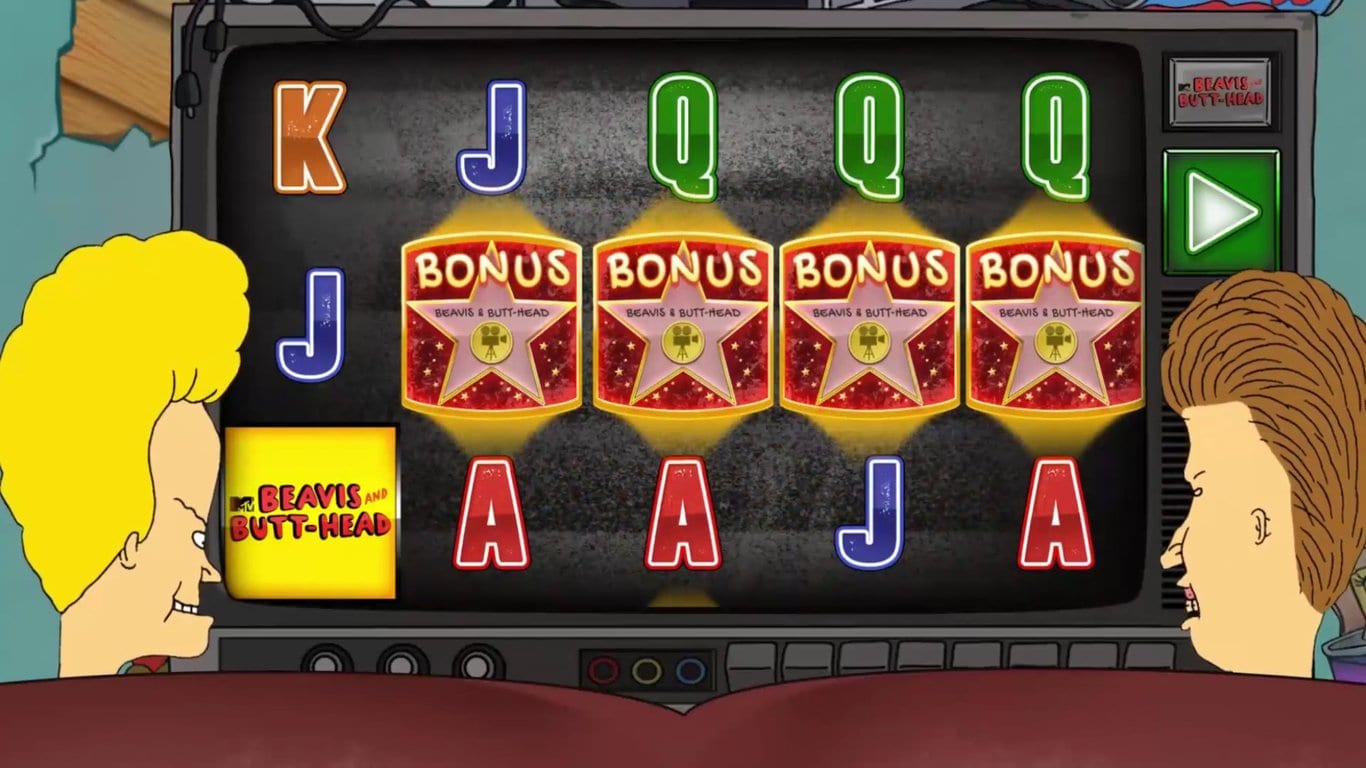 The game backdrop has the two characters sitting on their couch watching TV as usual, and the reels are cleverly integrated into the TV screen. The symbols blend into the theme gracefully creating a brilliant theme and background beyond the reels to keep everyone interested.

The game has a few really unique features with bombastic names. You get the Cornholio Wilds, So Nacho, Butt Flambé, Some Like it Hot, Die Fly, Die and Colossal Couch Fishing. In fact, Cornholio is Beavis’ alter ego, and he will activate full stacked wilds.

During the Colossal Couch Fishing feature, Butt-head grabs his fishing rod and catches a 3×3 colossal that generates a massive, giant symbol.

So Nacho is a cute and amusing feature whereby Butthead attempts to open a bag of nachos which subsequently explodes into mystery symbols randomly appearing on the reels. The Butt Flambé feature is the best of the lot, and it sees Beavis pouring hot sauce and generating a flaming fart activating the round.

The Some Like it Hot function serves up both our friendly fools hot sauce that makes them burp hot flames leading to Free Spins.

The Die Fly, Die feature is triggered when Beavis and Butthead smack their TV set with the fly swatter. They subsequently turn into Wilds and award high payouts. Once the Sofa Slug fest feature is activated, symbols start trickling down onto the reels, thereby replacing others to create great winnings.

All these features can be triggered when you get three Scatters on the reels. 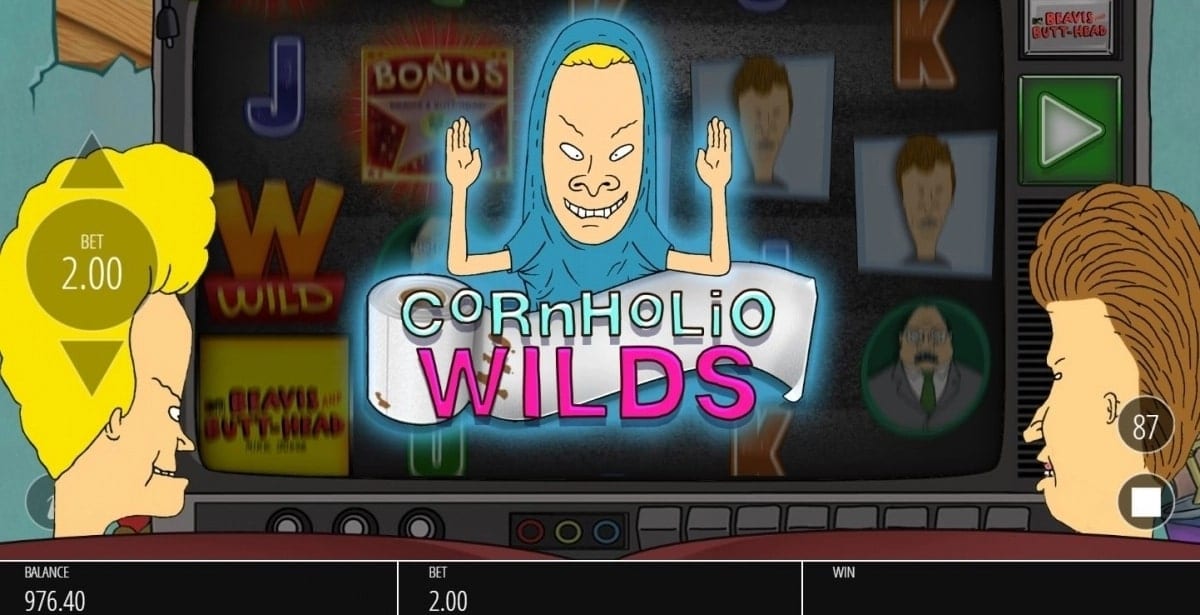 The game also comes with an additional 6 Bonus features which are accessed via the Couch Your Cash modifiers or when you get 3 or more Hollywood Star bonus scatter symbols anywhere on the reels. You are presented with 6 filmstrips to choose from with each one revealing a Mystery Win cash prize.

The Feature Gamble offers you the option of playing or picking again. The 6 bonus rounds consist of Don’t Be A Buzzkill Bonus. Here you need to choose either Beavis or Butthead with cash wins or buzzkills.

There is a meter for buzzkills, and the feature ends when it fills up. The amusing Customers Suck! Bonus takes place in the burger joint where the boys work. As you choose food items, they match up and reveal multipliers.

The To ‘B’ Or Not to ‘B’ Free Games round offers the chance of winning Super Spins by collecting tokens, and Wilds with each spin. The Maxi Mart Free Spins also uses the token system and when the Maxi Gulp Wild symbols reappear, they stick to their position for the remainer of the spins.

The Great Cornholio Free Spins uses the token feature too, and you get re-triggers and passage to the Just Desert Bonus round.

There you pick icons along a desert trail and win cash prizes. If you land on the Oasis position, then you win a mystery award. Reaching the Super Big Money allows you to pick a Super Big Money multiplier that is added to your total wins.

You will need 5 bonus Scatter symbols to trigger this last feature unless activated via the Feature Gamble or other bonuses.

Symbols of a Generation

The game is full of iconic symbols of a generation including characters from the show, like the hippie teacher David Van Driessen, the school Principal McVicker, and of course our two heroes Beavis and Butthead. The lower paying icons include playing cards, namely Ten, Jack, Queen, King and the Ace card.

The highest paying icon is the game logo, which gifts you 25x your triggering stake if you get all 5. The Wild symbol can replace others except for the Scatter and Game Logo.

Beavis And Butthead Slot has 5-reels, 3-rows and 20 pay lines creating a comprehensive range of betting options starting from 10 pence, increasing to an incredibly high £500 a spin! The various coin sizes can be placed on the pay lines, and you can use the control buttons to set your bets accurately.

The Auto Play function is a useful addition as it allows you to set a large number of spins.

You will hardly find a slot game with more bonus features than Beavis and Butthead. There are 8 reel modifiers and 6 bonus rounds, and you can win a high prize payout up to 10,000x your triggering stake! The theme is a pleasant change from the usual, and the design and symbols are spot on!

With a wide variance of betting options, all players can enjoy the pleasures of Beavis and Butthead on their wild and hilarious adventures.