Relax Gaming are changing the game with an audacious entry into the world of ‘Book of’ themed games with Book of 99, a game that proudly boasts an RTP of 99%!

This bold move from Relax Gaming and the features that come with it certainly makes it stand out, and it’ll make those who are searching for a good wagering game jump for joy (if Casinos don’t exclude it that is)

Book of 99 offers you some of that tried and true gameplay that you know and love, but with inventive little twists…

The Book style genre of game has gained unprecedented momentum throughout the years, with no sign of slowing down. These potential rich games and exciting expanding feature bonuses make them the epitome of exhilaration in the eyes of many.

It all started with the Book of Ra games which kickstarted a generation of sequels, and despite it’s daring differences, Book of 99 is very much an influence of simpler originals.

We’re heading deep into the world of Greek Mythology as we stare the cyclops in the eye and see what Book of 99 has to offer.

Being a title from Relax Gaming, it’s no wonder that the design quality of Book of 99 is superb.

The game uses an Ancient Greek mythological theme, which has found its way into Slot games time and time again over the years.

The character and symbol design showcase Relax Gaming’s artistic prowess, with various heroes and villains that include a Cyclops, which seems to be prominent in Greek legend and literature.

The border for the right side of the reels is a Greek Column, but your attention would be better placed by looking to the left, which holds a counter and a map which is integral within the gameplay of Book of 99…more on that below.

There’s nothing flashy to be said about the theme for Book of 99. There’s no grandiose and over the top depictions of the deities and the culture, but perhaps the gameplay of Book of 99 is exuberant enough on its own to make the game striking enough?

Book of 99: Betting and Symbols

It would be an understatement to say that Relax Gaming generally cover all of the basis when it comes to betting options. Every single slot of theirs seems to cover both ends of the scale, and Book of 99 is no exception.

The lowest option in the game is £/€0.10 per spin, and the highest option is £/€100. With plenty of different options in between, there really is something for everyone.

Pay outs for these symbols are extremely impressive too. A line of 5 of the top symbol will yield a grand 500x! The next highest paying symbol is nothing to scoff at either, with 200x on offer if you manage to get a full line.

To be a true book game, Book of 99 had to adopt the immense potential that others before it did with the pay out potential. It’s a huge part of the reason why these games are so popular after all.

Book of 99: The Base Game and Features

In order to form a win, you’ll need 3 or more matching symbols from left to right, starting from the left most reel, with the exception of the top symbols which you need only 2 of.

There aren’t any Base Game modifiers to speak of, so the experience you’ll get in the Base Game of Book of 99 is very similar to that of other Book style games.

This shouldn’t really put anyone off the game. As mentioned, the potential in these types of games is very formidable even in the Base Game due to high pay out values.

The Book symbol will double up, acting as a Scatter and a Wild symbol, which helps you make those all-important connections. 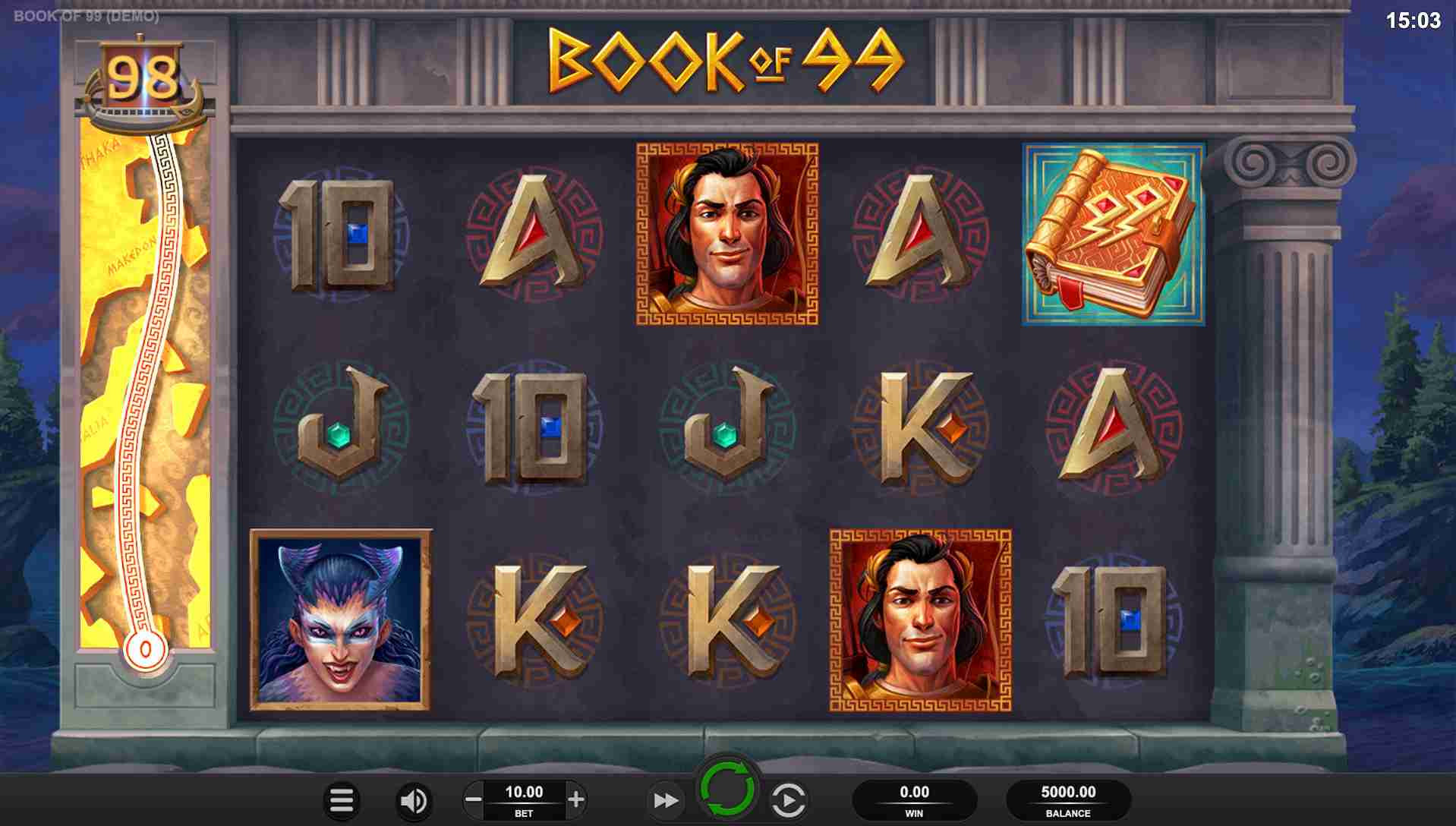 Free Spins in Book of 99 are triggered by landing 3 or more Book symbols anywhere in view on the reels, and 10 spins are awarded.

A special symbol will be chosen as the expanding symbol during the Free Spins.

If a high paying symbol is chosen as the special expanding symbol, then you’ll need at least 2 to trigger the expansion.

Special expanding symbols pay out on each line even if the symbols are not connected from left to right.

We all know the formula by now, but if you don’t, just know that this type of bonus has absolutely massive potential, especially for a full expansion of high paying symbols.

The game also has the potential to retrigger if 3 ore more Scatter symbols land within the Bonus, which awards 10 more spins.

Unfortunately, retriggering the game does not give you another expanding symbol, so you’re stuck with the same symbol you had at the start of the bonus for better or for worse.

One interesting aspect of Book of 99 is that aforementioned ‘map’ on the left of the reels, which is actually a Wild Collection.

For every Wild collected in Book of 99, a step is added to the meter.

Free Spins are triggered when the meter is filled with 99 collected symbols.

It doesn’t actually matter what stake you use, the meter doesn’t reset as you change your Stake.

However this isn’t a Wild Swarm situation, the Free Spins will be played with a bet size corresponding to the average size used when collecting each of the Wilds.

You may be able to push up the average by a little but by upping the stake near the end, but not significantly so if the majority of the collections were on the lower stakes.

Book of 99 Slot Review: Our Verdict

Book of 99 seems like your run of the mill Book game on the face of things, but there are some undeniably attractive aspects of the game that are hard to ignore.

For one, the 99% RTP is hard to fathom. This generous math model makes Book of 99 one of the best wagering games out there, but there’s every chance that Casinos will see this as an excluded instalment going forward.

The collection system to trigger the bonus is a great feature to include, and it makes it stand out just a little bit from the crowd of Book games that are basically just reskinned versions of an original.

Everyone wants a slice of the pie that is the immensely popular Book genre game, and Relax Gaming might have just made Book of 99 one of the top options.

At the end of the day, there’s nothing particular inventive about Book of 99, but there are just a couple of things that make it great.

All too often people try and evoke fond memories of a trusty original by bringing out a game with similar gameplay and dated graphics to match, but Book of 99 looks to live up to that high standard that we’ve come to know and love from Relax Gaming.

Book of 99 is a high volatile game with win capabilities of up to 5,000x, which seems to be pretty much in line with other games in the same family.

Overall, there’s a few compelling aspects of Book of 99, and despite your loyalty and love for games like Book of Dead, Legacy of Dead and of course, the old original, It’s hard to ignore that Book of 99 might be a real contender with statistics like this.