Pragmatic Play are back yet again and they’re taking us on a familiar journey to the plains of North America amongst the Wildlife in Buffalo King Megaways!

The Buffalo Has been depicted many many times in Slot Format, becoming quite a popular centrepiece for a lot of games. We’ve seen games like Buffalo Rising Megaways, Buffalo Blitz, Buffalo Lightning and Big Buffalo.

What is it about the mighty Bison that the gambling community find so appealing? Maybe raw power translates to big wins – we’ve certainly seen these games pay.

Whatever the reason, if you were a fan of the original Buffalo King, then rejoice for the return in Megaways format.

Buffalo King the original was laden with potential, with wins capable of up to 93,750x. Buffalo King Megaways have seemingly dumbed down the potential a lot, with a max multiplier win of up to 5,000x.

This is unusual for the potential for a sequel to be seriously decreased, but we suppose the correct question to ask was – Did Buffalo King ever realistically hit 93,750x anyway? Probably not.

Despite the decrease in potential, Buffalo King Megaways is in line with a lot of other Megaways instalments, so as far as Megaways Potential goes its about right.

Let’s delve into the details of Buffalo King Megaways and find out what we can expect from Pragmatic Play’s newest Megaways adventure.

The theme for Buffalo King Megaways is nothing new what so ever.

As with every Buffalo related game, Buffalo King Megaways situates the player in the North American Prairie, with desert and canyons visible in the backdrop.

Despite the repetitive theme, the graphics are at least consistent with the Pragmatic Play quality we’ve become accustomed to.

During the Free Spins, the scene changes to a night time setting, with auroras and starts strewn across the sky.

The music for the game is adventurous and upbeat tune which does well in uplifting your spirits, but overall the theme and general design for Buffalo King Megaways is nothing we haven’t seen before.

Seemingly everybody wants a go at the Buffalo franchise, and given that Buffalo King Megaways is a revival of an older game rather than an original concept, it gives Pragmatic Play the perfect motive to jump on the Buffalo Train yet again.

Betting options in Buffalo King Megaways is customisable by Bet Level, Coin Value or Total Bet, like all other Pragmatic Play titles are.

Pragmatic Play have once again included their ante bet feature. The Ante Bet feature increases you stake by 25% when activated, doubling your chance of landing the feature.

To some, this feature is great, but on the other end of the scale it doesn’t really inspire much confidence on Buffalo King Megaways’ ability to bonus without it activated.

The highest symbol position in the game rightly belongs to the Buffalo, the star of the show.

Following on from the Buffalo is an Eagle, Jaguar, Wolf and Moose. Low paying symbols are A, K, Q, J & 10.

There’s a Wild symbol which substitutes for all except for the Scatter Symbol. This can appear on reels 2-5 only.

Buffalo King Megaways: The Base Game and Features

Buffalo King Megaways will be some very recognisable Megaways action but with a little bit of a twist.

The ways to win on Buffalo King Megaways are significantly higher thanks to the fact that reels 2-5 can hold up to 8 symbols each, including the sliding reel at the top.

To win, you’ll need to connect 3 matching symbols from left to right, starting from the left most reel. Winning symbols will disappear from view, causing a Tumble Feature.

There isn’t any stand out features in the way of Reel Modifiers in Buffalo King Megaways. Most of the excitement is saved for the Free Spins 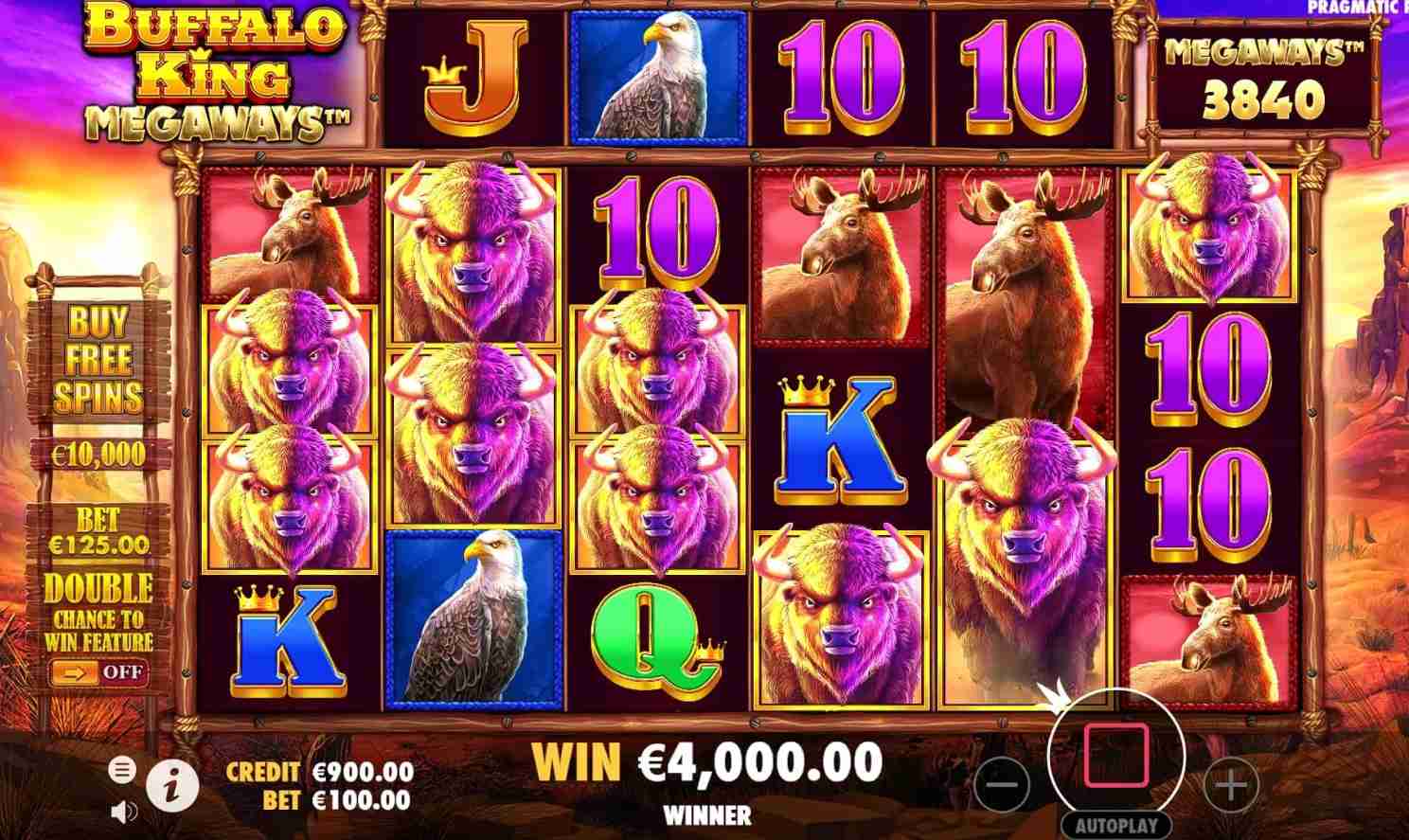 Scatter Symbols also have a pay out mechanic too.

It’d be too easy to assume that Buffalo King Megaways follows the crowd, with incremental multipliers.

Wild Symbols have a random 2x, 3x or 5x multiplier. Every time a Wild is used in a winning combination, its multiplier will be accumulated in the Tumbe Multiplier Indicator.

Multipliers multiply by each other and do not add together, which can result in multipliers that are significantly higher.

On each new Free Spins, the multiplier will start at 1x once more, and the process is repeatable as long as you hit with Wild Multipliers.

Although the vast majority of the game is a Megaways Slot to its core, it’s at least commendable that Pragmatic Play tried something a little bit different in the Bonus.

Opinions will be clearly divided on which mechanic is better. Some will undoubtedly prefer the more conventional way, but you can’t deny that Buffalo King Megaways has potential.

The game may be re-triggered, which is possible when 3 or more Scatter Symbols land, where 5 more spins will be awarded.

Buffalo King Megaways also has a Bonus Buy option. This will only be available to those in jurisdictions that allow it, so UK players won’t be able to utilise this. 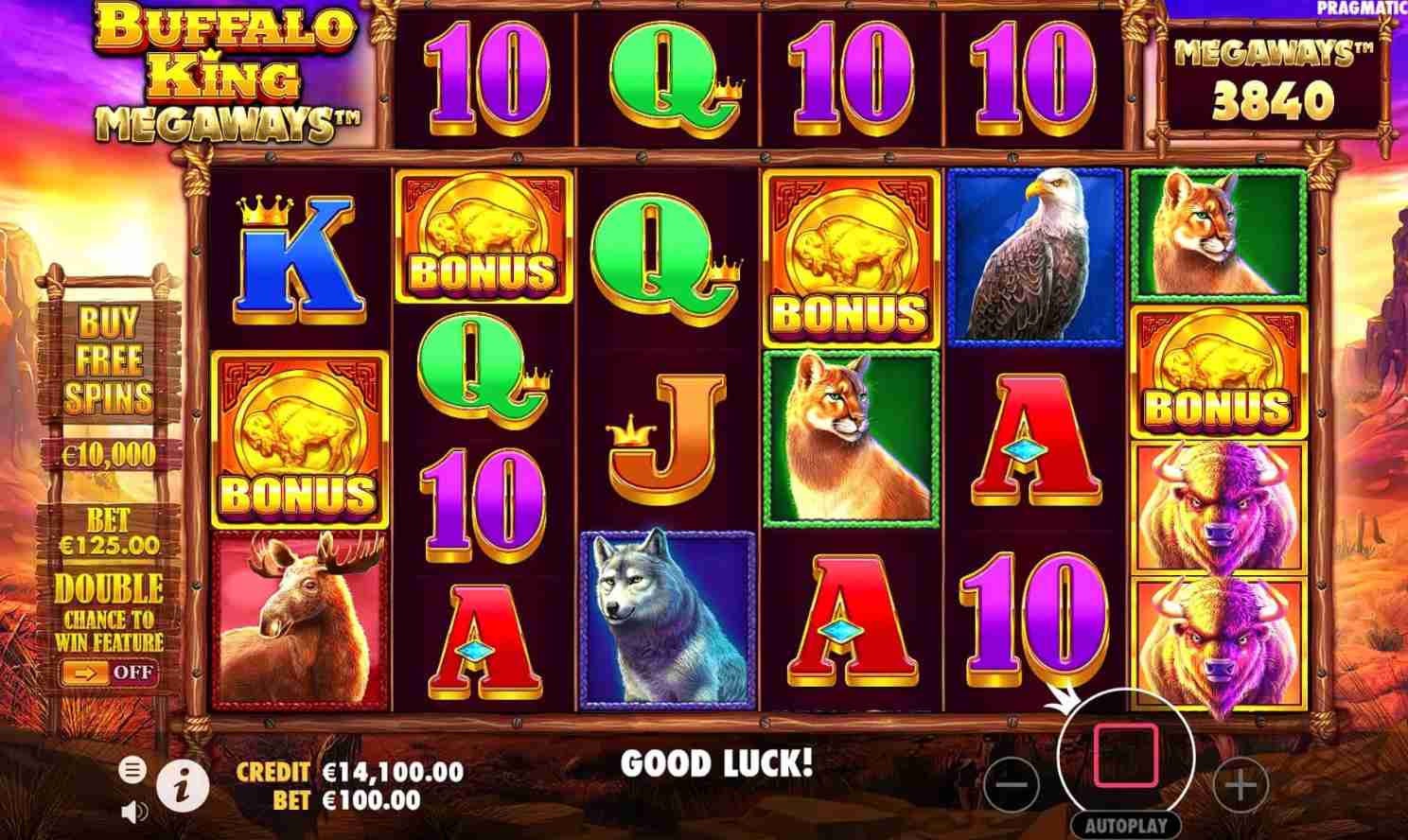 Where to Play Buffalo King Megaways?

Many of your favourite Online Casinos are home to Pragmatic Play titles, such as Unibet, Party Casino and Videoslots

All three of these great Casinos will undoubtedly host the new Buffalo King Megaways when it releases!

Buffalo King Megaways isn’t exactly the pure definition of innovation by any means.

At least the Free Spins tries to be a little bit different with Tumble Multipliers rather than a progressive one, which would have made it a pure reskin.

Looking to the statistics of Buffalo King Megaways, the RTP looks pretty decent in all modes where it may vary

All of these are decent values well over the threshold considered decent by the gambling community, but the Max win is a little bit on the lower side, at least compared to its predecessor.

Buffalo King was pegged to have potential of up to 93,750x, while Buffalo King Megaways stands truly in the shadow of other titles with Pragmatic Play’s favourite max win cap of 5,000x.

In hindsight, who really got near 93,750x in the original? Nobody. But it does speak volumes about Pragmatic Play playing it a bit safe again with a standard 5,000x win.

It’s not as if 5,000x is small, it just seems to be the max win for 99% of their games. We’d love to see Pragmatic turn up the dial with some insane hits possible.

Buffalo King Megaways is a High Volatility Megaways title that will resonate well with those who have an affectionate spot in their heart for the never-ending barrage of Buffalo style games.

Despite its similarities, Buffalo King Megaways is really quite good, and the tumble multiplier feature can turn non believers of this mechanic into fans with some insane hits possible through consecutive hits and big multiplying wilds.