Cash Vandal Slot by Play’n GO will transport you to 3 European capitals, namely London, Paris, and Berlin where you can showcase your graffiti skills. The slot has a rather unusual reel layout with just four reels and 10 fixed pay lines that might surprise you. The slot game comes with a high-frequency feature with a winning payout potential of up to 500x your trigger bet within the base game, and it rises high up to 5,000x your trigger stake during the free spins

. The top of the game screen takes you straight through some really famous landmarks from the three capital cities while the jazzy musical soundtrack creates a very relaxing atmosphere which will inspire you to use your artistic drive to win the game.

Knowing all things about graffiti, we were astonished to discover symbols from traditional fruit slot games. At the lower end, in ascending order, there are cherries icons, blueberries, raspberries, melons symbols, and oranges. They are followed by bundles of cash, bars, and bright diamonds.

The decorative wild tile is the top-paying symbol of the game and can replace all the symbols except the Scatter, represented by the red spray can when it lands on reels one up to three, and the golden spray can on the fourth reel. 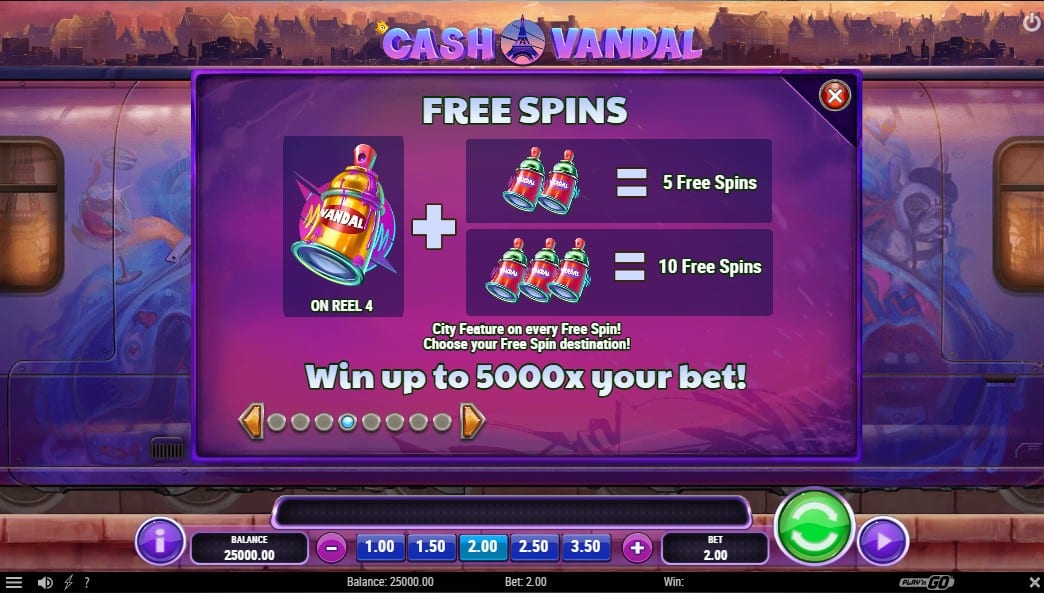 At the beginning of every spin, the game automatically and randomly selects one pay symbol, which includes the wild appearing super stacked up to eight icons high upon all of the reels. That will increase your chances of getting a full screen of identical matching symbols. Payouts for a full-screen of symbols range from 10x to 500x your triggering bet.

Cash Vandal is a game with 4-reels, 3-rows, and 10 pay lines. You can play the slot on your mobile device or your PC, and betting ranges from £0.10 to £100 a spin. Payouts for four of a kind start out at 1x your trigger bet and peak at a high 50x your wager.

The slot game has a medium to high variance with the RTP set at 96%. You can access the useful AutoPlay feature to set 10 to 100 auto spins without any interruptions, and you can even Quickspin to spin the reels at double their default speed.

It is all about the golden spray can playing Cash Vandal slots. You will need the key to triggering all three types of features, and it only appears on the fourth reel. Depending on the number of red cans you get on the 3 frontal reels, you can trigger a respin, and get one free spin with a random reel modifier.

Alternatively, you can claim up to 10 free spins with a selectable reel modifier, which is called the city feature. The ReSpin locks reel four with the golden spray can set in place, and you can spin the other 3 reels once more to give you another chance of getting one, or more red can Scatters.

If you get one red can with the golden canon upon reel four during the initial spin or ReSpin, that gifts you one free spin and reel 4 will transform into a stacked wild. If you get 2 or 3 standard red cans symbols with the golden canon on reel 4, that will trigger 5 and 10 free spins respectively, and you also get to choose one out of 3 city features.

Furthermore, reel 4 will become a sticky stacked wild throughout the bonus game. You will be visiting 3 European capitals playing Cash Vandal slot, so it is only fitting that they have 3 reel modifiers named after them. 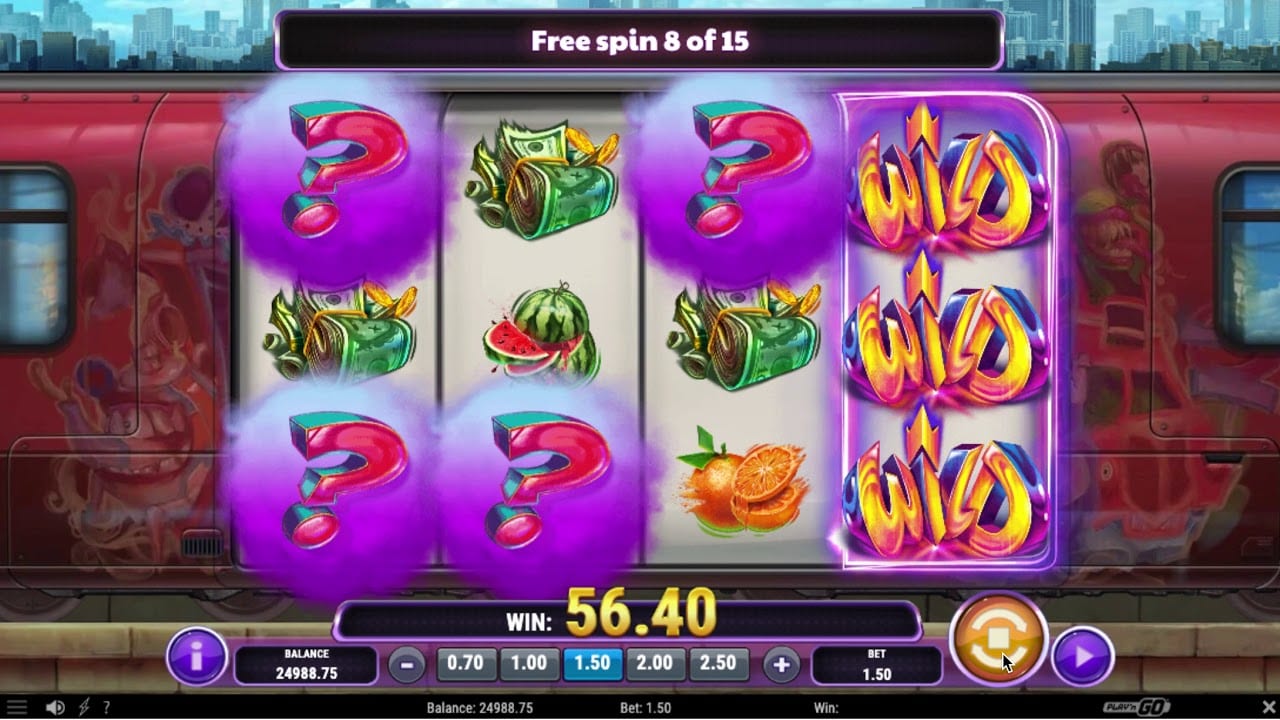 The Berlin city bonus feature will gift you 2, or 3 random Wilds on reel 1 to 3 with every free spin of the reels. Play’n GO are one of the primary game developers for online casinos and are indeed very popular among the slot gaming community.

With wilds and reel modifiers randomly applied during each spin, the game has a brilliant mechanic producing fantastic gameplay. The game provides a concoction of great winning potential along with a suspenseful and atmospheric gaming session.

The game has a brilliantly crafted mobile version that works really smoothly on all mobile devices and their latest operating systems. The game’s graphics are crisp and clear and serve up a great atmosphere even playing on a small mobile phone screen. The game is optimised primarily for mobile play and is streamlined and modified to provide you with an exceptional mobile experience.

As avid reel vandals, our review experts were sceptical at first as Cash Vandal slot only has four reels. But with the creativeness of Play’n GO, we were pleasantly surprised. The slot has exciting features that hit at a high frequency, surprising moments when reel modifiers are applied, and good win potential. Want to be a reel vandal too? Then try the Cash Vandal slot from Play’n GO and be impressed! 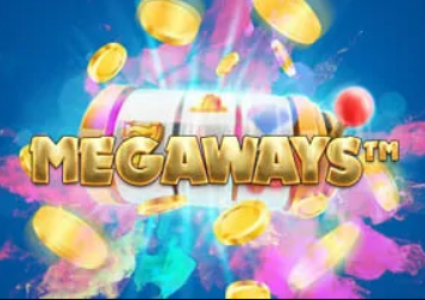