Play’n GO return with another instalment in their Joker series of games, with Fire Joker Freeze!

Fire Joker Freeze combines elements of their Fire Joker and Ice Joker games in a head to head battle.

A lot of excitement is underway in Fire Joker Freeze, With Re-Spin of Ice, Re-spin of Fire and a new Wheel of Ice and Fire with multipliers that can top up the balance rather nicely!

Fire Joker was a minimalistic yet red hot instalment from Play’n Go that offered simplistic gameplay on a 3 reel set up with wins of up to 1,000x available through the Re-Spin of Fire, and Ice Joker was a standalone game as well.

Released in December 2020, Ice Joker went sub zero with a 4 reel set up and a Winters Wild Wheel feature that had you collecting Ice Jokers to be added to the reels with wins of up to 1,000x also possible.

How will Play’n GO integrate the two titles in a new game where the Fire Joker faces Iceilla? Let’s delve into the game to find out who’s the best.

In this Fire Joker Freeze Slot Review, we’ll be breaking down all of the statistics of the game, as well as gameplay and it’s features to see if the Jokers have what it takes collectively to make the Joker series a compelling option.

Fire Joker Freezes takes its inspiration for the theme more so from Fire Joker than it does from Ice Joker, with a simplistic Red background as opposed to the winter wonderland seen previously in Ice Joker.

There isn’t really too much that can be said about the theme of Fire Joker Freeze.

The style will definitely resonate better with those who like classic fruit machine games, with symbols that will take you back in time to an older era of gaming.

In hindsight, if you didn’t know better, and if the Fire Joker Freeze symbol didn’t sit atop the reels, then you’d probably think that you’re playing Fire Joker.

It’s all a little bit underwhelming truth be told, but can the gameplay consolidate a lacklustre theme? First up, let’s look at the betting options available in Fire Joker Freeze, as well as the symbols.

The Betting options in Fire Joker follow usual Play’n Go games with options as low as £/€0.10 per spin and as high as £/€100 per spin.

There is a lot of different options in between the two to suit budgets of all kinds as well, so there’s something for everyone in Fire Joker Freeze.

The two highest paying symbols in the game is the Fire Joker and the Ice Joker, of which both are also Wilds. 3 of these in a line will pay you 10x.

Following on from the Jokers is the 7, Star, Bar Plum, Grape, Lemon and X symbol.

Fire Joker Freeze: The Base Game and Features

Fire Joker Freeze has simple and easy to understand gameplay, much like both Fire Joker and Ice Joker did.

To form a win, you need to connect at least 3 symbols from left to right along any of the 5 available pay lines.

The Fire Joker and Ice Joker will act as Wilds, substituting for wins, as well as each other.

Fire Joker Freeze see’s the return of some familiar Joker Series action in the form of Re-Spins.

The Re-Spin of Fire is pretty much exactly the same feature as the Re-Spin feature seen in Fire Joker with a subtle difference.

If 2 Stackers of the same symbols land on the reel, then they will be locked in place for a Re-Spin of Fire.

The remaining non-winning reel will spin, giving you a chance to make some connections.

If you land an Ice Joker during the Fire Re-spin, then it will immediately become stacked, triggering the Wheel of Fire and Ice

The Ice joker will become stacked if it lands on a non-winning spin.

This gives you a second chance to win. The feature will also activate if the Ice Joker lands on two separate reels.

Out of the two features, it definitely seems like the Fire Joker Re-Spin offers a little more excitement.

But neither offer as much excitement as the Wheel of Fire and Ice.

Any time 3 stacks of the same symbol land within the Base Game, the Wheel of Fire and Ice will trigger.

There are Four different wheels, containing both multipliers and Ice Symbols.

The Outer wheel will spin, and if a multiplier is landed then the multiplier will be applied to the win.

Hitting the Ice symbol will take you to next inner wheel, where bigger multipliers are available.

The highest multiplier available is 20x, which would be formidable if you managed to get a full screen of a good symbol prior to triggering the feature! 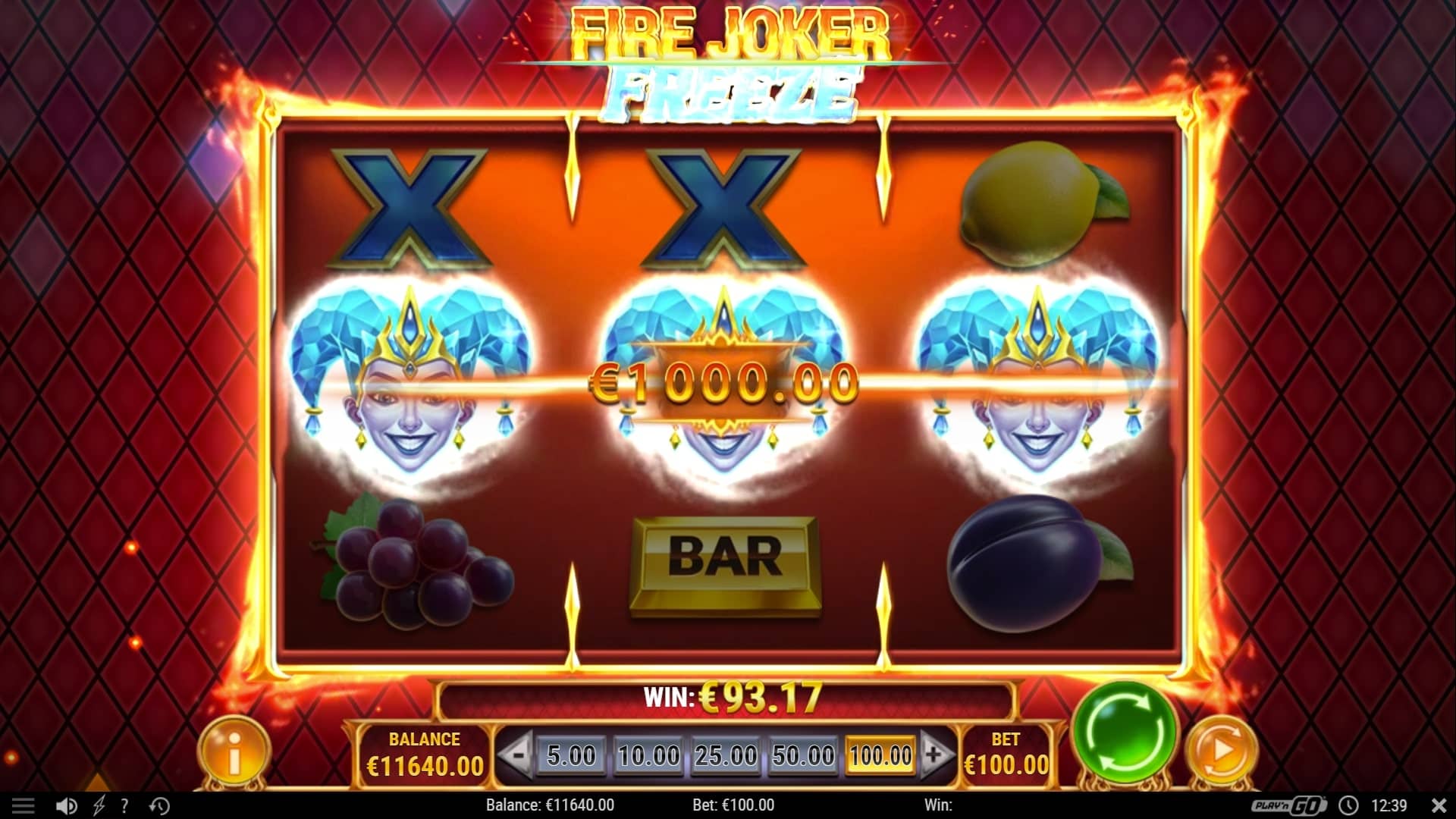 Where to play Fire Joker Freeze?

Fire Joker Freeze is yet to be released.

It will be available to play from 22.04.2021 at most New Casinos, as well as some of your favourites, like Unibet, which is already home to the previous Fire Joker and Ice Joker games plus a lot more of Play’n Go’s exciting portfolio of slots!

Fire Joker Freeze leans slightly more to the side of Fire Joker than it does Ice Joker, and the Ice Joker re-spin feature just isn’t as exciting as the Fire Joker Re-spin is.

In a game where you’re pitting two of your own previous games against each other in one new instalment, you’d hope for equal excitement from them both.

Still though, Fire Joker Freeze isn’t bad as a follow up game, with wins of up to 1,000x possible.

Fire Joker has a volatility rating of 6, which makes it medium volatility rather than high. This is good news, as the maximum win available here certainly wouldn’t have warranted a highly volatile game.

If you were a big fan Fire Joker, then Fire Joker Freeze will be a dependable follow up. If Ice Joker was more your thing, then you might feel a little disappointed in the game, as Ice Joker doesn’t really shine through as prominently as Fire Joker does.

Overall, not a bad instalment from Play’n Go by any means, but any more games in the Joker series would need some serious re-work to stay interesting, such as higher max wins, more features, like Free Spins, and a lot more excitement.