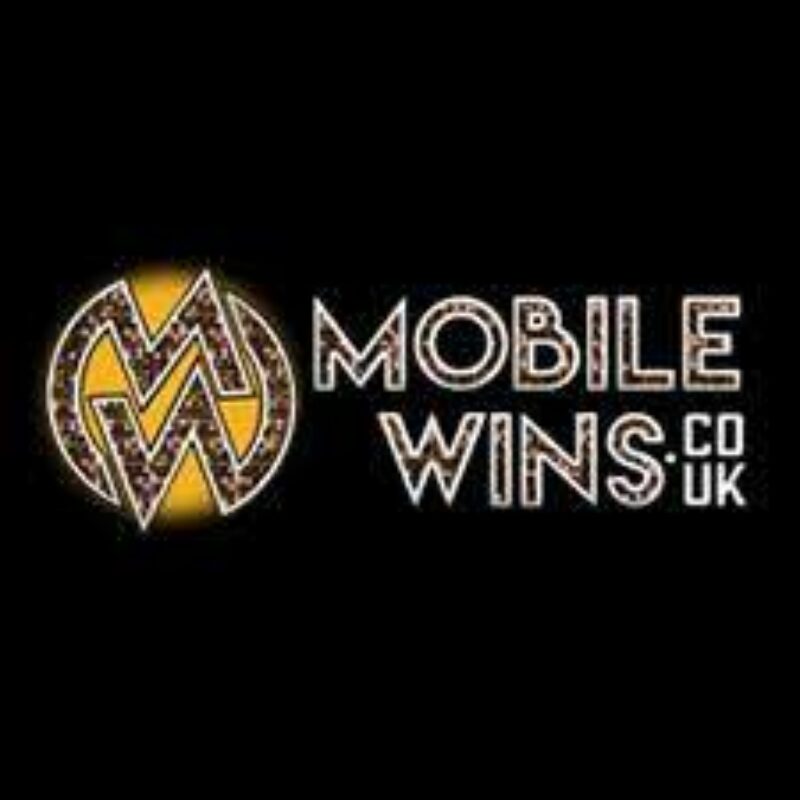 We’ve danced with lightning looking for power zones to hit those colossal wins with Stallion Strike, and we’re back for more. This time, we’re delving deep into the lair of the beast with the newest instalment from Ash Gaming and Playtech, Legend of Hydra Slot.

Those of you who remember Stallion Strike will definitely remember what an electrifying experience it was with the innovative Powerzone mechanic, and you’ll also remember the heart-stopping potential it brought with it.

Obviously a formula for success, Ash Gaming is taking the essence of Stallion Strike and Reinventing it for a brand new experience.

Ash Gaming is a premier content studio of Playtech UK, and pride themselves on high quality and innovative titles, which always bodes well with consumers who have come to demand such a standard from games.

4 Heads Are Better than One

In Greek and Roman mythology, the Hydra was a serpentine monster with many heads, it is said that if one were cut off, two more would grow in its place. The Hydra is the theme for this mythological instalment, and it definitely has an air of mystery to it.

In the background, a stone structure with Hydra statues covering each pillar appears almost completely shrouded in water, and 4 Hydras, 3 of which are encased in stone loom over the reels, what could these dormant beasts mean? The music is a dramatic score which gives the game a good ominous feel to it.

Legend of Hydra is a 6-Reel, 5-row slot with 15,625 ways to win. Betting for this one starts at a low 0.10 and can go as high as 200. There are 14 symbols in total, including your Wild and Scatter symbols; but your top paying symbols are the King and Queen who pay the most.

The Base Game of Legend of Hydra

No Pay lines here, 3 or more matching symbols anywhere on consecutive reels from left to right will form a win, and the game has a standard 15,625 ways to win.

Legend of Hydra features the very coveted return of Power zones. A ring of fire will symbolise a power zone symbol, and can encase any symbol except Wild and Scatter.

Once a Powerzone symbol lands, it will lock a power zone onto the reel. Power zones will connect to each other horizontally and vertically.

If a power zone symbol lands within a power zone, it will change itself and all other spaces connected to it into a symbol of the same type. The aim of the game is to get a large area of power zones that are connected either horizontally or vertically so that all will be affected should the symbols change.

Power zones that are diagonally aligned with another power zone with no horizontal or vertical connection will not be considered part of the same zone and will not change together. 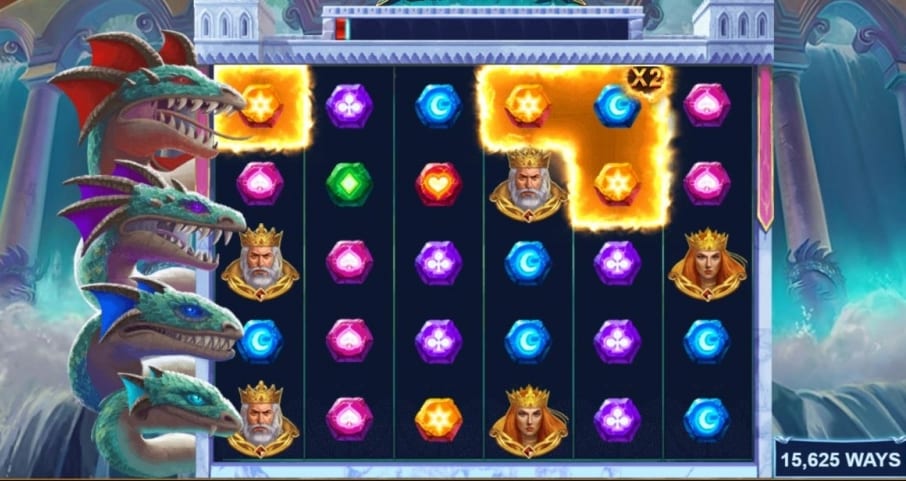 Legend of Hydra features the familiarity of power zones that we were accustomed to with Stallion Strike, hand in hand with brand new additions. 4 Hydras are prominent on the left side of the reel, and each serves a function of their own. Each of these can trigger on any spin, providing the relative Hydra is unlocked.

The smallest of the bunch and the only one not encased in stone will add random wilds onto the reels on any spin. The next one along, directly above baby hydra will add extra power zones onto the reels.

The slightly meaner looking one above that will add win multiplier power zones, and the biggest and baddest of the bunch sitting proudly at the top will transform all power zones into a mystery symbol.

As previously mentioned, 3 are encased in stone and shrouded in mystery. How would one awaken these beasts?

Hydra features are unlocked in sequential order, and to unlock the next one you’ll need to fill the meter above the reels by landing a power zone symbol into a power zone.

A nice little design feature also needs to be applauded here, as you fill the meter you’ll see the Hydra you’re due to unlock next slowly start to crack and bleed colour as it gets closer to coming to life.

Each of these features brings their own unique flavour to the game and can set you up for some huge wins. Unlocking these can be a bit of a grind however.

Each scatter that landed to initiate the free games will turn into a powerzone. Powerzones are not removed during free games, and after all spins are played, the mega spin will trigger.

The megaspin will transform all powerzones into the same mystery symbol, regardless of if they are connected horizontally or vertically.

The game also has the potential to re-trigger, and does so quite frequently. A mere 2 scatters are needed within the bonus to re-trigger and will award you 3 additional spins. 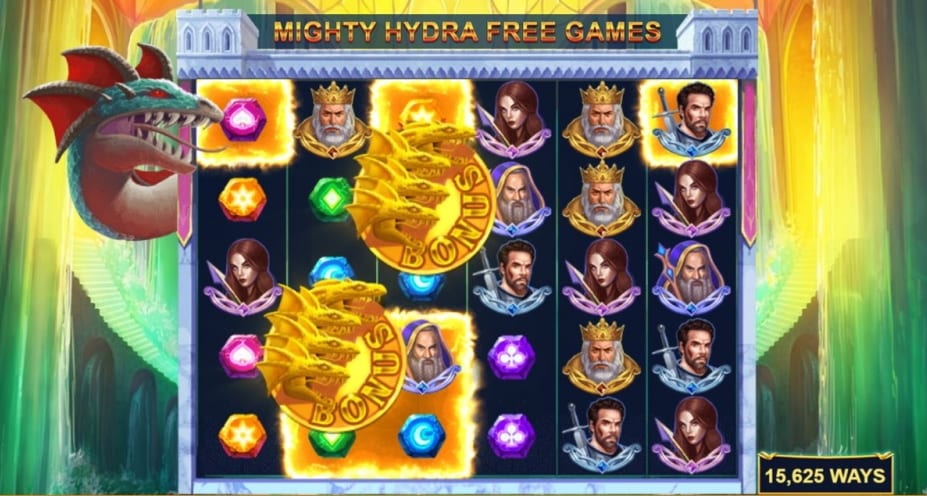 Legend of Hydra has taken all the things we loved from Stallion Strike and turned it into another captivating game with additional and exciting features.

The theme chosen is intriguing and has been executed expertly, and the gameplay is exhilarating due to the presence of Powerzones that can set you up for some nice base wins.

The only negative to be said sits with the Hydra features. Although these features bring a nice flavour to the game previously unseen in Stallion Strike, they seem to take longer to unlock as you climb closer to the last Hydra, with the last one taking a considerable amount of time to unlock.

Also, the re-spin you get when you finally unlock all 4 and fill the bar again can be a bit of a kick in the teeth if you get awarded one of the lower Hydra features.

On the other hand, with the one hydra already unlocked and powerzones, the game held the balance quite well and quite often these materialised into decent enough base hits that persisting for a bonus or another Hydra feature wasn’t too bad.

Your patience, and the type of balance you have to play with will determine whether or not you stay long enough to get these features, we envision that a lot of people may drop out, or run out of credit before getting too far.

The bonus did take a long while to unlock, but of course as any one knows, this can vary from session to session. When it did unlock, the bonus gave us the same formula that we loved in Stallion Strike, and it was certainly exciting.

Modest wins often materialised from the bonus rounds, but winning often in the base game gives it a feel of a medium/high volatility game.

Overall, if you loved Stallion Strike you’ll definitely want to give this a go. It’s fun, adventurous, inventive and definitely has the potential on a good day for some momentous wins.