Leprechaun’s Magic gets the Megaways Slot treatment and potential has been super-sized in this new Red Tiger slot game Leprechauns Magic Megaways Slot.

Leprechaun’s Magic was a game released not so long ago, which utilized a classic Irish theme, as well as inspiration for its features from other popular games with its expanding symbols pay anywhere mechanic.

Leprechauns Magic Megaways Slot promises some of the same fun and charm introduced by the original with the added extra of the highly regarded Megaways Mechanic.

St Patrick’s day has been and gone this year, but the Luck of the Irish lives all year round, and though the theme is probably the most commonly used in the industry, you can’t help but agree that a certain charm surrounds games like this.

it’s a theme so inherently ingrained in the world of gambling that it can almost be considered retro. What sort of pot awaits at the end of the rainbow in Leprechauns Magic Megaways Slot?

Given the theme, the setting for Leprechaun’s Magic Megaways Slot is unsurprising. A charming and cheery Irish tune plays and the background conveys a luscious green rural Irish countryside.

There’s not really loads to say about a theme for the Irish games, all of them seem pretty generic and not very innovative, yet they don’t really need to be.

The betting options for this game are rather restrictive, depending on what your idea of an ideal stake is. For the vast majority of people, the options provided will be absolutely fine, with a minimum option of £0.20 per spin.

Even those who enjoy higher stakes may find their ideal spot, with a maximum of £4. The restrictive nature really only applies to a minority of people who regularly play at super high stakes.

Landing 3 or more matching symbols on consecutive reels, starting from the left-most reel will form a win, and wins will pay from left to right.

Leprechauns Magic Megaways Slot has 6 reels, each of which can vary in the number of symbols it drops per spin, which will invariably deviate the number of Megaways, or ‘ways to win’ available on each spin.

Leprechauns Magic Megaways Slot has a rather severely reduced maximum Megaways, so you won’t see the conventional 117,648 ways that you might be used to. Instead, the maximum number of ways is 15,625.

Symbols also do not cascade upon winning. Don’t let this detail put you off, there are features within the game that make up with it, such as the Expanding Symbols. 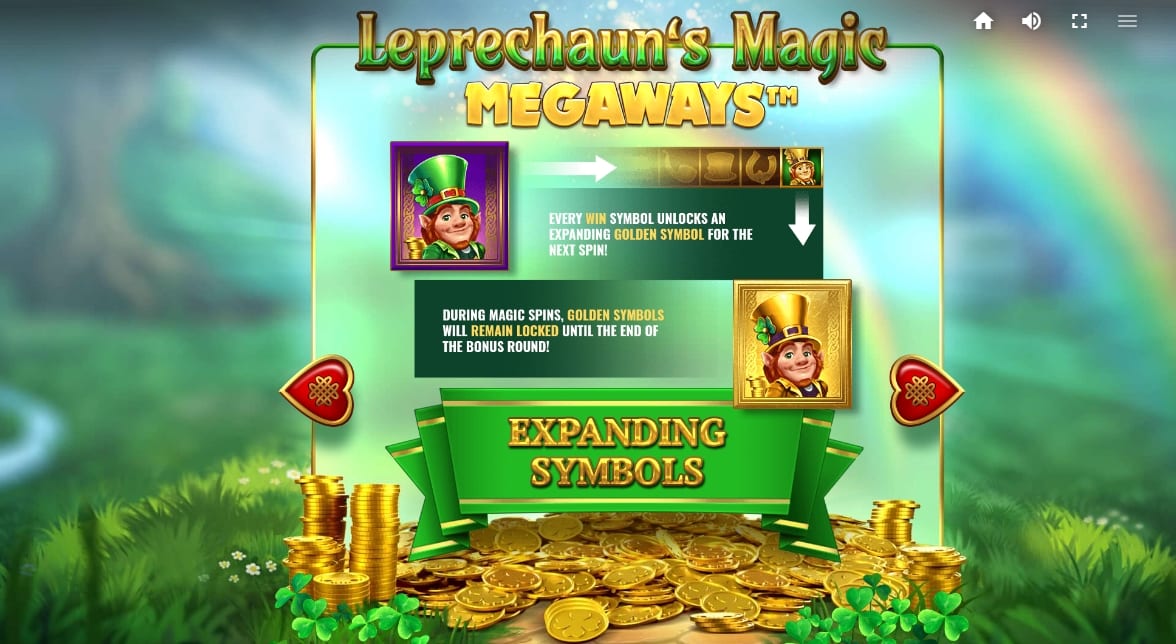 Leprechauns Magic Megaways Slot draws inspiration from its previous game, which in turn took its inspiration from the ‘book of’ style of gameplay. In this game, winning symbols will unlock a Golden Symbol, which you’ll see above the reels.

On the next spin, if 2 or more high paying, or 3 or more low paying symbols land, then they will expand to cover the entirety of their respective reels.

Regardless of their position they will pay relative to the number of expanding reels you have, so you need not worry about whether or not they connect via adjacent reels.

It’s a great feature that more than explains, and makes up for the reduced number of Megaways and lack of cascading symbols in the game. If multiple wins are presented, then multiple Golden Symbols will be unlocked for the next spin.

After the spin of which Golden Symbols are active, they will reset and will need to be unlocked via another win. 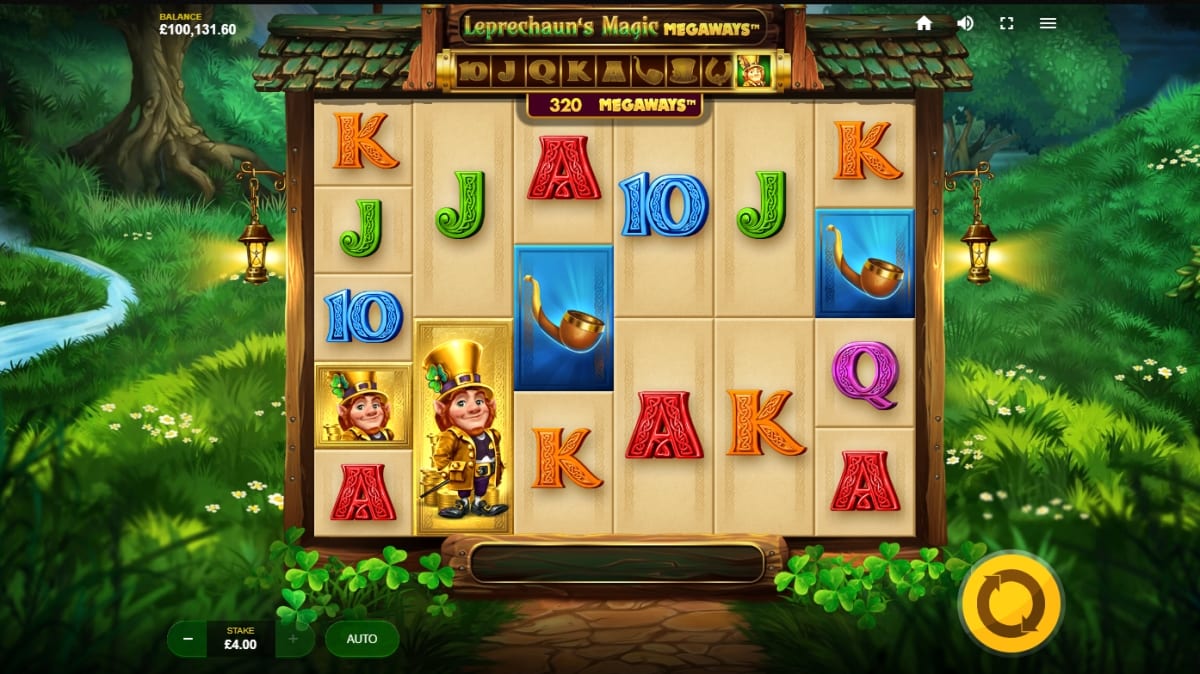 Landing 3 Magic Spin Symbols, represented by Gold Pots, will trigger the Free Spins. A Magic Wheel will determine the amount of Magic Spins awarded. Within the wheel, there are 12 sectors, and the lowest is 4 spins, which will also give a re-spin of the wheel.

Extra Scatters beyond the 3 needed to trigger the Bonus can land in the Base Game, and each additional will add +4 to the total available to win on the wheel.

During this bonus, winning symbols will become lit much like they do in the base game, offering the potential to land them as an expanding symbol next spin.

The difference is that during Magic Spins, these will stay lit for the entirety of the bonus, rather than just the spin after you triggered the Golden Symbol.

Of course, you’ll want to light up as many of the symbols as you can where potential massive rewards possibly await.

Leprechauns Magic Megaways Slot keeps much of the same formula that the original Leprechaun’s magic had, but the potential is 4-fold that of the original. Thanks to the Megaways introduction, the possibility of landing a top win of 20,000x is there, which is absolutely huge regardless of your stake.

Those who see the maximum number of 15,625 ways and lack of cascading symbols may feel a little put off, but don’t be. The Expanding Symbols in the base game can more than make up for the lack of these features.

The game may not exactly push Megaways to its boundaries, but rather than it all being about Megaways, try to think of it as a tool for potentially bigger expanding symbols.

The game is highly volatile, so of course big wins are absolutely not guaranteed, and the Red Tiger label behind it might be an indicator to some that landing the bonus isn’t going to be easy, but it can be absolutely worth it when you do.