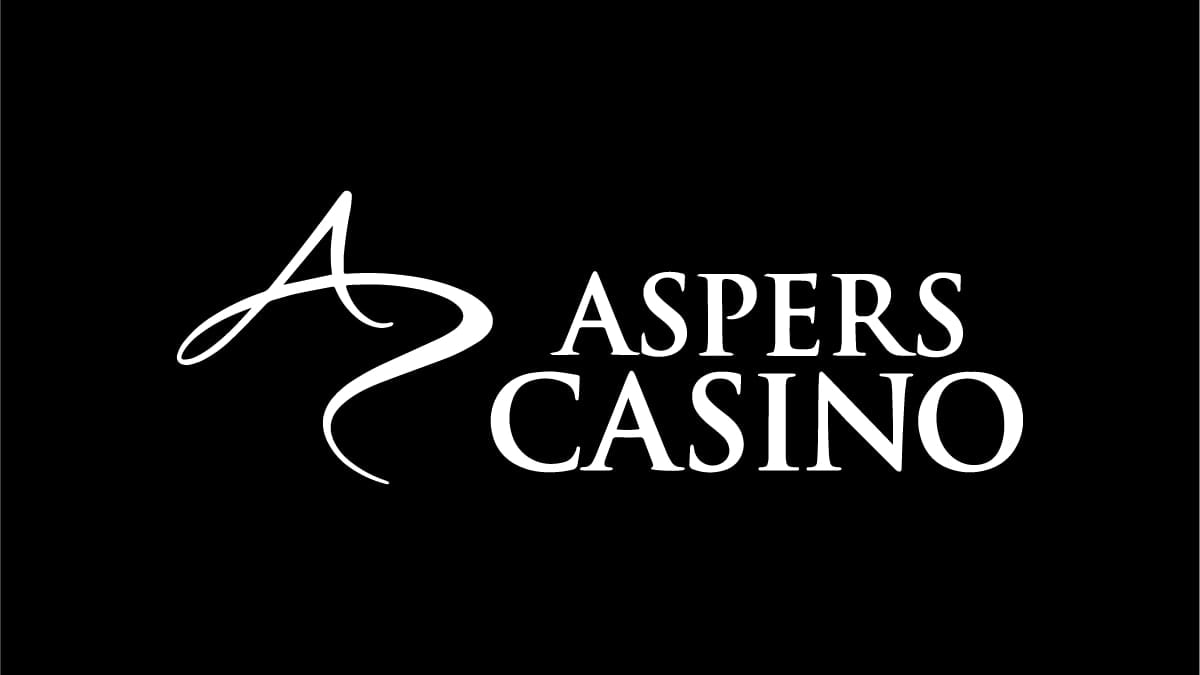 Welcome to Monopoly Utility Trails! Not everything is affluence, property management and Top hats in the world of Monopoly, at least not in this game.

Someone needs to look after the Electric Company and Water works, why not try your hand at keeping the water flowing and electricity running in a brand new Cluster Pays instalment from SG Digital?

SG Digital are no strangers to the world of Monopoly, having previously brought out Monopoly 250k, Monopoly Megaways, Monopoly Millionaire, Epic Monopoly and Monopoly Electric Wins.

If anyone would smash you at a game of Monopoly, its SG digital. They know it so well that you’d probably flip the board, and the table within 5 minutes. Monopoly Utility Trails looks a little different to what you’d might expect from Monopoly, but the Cluster Pays mechanic and the features that hide within are sure to be enticing.

Let’s delve right in and look at the statistics, theme and gameplay of Monopoly Utility Trails!

In Monopoly Utility Trails you’ll be welcomed with brass bordered reels that hold the Electric and Waterworks meters, and in the background you’ll see the concrete jungle in the world of monopoly where real estate means everything.

Monopoly is probably without a doubt, the most popular board game in existence. It’s image has taken many forms in different games over the years, especially in slot format.

Monopoloy Utility Trails isn’t exactly typical of Monopoly until you see the symbols on the reel that are represented by the metal tokens renowned around the world, like the Car, the Dog, the Top hat, and the Boat. Other than that the only real indication that you’re playing a Monopoly branded game is the Monopoly logo in the bottom left.

Monopoly Utility Trails certainly doesn’t have a bad design, it’s certainly well illustrated and professional looking, but it’s not quite as colourful and grandiose like a lot of other Monopoly games.

Betting options in Monopoly cover the basis for players who like to play at very low stakes, but not really those who play at very high stakes.

The lowest option in the game is £/€0.20 per spin, and the highest possible option is £/€4 per spin. This will be fine for the majority of players out there, but for a small minority that like to play at stakes much higher than this, you’re sadly out of luck in Monopoly Utility Trails.

As for the symbols, the Car symbol is the highest paying symbol, followed by the dog, the Boat and the Hat. Low paying symbols are covered by a blue, green, yellow and red gem.

There are also Wilds, which substitute for all other symbols except for the Electric Company Bulb and Water Works Tap.

Monopoly Utility Trails: The Base Game and Features

In order to form a win, you’ll need 5 or more symbols to connect horizontally or vertically.

Symbols that connect will explode, leaving empty spaces which will be filled by new symbols that fall in via a cascade.

SG Digital state that there is a maximum of 10 Cascades within Monopoly Utility Trails, which is a little strange. Surely cascades should go on as long as the winning combinations keep coming?

Not here, because more than 10 Cascades actually triggers the Off the Rails Jackpot…more on that below.

We’ll give them the benefit of the doubt, and look towards the Wild Features to see what they can bring to the table.

There are different Wilds within Monopoloy Utility Trails

It all sounds pretty exciting so far, but can Monopoly exist without the legendary Community Chest? Not really, thankfully though SG Digital has implemented it into the game. 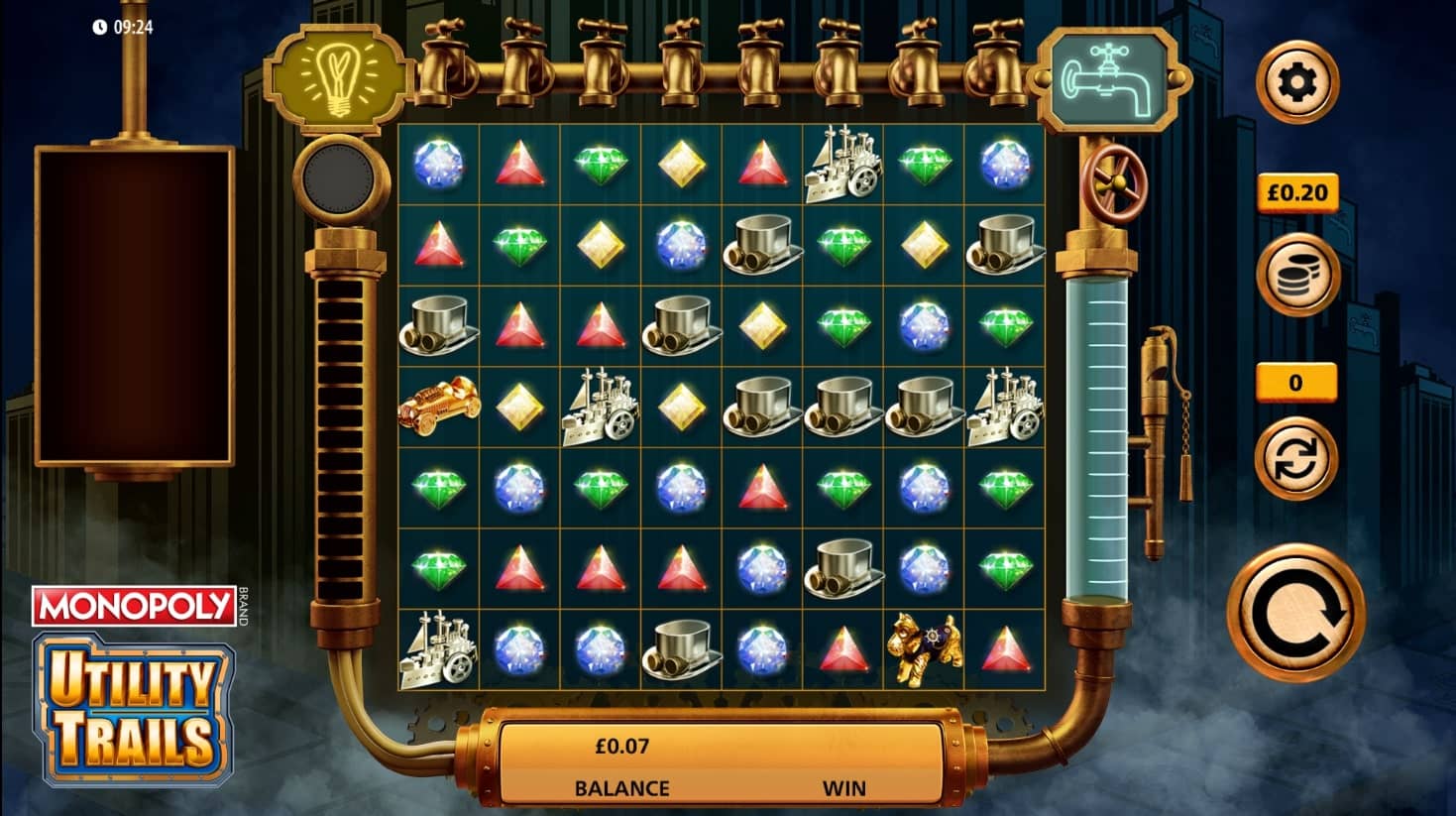 A 3X3 Community chest may land on the grid during any Spin or Cascade.

This will open, revealing a random Cash Prize.

The values available within the Community Chest is between 5x – 1000x

You’d be laughing all the way to the bank if you landed the 1000x, but then again you’d probably just walk down the street and land on Mayfair to find out your mate has put a hotel on it.

Free Spins in Monopoly Utility Trails are divided up between the Water Works bonus and the Electric Company Bonus.

To land the Water Works bonus, you’ll need to fill the water meter to the right of the board.

Every time you land a Water Works Symbol, then the meter will increment by +1, and the same can be said for the Electric Company Bonus with Electric Company Symbols. The meter for this is to the left of the reels. 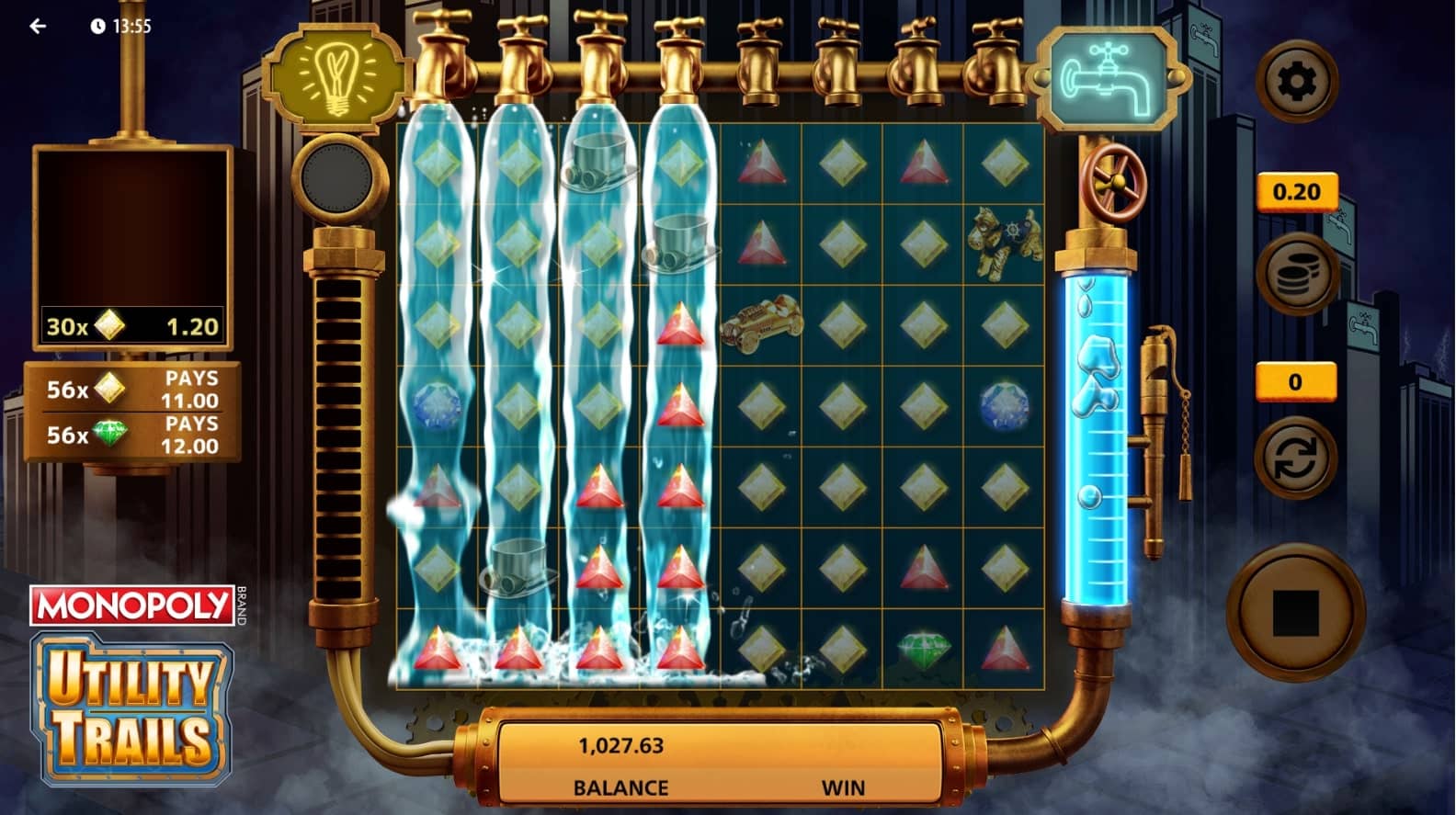 During the Water Works Bonus, the reels will spin until a Winning Cluster is found.

Any winning cluster is locked into place, and it will remain for the duration of the bonus.

Non-winning symbols will cascade, and new symbols that contribute to an old winning cluster will also stick, or possibly create new clusters.

The taps located above the reels may active, throwing out one of two modifiers.

If multiple clusters of different symbols exists, then all clusters will be upgraded to match the cluster with the highest paying symbol.

If all clusters are the same, then they will be upgraded to the next highest paying symbol according to the paytable.

During the Electric Company Bonus, the symbols on the board are replaced with Property Cards, Colour Tiles and Chance Cards.

You will be awarded 3 lives during this bonus,

Any Property Cards that land will hold for the duration of the bonus, and any cluster of Colour Tiles will explode and disappear. If they match any of the colours of the property cards, then the property card will double its value.

Property Cards will display values, which are a multiplier of your current bet. This value can range from 0.5x – 25x your bet

Chance cards will flip, revealing either a House or a Hotel.

Off the Rails Jackpot

The off the Rails Jackpot can be triggered in the Base Game if the entire board is filled with Wilds.

This is possible when 1 Golden Wild covers a position on all 4 corners of the reels.

The Off the Rails Jackpot can also be triggered by 10 consecutive cascades in the Base Game.

In the Off the Rails Jackpot it is possible to get a fixed prize of 20,000x!

Where to Play Monopoly Utility Trails?

Monopoly Utility Trails is out now and available to play at most New Casinos!

Monopoly Utility Trails can also be played at Videoslots and Party Casino!

Both Videoslots and Party Casino are great and reputable Online Casinos with a host of amazing and diverse games.

Branded Games can sometimes be either really good or laughably bad, but Monopoly Utility Trails is actually a very good and capable game.

The statistics look great with an RTP of 96.61%, and the prospect of two different bonuses plus the chance to trigger the Off the Rails Jackpot is really something to be excited about.

The only real downside is lack of reel modifiers. Being a Cluster Pays game, Monopoly Utility Trails could have done with a couple of Reel Modifiers that shake up the game a little bit, but other than that there’s no real complaints.

You’ve got to take win potential like this with a pinch of salt, because in reality nobody will ever probably see it. However, rest assured that the Monopoly man is generous, and nurturing his trusty and dependable utility workers is entirely possible in a game that could absolutely hand out some great wins.