The year is 1919 in Birmingham, England. Just after the first World War, the series follows the exploits of Tommy Shelby and his family and is loosely based on a real 19th Century gang with the same name.

Many of you will be very well acquainted with Tommy Shelby, the crew, the Garrison Pub and the famous razor blades sewn into the cap that gives them their name. What you might not be acquainted with, is Pragmatic Play’s first branded game Peaky Blinders Slot  based on the BBC TV Series.

Pragmatic Play have released some cracking games in the past, including the Enticing Dog House, Fruit Party, Great Rhino Megaways and many, many more.

We’re swapping puppies, Fruits and Africa for Small Heath Birmingham, and it promises to be a real treat for those soft lads among you who fancy yourself one of the gang, walking around in 2020 wearing Flat Caps, and braces.

All jokes, and your questionable sense of modern-day fashion aside, let’s see what this game has to offer.

By Order of Pragmatic Play

The theme and visuals for The Peaky Blinders game is simple, yet does its job in conveying the setting well. The show was set in Birmingham and based around Small Heath, which is an area to the known for factories, pubs, and rows upon rows of Victorian terraced housing for the working classes.

In the background, you can see these terraced houses, as well as sound of the factories, with a subtle glow of sparks from grinders/tools either side of the screen portraying the men at work within them.

The music has an air of seriousness to it, which sums up the theme of the show pretty well, serious and down to business.

Peaky Blinders has 5 reels, and works along 20 set pay lines, so as well as an enticing theme from your favourite show you’ll also enjoy a classing slotting experience.

3 or more matching symbols across any of these pay lines will form a win, and betting ranges from a low 0.20 to a high 100, for those of you who really fancy having a punt in Tommy’s Betting Shop.

Bets can either be displayed as a cash, or coin, and is customizable by Coins Per Line and Coin Value.

As for Symbols, from order of highest paying to least, we have Tommy Shelby, Arthur Shelby, Polly Gray and Michael Gray. Low Paying symbols are our classic A, K, Q, J & 10. There is also a Wild that substitutes for all symbols except Scatter and Feature Symbols.

Unfortunately, it looks as if the symbol pay out is quite low, with a full line of top Symbol Tommy offering a meagre 20x your stake, with the same being said for the Wild Symbol.

Maybe it’s in line with the type of classical game it is, and we’re just used to top symbol doing absolute bits when you get a few of them in a line from games with more modern mechanics, or tonnes of them in games like Megaways Slots where there is room for lots of them.

Peaky Blinders does however, offer two base game features that make things a little more interesting, both of which up the excitement a little, where you’ll forget about the low paying symbols and look at the broader picture. 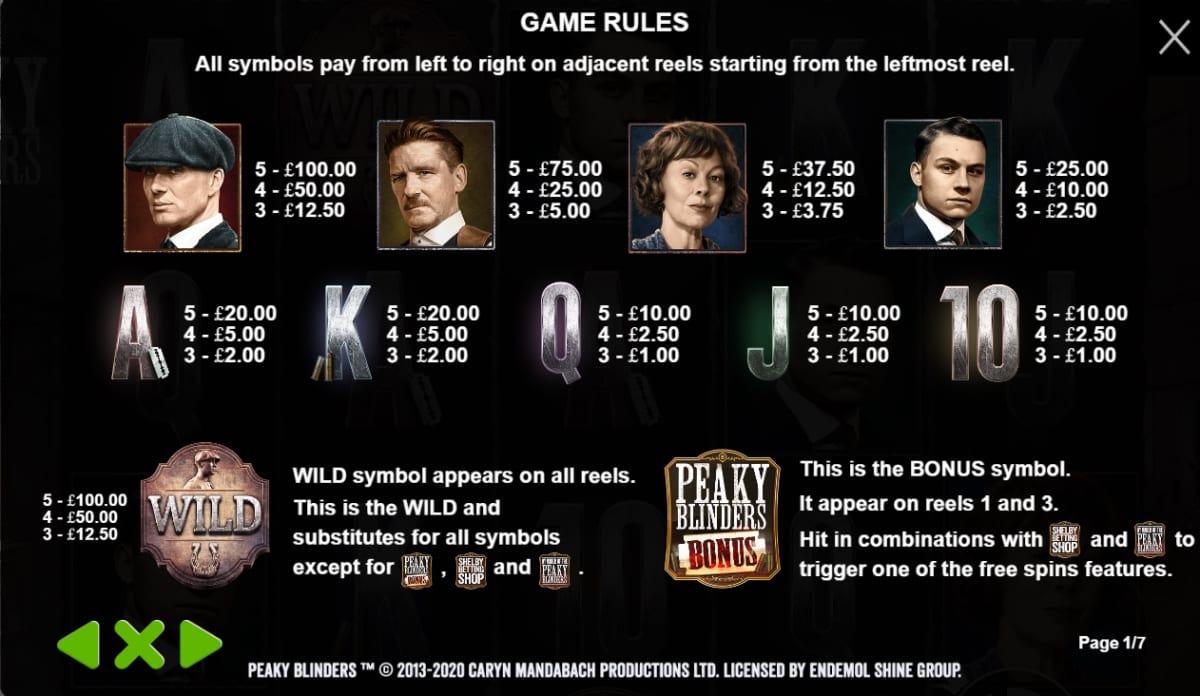 By Order of The Peaky Blinders

A ‘By Order of The Peaky Blinders Symbol’ can land on reel 5, and the feature is triggered when this lands without 2 bonus scatters on reels 1 and 3.

When the feature happens, the game will first pay for all win lines on the screen after which all character (premium) symbols and Wilds remain in space, and a re-spin is triggered.

After the respin, all character and wild symbols transform into one random character, and the game will once again pay for win lines according to the pay table.

The ideal situation here, is lots of premium symbols in place when it triggers, and lots to land on the free spin. Best case scenario, they all turn into Tommy Shelby where you’ll see the most return.

When this feature occurs, all character (premium) symbols get a random direct money award. The game pays the total value of all money awards and win lines on the screen.

Similar to the other feature, ideal situation here is lots of character symbols on screen, and lots of Tommy Shelby, as he’ll hold the highest paying money award.

By Order of The Peaky Blinders Free Spins

During this bonus, more of the Peaky Blinders symbol are present on reel 5, and landing it will trigger the feature.

It’s pretty much the same as the base game feature, with the exception that it will hit more often, due to the presence of more of the symbols require to trigger it, and you’ll get 10 free spins to try and land it as many times as you can.

Same situation here, lots of premium symbols needed when you trigger it, and lots need to land on the re-spin to hit that big money.

The Shelby Betting Shop feature is triggered the same way, as the other bonus, with the exception that the Shelby betting shop symbol needs to land on reel 5 instead.

8 free spins are awarded for this game, and during the round more of the Shelby Betting Shop symbols are active on reel 5, and landing it will trigger the feature.

This one can be great, but you’ll want to land the Shelby Betting shop often, and you’ll be wanting of lots of premium symbols on screen when you do. 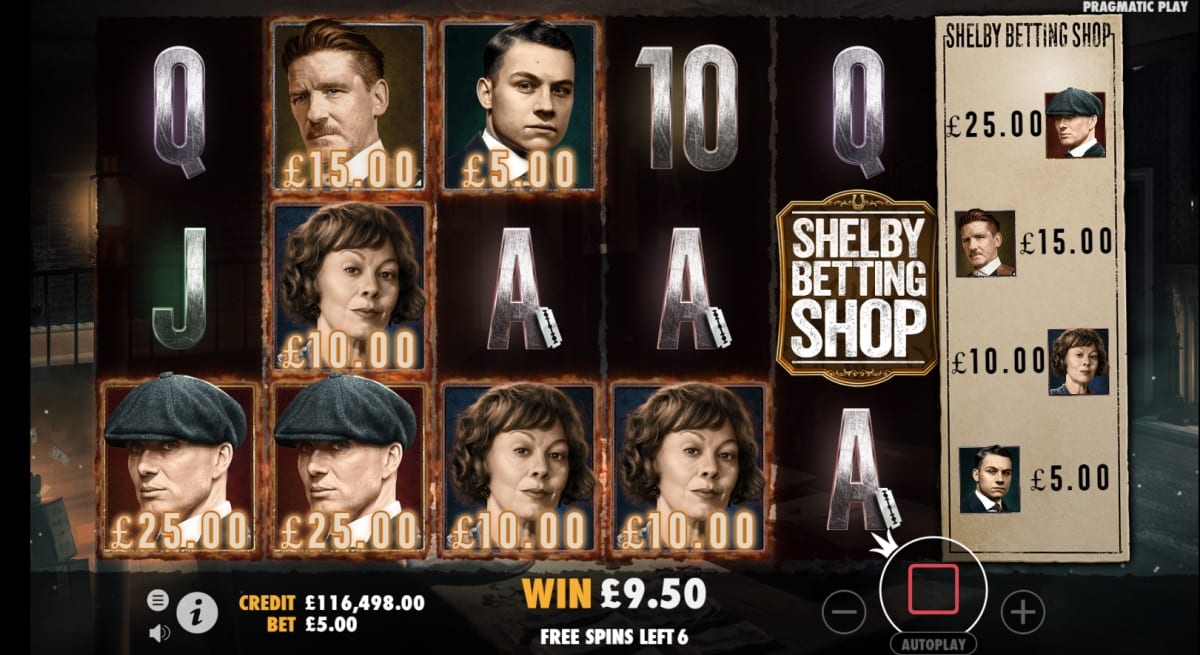 A branded slot is always a risk, sure Peaky Blinders has an absolutely massive fandom to behold, and they’ll no doubt absolutely love to roll with Tommy and the Crew in this game. On the other hand, for anyone that hasn’t seen the show, or didn’t like the show, this slot will fly right their head.

That is the risk you take when you dabble in something with a very specific target audience.

Pragmatic Play has chosen a classic sort of style for this game, and it will be appreciated by those looking for that kind of authentic experience.

Features can pop up fairly regularly, so you won’t be wanting for too long of a little bit of excitement to roll through, however, they don’t always do too much.

As mentioned, symbols pay quite low, so you’ll need these aforementioned features to pull their finger out a little bit if it’s to captivate you enough to stay. The bonus rounds are okay, but they’re basically the same as the base game features, and just show up more regularly.

The Free spins you get do pay along the conventional set pay lines, but really, all they are is a means to get you into the Betting shop and ‘By Order’ feature.

The game is fine if you’re looking for something a little more casual, maybe something to play for a while to appreciate the show, and you’ll definitely see a few of your favourite characters and notice a few bits of dialogue while you do so.

The real problem with the game is the Volatility X max win. The max payout is set at 2,022x, which is nothing to snivel at, regardless of the stake, but seems very low when you look at the 4/5 volatile rating Pragmatic Play has given this game. With Volatility that high, you’d maybe expect it to be higher.

Overall, this game will sit well with the fans for a little while, and might even be fun for everyone else too, but in the end, the game just doesn’t have enough of the diverse features or bonus that we see from modern games today and doesn’t offer anything attractive enough in terms of big wins to counteract it.

It definitely won’t be a top 10 of all time for players, even those invested in the show 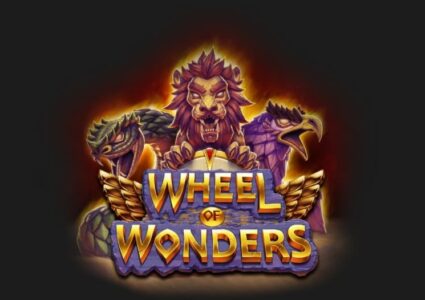 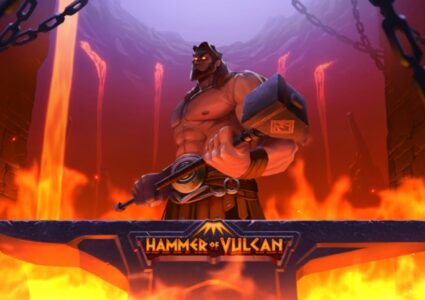