Africa is truly a magical place, surrounded by beauty and nature… and though trying times won’t get you there to see it for yourself, you’ll be happy to know that you can enjoy this beauty from afar with Raging Rhino Slot by WMS.

The serene tranquillity and wonder of the plains of Africa knows no equal, and what more could be more serene and tranquil than a herd of 2 tonne rhinoceros rampaging on your screen? Nothing at all.

Raging Rhino Slot started off as a cabinet machine, and you may recognise it already, but it’s been ported digitally by SG Digital for all to enjoy online.

The theme for Raging Rhino Slot is simplistic and subtle, yet it conveys an African setting well enough that you know where you’re meant to be.

The sun-soaked plains of a blistering hot savannah are all that is given in terms of visuals, but the music brings it to life a little bit more with a wild/tribal sounding song that is very easily attributed to the motherland that is Africa.

The symbols themselves breathe further life into the game with various different wild creatures making an appearance.

There’s nothing really fancy at all about the design of Raging Rhino, yet a simplistic approach can sometimes be just as effective as flashy and cluttered themes.

Betting options from the game span from £0.40 to £20 with a fair few options in between the two. Generally, it’ll pretty much cover the needs for most players.

Although the difference between 10p/20p/40p is negligible, it makes a difference per spin when it all adds up, so players whose usual comfort zone is the 10p/20p mark are a little out of luck here.

It’s a question of risk vs reward at the end of the day, and Raging Rhino Slot certainly has the potential to reward

As mentioned, the cast and crew of Raging Rhino Slot come in the form of various different Wild animals. Of course, the Rhino is the star of the show in the game, serving as top symbol, but there is also Gorilla, Cheetah, Crocodile and Badger who also count as high paying symbols.

You won’t find any reference to the theme of the game among the bottom paying symbols. These are simply A, K, Q, J, 10 & 9. There’s also a trusty Wild present in the game that can help you connect those wins. 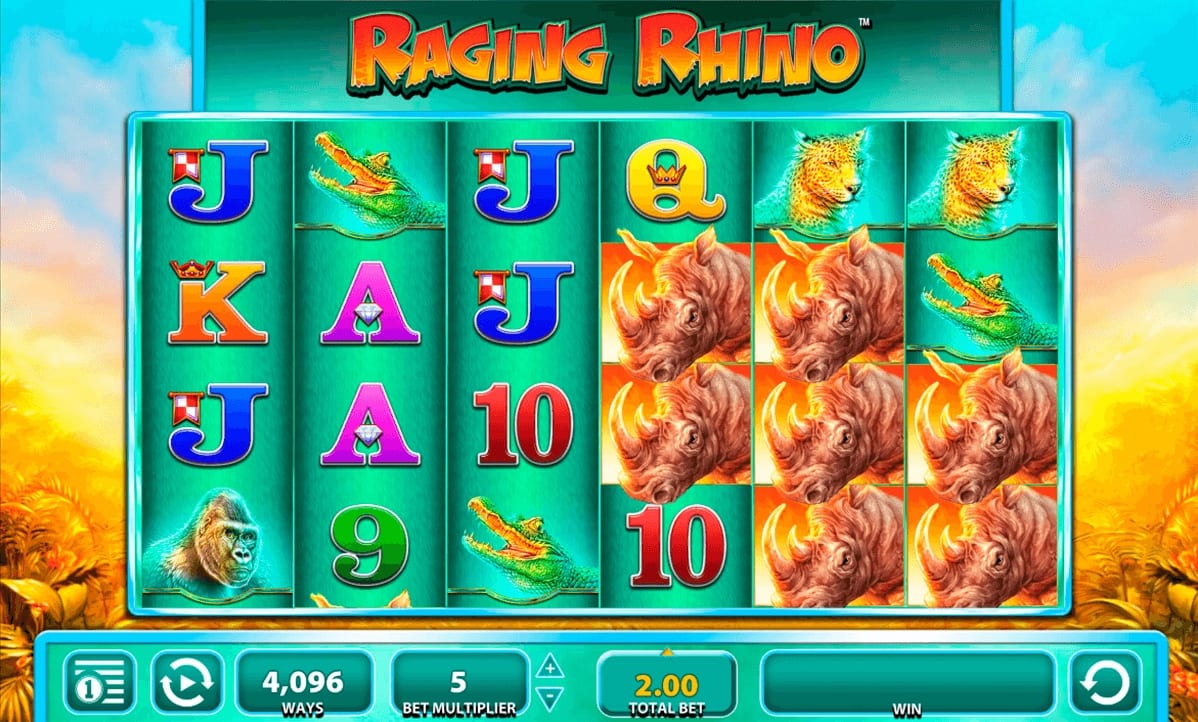 Raging Rhino Slot utilises a simple yet immensely popular pay way mechanic for its game in the form of a ‘ways to win’ mechanic.

Simply put, this means that traditional pay lines are out the window, and that symbols will match regardless of their position on their respective reels, as long as 3 or more match from left to right starting from the left most reel.

Wilds will play a vital role in the Base game in connecting those symbols. These will appear on reels 2-5 only.

Those who prefer a game that is easy to understand will appreciate Raging Rhino. You’ll simply spin away hoping to connect some big symbols all the way across to bank those big wins, which Raging Rhino Slot can definitely do.

Sadly, there’s no in game features to benefit from in the Base Game, so your experience and opinion will depend entirely on how it plays on the day or how persistent you are in your quest to get the Bonus.

If you do manage to get the Casino Bonus, you’ll want to brace for what could potentially be a bumpy ride as Raging Rhino has the potential to go big!

The 6 Scatter reward is huge on its own, and you wouldn’t have even started the bonus yet if you triggered the Free Spins with 6. Not to worry if you landed the standard, and more likely outcome of 3 Scatters, Because Raging Rhino Slot can certainly go big anyway.

The shining feature in the Bonus is the Wild symbol, which now has the ability to turn itself into a Wild 2x or a Wild 3x. It’s hard to fathom how much these count when you manage to connect Rhinos across the screen to these pumped up wilds, or any symbol for that matter. 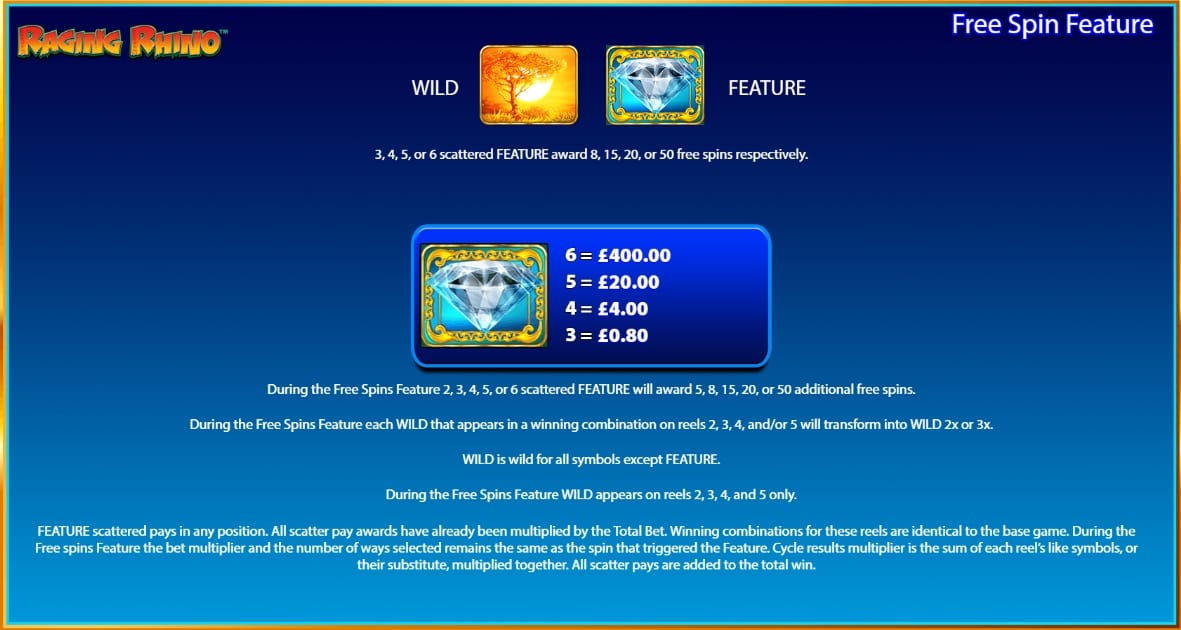 Raging Rhino Slot is a solid instalment from WDS that will go down as a favourite for many for a long time to come. Although the game is rather starved of features, and is rather simple in the Bonus, its undeniable that the rewards can be massive.

A max win of £250,000 is stated the be possible, and of course this is entirely dependant on stake. But if you break it down then it works out that the reward can be upwards of 4166x, which is nothing to scoff at.

The game may not appeal to some that are looking for all the thrills of different features and bonus games that add a lot more than this one does, but Raging Rhino can potentially offer 50 Spins which can be more exciting than any feature you can think of.