Rich Wilde and the Amulet of Dead Slot

Play’n GO and our favourite daring adventurer Rich Wilde are back for another cunning expedition in Rich Wilde and the Amulet of Dead Slot.

Rich has been having strange dreams every single night for the past 10 days, and he knows that there is something from his past that he needs to find out about.

His adventure takes him to the Temple of Ramses II where it started all them years ago, where he finds a mysterious Osiris pendant. That evening, Rich has another vision, but this time he is awake.

Rich Wilde and the Amulet of Dead Slot will see Rich judged for his past actions, with his indiscretions recorded in the legendary Book of Dead. Rich must travel between the realms of the living and the dead in this exciting new game.

Riche Wilde and the Amulet of Dead Slot looks to be packed full of all the action that we know and love, with additional extras to keep the style of the game fresh and exciting.

At a glance, you’d be forgiven for thanking that Riche Wilde and the Amulet of Dead is a copy and paste of Legacy of Dead and Book of Dead, but you’d be wrong.

There are plenty of Wilds and Multipliers to be had in this new slot, with appearances from the God of Magic and Wisdom Thoth, who can bring stacked wilds into play. That being said, there are a lot of aspects of the game that are very reminiscent of the older games, but that can only be a good thing.

Book of Dead and Legacy of Dead are incredible games that are still very much relevant today, with a lot of requests on stream for both of these amazing games with huge potential.

Can Play’n GO do justice to two legends with the introduction of another? Let’s see what Riche Wilde and the Amulet of Dead Slot has to offer!

Riche Wilde and the Amulet of Dead Slot Theme

The theme of the game is one of the reasons why you might find this slot and past games remarkably similar.

Starting with the reels, you’ll notice that all of the symbols from the first game have once again made a return, with the exception of a couple of special additions. One exception to the similarities shared between this game and its predecessors is the background.

In the background you’ll see the Temple of Ramses, which is where our curious explorer Riche is headed, travelling between realms for answers about his past.

Overall, you can tell very much so that this game sits within the same family as Book of Dead and Legacy of Dead, but if anything that just excites you when you think about how fond you are of them games.

Betting Options for Riche Wilde and the Amulet of Dead are exactly as you remember them, with a broad variety of options that covers the basis for all kinds of players.

Betting options start at a low point of £/€0.10 and go as high as £/€100. There are plenty in between the two, so just like the old games, there is definitely an option for you.

Betting can be customized heavily in this particular game, with the option to increase or decrease coin value or coins themselves, which will in turn change your total bet. You can also change how many lines are in play

As mentioned, symbols are the same as Book of Dead, with Egyptian Gods as sought-after symbols. They’re not quite as sought after as Riche Wilde is though, who comes in yet again as the highest paying symbol in the game.

There are Wilds in the game, and more so than you’re probably used to. Thoth will be a stacked Wilde, as will the Sacred Amulet which also acts as a Scatter.

Riche Wilde and the Amulet of Dead Slot is played across 10 pay lines, which is unsurprising given both the history of these games and the 5×3 reel set up.

One big attraction about the game is how good the pay outs can be. It’s common knowledge at this point that the Book of Dead series of game is very generous when connecting a line of high paying symbols, and not much has changed in Riche Wilde and the Amulet of Dead.

Things start to feel a little newer when you first encounter Thoth, who can appear as a Stacked Wild.

Thoth can appear on the centre three reels. Thoth not only acts as a Stacked Wild, but he will also multiply your wins.

This could result in some seriously impressive wins, and it will undoubtedly be a sought-after feature. 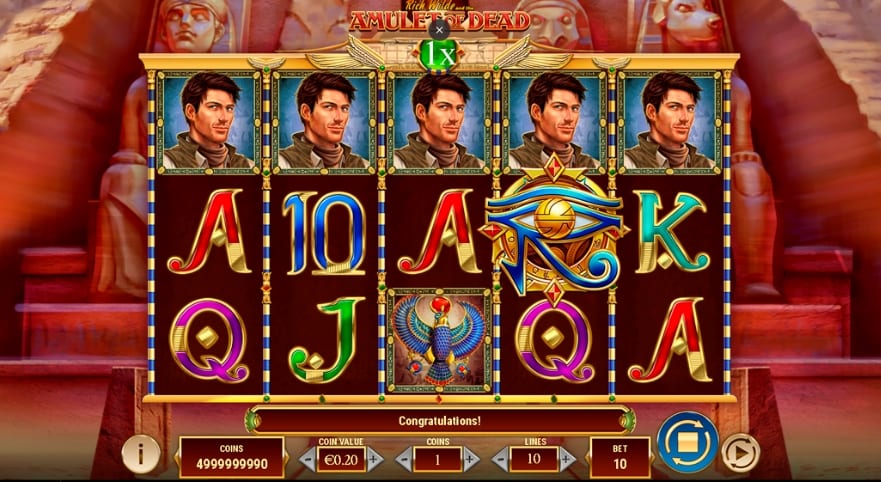 Free Spins are activated when 3 or more Scatter Symbols land anywhere in view.

You’ll initially receive 10 Free Spins, but you are able to re-trigger if you land 3 more Scatters anywhere in view during the Casino Bonus.

Before the spins start, a symbol will be randomly chosen to act as a special symbol for the bonus.

If you get a low paying symbol, then 3 or more are needed in view to trigger a stacked version of that symbol and activate the pay anywhere mechanic.

If you get a high paying symbol, then you need only 2.

Riche Wilde and the Amulet of Dead Slot has employed a seemingly identical feature to that seen in previous games, but we all know how well this bonus can perform with the right set up.

The implementation of 10 Spins rather than 8 seem to indicate something a little worrying though. Book of Dead allowed for 10 Spins, but you were stuck with your symbol for the entirety of the round, while Legacy of Dead gave you 8, but a re-trigger gave you an additional symbol.

The Legacy of Dead way of doing things was better and infinitely more exciting. There’s nothing worse than being stuck with a Jack symbol for the whole round. 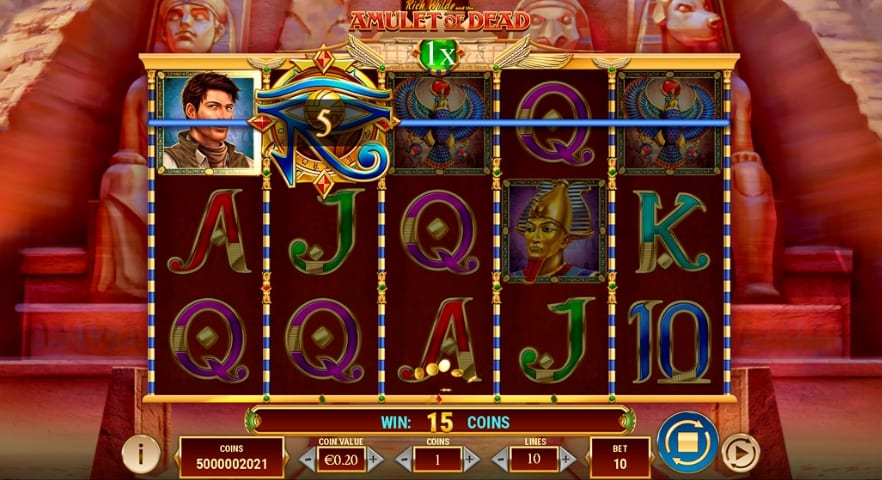 Riche Wilde and the Amulet of Dead Slot looks like it’s something to be excited about, with tried and trusted gameplay from proven games and the addition of new features.

Big wins of over 2,500x can be achieved, and the Thoth Wild makes things a lot more action packed than we’ve seen previously.

RTP for the game is 96.29%, which puts it ever so slightly above Book of Dead, but not significantly so that you’ll even notice a difference, and the 7/10 volatility will please those who find more excitement from higher volatility games than they do from low.

Overall, Riche Wilde and the Amulet of Dead Slot certainly looks impressive, but can it take over from its ancestor as one of the most popular games around? That remains to be seen.