Get Ready for Snake Arena Slot, a modern game with features reminiscent of a classic mobile game. Cowardly Knights and Fearless Snakes go head to head in battle with Relax Gaming’s medieval release, and only one may prevail.

Relax Gaming are a provider on the rise, and have been releasing some real diverse and imaginative games. From Temple Tumble Megaways to Money Train and Ignite the Night, there’s something for everyone to try.

Snake it ‘til you make it

Snake Arena is a medieval themed 5×5 video slot. The design is a classic cartoonish aesthetic atop the watchtower of a middle-aged castle, with dark age music playing a prominent battle song.

The symbols on the reels have been thought out well and impressively embody various treasures and items from that era. Overall, the theme and music has been designed to a high standard and will get players interested in giving this one a go.

First impressions are important after all, many of us are guilty of loading up a game and being put off straight away by the dull or unsightly design.

The game is simple and easy to understand, Snake Arena works on 30 pay lines which are always active, meaning that players don’t need to worry about lines, bet per lines etc.

Speaking of betting, the stake options for Snake Area will start from 0.10 for those who like to play it safe and goes as high as 100 for those high rollers.

There are 10 symbols in total and each vary in value, at the top we have the crown of a Monarch with the bottom symbol being a lowly silver coin.

The two other symbols are the Snake himself and the Knight, both of which act as Wild symbols.

Those outside the UK will have access to a bonus buy option. This is available for 70x your current stake and the theoretical RTP is 96.25%.

The base game is quite simple, you’ll win if 3 or more matching symbols occur on any of the 30 set pay lines, and wins will be evaluated consecutively on a pay line starting from the left most reel.

As mentioned, The Snake and the Knight will act as Wild symbols and will substitute for any other symbol. The Snake Wild will cover 3 spaces vertically if it appears fully in view.

The Wild Chase feature can randomly appear during any spin. The Snake will peek out above one of the reels, while the Knight peeks out the bottom of another. If both happen to appear on the same reel, then the snake will dart across the reel in pursuit of the Knight making the reel a Wild Stack.

If the Snake peeks out above a different reel to the knight, both will disappear and appear again above and below a different reel. The Snake will get 3 tries to successfully appear on the same reel as the Knight, if unsuccessful, the round will conclude and all possible wins are awarded.

The process is repeatable however, so if the snake lands on the same reel as a knight, then you’ll get 3 more tries to find another before the round will conclude. The Wild Chase feature awards 1-5 wild reels.

A nice in game feature, and it has the potential to really land you some nice wins if the snake successfully turns a few of the reels Wild.

Free spins in Snake Arena will be triggered when the Snake Wild appears on reel 1, with a Knight landing anywhere on any other reel. The Knight hilariously cries out in fear as he realises his impending demise, and the free rounds will begin.

The Snake will start off covering 3 spaces, and will slither over to the Knight, devouring him and in the process, adding one extra space to its length. On each spin, wins are calculated and paid before the Snake pursues the Knight, so the extra Wild you get when the Snake consumes a Knight will come into play on the subsequent spin.

The Knight himself is Wild though, so if connected to a win line you’ll benefit from him before he meets his grisly end.

If the Snake fills up all positions on reels 2-5 then the feature will end and an additional prize of 1000x your current stake will be awarded. 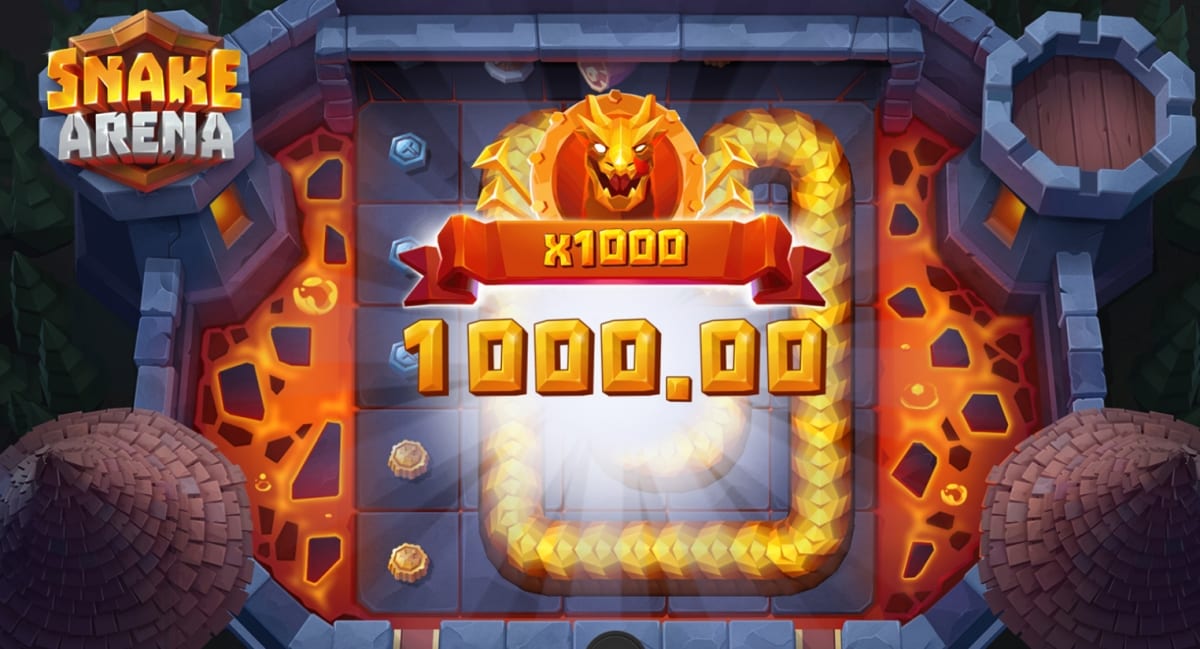 Snake arena is a fun, feel good game that will have you reminiscing of the countless hours spent playing snake on a Nokia phone. Its design is impressive and aesthetically pleasing, and ticks the box for that all so important fun factor that we all want from games.

The Wild Chase feature is an exciting base game addition, and can result in some nice hits if successful in landing a few wilds.

The Bonus is the best part of this game by far, embrace, personify and embody your inner sadistic nature as you cheer on a giant serpent as he makes short work of seemingly defenceless Knights, and collect some big wins on the way.

The maximum win is often advertised as 1000x, but it’s more like 2,758x. This can be achieved by collecting the wins generated by the Snake Wild at the pinnacle of its size covering reels 2-5 in the bonus, as well as the 1000x reward available for getting that far.

The maximum win isn’t the biggest we’ve seen, especially from a ‘high’ volatility game, but it’s still sizeable. Getting there will require some serious luck though, as more often than not the snake will clumsily run into its own tail as you watch while yelling profanities at the screen.

Modern technology doesn’t seem to be as durable as a reliable Nokia 3310, so it’s advisable to take a deep breath before you settle upon the decision to launch your phone at a wall.

Overall, Snake arena is a hilariously charming addition to the Relax Gaming portfolio, and you’ll enjoy the retro take on a modern game.