Reelplay are here and they bring with them two of some of the favourite things we love from games, The Wild West, and Megaways in Big Bucks Bandit Megaways Slot!

Set in the final frontier, disarray and chaos prevails where the lines between right and wrong are blurred and intertwine…It’s every man for himself.

Today you’re a gunslinger through and through, will you make your fortune?

Reelplay have made their fair share of Megaways Slots in the past, including Hypernova Megaways and Atlantis Megaways, both of which had them core values needed in a Megaways game to make them good.

Reelplay have chosen a safe theme to go for with this instalment. The Wild West is widely used in TV, Movies, Video Games and Slot Games, and for good reason.

It’s an era of time that has fascinated modern culture for years and still does to this day. In the background you can see a simple canyon, desolate and desert like, which pretty much conveys the them of the Wild West.

The music too conveys this theme, and is classical in what you might expect from a game like this

Big Bucks Bandits Megaways has 6 reels, and 3 or more matching symbols will form a win starting from the left-most reel. Each reel is capable of holding between 2-7 symbols.

All of these together will determine how many ways to win there are. Ways to win varies every spin depending on how many of these symbols show up on each reel, and can reach that much desired 117,649 ways to win.

The top reel adds a symbol to the top of reels 2, 3, 4 and 5, and is common among Megaways games and ups the ways to win a little.

Bettings options are pretty standard for a Megaways game. The bottom bet is 0.20, with the top bet being 25. These aren’t as extensive as you might see from other games, but it definitely covers the needs of every type of player.

There are 10 paying symbols in the game, top of which is a rugged looking cowboy with a golden frame. Other top symbols include a woman, a bandit and a horse.

Low paying symbols can get a little confusing, as they don’t follow your conventional A, K, Q, J formula.

From highest to lowest paying, these are…Guns, Boots, Cowboy Hat, Flowers, Skull, and a Bottle of Moonshine. A wild is also present that will substitute for all except scatter symbols.

Players outside of the UK also have the option to buy their way into the bonus, which is available for 60x your current stake.

There isn’t tonnes going on in the base game, especially in terms of in game features. It’s not a deal breaker though, lots of Megaways games don’t have this, and just like them, you’ll be spinning away in pursuit of the Casino Bonus.

Just like any other Megaways game though, you can enjoy spinning with up to 117,649 ways to win, which is achieved when 7 symbols occupy every reel.

Anyone that plays these types of games know that Megaways has some serious potential on its own to bring in some nice wins just through cascading reels.

Winning symbols will disappear from the reel, and new symbols will fall in via a cascade to fill their space.

Symbols that fall in will be the same size as the ones that disappeared, so the Megaways won’t vary until the next spin. Symbols on the top reel will move left if there is room to do so.

So you can get a good idea if a win will occur based on whether this movement will create a winning combination.

There’s nothing more gratifying than when you first learn to read Megaways, despite how simple it seems now, and you see them wins before they even hit. 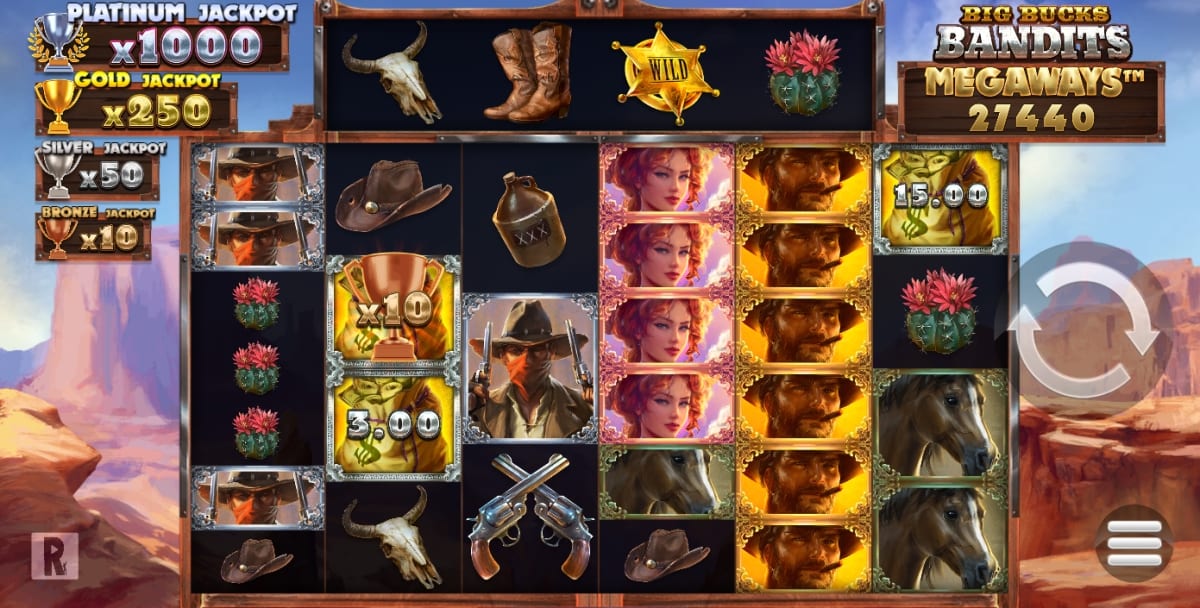 The Jackpot Respins Bank Heist is triggered when 6 or more scatters appear, these are represented by bags of gold, and hold a monetary value. 3 Respins are given, all scatter symbols are held, and all remaining positions respin.

The round will end when all spaces are filled, or 3 respins go buy without another scatter occupying an empty space, but the spins will reset to 3 if a space is filled.

Upon completion of the bonus, all wins are tallied up and the Double Cross Feature begins.

Each Scatter in the Jackpot Respins awards either a prize or a Jackpot. Jackpots come in the form of either Platinum, Gold, Silver or Bronze trophies. These can land any time during the bonus, and pay as follows

That sneaky bandit has the bottle to try and line his own pockets with gold, the nerve…lets shoot him.

Here you get the chance to have a shootout with him to get all of his gold too, of course you also have the option to walk away at any time with your current winnings. Here’s how it works.

A wheel will appear with green and grey areas, the wheel will start to spin, press the stop button where your fate will be decided.

Landing green will progress your win further, and landing grey will decrease it. The multiplier will always start at 1x.

The Win/Lose Feature Is As Follows 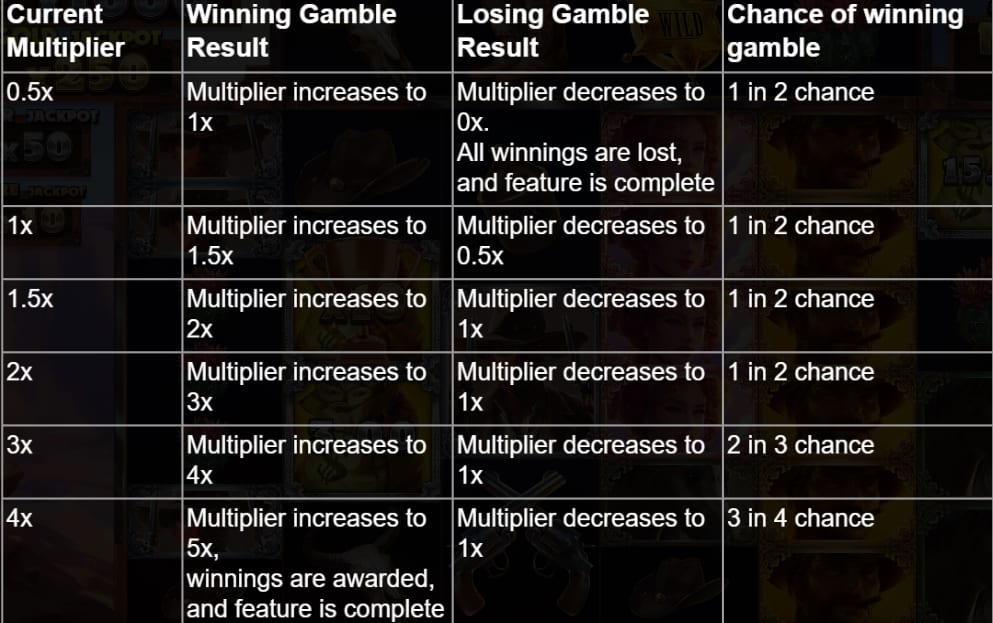 You can continue to gamble as long as you haven’t reached the 0x multiplier, or the maximum 5x. Maximum win here is 10,000x.

Enter at your own risk, just to reiterate, you do not have to gamble any of your winnings from the Jackpot Respins and can walk away with 1x. Play with what you can afford to lose, and responsibly.

Big Bucks Bandit Megaways is very similar, if not identical to previous Megaways instalments from reelplay, and if you loved them, you’ll love this.

Unless you happen to hate The Wild West theme that is. If you love the theme, and most do, you’ll probably quite enjoy it.

At the end of the day, it’s a good game, but there’s better out there. Both Money Heist and Money Heist two offer a similar bonus, but with a lot of enhancements that will make it both more interesting and lucrative.

That’s not to say this isn’t a good game in its own right though, the gamble feature definitely makes it more interesting, and is probably its saving grace on what makes it appealing.

The game also features some nice Jackpot trophies that are up for grabs, and make the respin bonus that much more exciting.

Overall, it’s not the best Megaways game out there, but it certainly isn’t the worst.