Test your strength, muscle your way up to the podium and smash in the big wins as we rejoice with the return of Buster in a brand-new game from Yggdrasil Gaming.

Another nice touch is that Buster, and the background, will change according to the season, making Buster Hammer Carnival slot the go-to game at Christmas, Halloween, Chinese New Year and St Patrick’s Day!

Buster Hammer Carnival slot is certainly back, and bigger than ever.

Test Your Strength on the High Striker

Buster Hammer Carnival Slot may cause sensory overload with all of the extravagant visuals on screen.

In the background, you’ll see lights, stalls, rides and lanterns. It looks as if the carnival have gone all out on the decorations, but it looks a little empty. Maybe it hasn’t opened yet?

Either way, Reel Play have certainly done a stellar job on the visuals with this one, though the sound is lacking a little bit. It could definitely do with some carnival music, which would really put you in the mood to play the game.

To the left of the screen is our favourite strong man Buster, who is just itching to smash that High Striker for you.

The betting options are rather disappointing in Buster Hammer Carnival Slot. It looks like the lowest option available is £/€0.50, which would write off the game for a lot of people who prefer to play with smaller stakes, like £/€0.10 or £/€0.20. On the other end of the scale, things look okay for those who like to high roll, with a high option of £/€25.00.

The highest paying symbol in the game is Buster, followed by a Target, Hot Dog, and Carnival tickets. Low paying symbols are represented by A, K, Q, J, 10 & 9. There is also a Wild symbol, which the Hammer symbol.

Buster Hammer Carnival is played with 3,125 ways to win in the Base Game, meaning that symbols will connect for a win from left to right, providing that there are 3 or more on adjacent reels starting from the left-most reel.

The main attraction in the Base Game is the Wild Striker Feature, which will trigger when 1 or more Wild Hammer appears as part of a win. 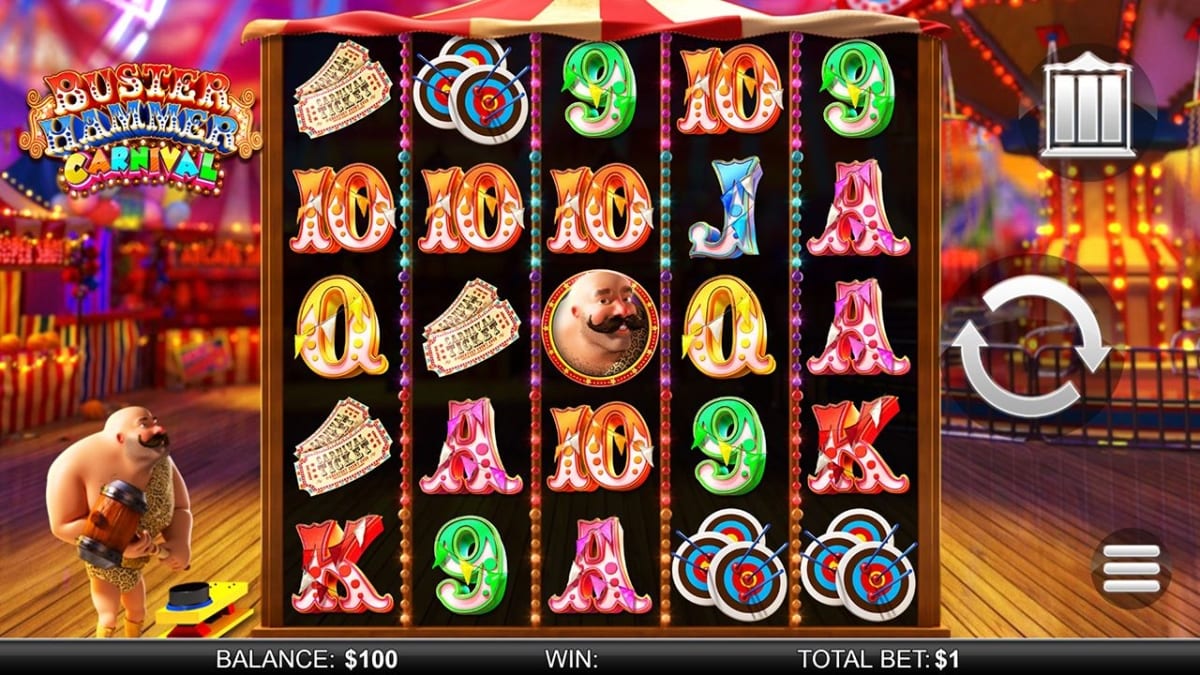 Once one of more of the Wild hammers appear as part of a win, then the Wild Striker Feature will commence.

Buster will hit the Wild Striker once for each reel that a Hammer has appeared on.

After each hit, the Hammer will turn into a Golden Hammer and a hammer will appear at the bottom of the reel where it will expand upwards by up to 5 symbols.

During Free Spins, this can change to expand by up to 8, due to the change in reel height.

Where the Hammers may land in play depends on the Buster Bet chosen by the user.

The Buster Bet allows you to change the reels in which Hammers may appear, at the cost of a Stake increase.

This is a great option to include, allowing plays to change the way that Buster Carnival Slot behaves. This option will also alter the RTP of the game

Buster Hammer Slot has an exciting bonus round, which will trigger when you land 3 or more Scatter symbols.

The key here is once again the Wild Striker Feature, paired with the new and improved ways to win.

The Feature will trigger using the same Buster Bet level that you had in the Base Game, so where they can appear will stay the same.

The Hammers may expand up to 8 symbols from the bottom on the reel where the original Hammer landed, which can result in a lot of connections with the Golden Hammer Wild symbols created by it. 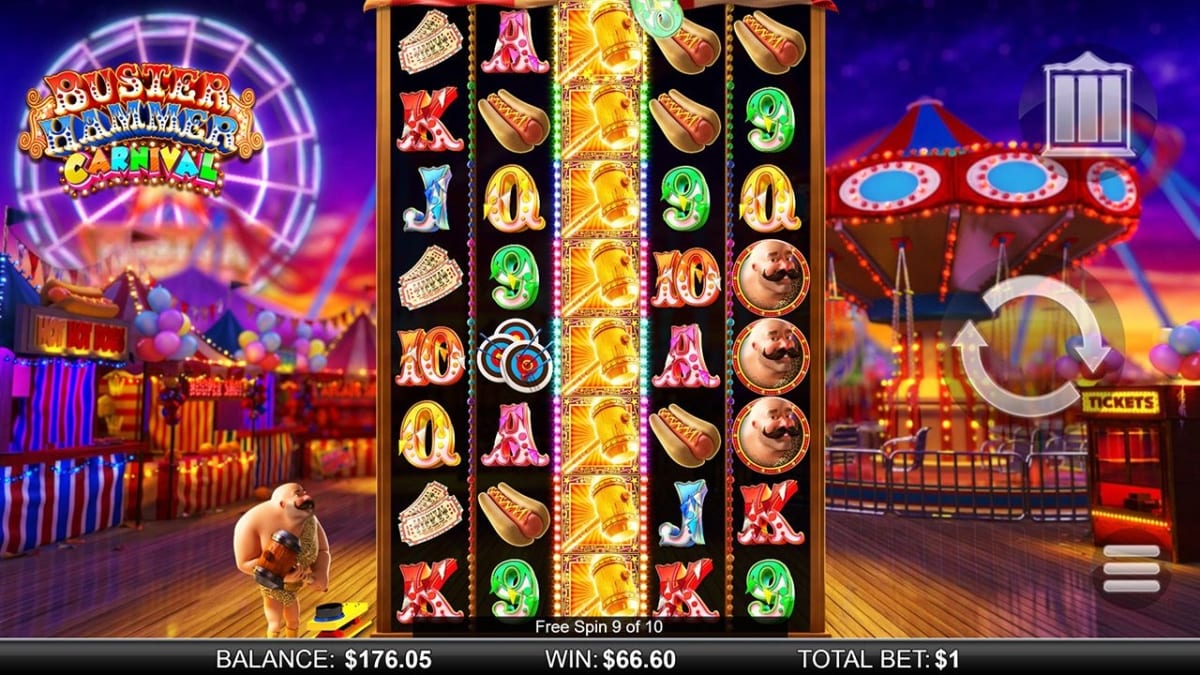 Yggdrasil aren’t lying when they say that Buster is back and bigger than ever. Buster Hammer Carnival Slot is an exciting sequel to the original, capable of some nice wins.

The potential of the game depends entirely on how risky you want to make it, with 3 different Buster Bets to choose from, but the default maximum win is a respectable x8,704.

It’s a shame that you can’t bet lower on Buster Hammer Carnival slot, as £/€0.50 will undoubtedly be too steep for some.

This New Slot can get a little bit boring at times when you get an absence of Hammers, or just a lack of decent growth in Golden Hammers, and it can be hard to land more than one, despite having a bet level 3 activated.

Overall, Buster Hammer Carnival Slot can be an exciting prospect, if the hammers are in your favour, but it’s not a game changer by any means, and it can get tiresome quite quickly.