Sit down and experience a story from the book of Algroth and hear the tale of the mighty Johnan in Johnan Legendarian Slot from Yggdrasil Gaming.

You’ll join Johnan in an epic quest for lost cities, and along that way you’ll fight mythical creatures, cementing your name for all eternity as legend for all to behold. It’s been said that the gods fortold the arrival of a brand new legendary warrior that will surpass even Johnan The Legendarian himself. Could it be you?

With the YGS Masters programme you get such a wide variety of different games, with many studios involved in making compelling and imaginative games.

Peter & Sons are relatively new, so you’d be forgiven if you hadn’t heard of them before, but our interest has piqued on what looks to be something a little bit different (in theme at least)

In this John Legendarian Slot Review we’ll be breaking down the gameplay to see what it’s all about, and what its capable of.

Johnan Legendarian Slot is quite distinctive in its theme. It’s quite compelling in fact.

On the left of the screen you’ll see the Barbarian looking Johnan Legendarian himself standing beside the reels, and the reel borders are wood carved pillars with light from the fire highlighting the impressive shading that Peter & Sons have created in their artwork. The cartoon style gives the game an essence of light-heartedness.

The music and sounds in Johnan Legendarian are mythical and adventurous theme, sounding like something you might hear in an adventure RPG game or a Viking era movie.

Overall, it all looks very professional indeed. Top marks for the theme, style and illustrations.

Let’s look to the Betting options available to you, the player in Johnan Legendarian, as well as the symbols and their pay outs.

Betting options in Johnan Legendarain are pretty vast, so there should be no issues from people who think that their ideal stake option hasn’t been represented.

The lowest option in the game is a mere £/€0.10 per spin, and the highest option is £/€50. per spin. There is plenty of different options in between, with good incremental increases, meaning no weird huge jumps between stakes.

As you look to the pay table to see the symbols and their pay outs, you’ll notice that the Scatter symbol Pays, acting as the highesting paying symbol in the game. Following on from him is the Dinosaur, Bull, Sword and Bow. Low paying symbols in the game are A, K, Q, J & 10.

The Scatter symbol is a Wild as well as a paying symbol.

You’ve got to admit, Johnan Legendarian has some decent pay outs for symbols. Top Symbol (Scatter) all the way across a line will pay 500x.

The pay outs are strikingly similar to some of the pay outs available from games like Book of Dead and Legacy of dead…Any connection? Lets find out.

Johnan Legendarian: The Base Game and Features

To connect a win, you’ll need at least 3 matching symbols (or 2 for the top symbol) to connect from left to right across any of the 10 lines.

There aren’t really any Base Game features to speak of in Johnan Legendarian unfortunately, but the attractive pay outs for symbols makes it worth playing for until you get the bonus.

When 2+ land on the reels, they will be collected. The Scatter symbols are worth 1 point each, and 770 points triggers the Super Free Spins.

Johnan Legendarian is starting to look more and more like a ‘Book’ of game as time goes on, and the bonus only confirms our suspicions… 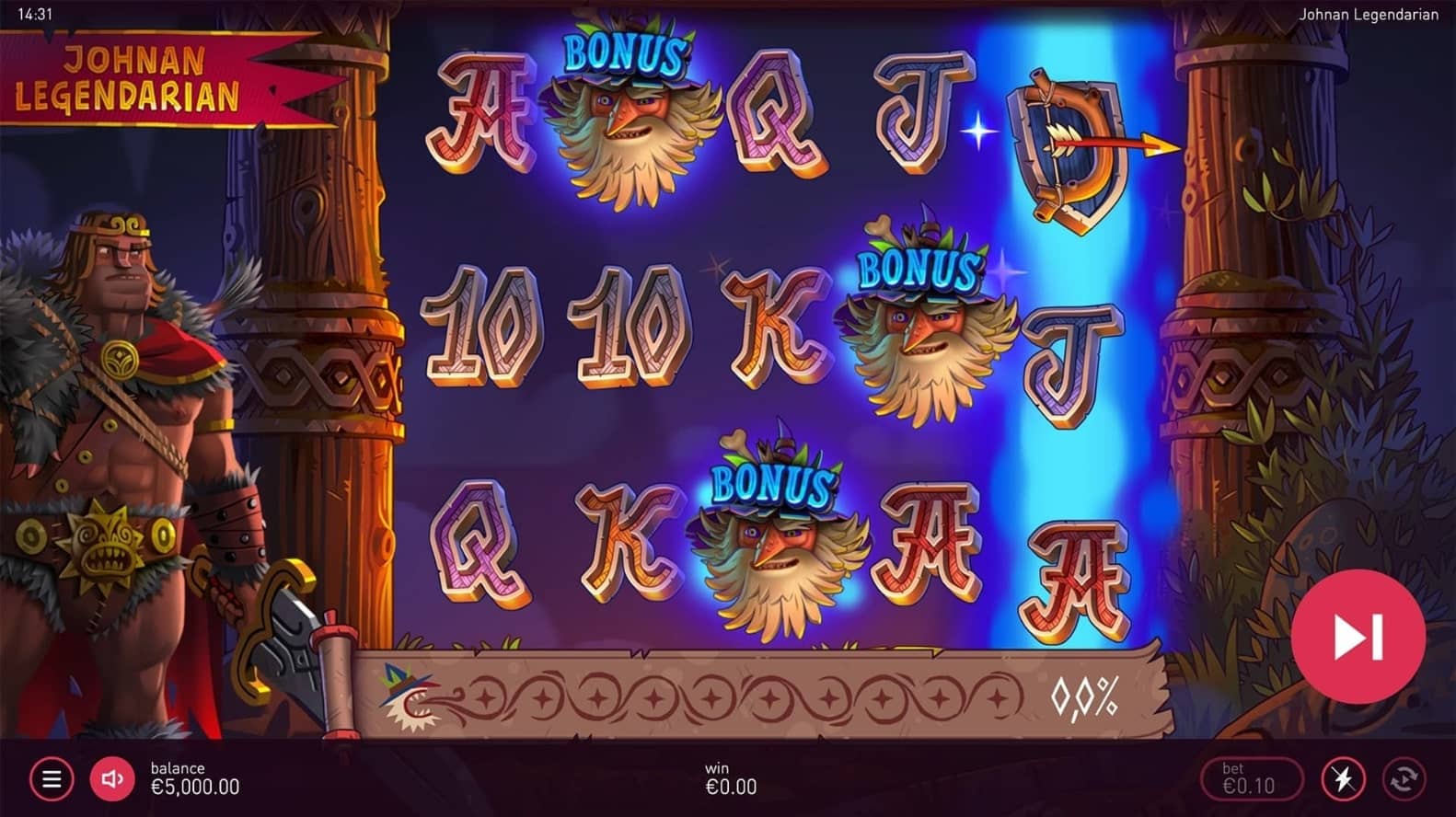 Free Spins are awarded when 3 or more Scatters land anywhere in view on the reels.

Before the round starts, a particular symbol is chosen to become a special expanding symbol for the duration of the round.

When you get 3 or more Scatters during the Bonus, the game will re-trigger and reset the spins back to 10.

It’s a little bit strange that symbols are reset to 10 rather than gaining 10 additional spins. You’ll undoubtedly feel a little cheated if you re-trigger early on and your spin count only increases by 1 or 2 spins.

10 more Free Spins would have made the game much more attractive. In a small saving grace, re-triggering does award an additional expanding symbol.

In Book of dead, you got 10 Spins, but with no chance of an additional symbol. In Legacy of dead you got 8, but you could get extra symbols. The extra 2 spins are appreciated, but you still can’t help but feel robbed of 10 extra spins on a re-trigger.

Johnan Legendarian does have a ‘SUPER’ bonus, but is it super after all? 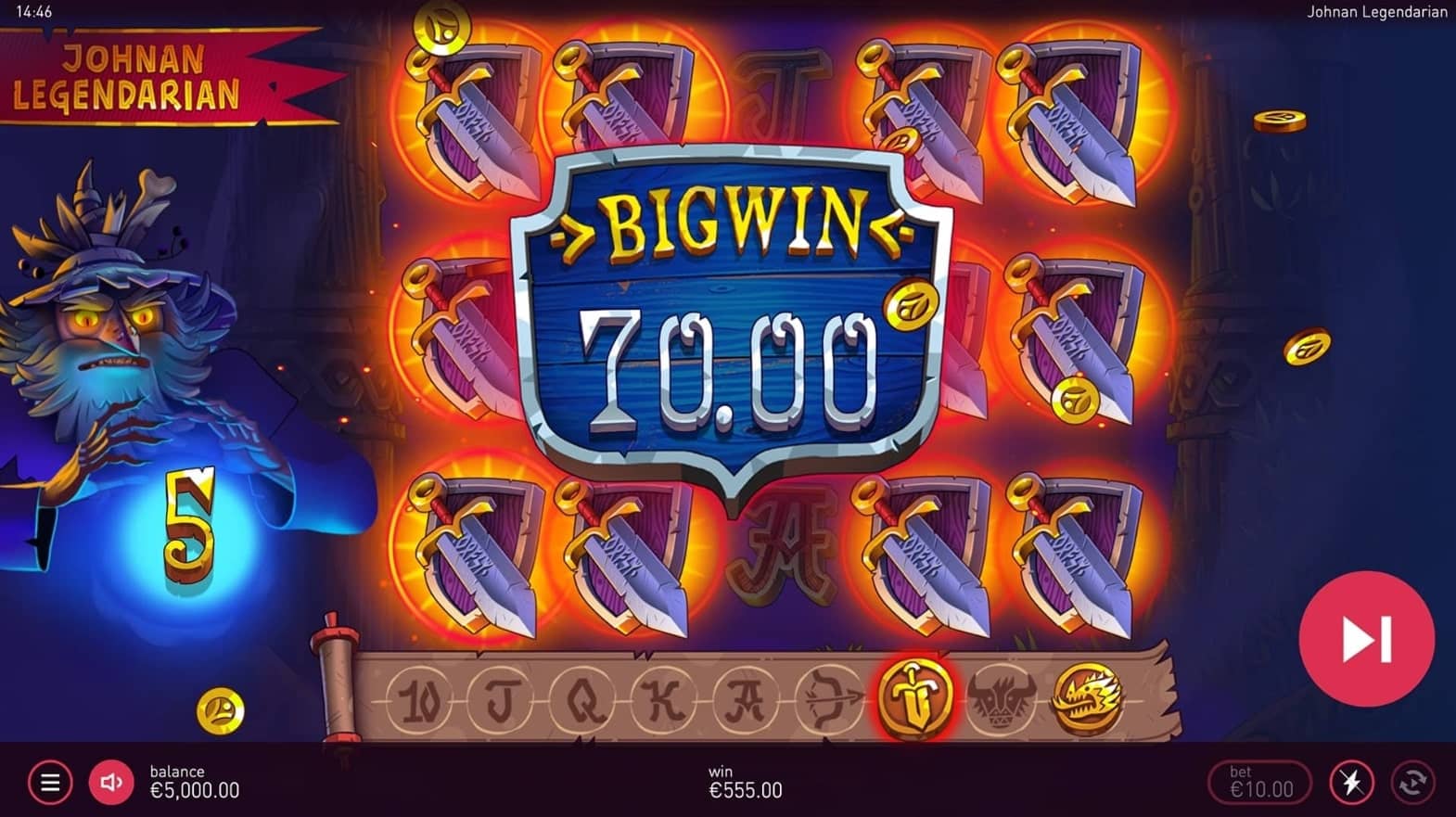 Despite the name, the Johnan Legendarian Slot Super Bonus isn’t as ‘Super’ as it claims,

The differences here is that 10 EXTRA spins are awarded on a re-trigger, rather than the spins resetting back to 10.

That’s pretty much it.

Is it worth it? Not really. That’s a maximum of 335 missed bonuses for a chance at something Legacy of Dead essentially already does, albeit with 2 extra Spins in Johnan Legendarian’s case.

Where to play Johnan Legendarian?

Johnan Legendarain has not yet been released, but it will be due to play at most new casinos from 29.03.2021

Johnan Legendarian is a decent game offering some great rewards, let down only by its Bonus functionality and less than super Super Bonus.

Any die hard ‘Book of’ fan will be happy to see a change of scenery from your typical Egyptian Theme, and the theme for Johnan Legendarian is great, with stunning visuals and seamless gameplay.

The pay outs for symbols in the Base Game are pretty good considering the game its modelled upon, but then again it would have to be to stand a chance at even competing with them. The Base Game is devoid of any features, but you can’t really blame it for that, as neither does any (or very few) of the ‘Book of’ style games.

It’s just a shame about the Bonus functionality. Resetting to 10 Spins will either be okay or horrible depending on how many spins you’ve already used at the point of re-trigger, and the absolute grind for the Super Bonus just seems totally not worth it, considering what you actually get.

Overall, for a studio so new you can’t help but commend them for a design thoroughly well done, but you can’t really give them credit for gameplay they didn’t really invent. There’s nothing particularly innovative here, but Book of Dead and Legacy of Dead fans alike may just love it.

It’s very capable in terms of what you can win with maximum wins of up to 5,000x, and the high volatility will resonate well with those who like their slots to be a little bit more dangerous than safe.

Could Peter & Sons be a studio to watch out for in the future?