Join Theseus on an epic Journey into the Labyrinth and defeat the legendary and mythical beast of Crete in Labyrinth of Knossos Multijump Slot from Yggdrasil.

Yggdrasil take us an adventure into the world of Greek Mythology with Labyrinth of Knossos Multijump Slot. Multijump is an exciting prospect from Yggdrasil, promising a multijump multiplier on any symbol on every spin.

Yggdrasil boast that their New Slot is high paced, laden with potential and attractive to a wide range of players.

It certainly seems exciting, but the question is, can you take on the Minotaur and emerge victorious?

Defeat the Beast of Crete

Labyrinth of Knossos Multijump Slot has an eerie and adventurous in a cartoon style illustration.

In the background you can see ruins symbolic that the Labyrinth is ancient, as well as statues and underground lakes. The music resonates well with the theme with its godly and mythological tone.

All together it comes across as an imaginative theme where legends and stories have come to life in slot form.

The betting options available in Labyrinth of Knossos Multijump Slot range from its lowest option at £/€0.20 to its highest option at £/€60. There are plenty of different options in between the two, so there is an option for all here.

Top Symbol is the woman, followed by the Minotaur, Shield and Sword. Low paying symbols are A, K, Q, J, 10 & 9, and there is a Wild symbol which substitutes for all except for the Scatter symbol.

Labyrinth of Knossos Multijump Slot is a 5-reel game that utilises 243 ways to win.

To connect a win, you’ll need at least 3 matching symbols to connect from left to right, starting from the left-most reel.

Symbol connections on their own may not be enough to roll in anything of significant value, but Labyrinth of Knossos has a trick up its sleeve, namely in the form of the Multijump Multiplier mechanic.

Individual symbols may have a multiplier attached to them, which could be x2. X3 or x5.

When connecting to another symbol of the same type, the multiplier will move to the next symbol.

If the next symbol also has a multiplier, then the first will be multiplied by the next one, continuing the chain all along the winning way.

This can result in some huge hits if you can get a big multiplier, and multipliers will even pass on to Wild symbols making connections even easier.

Wild Symbols always appear in a stack of 3 symbols. 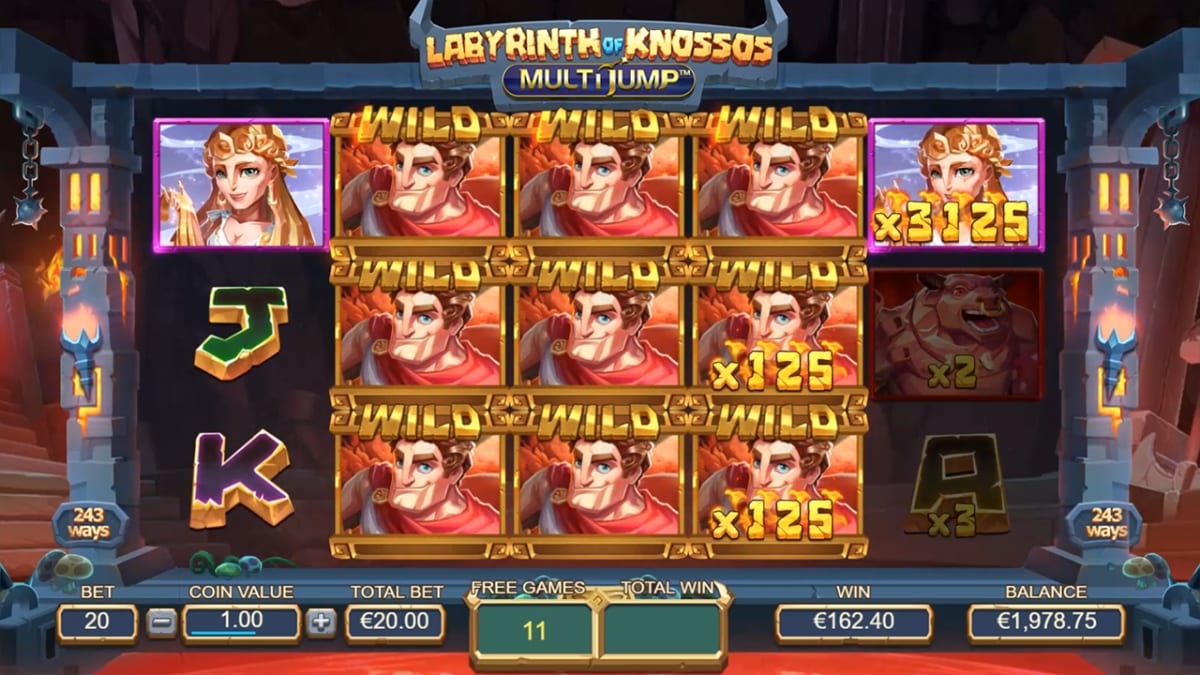 To get Free Spins in Labyrinth of Knossos Multijump Slot, you will need to land at least 3 Scatter Symbols.

Free Spins isn’t anything significantly different from the Base Game, but it does enough to make it an exciting prospect.

In Free Spins, each symbol except for Scatters is guaranteed to have a Multijump Multiplier attached to it. Because of this, you can be certain that any symbols that connect all the way across would have multiplied a few times for some potentially massive hits. 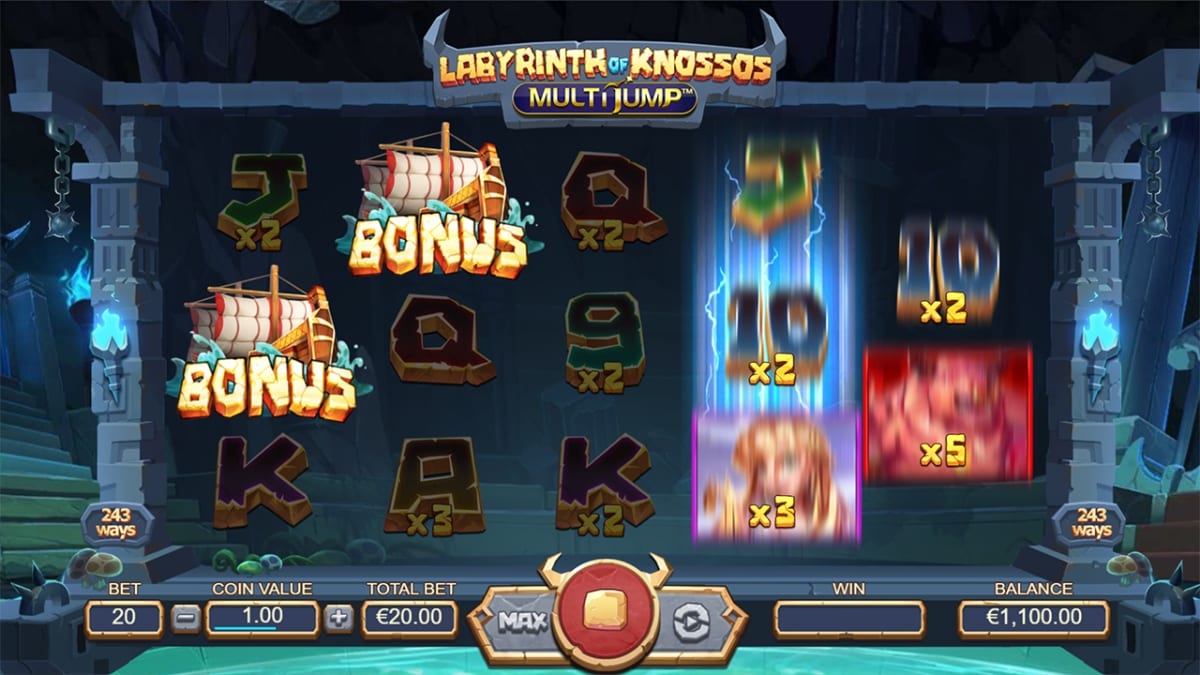 Labyrinth of Knossos Multijump Slot is a simple game with simple yet exciting features.

The possibility of a Multijump Multiplier within the Base Game makes it interesting enough, with some big hits possible even there. However, as is usually the case, the fun to be had lies within the Bonus round.

The prospect of the MultiJump Multipliers on every single paying symbol can get your heart racing, and it’s because of this that the game is capable of its attractive maximum win of 4,679x.

The game could use some different features. Maybe something that does something with the Minotaur, or plays around more with the Multijump feature, but for what it is, it’s not a half bad game.

It probably isn’t going to be your new favourite slot, but its charming mythological theme, features and solid gameplay will still impress.

Labyrinth of Knossos Slot is available to play from most New Casinos from now!