Welcome to East London in Megaways Mob from Storm Gaming!

Earning yourself an honest living comes with a certain sense of accomplishment, but robbing a bank certainly pays better. Megaways Mob sees you join 1960’s mobsters in a heist to remember with some classic Megaways action.

Storm Gaming have touched on the Megaways formula a couple of times before with games like Payday Megaways and Bar X Triple Play Megaways, so they’re certainly not new to the format.

Will Mob Megaways bring with it some innovation? or just a bog standard Megaways reskin? at first glance the statistics don’t look all that promising, with a woefully low RTP statistic of 94.40%.

Let’s at least give Mob Megaways the benefit of the doubt, and see what kind of action awaits us in the big smoke.

Megaways Mob has a decent and appealing visual aesthetic to it, with a cartoon portrayal of 1960’s London.

To the left of the reel you’ll see a classic British pub named the ‘Stagger Inn’, complete with a union jack that’s sure to evoke a sense of patriotism among the British readers.

To the right you’ll see the Police Station, which is definitely where we don’t want to end up at the end of our Bank-Robbing journey. The Cobbles and the true interpretation of a bygone London era really immerses you in the theme, unlike previous games like Payday Megaways and Bar-X Triple Pay which had poor graphics or just plain boring classic themes.

You can definitely see the improvements that Storm Gaming has made.

Betting options in Megaways Mob are rather extensive given that it’s a Megaways game.

Usually the ‘standard’ for most is betting options that range from £/€0.20 to £/€20, with a few exceptions here and there depending on provider.

In Megaways Mob, the lowest bet is £/€0.20 and the highest bet is £/€100, and with plenty of different options in between you certainly can’t complain about the options on offer here.

Megaways Mob: The Base Game and Features

Each of the 6 reels may hold up to 7 symbols, including the sliding reel that sits above reels 2-5.

To form a win, you’ll need to match at least 3 symbols (or 2 of the top symbol) on consecutive reels from left to right, starting from the left most reel.

Winning symbols will disappear from play, leaving space for new symbols to fall in via a cascade, or for the symbols on the sliding reel to move left, creating the possibility of more wins.

Megaways by now is widely recognised and most know how it works. Its immense popularity is partly down to the potential that they have within the Base Game, with tonnes of ways to win and the possibility of multiple wins on a single spin.

Megaways Mob is pretty much the purest version of a Megaways game, so there’s not really any innovative features here to speak of that differentiates it from any other classic Megaways title you’ve played.

Megaways Mob does however, have a ‘Pick Me’ bonus as an added extra.

The Pick Me bonus is triggered by landing 3 Bank Symbols, which then reveals 3 bank symbols.

Pick one of the symbols to reveal a multiplier, which awards you with a prize of your bet x the multiplier revealed.

The most sought after feature in the game will of course be the Free Spins Feature. 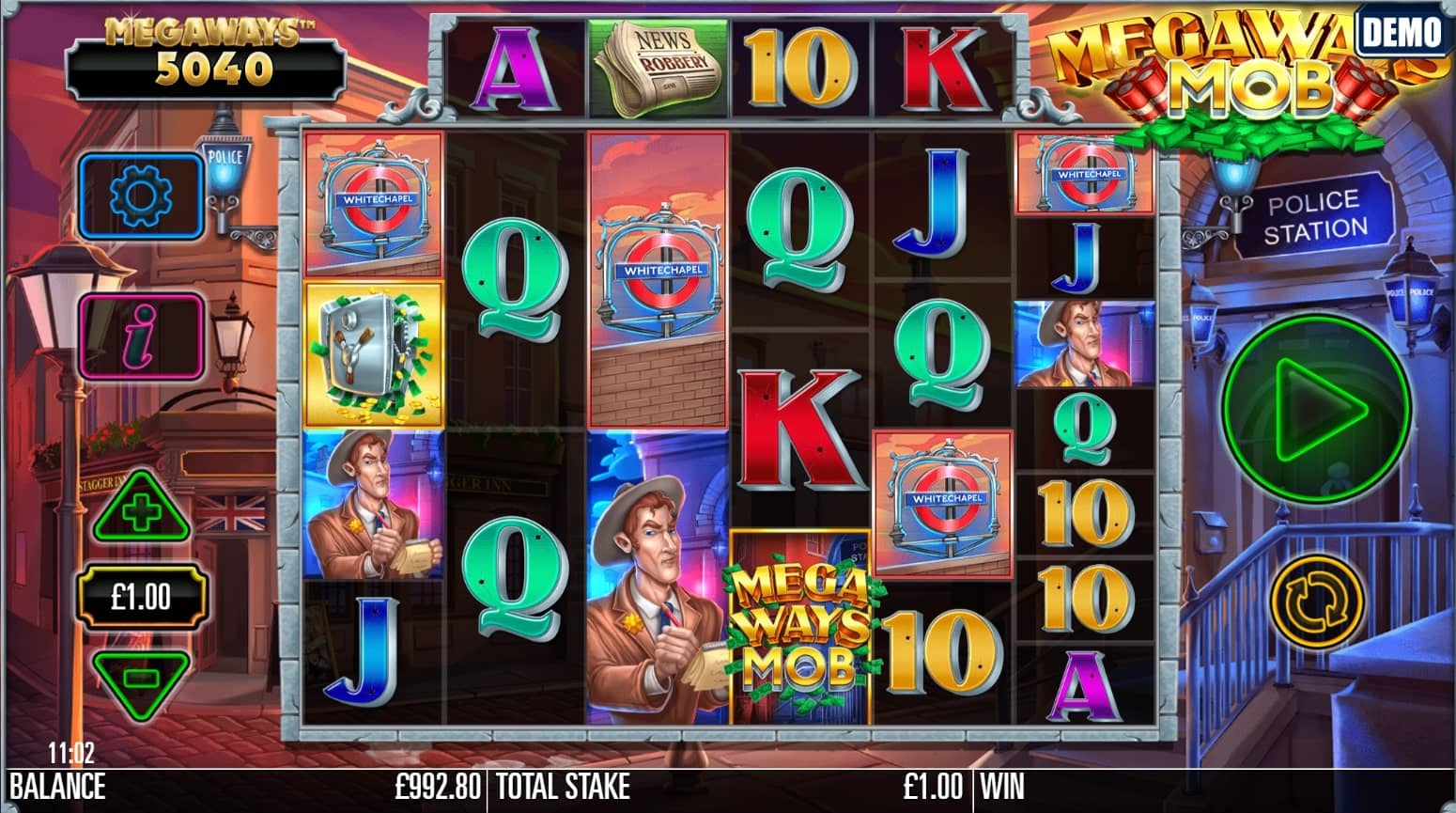 The Megaways Mob Free Spins is awarded when you get at least 4 scatters anywhere in view, which will award 12 Spins.

Every extra scatter after the 4th will give an extra 4 Spins. The game can be retriggered within the bonus itself by landing at least 3 Scatters on the sliding reel.

Your win multiplier will start at x1, and increase by +1 for every cascade after a win.

Big hits are possible once that multiplier gets to a nice level, and you make some decent connections with some good symbols! We’ve all seen this type of game before, so we know how good it can be, but also how bad it could be through lack of connections.

In a nice little addition, Megaways Mob include something a little less standard within the Bonus that can trigger at random, called the Dynamite Wins.

This can award a number of extra spins, or possibly remove all low paying symbols for that spin.

It’s a welcome addition to the bonus, it at least makes it slightly different to your standard Megaways bonus, but not by much 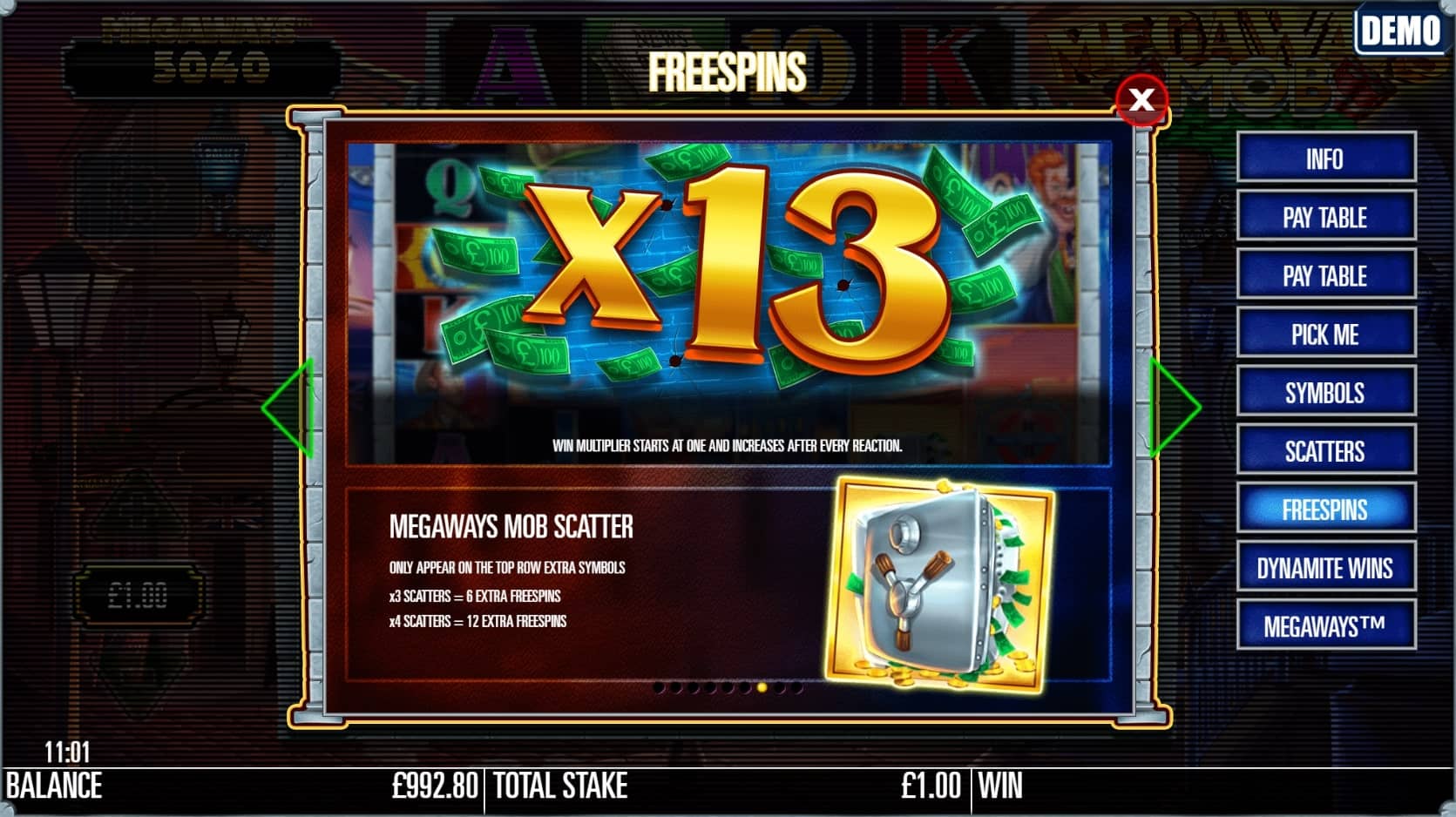 Megaways Mob has an enticing and amusing London theme and some decent potential, but not a lot can really be said about the gameplay itself.

It’s true that there’s a Pick Me Bonus, as well as the Dynamite Feature which adds a little excitement in to an otherwise standard game, but other than that it truly is a generic Megaways game to its core.

The RTP looks absolutely dismal, at 94.40%, which is much lower than a lot of other Megaways games out there, but the Maximum Win certainly looks attractive, with wins of up to 76,000x theoretically possible. Emphasis on the ‘Theoretically’, because in hindsight you’ll probably get nowhere near it.

For what it’s worth, Megaways Mob can perform really well if the stars align and the bobbies are too busy sleeping at their desk to take notice of your misdeeds. Cascading Symbols and up to 117,649 ways to win can be formulas for success after all. But the praise for that belongs more to Big Time Gaming for creating the formula than it does to Storm Gaming.

Overall, if you like your favourite version of a Megaways Slot is like this one, then there’s no reason why you won’t enjoy Megaways Mob, unless the RTP puts you off that is. If you’re on the other side of the fence where you’re desperate for some innovation in the Megaways Space, then Megaways Mob doesn’t really offer you any salvation in that respect.