Nobody is a stranger to the dramatic and phenomenal narratives of Ancient Rome that has manifested itself time and time again in the world of slots. Today we’re in 64 AD, and find ourselves immersed in history with this Neros Fortune Slot, a high volatility, 5X5 Grid slot from Quickspin. Inspired by the events of the Great Fire of Rome under the reign of Emperor Nero. Get ready for an intense experience, with stunning visuals and a suspenseful orchestral soundtrack as you fight for those big wins.

Rome Wasn’t Built in A Day

First impressions are important, and this slot makes a good one. Upon loading the game you’ll see it’s evident that Quickspin really put a lot of thought into making this one aesthetically pleasing. Embers float through the air, the sky is stained orange and the backdrop of some Roman architecture and the presence of Roman soldiers makes for a dramatic scene.

We’ve got a video slot developed to a very high standard and it shows. The user interface is the minimalistic and easy design that we all appreciate from the Scandinavian Developer, with ease of access to change the stake and an option for turbo spins.

Nero’s Fortune is a tumble, cluster pays slot, which adds to Quickspin’s catalogue of this kind of instalment, having previously brought us Golden Glyph and Wild Couldron. This high variance 5×5 grid slot will satisfy the itch of those looking for a high risk, high reward game and will maybe even appeal to the more casual consumer with the prospect of a progressive multiplier system and free spins.

The game features 10 symbols which consist of 4 low paying, and obviously, more frequently occurring symbols (J, Q, K & A), and 4 high paying or premium symbols, with the top symbol being a red ruby. The game will also throw occasionally throw in a wild which will substitute for all but the bonus scatter.

During the Base Game, Symbols will fall onto the reels below, and a win is achieved when 5 of more matching symbols form a cluster. Once a cluster is formed, the winning symbols will be removed and a cascade will ensue to fill the gaps, similar to that most commonly seen in megaways games. Due to the presence of cascading symbols, the prospect of multiple hits is prevalent.

The base game has huge potential due to the Burning Arrows feature. Once a win occurs. the winning symbols will be removed and a single arrow, or multiple, may (and usually does) shoot onto the screen spawning a multiplier ‘X’ in the space, or spaces left behind. A subsequent cascade will then cover these multipliers, which will be unlocked if the covering symbol disappears as part of a new cluster.

Additionally, to this, if more than one ‘X’ was uncovered then the multiplier will increase accordingly with how many were uncovered, giving you that much desired progressive multiplier. This will repeat until the spin concludes with no remaining winning clusters on screen.

This is where the potential starts to show. Due to the prospect of increasing your multiplier fairly quickly, the wins can start becoming fairly big, leaving you excited to even land the low paying symbols. As with any cluster pays, the presence of a huge cluster of symbols will make the wins bigger, and the presence of a multiplier if it happens will make it that much more formidable.

However, just because these wins can progressively multiply, doesn’t mean they will. This is a high volatility game after all and on many occasions, you may find yourself with a multiplier that dissipates when a cascade reveals no more winning combinations. But fear not, the fun doesn’t stop there, pick up your sword and shield like the mighty Roman warrior you are and press on, for the Flames of Nero free spins.

The Flames of Nero feature will trigger when 3 or more bonus scatters land on the reels.

2 of them land and the moment has arrived, the screen tilts back dramatically signifying the start of something special, but will the game tilt you as well as the screen? It lands, and 3, 4 and 5 scatters will get you 10, 12 and 14 spins respectively.

Multipliers are added randomly across the reels, waiting to be revealed as part of a cluster win, except unlike the base game, the multiplier will not reset between spins. Because the progressive multiplier does not reset, the potential is there for some MASSIVE hits. 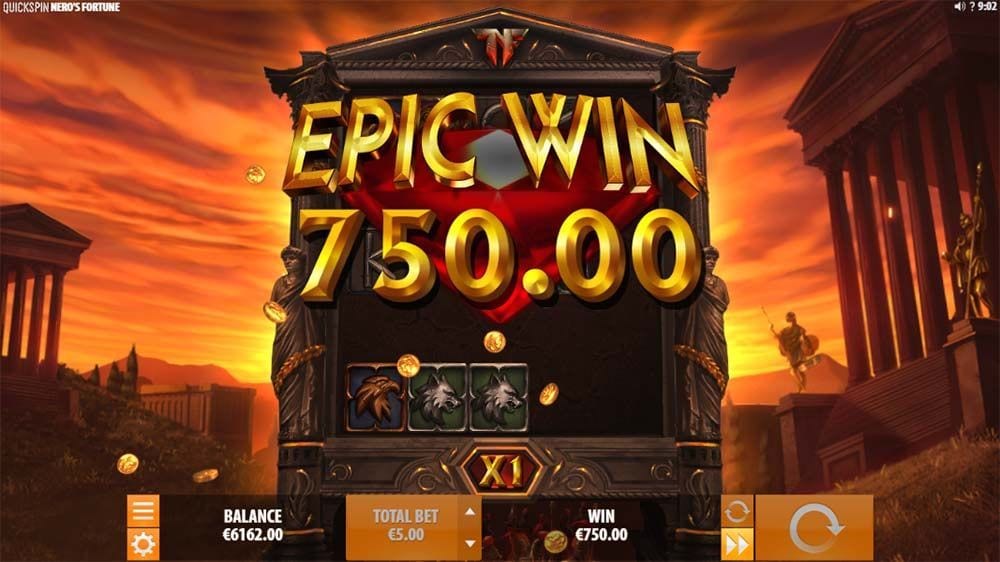 What a game quickspin have made here. A unique spin on a grid format game that is evidently growing ever more popular among providers and they’ve absolutely smashed the visuals.

It’s always nice when a Base Game has potential for some nice hits. There’s nothing worse than relying solely on the Bonus for that excitement, because fun is what it’s all about after all.

Someone more casual may find that they’re not up to the challenge, and maybe even say that the game is bad. But you and I know better; this is a high variance monster that might be more savage than emperor Nero himself on a bad day. But on a good day, you may just find through persistence and bravery, that you are worthy of Nero’s Fortune.