Relax Gaming are treating us with a sequel to the popular Temple Tumble Megaways with a brand-new instalment, Templar Tumble Slot!

Templar Knights are armed, and they’re ready for battle in this medieval themed Slot with exciting features that will make you want to join in the the fight.

Relax Gaming say that the medieval Cathedral is worth its weight in gold, which is a good sign for players who have geared up in Knight gear looking for exactly that.

The remnants of the older game are back with crumbling blockers that will take you one step closer to fortune, and up to 117,649 ways to win will make it even more thrilling.

Grab your sword if you fancy yourself as a Templar Knight and get battling!

Templar Tumble Slot has a great aesthetic to it with its medieval depiction of a cathedral, complete with statues of a Knight and a Griffin.

The Graphics are very lifelike, and you can tell that a lot of thought went into the design of the game, even the vines that shroud pillars of the Cathedral and the shadows cast by the statues look life like.

Top marks overall for visuals, and the sound deserves a mention too with the delicate theme, complete with a choir. The sounds of the game will pick up a little bit as you spin and things start to happen, creating a little element of suspense in the Slot.

Templar Tumble Slot has outdone Temple Tumble in ways that are almost unbelievable when it comes to the graphics. You wouldn’t even really think that they were by the same provider if you didn’t know any better.

With impressive visuals, sounds and a generally pleasing aesthetic overall, can the gameplay and its features impress too?

Betting options for Templar Tumble Slot are extensive enough that they should cover the needs for most, if not all, players. The lowest option that you can play from is £/€0.10, and the highest is £/€20. There is a lot of increments in between, so just pick your ideal option and head into battle!

The Top paying symbol in Templar Tumble Slot is the Knight, which is followed by the Ring, the Lion, the Griffin and the Tree.

Lower paying symbols are coloured gems, which are red, purple, green, and blue. There is a Wild Symbol which will substitute for all symbols.

The ways to win mechanic used means that the game will disregard the symbols exact position on the reel, meaning that they only need to connect via adjacent reels, which is easier than worrying about things like pay lines.

It seems like Relax Gaming have dropped the word ‘Megaways’ from the title of this particular game.

Temple Tumble had the Megaways Slots badge, but, it didn’t really need it. The number of ways that it had to win could technically have made it so, but the way it deviated in its winning ways made it entirely different.

New symbols will fall in to replace them, which makes even further winning combinations possible. ThisThis repeats until there are no more wins.

Templar Tumble have introduced something a little bit different in Templar Tumble Slot in the form of the Mystery Reveal Feature. 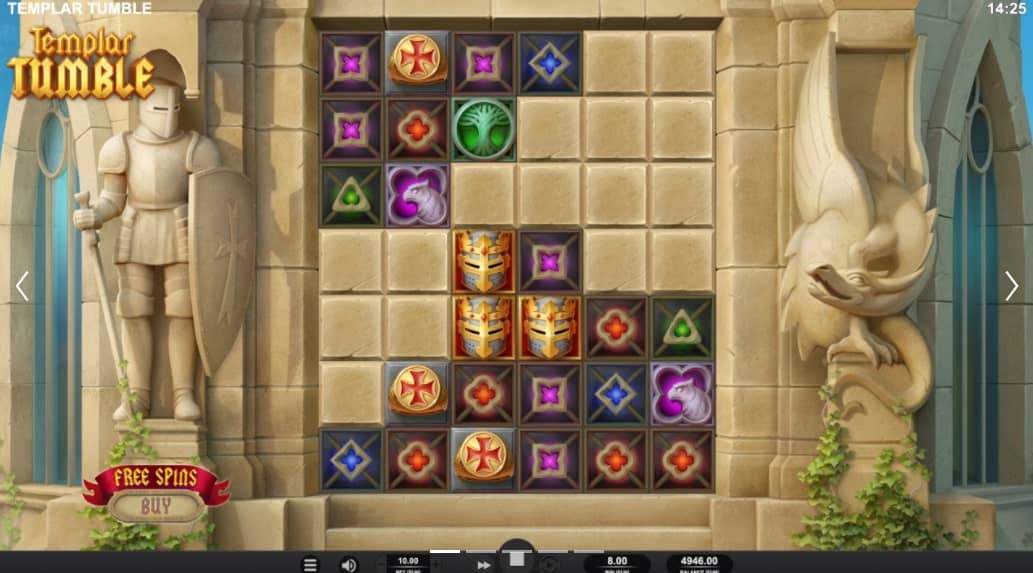 If a Wild falls into play, then a number of symbols will transform into Mystery Symbols.

These remain until no further wins are possible, and then turn into one of the same normal symbols.

There’s a possibility that these may also turn into coins, which will reveal a prize between 1x – 100x.

These may also award an extra spin in Free Spins

It seems as if Relax Gaming have gone a little bit Razor Shark on us with the implementation of coins. This is an exciting feature, and while it may not have a 2500x coin like Razor does, it still holds a lot of excitement with the prospect of possibly revealing a 1000x coin!

To get the Free Spins in Templar Tumble Slot, you’ll need to destroy all of the blocker symbols.

During the Free Spins, there are no blocker symbols present, so already there is a lot more potential in getting those connections.

Wilds once again serve an important purpose within the Free Spins, turning into mystery symbols once more, lying in wait until there are no more winning combinations before they reveal themselves.

Unfortunately, there is no progressive multiplier as wins occur within the Free Spins, but every spin is played with 117,649 ways, and there is the excitement of the Coins that possible turn into multipliers.

Templar Tumble Slot is a thrilling tale of medieval lore told through a Slot that can manifest in exciting gameplay.

Temple Tumble Megaways was a big success, and given the improvements made with Templar Tumble, it would be surprising if this wasn’t.

The Coin Feature is something that’s really exciting, with the possibility to hit 1000x on a single spin, and the bonus itself makes things even more thrilling with 117,649 ways every spin, with the same coins that can propel the potential to great heights.

The maximum win available on Templar Tumble is 17,371x, which would be incredible to say the least, but even if you don’t get all the way there, you can rest assured knowing that big things can happen in Templar Tumble Slot.

Templar Tumble Slot is an upcoming Relax Gaming Slot that will be available to play on most New Casinos from 24.03.2021