The Professional Darts Corporation and Blueprint come together as Darts meets Fishing Frenzy in a thriller for darts fans everywhere in World Darts Championship Slot.

Blueprint games are no stranger to branded variants of their games, with instalments before like The Goonies Slot, Sausage Party, Top Cat, Ted, Rick and Morty and many more.

This time we’re moving away from the world of media and into the world of sport, and all the Darts Champions themselves are here for the show.

Will the champion be PDC number 1 world ranked Gerwyn Price? Or will Michael Van Gerwen reclaim the top spot?

You can see the animations of the lights move around the reels, which have a simplistic design, keeping it simple and very much in line with what typical 5×3 Blueprint slot usually looks like.

The music is a nice touch, utilising the darts anthem, Chase the Sun. This will be highly recognisable to Darts fans, and just catchy to those who aren’t!

All of the pros are here in World Darts Championship slot.

Impressive range of professional players indeed. Is your favourite present?

Betting options in World Darts Championship Slot range from £/€0.10 at its lowest to £/€20 at its highest.

There are plenty of different options in between the two, so you can rest assured that there’s an ideal stake for you.

Blueprint seem to be good at adding nice incremental increases to their games as well, which gives players a lot of choice with what stake they prefer to play with, with no massive jumps between two points.

Top Symbols in the game are the aforementioned Darts Players. 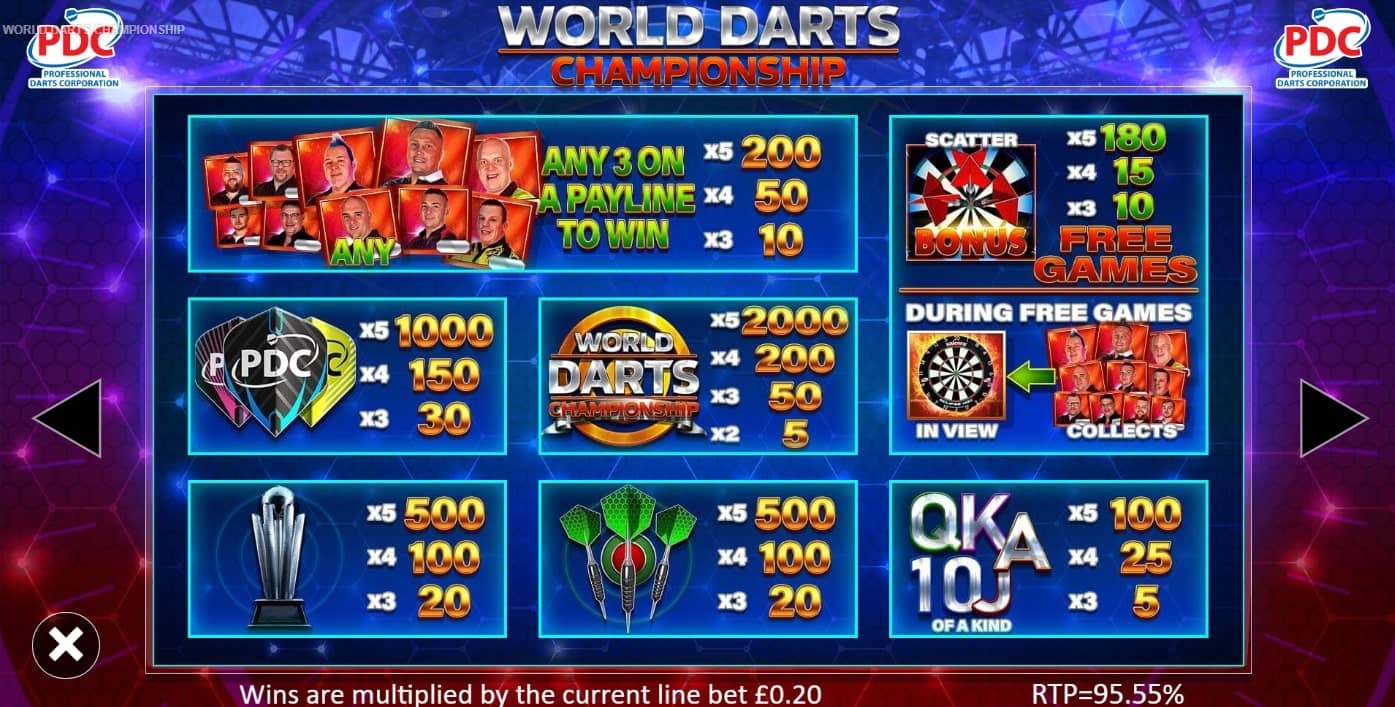 The Base Game for Worlds Darts Championship Slot can be a little uneventful to say the least, using a simple approach to gameplay with its 10-pay line function.

Any 3 matching symbols across any of the 10 pay lines will form a win, with decent wins available for connecting some of the higher paying symbols all the way across a line.

Darts players, regardless of who they are, act as one symbol, so 3 different players will connect on a line. The Dart Players have a value attached to them, much like fish would in the Fishing Frenzy series, but these values don’t yet mean anything until you actually progress into the bonus, of which there are two to choose from.

5 Scatters is certainly an exciting prospect. 180 Free Spins could have the potential to go absolutely huge!

Whichever of the two options you choose, you’ll have the same amount of spins, but with a fundamental difference.

The first bonus will be a more familiar site, where all types of players with different values may appear. You’ll need to collect a Dart Board in view to collect any of the prizes on screen

The second bonus is a little bit different.

In the second bonus, you get to spin a wheel which chooses one player only with a predetermined value to be the only symbol that appears for the duration of the Free Games. This is probably the riskier of the two, as you could end up with a low paying symbol only, but it appears more often.

Or you could end up with a higher paying symbol that appears less.

The choice is yours.

World Darts Championship Slot is a simple game, yet it’s got some very exciting aspects to it, with two different bonuses to choose from and the capability to win up to 10,000x!

The Base Game can be a little bit lacklustre, but the bonus doesn’t seem as if it’s too difficult to land, so you hopefully won’t need to wait long to experience the action.

World Darts Championship has medium/high volatility action, and the theme of the game will thrill die hard darts fans who get to see their favourite players manifested in a Slot format.

One negative, apart from the Base Game being a tad dull, is that the RTP sits just below the sort of average at 95.55%

World Darts Championship is available now across most New Casinos