The Goonies Slot is a new slot from Blueprint which revisits the same design as Ted with some interesting twists. The Goonies Slot is based on the Steven Spielberg film from 1985 featuring 4 children on a adventure to get One-Eyed Willy’s Treasure.

This has the familiar Blueprint feel of features with some new twists. As normal you can get random features or a bonus feature.

Let’s start with the random feature called One-Eyed Willy’s Riches which is randomly activated by the skull above the play button turning green.

However just like a typical Blueprint this can trick you and not activate either. Once activated you are presented with 3 Keys and it the key you choose may have the following feature: 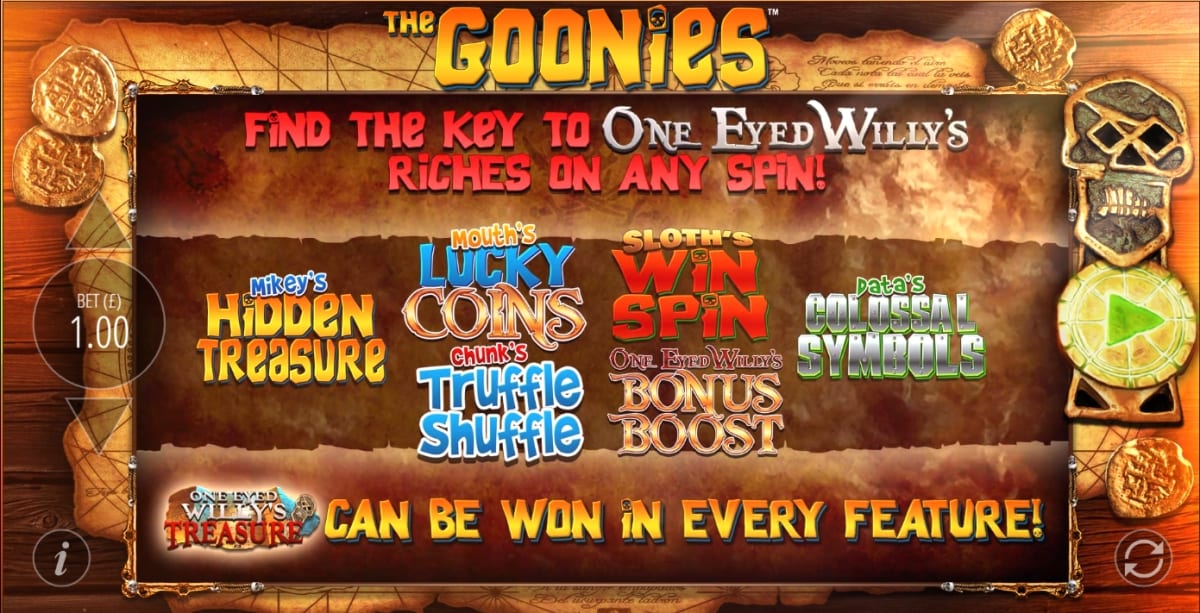 There are also two additional random modifiers which can trigger on any spin which will turn a loosing spin into a winning one. A scythe can appear which will reset the reels into a win and a cave will collapse to reveal a win also.

The normal bonus is triggered by 3 or more bonus symbols which will take you a wheel to spin which bonus will be chosen for you, these are:

Like all these types of Blueprints the feature can be gambled until either Mystery Win is hit or the top feature is awarded. A little change to this is that on some occasions the gamble will turn into super gamble when spun, guaranteeing a win. Be warned the odds of winning are not always as shown on screen (i.e. not 50/50). 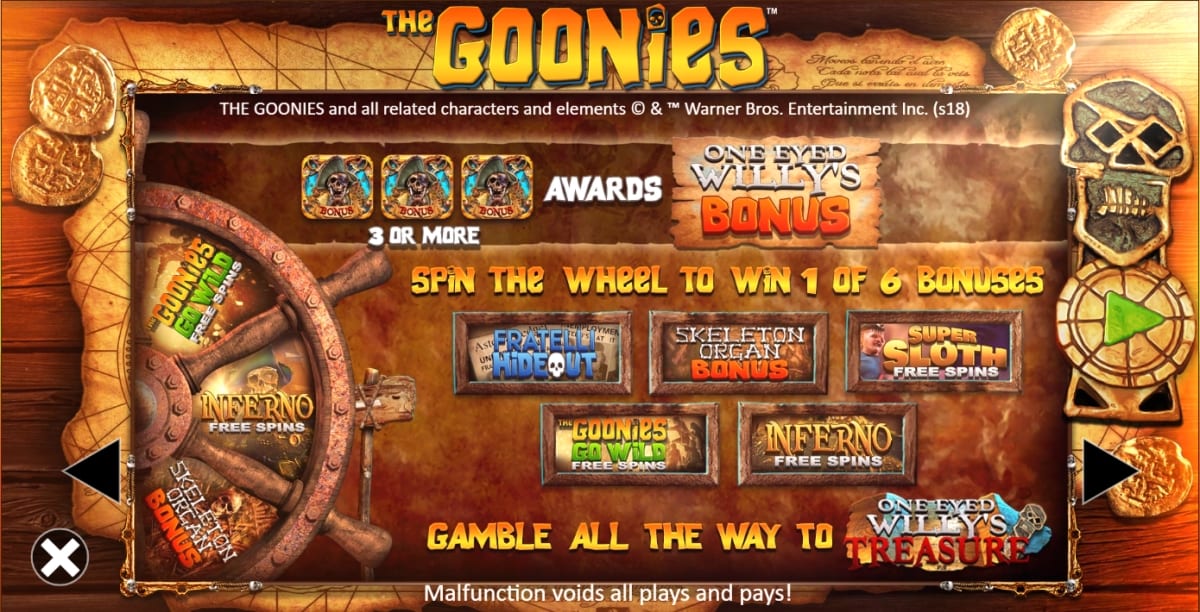 The bonus has a lot of potential at all levels, however you will notice that the lower levels are harder to hit that potential than the top level. Its based very much like similar other slots  like Ted, Paws of Fury, King Kong Cash etc.

The biggest wins are in the One-Eyed Willy’s Treasure which can easily give wins of 100x – 500x on it. However, there is great potential in most of the features too. With so many bonuses available in this game it can be hard to say where the best one is.

The game feels like a Mid-High volatility slot with the potential to easily get 100x to 500x but also with the right setup up to 1000x. There are a lot of teases and lots of things can happen at any time however, I feel like this slot like another new Blueprint are harder to bonus and harder to get the higher features.

Whether this is true or not will be seen after a while but is our first impression of the game.

This is a Blueprint slot at its best, there is so much to like about it and this is the best of its kind since Ted came out. The teases however are full on in this game, more so than normal or seems so. This will delight a fan of the Film and Blueprint slots and will be the hate of anyone who does not like Blueprints.

Graphics and Sounds are spot on and stick to the theme amazingly well. The range of features are well balanced and interesting especially with the new twists of the end trigger bit. This is everything you want a slot to be for it to be entertaining. It was hard not to keep playing it!

I expect this slot to divide opinion but as we like Blueprints it’s going to be a thumbs up here and expect to see a lot of it on stream!!!