Blood Lust Slot by Elk Studios has us diving into an alluring and mystical world of Vampirism. None of us are strangers to the Vampire fandom that has swept the globe in various different forms of media.

We’ve even seen it a few times manifested in slot form; from Immortal Romance by Microgaming to Bloodsuckers by NetEnt, we’ve certainly seen our share of Vamps.

The question is, will our lust for this game be akin to that of a Vampires lust for blood?

Creatures of The Night

As you’d expect from this kind of game, Elk Studios have gone for a rather gothic theme, and they’ve done it well. The landscape in the background is dark, ominous and haunting.

With a Castle that looks like Dracula’s Bran Castle sitting prominently in the background, the game has definitely set the tone.

Dramatic and a sort of classical music soundtrack plays continuously when you load the game, and the composition of this only further accentuates the enticing concept Elk Studios were going for.

Blood Lust slot works on 99 active pay lines, and bets are a minimum of 0.20, and a maximum of 100.00. Elk Studios also employs a strange Betting Strategies mechanic, which can be set so that stake deviates during the game.

Keep an eye out that you don’t accidentally have this selected if you only want to play with one stake.  Betting can be displayed as coins for those who prefer in the settings.

The Base Game of Blood Lust Slot

Blood Lust is a relatively simple game with a couple of different features. The game will work on 99 pay lines and pays from left to right.

9 symbols make up the total. 4 are represented by good looking, but typically pale Vampires, with Dracula as a top symbol. Heart, Spade, Diamond and Club make up the low paying symbols.

Low paying symbols are worth the same amount in this game, and there is a Wild that will substitute for all but Scatter and Re-spin symbols. 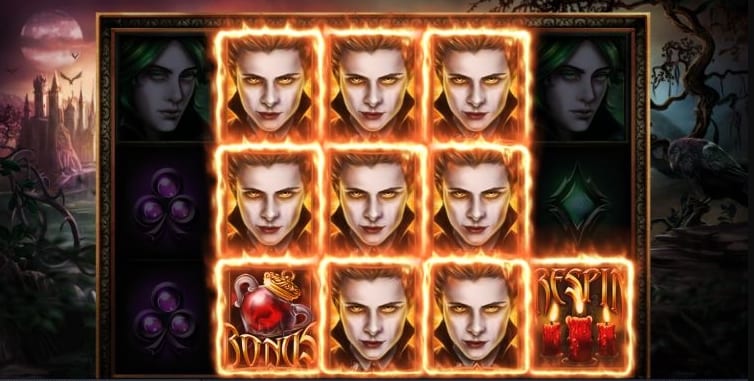 In Essence, boosted stacks are mystery symbols. In this feature, all the reels will have stacks of identical symbols and will be chosen randomly at the beginning of every spin.

However different symbols may have different stacks which can cause those hits to miss. This is an interesting feature to be included and can definitely set you up for nice wins if you manage to land a full screen.

If a Re-Spin symbol lands on the fifth reel you’ll be awarded a Re-spin. A random symbol in view will be selected and all instances of the selected symbol will stick, the reels will then spin again giving you a chance for bigger hits.

During this mode, any scatter symbols that were in view when the Re-spin started will also stick, making this a useful feature to get you into the bonus rounds. The feature can also activate again after it has Re-spun.

3 or more scatter symbols will start the bonus game. Rather than a set amount of spins, the game uses an odd mechanic which truth be told, can be quite annoying.

When 3 or more symbols land, a border will surround all bonus scatter symbols in view, each of the scatters represents 1 spin. and every other space within the border will give you another. For maximum potential, you’ll want the 1st scatter to cover the top leftmost reel and the 3rd on the bottom right.

This will award you the maximum of 15 spins. Not a huge fan of this considering that there is a potential to receive a mere 3 spins in the bonus because of this. 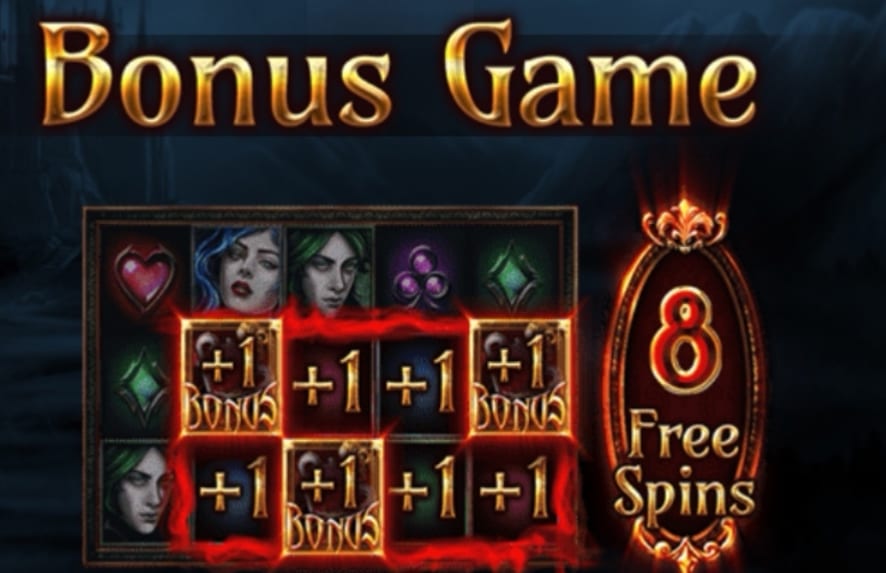 During the free spins you’ll see 3 of the top symbols at the top of the reel accompanied by a meter below them. When the corresponding symbol lands in view on the board, the symbols will be counted and their respective meters filled.

Once the meter fills completely the symbol will then transform into Dracula, who is the top symbol and an extra spin will be awarded. 3 or more symbols will retrigger the game.

Our Verdict of Blood Lust Slot

Blood Lust has done well in conveying the theme and design of a Vampire inspired Game. However, in terms of gameplay its nothing that special.

There’s certainly some potential here, but it’s quite small. The maximum win is a little bit low for a game with such high variance.

The Base game can get a little bit boring, and the boosted stacks feature will often fall flat leaving you disappointed.

We found the free games notoriously hard to obtain, and a standard set amount of spins would have been preferable to the border feature they use to determine how many you get.

The bonus definitely has the potential to kick off, and it’s fun, but will leave you frustrated if the game fails to transform your symbols into Dracula.

Vampires may not get old, but the game did rather quickly. Those who revel in myth and Vampire legend may enjoy it for a while, but it won’t be something that you’ll return to time and time again.

The game isn’t a terrible one by any means, but it’s definitely not one of the most exciting ones we’ve played.