Centurion has had a few instalments, all of which have been successful, including Centurion Maximus Winnus, Centurion Pottimus Maximus and Centurion Reelus Maximus.

Now we finally get to see this highly coveted title paired with one of the most popular gaming mechanics out there today, which is none other than the Big Time Gaming Megaways mechanic.

Centurion Megaways promises all the fun you’ve seen from the rest of the series, with feature-rich base game and bonus features, all with up to 117,649 ways to win. We can’t wait to see what kind of surprises Centurion and his massive chin have in store for us.

All Roads Lead to Rome

Centurion Megaways utilizes that familiar theme we all know and love from other instalments. The sun is shining, and life is good in Rome. The reels are themed upon Roman pillars and stone, and as ever, our creepy but ever so lovable Centurion is hiding in the bush peeping out at you.

The game doesn’t have any music or special sound effects to speak of in the base game, other than that all too familiar sound of the horn that plays with every spin.

Centurion Megaways has 6 reels, and 3 or more matching symbols will form a win starting from the left-most reel. Each reel is capable of holding between 2-7 symbols, and all of these together will determine how many ways to win there are.

Ways to win varies every spin depending on how many of these symbols show up on each reel, and can reach that staggering 117,649 ways that we all know and love from Megaways slot games.

Centurion Megaways also sees the return of symbols used in previous games, so you may well be familiar with these already.

For those who aren’t, the top symbol is the Centurion symbol, followed by a Horse and Chariot, Colosseum, Swords, Roman Helmet, Roman Coin, and your low paying A, K, Q, J. Wilds also exist, which substitutes for all symbols except Scatter.

Betting options are pretty much in line for what we’d expect from a Megaways game, with the lowest option being 0.20 with the highest bet available set to 20. Different options between this minimum and maximum also exist, catering for all kinds of players. 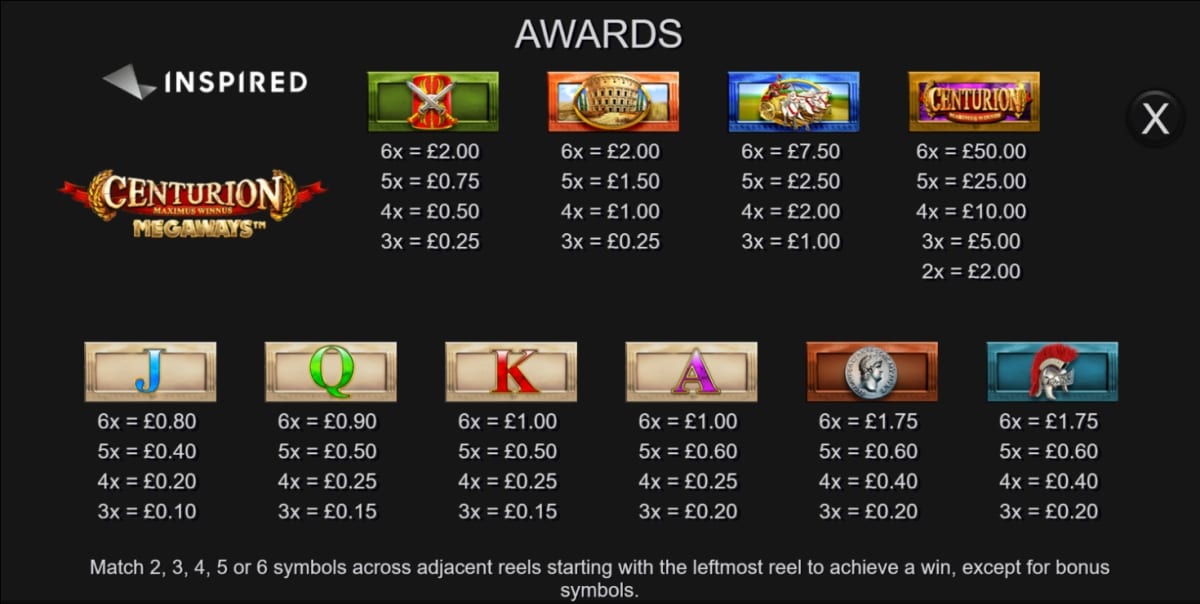 Centurion Megaways features cascading reels, so when a win occurs the winning symbols will disappear from the play area, allowing for new symbols to fill their space via a cascade. Cascading reels will drop a symbol the same size as other symbols already on the reel, so Megaways will not fluctuate from win to cascade.

Centurion Megaways is jam packed full of base game features, or ‘Reel Modifiers’. At random during any base game spin, The Centurion can appear from out of his bush and deliver a modifier.

These Modifiers are as follows…

Additional bonus symbols are added to the reels, Increasing the chance of landing a bonus.

A win of at least 20x your bet is guaranteed.

The Centurion will appear and announce the minimum number of ways for the next spin.

The Centurion will appear and announce that the next spin will use the maximum number of 117,649 ways of winning.

Mystery Symbols will be added to the reels, and all will change into any symbol except Wild and Scatter.

What a treat to be included in the base game. The game is so rich with features, all of which bring their own spin to how the base game plays. There’s nothing better than a game with base game features.

The Centurion is a little shy sometimes however, he can pop out from his hiding place before concealing himself once more, giving you nothing.

Another little noteworthy feature is the Spin Chance. This is triggered automatically if the credit is reduced below the current price of play, but is greater than zero. This gives the player the opportunity to wager the remaining credit in an attempt at winning an additional spin at the current bet.

If it stops in the green segment, a spin at the current bet is awarded, if it lands red, then tough luck my friends, maybe next time.

There’s tonnes going on in the base game, but hold on to your Caligaes. It’s about to get real in the bonus.

Yep, Rounds, plural. There are multiple kinds of bonus up for grabs in Centurian Megaways. 3 or more Bonus Symbols are needed to get yourself into the bonus rounds. Landing more than 3 will exclude some of the lower level bonus features, giving you a chance at landing a better.

The player presses stop to accumulate cash prizes across shields. Prizes are cumulative and multiplied by the total bet. Landing an arrow advances the player to the next shield. This feature will end when the player stops on collect. 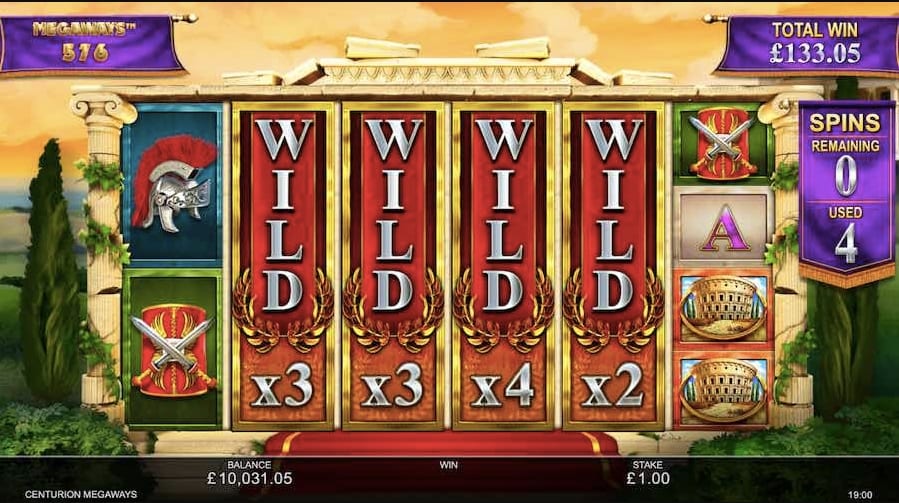 The player will spin a wheel which will select the number of spins and a starting multiplier.

Each winning cascade will increase the unlimited multiplier by one, and the round will end when spins run out. 3 scatters landing in view during both bonus rounds will award 5 additional spins, and 4 will award 10 additional spins.

All wild reels that are added will lock in for the remainder of the feature, and the wilds delivered can be multiplier reels. All wins will be multiplied by the value shown on the wild symbol, and are available in the forms of x3, x4, x5 and x6.

During this feature, cascades and the extra reel at the top of reels 2, 3, 4 and 5 are disabled.

Bonus gamble will allow you to gamble your bonus in pursuit of the next highest one. Of course, because it’s a gamble, you could end up landing the Mystery Win instead.

Mystery Win…two words that leave a bad taste in your mouth. We’ve all felt the pain from various other games with the same feature. Still, it’s not as bad as losing the bonus completely and walking away empty-handed.

Centurion Megaways has everything you want from a Megaways game and more. From simple cascading reels in the base game to an expansive number of features delivered by our man Centurion.

The game is absolutely jam-packed full of features, and it doesn’t just stop there in the base game, the bonus has loads going on as well with loads of different levels of bonus. Its great fun to try them all or gamble for the next highest one.

The number of different bonus games also keeps the game fresh and new every time you play it, giving you a new experience when you land that bonus you haven’t had before.

The game has high volatility action for those looking for that big hit, and with a potential maximum of 12,000x it’s worth a punt as much as any game out there.

Overall, the revival of this series with that prestigious Megaways badge is a welcome and will immortalise it more than it already was. It’s light hearted fun, and is one of the easier Megaways game to relax with, just hop in the chariot and lead The Centurion to do the driving.