You’d be forgiven if you loaded up the game and immediately chalked Cygnus Slot up as an Egyptian themed slot, but it’s a little deeper than that.

The Northern Cross constellation, also known as Cygnus, is a pattern of stars said to have a cosmic connection with the pyramids of Giza due to its exact alignment with the Egyptian wonders…

So Elk Studios are calling this one a Galactic themed game.

Elk Studios are the rising stars who bring us this title, and the brains behind some of the Gold Series games, such as Voodoo Gold and Black River Gold.

They’ve released some quality titles and we’re always excited for the next…and we’re certainly intrigued to see what a Galactic/Egyptian slot has to offer.

Elk Studios have done a nice job in combining the two different themes for a pleasant visual aesthetic here. In the Background, you’ll see a prominent Pyramid, and behind that in the night sky, Cygnus the swan.

Two pillars enclose the reels, and share an Egyptian and Cosmic theme. Music in this game is in line with what you’d expect from anything Egyptian related, nothing too noteworthy in terms of audio.

At first glance, you may actually expect this to be a cluster pays game, but it actually works on ways to win. Wins are paid from left to right and 3 or more matching symbols on consecutive reels will form a win.

Betting for Cygnus starts at a low of 0.20 and goes as high as 100 for those high rollers. Elk Studios have once again integrated their Betting Strategies mechanic into the game which is as follows.

Be wary that you don’t accidentally have this selected if you only want to play with one stake. 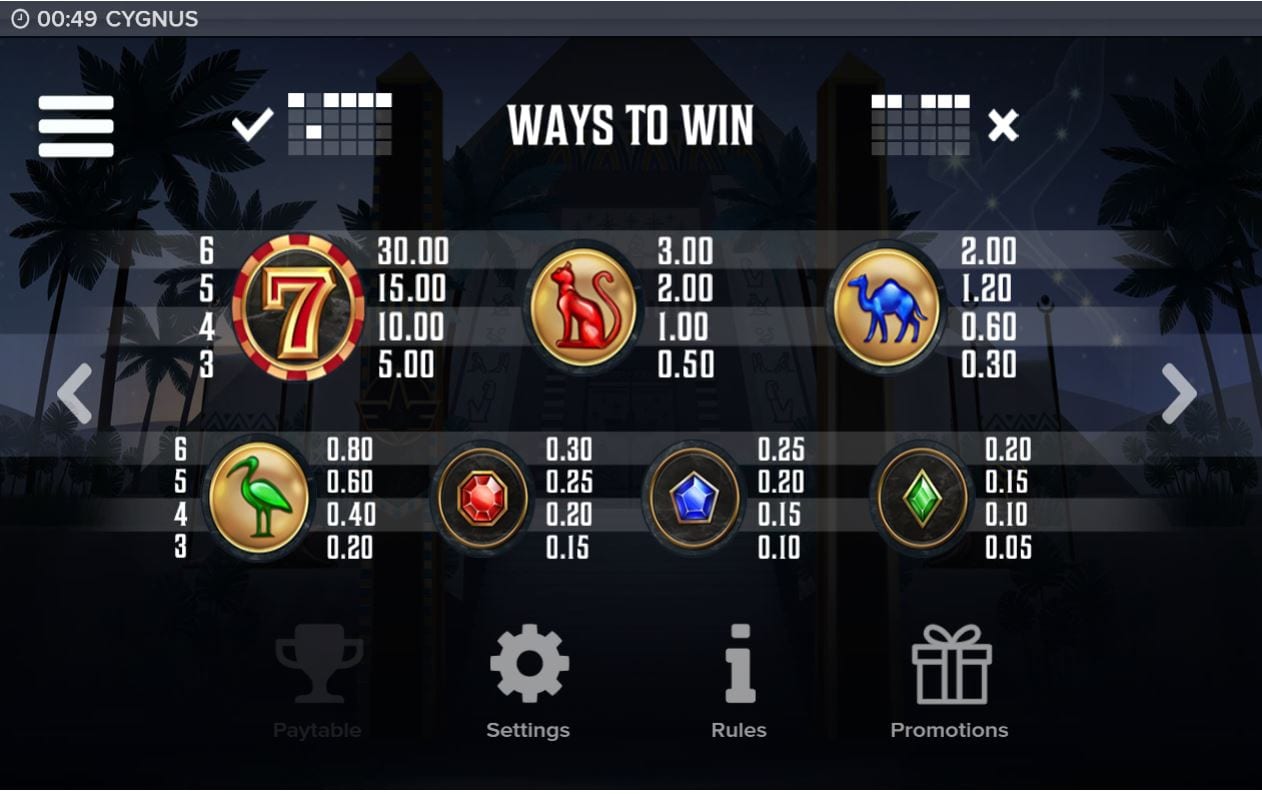 The Base Game Of Cygnus Slot

The base game in Cygnus is relatively straightforward, Reels pay from left to right and you’ll start every spin with a standard 4,096 ways to win.

The game features 4 high paying symbols, with the top symbol being a number 7 marble, as well as 3 low paying symbols. Wild is also present and substitutes for all but the scatter symbol.

When 3 or more symbols are cleared from the board, they will disappear to make room for new symbols to take their place via an Avalanche feature.

All symbols part of a win will explode and disappear, and new symbols will fall in via an avalanche and will continue as long as new winning combinations are made as a result.

What’s interesting about Cygnus is that additional rows will be added with every Avalanche. 1 extra row is added per avalanche, which heightens the potential for more hits and will reach a maximum of 8 rows for massive 262,144 ways to win.

If no winning combinations are made, then the reels will automatically default next spin to 4,096 possible ways.

You’ll notice when playing Cygnus that the reels slightly vary in height, because of this, symbols will fall naturally after an avalanche, rather than straight down like you might see in a Megaways game. Symbols naturally gravitate to the left, but won’t always.

The game may also spawn multipliers which will need to slot into place at the bottom of the reels in order to become active.

If you’re lucky, the spin may start with one or more multipliers in place, but if not, you’ll need wins to clear the way for the multiplier so it may reach the bottom. You can see your multiplier on the right-hand pillar, with the potential to reach a staggering 64x.

If no winning combinations are made then the multiplier will disappear and you’ll start the next spin at 1x.

While the right-hand pillar in Cygnus symbolises a multiplier indicator, the left one serves a much different purpose.

In order to land yourself 7 free spins in this game, you’ll need the scatter symbol to land and make its way via avalanche to the leftmost column, at which point the free spins will be triggered.

If instead, the scatter symbol reaches a position where it is theoretically impossible for it to reach the left column, it will explode and will be replaced by a new symbol in the next avalanche, giving it another chance to reach the pillar.

During the bonus you’ll start every spin with 8 symbols on every reel, meaning there are 262,144 ways to win.

Multipliers are also sticky during free games and will persist for the duration of the bonus.  To re-trigger the bonus you will need the scatter symbol to reach the left pillar. 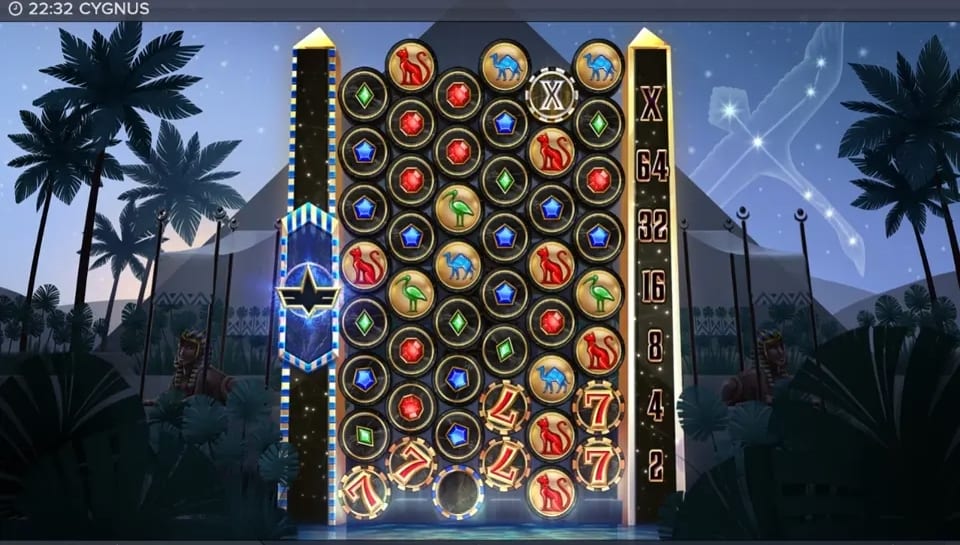 Our Verdict of Cygnus slot game

Cygnus certainly has a lot going for it, and it’s a game that Elk Studios should be proud of. It’s an innovative and fun concept, and we love the avalanche and gravity mechanics at play.

It’s a high variance game…so huge wins may be few and far between, and the bonus was quite hard to obtain, but the potential is astounding.

It’s hard to fathom the 262,144 ways to win, and the addition of multipliers up to a whopping 64x is enough to get your heart racing.

The praise isn’t reserved only for the bonus though, the base game was great fun to play and has huge potential on its own. Multipliers may not stick, and ways to win may start off smaller, but if you’re really lucky you can land some really nice hits.

Overall, not much wrong can be said about this game. The high variance may put some off; it can certainly drain the balance on a bad day, but for a game with this much potential, a huge payout could be a mere one spin away. Find a fast payout casino to enjoy this slot now!