Brush off the Roman Sandals and get ready for some marching…and lots of it. Relax Gaming are capitalising on the infinitely popular fandom surrounding Ancient Rome with their newest game Marching Legions Slot.

Relax Gaming have been consistently releasing titles lately, and you’ll remember them well if you played games like Snake Arena, Mega Masks or Temple Tumble Megaways.

Legionaries on the March

Marching Legions is a 5-reel 3- row video slot. The design is a classic cartoon aesthetic seen before in their own release Snake Arena, with typical pristine looking Roman architecture serving as the background, and foreground to the visual design.

The music is typical from what you might expect with anything related to Romans, dramatic music with horns indicative of a battle, followed by silence, except for an eerie quietness of the sound of the wind.

Just like Snake Arena, Relax Gaming have done a good job in making that effective first impression that’ll make you want to stick around and check this game out.

The game works on 243 ways to win, meaning that you need not worry about pay lines and is playable from 0.10 up to a big 100 per spin.

There aren’t a lot of symbols in this game, with 7 in total. Top symbol is the Roman Legionaries, with various other Roman inspired symbols below it making up the rest. No Wild Symbol is present in Marching Legions.

The option to buy yourself into the bonus is available with Marching Legions, but the price is a rather large one compared to previous games at 120x your stake. Again, this option is only available to players outside the UK. 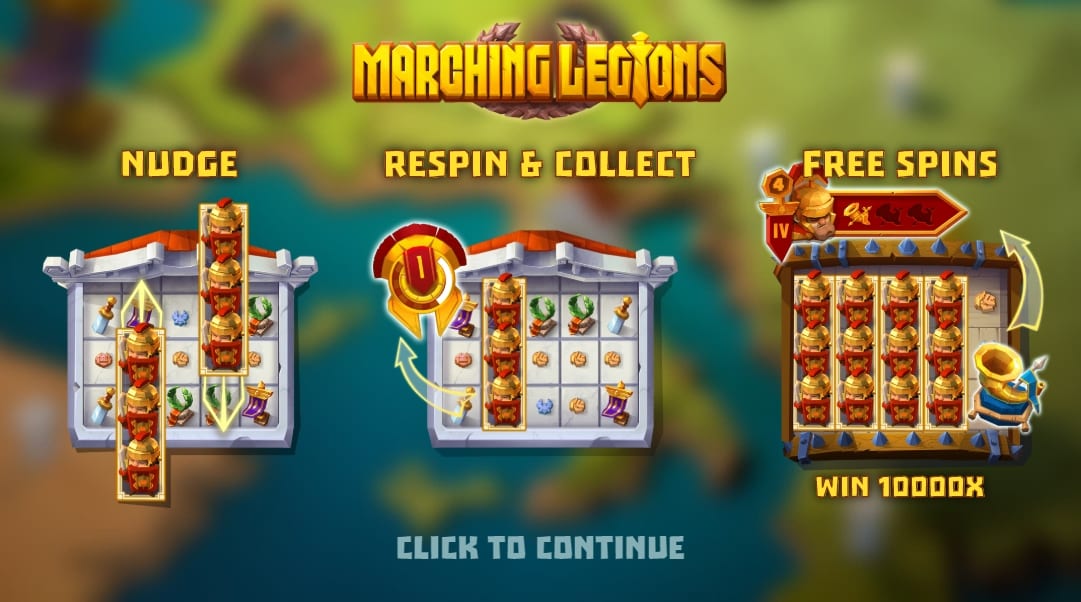 The base game is simple in the way that you’ll need 3 or more matching symbols (2 for top symbol) consecutively starting from the left most reel to form a win. Marching legions does however, have some other interesting mechanics at play here.

The top symbol legionaries may present themselves within a gold border and as a stack of 3 high. Should all 3 land within view, then a Marching Re-Spin will ensue.

The legionary stacks will march one step to the left between each re-spin, until they march outside the game area, and any additional stack of legionaries that land on the reel will also start marching.

With only 7 symbols in game the legionary symbol or stack can land quite frequently, the aim of the Marching re-spins is to connect this top symbol as much as possible with single legionaries or other stacks for big wins.

Complimentary to the Marching Re-Spins, the nudge feature may activate when 2 or more partial legionary stacks land within view. This will nudge these stacks up or down so that they are fully in view at which point they’ll start a Marching Re-Spin.

The key word with this one is ‘may’, they are not guaranteed to nudge and the nudge feature will not happen if a full stack of legionaries is already in view.

With the absence of a scatter symbol in Marching Legions, the free spins must be triggered by collecting stacks of legionary symbols via the Marching Re-spin.

Every time a stack of legionaries march outside reels, you will collect one step on the bonus meter. To trigger free spins, you’ll need to progress from level 1 up to level 5, and your current level and progress towards the next level is displayed at the top middle represented by a Roman Helmet.

When Free Spins are obtained, you’ll start at wave 1. On wave 1 you’ll start with one stack of legionary symbols on the right-most reel who will start marching between spins to the left.

To move to the next wave, you’ll need to collect 3 of the horn symbols before the legionary stack disappears from view. Horn symbols will appear on reel 5, and wave 1 starts with one horn already obtained.

Each wave will award one additional stack of legionary symbols which will once again start on the right-most reel and march towards the left until they disappear.

The potential for the bonus can be massive, any wave after the fifth will mean you’ll start with a full screen of legionary stacks, which would definitely result in some massive wins. 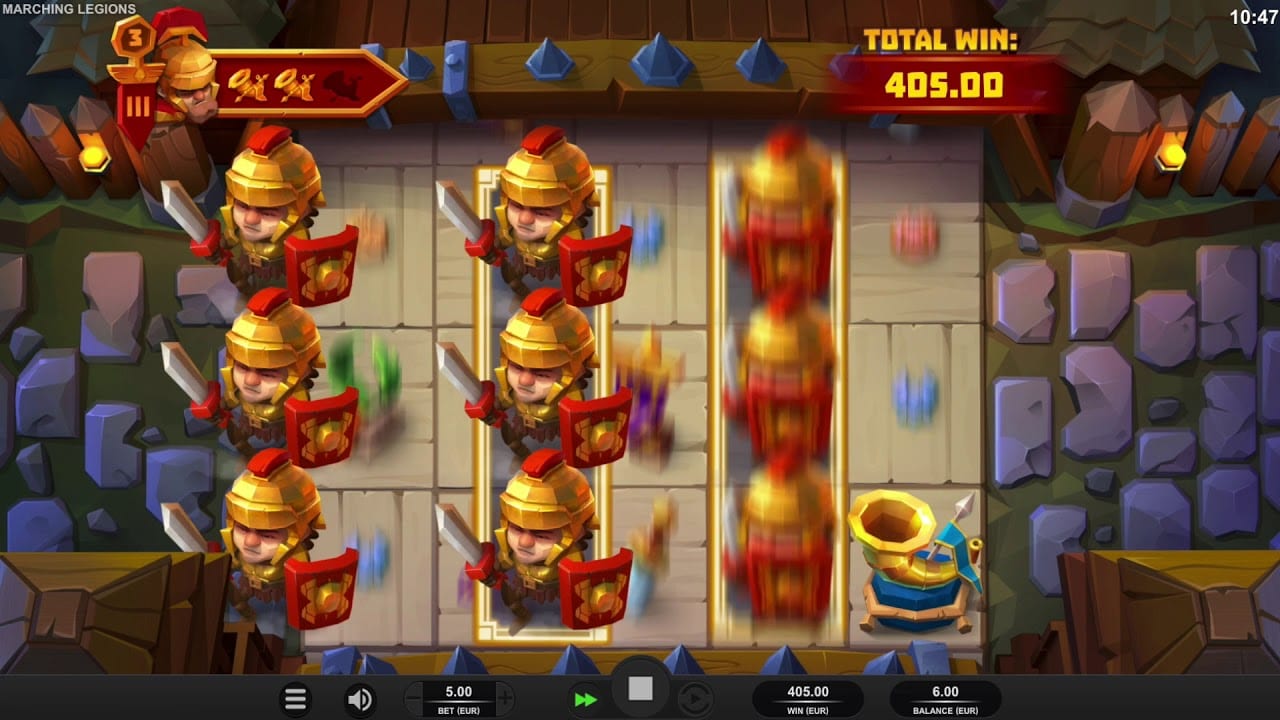 There’s so much to consider with this game, the bonus can feel like an absolute grind to get to due to the absence of scatter symbols, and makes you wonder what kind of balance you’ll need to persist all the way.

That being said, the lack in the number of symbols overall in this game seems to result in frequently landing top symbols and Marching Re-spins which might account for the impressive 98.12% RTP as a long-term average, and why the RTP reduces to 97.13% when the bonus buy feature is activated.

The Marching Re-Spins and Nudge feature make for a great base game mechanic and can see you landing some nice wins even without a bonus, and the bonus itself has absolutely massive potential under the right conditions, when/if you get there.

If you get to wave 5 you’ll be getting absolutely huge hits, but if it falls flat you’ll be absolutely inconsolable due to the amount of time it actually takes to get the bonus.

Overall, Marching Legions is an interesting and impressive game from Relax Gaming, promising high variance action for those patiently playing the long game, and could even become a favourite of those lucky enough to get a nice win using the Marching Re-Spin and Nudge Feature.