Tickets please, we’re heading to the Wild West and getting back on the Money Train.

If you thought the first Money Train was an exhilarating thrill ride, then you’ll definitely want to buckle up your boots for this one. Money Train 2 Slot promises more of the same Wild West action that we loved from the first instalment, with tenfold the excitement and absolutely massive potential.

Relax Gaming are the cowboys and cowgirls behind the newest addition to the Money Train family, and they certainly know how to captivate an audience with their fun and imaginative instalments.

We’ve been on the battlefield with Snake Arena, explored the Aztec ruins with Temple Tumble Megaways, and we’ve marched with Romans in Marching Legions.

With all these great releases, it’s hard not to get excited for another one from Relax Gaming, especially so for a sequel to the explosive western escapade that was Money Train.

On the Money Train

A Wild West themed slot, the bandits are undoubtedly up to no good yet again.

No doubt, many readers will have heard of, played, loved and experienced the great authentic feel that the first Money Train had, and looking at Money Train 2, you can see that all of this greatness has just been amplified massively, breathing new life into this instalment.

Money Train 2 of course uses the same theme as it’s predecessor, but it’s so much more polished than before. Once again, the old Money Train will roll up, looking as mean as ever revealing the train cart themed reels, with a dusty and desolate town in the background.

The graphics have certainly been polished, shined, polished again, waxed and clear-coated for the sequel, and is every bit as impressive as the revamp we saw between Dead or Alive I & II.

The sounds and music of the game are impressive too, with a dramatic tone that sets the scene for a good old-fashioned train heist. Gunshots will sound as you spin the reels as you, as well as the bandits go into the game guns blazing.

Money Train is a 5×4 video slot with 40 set pay lines, all of which are active at all times meaning there’s no need to worry about bet levels, coin value or selecting or de-selecting lines to customize your bet.

Speaking of betting options, the stakes available to play with in this game start at a low 0.10, and go as high as 20. Not the most expansive option of staking options in the world, but it should be more than sufficient for players of every kind, whether you prefer to play it safer or love the risk.

There are 9 Paying symbols in the game, with our highest symbol being our bad ass looking leader or ‘Necromancer’ as he’ll come to be known, carelessly, but confidently holding two electric rods.  The Collector, Sniper and Payer who are the rest of the crew make up the rest of the top symbols.

They have these names for a reason, and all will be explained when we get to the bonus. The game also has a Wild symbol which substitutes for all except the scatter symbol, and has a pay value of its own equal to that as top symbol.

Money Train 2 has a bonus buy feature, much like the first did, however it costs a little more than Money Train did, at 100x your stake. This is not available for players in the UK. 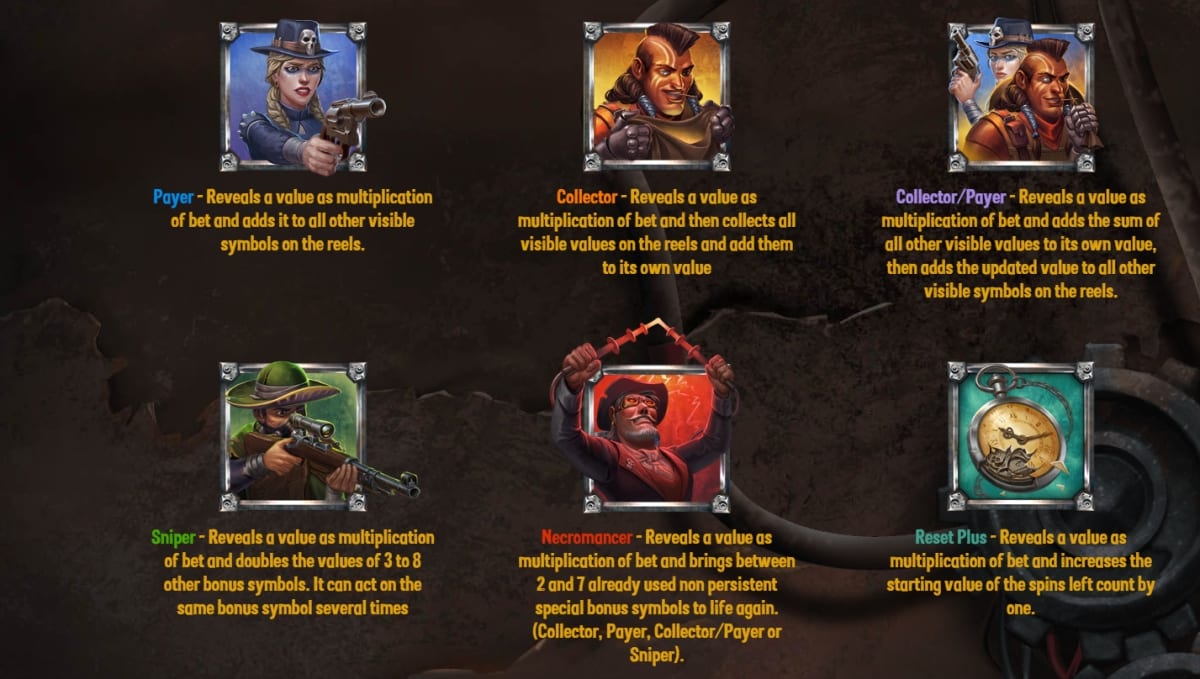 To win in the base game, 3 or more matching symbols will need to match consecutively from left to right. 20 symbols will fill the 5×4 reels and wins are calculated on 40 pay lines.

The game doesn’t have too much in the way of features in the base game, saving most of the excitement for the bonus. It does however, have an exciting Re-Spin feature.

At least 3 scatters are needed to land the bonus, so landing 2 unfortunately won’t get you there, but what it will do is trigger the Re-Spin feature. The Re-Spin feature is always triggered when two normal bonus symbols land anywhere on the reels.

This is an interesting feature and probably the only time you’re hoping for a game NOT to win. With each non-winning spin increasing the multiplier, you’ll want to hold out as long as you can without a win to get your multiplier in a bid to land a nice hit.

The Money Cart bonus round is triggered by landing 3 or more bonus symbols anywhere in view, and persistent symbols can substitute for the scatters.

When the bonus round starts, each of the scatters will reveal a multiplier value, or in the case where a persistent symbol was used, it will reveal its action before the spin.

The board will start off as a 5×4 reel set up, and 3 re-spins will be awarded, giving you a chance to fill the empty positions. Landing a symbol in an empty space will reset the spins to 3, and spin again until the spins run out.

Bonus Symbol – Reveals a value between 1x and 10x your bet

Payer – Reveals a value as a multiplication of the bet and adds it to all other visible symbols on the reels.

Collector – Reveals a value as a multiplication of the bet and collects all visible values on the reels and adds to own value.

Sniper – Reveals a value as a multiplication of the bet and doubles the values of 3 to 9 other bonus symbols and can act on the same bonus symbol several times.

Necromancer – Reveals a value as a multiplication of the bet and brings between 2 and 7 used non-persistent symbols to life again (Collector, Payer, Collector/Payer or Sniper)

Persistent Payer– Reveals a value as multiplication of the bet and adds it to all other visible symbols for that spin and any subsequent spins that follow.

Persistent Sniper – Reveals a value as a multiplication of the bet and doubles the values of 3 to 8 other symbols at the end of that spin and any subsequent spins.

Persistent Collector – Reveals a value as the multiplication of the bet and then collects all visible values on the reels and adds them to its own value at the end of that spin and every subsequent spin.

This bonus has so much going on, and with it, so much potential to hit big. To add to it, fill a reel with symbols and an addition al reel will be opened, this can happen a maximum of two times in each bonus round.

If you’re really lucky and manage to fill every empty space, then the bonus round will end and award an absolutely huge 500x your bet win.

If you entered the bonus via the ‘Buy Feature’ the RTP for the bonus bet will be 98.00% and guarantees a minimum of 3 bonus symbols.

Money Train is an absolute delight in all possible avenues. The graphics/design and sounds are refreshing and a huge improvement from the first game.

As well as improving graphically, the game has also improved on the first in lots of other ways, as any good sequel should. The Re-Spin feature when landing 2 Scatter symbols is a welcome feature, and can set you up with some nice wins in the base game.

Where the game really shines though is the bonus, it’s a nice nod to the original game that we all loved but with a lot more going on.

The addition of persistent symbols as well as expanding reels makes for an exciting experience, and no two bonus games will be quite the same as you sit back and enjoy the different mechanics different symbols bring to the bonus.

The game has an absolutely huge maximum win of 50,000x, which is more than enough to make you throw away the 9-5 grind to join a life of crime with the Money Train Bandits!

The game is high volatility action personified, so while the bonus is enjoyable, it can definitely leave you with nothing, or everything.

Relax gaming should be proud of this one, who took the formula for an already exciting game and nurtured it to make it even better.