What other-worldly magic, and more importantly, wins, will you bear witness to? iSoftBet have been churning out some bangers recently with games like Greta Goes Wild, Western Gold Megaways and the immensely popular Morgana Megaways.

It truly seems like imagination knows no bounds with this provider, and it’s exciting to see what touch of magic has been imbued into the mystical Phantasmic Fortunes Slot.

Mystery surrounds every aspect of the game visually. By definition, Phantasmic relates to the nature of illusion, lacking reality, delusive and delusory…even dreamlike, and it certainly shows.

In the background you’ll see a mysterious man with green, glowing eyes, conjuring a green flame from the palm of his hands with candles and glowing skulls in the background.

A mysterious and dramatic soundtrack accompanies and compliments the peculiar and mystifying visuals, making for an altogether eccentric and perplexing theme. It’s been very well done.

Everything looks crisp and the animations are executed expertly, which is something that’s been a regular occurrence from iSoftBet.

The stake you usually play on and depending on how risk averse or not you are will determine whether or not you think the staking options for Phantasmic Fortunes Slot are broad.

For the vast majority, the options presented will more than cover your needs, with bets as low as £0.20. The highest bet available is £20 per spin, so a very small minority of players who play on huge stakes bigger than this won’t find it here.

There’s lots of options in between the two boundaries though, the options should be more than satisfactory to 99% of players.

As far as symbols go, the top symbol is represented by the Top Hat. Cards, Green Vial, Compass and Crow are the other high paying symbols in the game.

Low symbols are represented by Heart, Spade, Diamond and Club. There is also a Wild symbol, which substitutes for all symbols except Scatter. These Wild symbols only appear on reels 2, 3, 4 & 5. 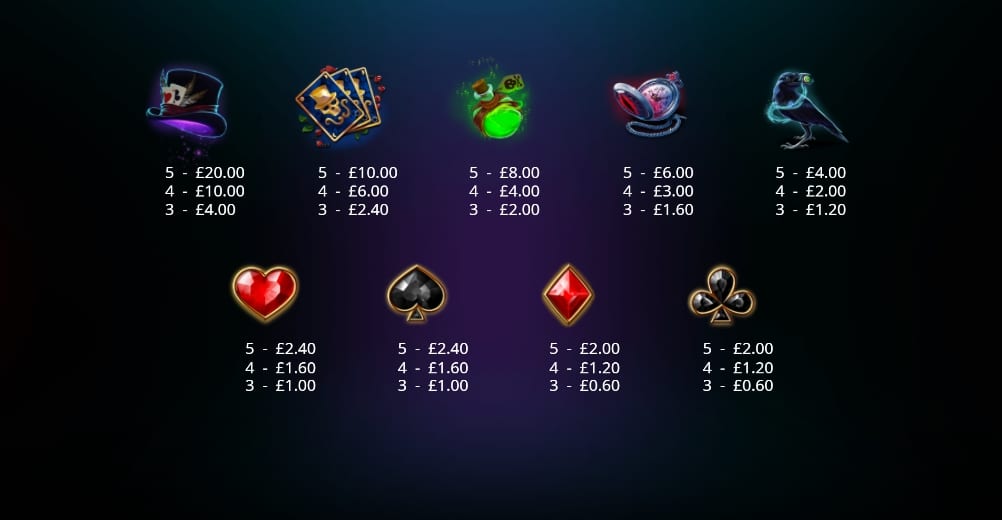 Phantasmic Fortunes Slot is a 5-reel video slot which will start off with a standard 243 ways to win. Ways to Win is a term used to describe slots that ignore the traditional payline mechanic, meaning that symbols will pay if connected on adjacent reels regardless of their position on the reel.

To form a win in Phantasmic Fortunes Slot, you’ll need at least 3 matching symbols, or 2 and a Wild, on consecutive reels starting from the left-most reel.

At the start of the game, the game will ‘reveal your fortune’ where it will place 5 orbs atop the reels displaying various different prizes. This could be in the form of a multiplier of your bet, features or bonus orbs.

The game will always begin at 243 ways. To expand the ways, you’ll need a diamond symbol to land in view, which will activate the Xpanding Ways mechanic on the reel it landed on, increasing the size by 1 on the next spin. Continue to grow reels to reach the orbs which will award the aforementioned different prizes. Two of the prizes come in the form of features, these can either be Phantasmic Wilds or Magic Wilds. 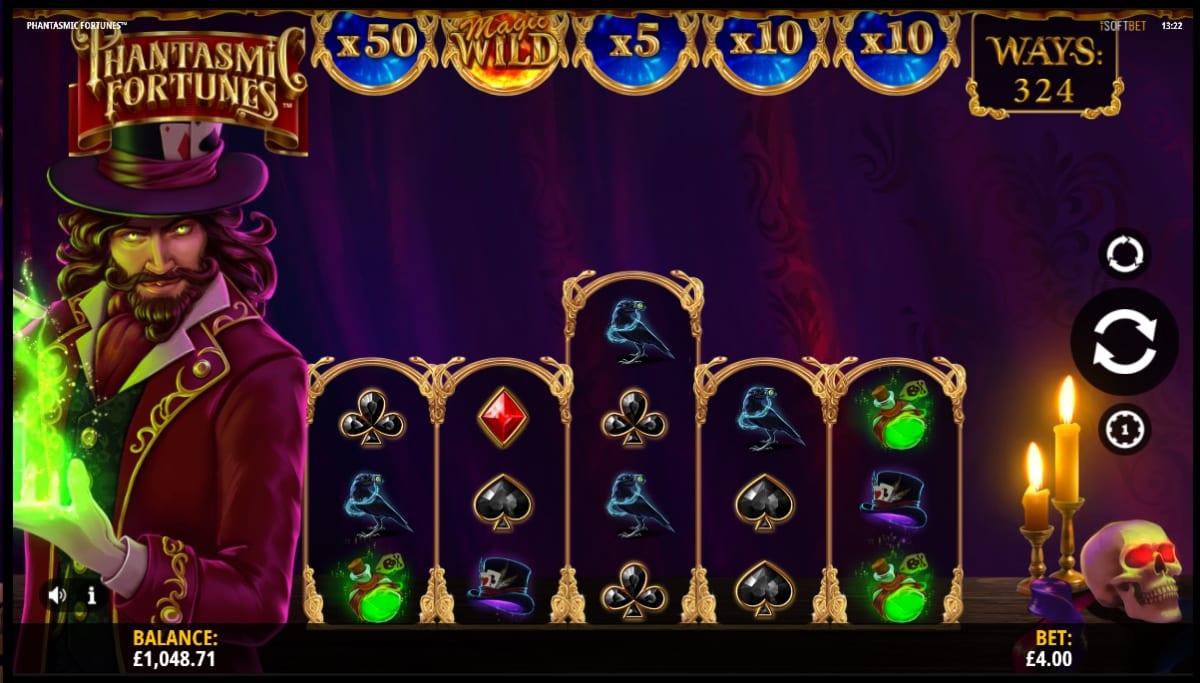 Magic Wild will add 2, 3 or 4 random Magic Wilds. Up to 6 random Wilds can be added in total across all reels.

Magic Boost can randomly trigger after any orb win. This will instantly increase the size of up to two reels to create additional winning ways and a head start in collecting other orbs.

Free Spins in Phantasmic Fortunes Slot can be triggered in two ways. One is landing 3 Scatter symbols on reels 2, 3 and 4, and the other is reaching a Bonus Orb as one of the prizes of increasing the reel size in the base game.

You’ll start off with a standard 243 Ways to Win, and like the base game, you’ll need to collect diamonds to increase the reel size and number of ways for the next spin.

At the top of the reel you’ll see various Multiplier prizes, with some displaying a COLLECT underneath them. When an orb without COLLECT is reached, the prize is awarded and the reel will reset back down to its default size.

The orb will also reset, displaying a new prize as well as a COLLECT. Free Spins continue until you reach an Orb that also has a COLLECT attached to it.

Once finished, reels will return back to their original size in the base game, with new orbs and prizes to collect again.

Bet Multipliers in the Bonus are upgraded from that seen in the Base Game, available multiplier prizes in the bonus are the same as listed above, with the addition of a 250x, 500x and 100x prize now available.

Phantasmic Fortunes Slot is good fun, but can be a little bit of a grind as you spin away collecting diamonds to slowly grow the reels to receive a prize, but it’s interesting and a little bit different.

As far as volatility goes, iSoftBet have given it a high rating, with an 8/10 score. This will inevitably mean that the big hits are few and far between, and to be honest the potential as far as the maximum win goes is limited.

There’s no simulating maximum huge win stated by the provider due to the type of game it is, so the maximum you can probably expect is the 1000x orb, if you can manage to get it.

This is really big, and nobody would turn their nose up at 1000x, but to be honest there’s tonnes of games out there that have much higher potential.

Overall though, Phantasmic Fortunes Slot is entertaining, and does have its moments where it can perform well, but in the grand scheme of things it can get a little tiresome after a while, and definitely isn’t something that is ground breaking.