ISoftBet are back with another Megaways instalment, and this time we’ll be getting acquainted with the evil enchantress, Morgana Le Fay. Part of ISoftBet’s Twisted Tale series, Morgana Megaways Slot has us entangled in Arthurian Legend with King Arthurs arch nemesis.

ISoftBet have certainly utilised Big Time Gaming Megaways licence, having previously brought us the likes of Fu Fortunes, Aztec Gold, Majestic and Dragon Match. We’re excited to side evil and back Morgana, and hopeful for enchanting wins along the way.

Morgana Megaways is due to release 9th August 2020.

As If by Magic

A medieval themed slot, the scene is set with eerie and magical music, with house banners draped in the background and what looks like King Arthur’s round table in the middle.

Legends and stories of Morgana can vary, but she’s usually depicted as King Arthers half-sister, scheming against the king to usurp his throne, and stealing the legendary sword Excalibur.

In the loading screen of the game it even looks like she’s up to no good, with green magical fire conjured from her hands, as a chandelier sits upon a broken round table that the evil enchantress probably destroyed herself.

Morgana Megaways has 6 reels, and 3 or more matching symbols will form a win starting from the left-most reel. Each reel is capable of holding between 2-7 symbols, and all of these together will determine how many ways to win there are.

Ways to win varies every spin depending on how many of these symbols show up on each reel and can reach that staggering 117,649 ways that we’ve all become so familiar with from Megaways games.

Morgana herself as you’d imagine, is top symbol. Other premium symbols include a magical eye, a dragon and a gem. Low paying symbols are A, K, Q, J, 10 & 9. Wild symbols also exist and will substitute for all except scatter, and only appear on reels 2, 3, 4 & 5.

Mystery Symbols also make an appearance in the game, these can transform into any symbol except scatter and wild, and all will turn into the same symbol.

Betting options aren’t the most extensive we’ve ever seen, with the lowest option being 0.20 and the highest at 20.

Players outside the UK will have a bonus buy option, which is available for 80x your current stake. 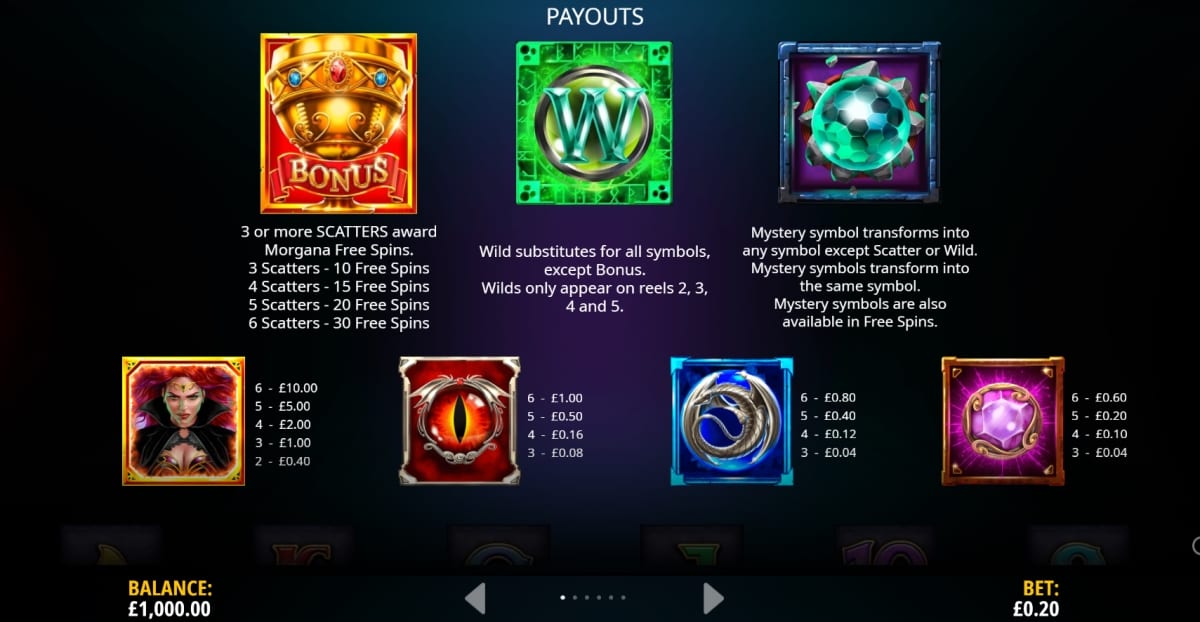 The Base Game of Morgana Megaways Slot

Each spin, 2-7 symbols can fall onto each reel, and the total number of these will determine how many ways there are to win. You’ll need to match 3 symbols consecutively from the left-most reel to form a win.

Symbols in Morgana Megaways do not disappear when a winning combination occurs to make room for new symbols, which is a little disappointing as this is arguably one of the best things about Megaways.

Still though, the game does have an interesting feature which can occur on any spin called Max Megaways, as you’ve probably guessed, this will force the reels to display the maximum number of symbols, which presents 117,649 ways to win.

Max Megaways can be hard to come by in any Megaways game via normal play appearing very rarely, so this is a welcome feature to be included.

To trigger Morgana Free Spins, 3 or more Scatter symbols will need to land anywhere in view.

During Free Spins, you’ll need to collect a certain number of symbols to be awarded a multiplier prize, additional spins and boost the minimum Megaways.

Big wins await for those who can climb the ladder of symbols to get to the top, and as symbols get less rare, less are generally required to progress to the next level.

The Bonus can be both exhilarating and a little dull. On one hand, collecting all the symbols to progress to the next level and a multiplier reward is great. But with all spins at 1x times your stake, the wins you do get can seem kind of bland. Unless you manage to get to the top symbol and top Megaways, in which case each spin can be very exciting indeed.

One thing that is favourable about the bonus is the fact that mystery symbols can also appear, which at high Megaways can be extremely rewarding, and can also change into one of the symbols you need to collect, giving you that boost to the next level. 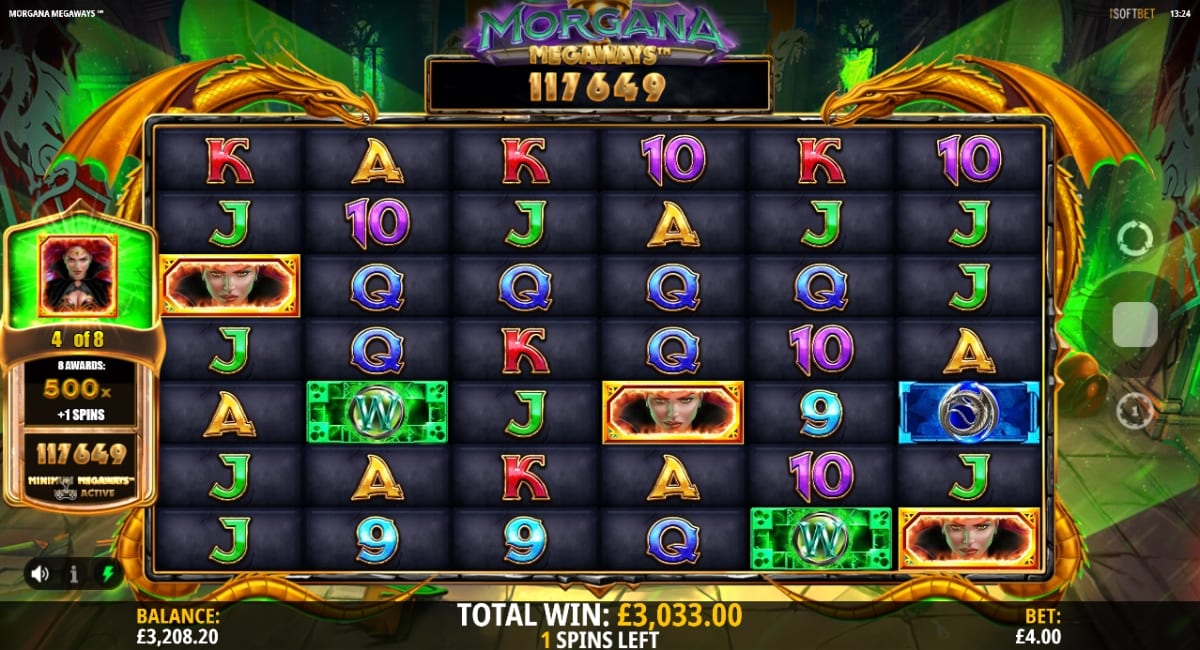 Our Verdict of Morgana Megaways

ISoftBet recognises the value and demand of the Megaways engine, and have capitalised on this familiar mechanic with an unfamiliar theme.

The base game can induce a forced Max Megaways and does have the capability to drop mystery symbols on any spin, meaning that the Base Game too holds potential of its own.

To really see the benefit and potential of the game, you’ll either need to be extremely lucky, or land more than 3 scatters. 3 Scatters can make the bonus extremely hard to progress in, and might result in some less than exciting wins for some.

Symbols don’t cascade which is a little disappointing, opting for a Multiplier reward and minimum Megaways instead. You can sort of understand why they’ve done it, due to how mad the game could go if you reach top Megaways and cascading symbols…but Return of Kong Megaways did it.

The symbol collection is really fun though, and it’s great waiting in anticipation for the symbol you need to drop and a euphoric feeling when you progress onto the next level.

Overall though, it’s a really enjoyable game, with a maximum win potential of over 10,000x and will resonate well with people with a soft spot for a bit of medieval magic.