The Reel King is back! This classic icon has just received a modern twist in Reel King Megaways Slot

This isn’t the first time Inspired Gaming have taken an old classic and given it a modern makeover, they did it with Centurion Megaways, which of course, given the successfulness of the series has done very well.

It makes sense that the classic Reel King would get such a revamp as well. The Reel king brand has more than 3 billion lifetime plays, and we’re excited to see what old features have or haven’t made their way into this new version, and even more excited to see the new features at play.

Reel King Megaways Slot has stayed true to itself, and embodies the theme and design seen in the original, but with improved, sharper graphics.

The sounds are all very reminiscent of something very classical as well, so this game will bode well with those old school players looking to get that classical experience.

Reel King Megaways has 6 reels, and 3 or more matching symbols will form a win starting from the left-most reel. Each reel is capable of holding between 2-7 symbols, and all of these together will determine how many ways to win there are.

Ways to win varies every spin depending on how many of these symbols show up on each reel, and can reach that much love 117,649 ways to win, which is maybe the defining feature from Megaways slots that we all know and love.

Betting options are pretty standard, and is in line with what you’ll see in most Megaways games, with a low option of 0.20 and a maximum of 20, the basis is pretty much covered to cater for all kinds of different players.

The symbols used in this game are very familiar and give you that classic slot feel yet again. Top symbol is a bag of gold, and this game actually uses A, K, Q, J, 10 & 9 as other high paying symbols, something not often seen these days.

Watermelon, Plum and Cherry serve as the lowest paying symbols. The Wild symbol is also present, and substitutes for all symbols. 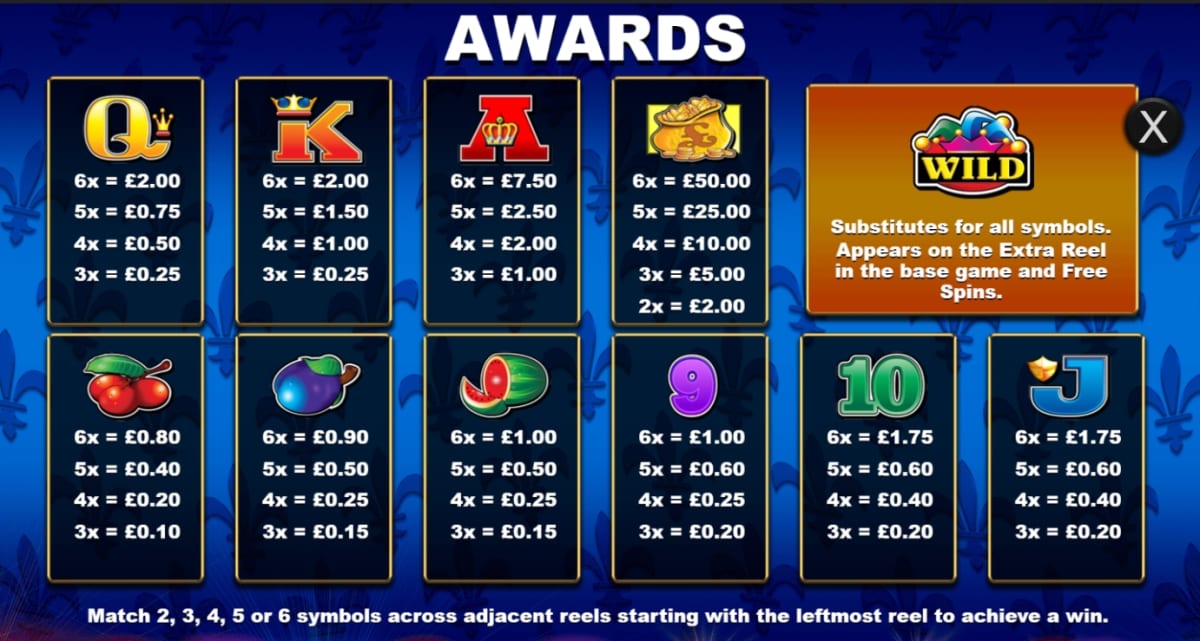 Reel King Megaways features cascading reels, so when a win occurs the winning symbols will disappear from the play area, allowing for new symbols to fill their space via a cascade.

Cascading reels will drop a symbol the same size as other symbols already on the reel, so Megaways will not fluctuate from win to cascade.

As fun as Megaways are on their own, Reel King Megaways packs some little extras in there to make the experience even more enjoyable

Lit Reels became a little bit of a staple for the Reel King Series. During the base game, between 0-6 Reels can become lit on any spin and produce a ‘ding’ sound. Dings will occur consecutively from left to right, and any subsequent cascade will light an extra reel.

Depending on which Reel King Feature you got, 1 – 6 Reel Kings will appear over the reels. The player begins on the leftmost position on the free spins trail, and each Reel King will spin his reels, with prizes available depending on the winning combination you get.

If all three reels of an Individual Reel King light up when landing, the player advances one position along the trail.

If a Reel King spins a losing combination and has less than 3 lit reels, he will disappear. The feature ends when there are no Kings left on the reels.

Reel King, Super King and Mega King have different trails, and if a free spins trail position has been reached at the end of the feature, then the Free Spins bonus will be triggered. 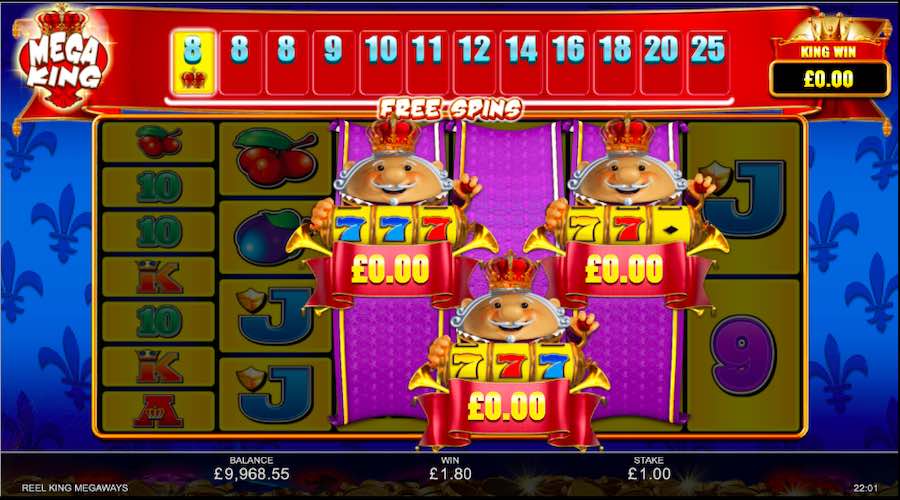 The amount of free spins and current multiplier are displayed at the top of the screen, and each winning cascade increases the multiplier by 1.

Each cascade will also once again light the reels, this time red, and filling all 6 reels will trigger the Reel King, who will appear and grant 1, 2 or 3 extra spins, and increase the current multiplier by either 0, 1, 2 or 3.

Red Reels do no disappear between spins, and remain until the 6th reel is reached.

You’re able to gamble any cash and spins from the Reel King Feature for a chance at more spins. Prizes for winning or losing the gamble are shown at the top of the screen, and the spins can be gambled until the end of the Free Spins Trail is reached, where a maximum of 25 Free Spins are available.

Spin Chance is triggered if the credit goes below the current value of the bet, but is above zero. Gamble the remaining credit for a chance at another spin at the current stake, or nothing at all.

Reel King Megaways gives off that vibe of your favourite and nostalgic pub classic games, while giving you a modern twist with new and improved graphics and features.

The Reel King Feature is an interesting one, but consecutive wins are harder than you might think to obtain, even from a Megaways game.

When you do manage to get to the Free Spins, it’s quite exciting with a classic Megaways progressive Multiplier, as well as the lit reels for a chance at more Free Spins and a Multiplier increase.

Overall, this is a loveable classic done well and it’s hard to find many faults with it. If you love that authentic slot experience with a soft spot for modernism then Reel King Megaways is the slot for you.