Classic meets modern in a not so hidden gem from iSoftBet, The Ruby Megaways!

The Ruby Megaways promises some of your favourite Megaways action, paired with a classic fruity theme, something sure to appeal to old school gamers!

iSoftBet have been busy on the Megaways games of late, with a brand new remake of Aztec Gold: Extra Gold Megaways, as well as the gripping Neptune’s Fortune Megaways.

iSoftBet haven’t just been making Megaways though, they have an upcoming Pirate themed release that looks to be stormy called Sea of Riches.

The Ruby Megaways doesn’t quite look as imaginative of some of these aforementioned titles, but the statistics certainly look attractive, with wins capable of reaching a huge 37,500x.

The Ruby Megaways is as bout as old school and  classic as it gets. with a strong old school fruit machine vibe, and symbols to back it up.

You’ll see background adorned with Rubys, Gems and Coins, with Coins even littered across the top of the reels.

It all screams ‘big money’. It loks like The Ruby Megaways has a bit of cash to spare, hopefully the machine is feeling generous.

Old School themes may have faded, but they’ve never died. Even today you’ll still find popular providers going back to the roots of what Slots are all about with them lucky 7’s and BAR symbols.

Some people find it a little bit dated, but there’s evidently still a wide variety of players who still hold it dear, including us!

Affectionate soft spot for the old school stuff aside, The Ruby Megaways looks graphically nice, which is unsurprising given the iSoftBet name behind it.

The Ruby Megaways: Betting and Symbols

This is pretty standard for a lot of Megaways games. Not a lot of them make their highest maximum the £/€100, but these two options and all of the options in between should be more than sufficient for almost all players.

The old school fruit machine vibe shines through yet again in the symbols, with the Ruby Gem as the highest paying symbol in the game.

Everywhere else, you’ll notice 7’s, Bells, Money Bags, Cherries & BAR in a trip down memory lane. There’s a Wild Symbol in the game, which will substitute for all other symbols except for the Scatter.

The Ruby Megaways: The Base Game and Features

In order to form a win, you’ll need at least 3 matching symbols to connect from left to right, starting from the left-most reel.

Megaways should be stranger to nobody now, having taken the gambling world by storm. For those who aren’t aware though, it works like this…

The 6 reels present in a Megaways Slot is usually accompanied by a sliding reel that covers reels 2-5.

On every spin in The Ruby Megaways, Symbols will drop down onto each reel, with a maximum of 7 symbols per reel and a minimum of 2.

Depending on how many symbols are present will depend on the Megaways, or ways to win. More symbols mean more chances at winning combinations and bigger wins.

The Ruby Megaways also has another popular Megaways feature commonly seen among slots in the same family – Cascading Symbols.

When a win is formed, the winning symbols will disappear from the board, creating room for new symbols to fall in via a cascade.

If symbols in the sliding reel were part of a win, then they’ll also disappear. Any remaining symbols will move left until all spaces are filled.

Anyone well versed in the world of Megaways Slots will know all too well that pay outs in the Base Game can be great if you get a good number of ways to win and a chain reaction as a result of cascading symbols.

Making The Ruby Megaways even more attractive, and true to your classic idea of a Megaways, is the Mystery Magic mechanic. 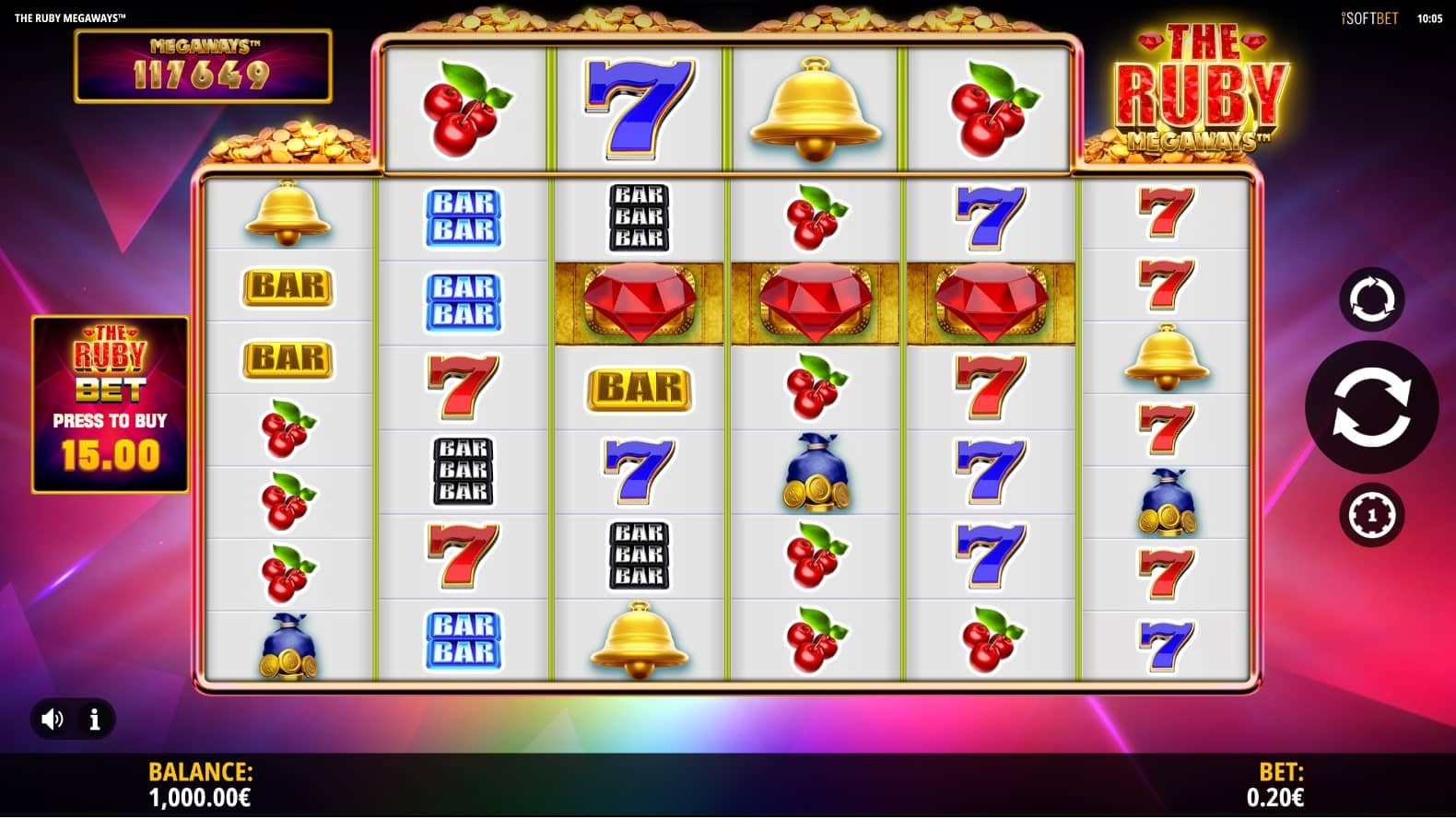 Mystery Symbols can land on any spin.

These will appear as question marks on the reels, and they’ll all turn into the same symbol.

Everyone has seen this feature in countless Megaways Slots before, so it’s no real surprise that it’s included.

In order to trigger the Free Spins in The Ruby Megaways you’ll need at least 4 Scatter Symbols, which gives you 12 Spins.

If you manage to get additional Scatter Symbols then you’ll get an extra 5 Spins, up to a maximum of 27 Spins.

Every win in The Ruby Megaways will increment a progressive multiplier.

Like in other Megaways Slots, the Scatter Symbols may now only appear on the top sliding reel, with 3 or 4 Scatters awarding 5 or 10 spins respectively.

A big Multiplier and Mystery Symbols go hand in hand together for them much desired big hits, but if luck is against you and you don’t manage to build the Multiplier then you could well end up with a meagre bonus. Typical Megaways. 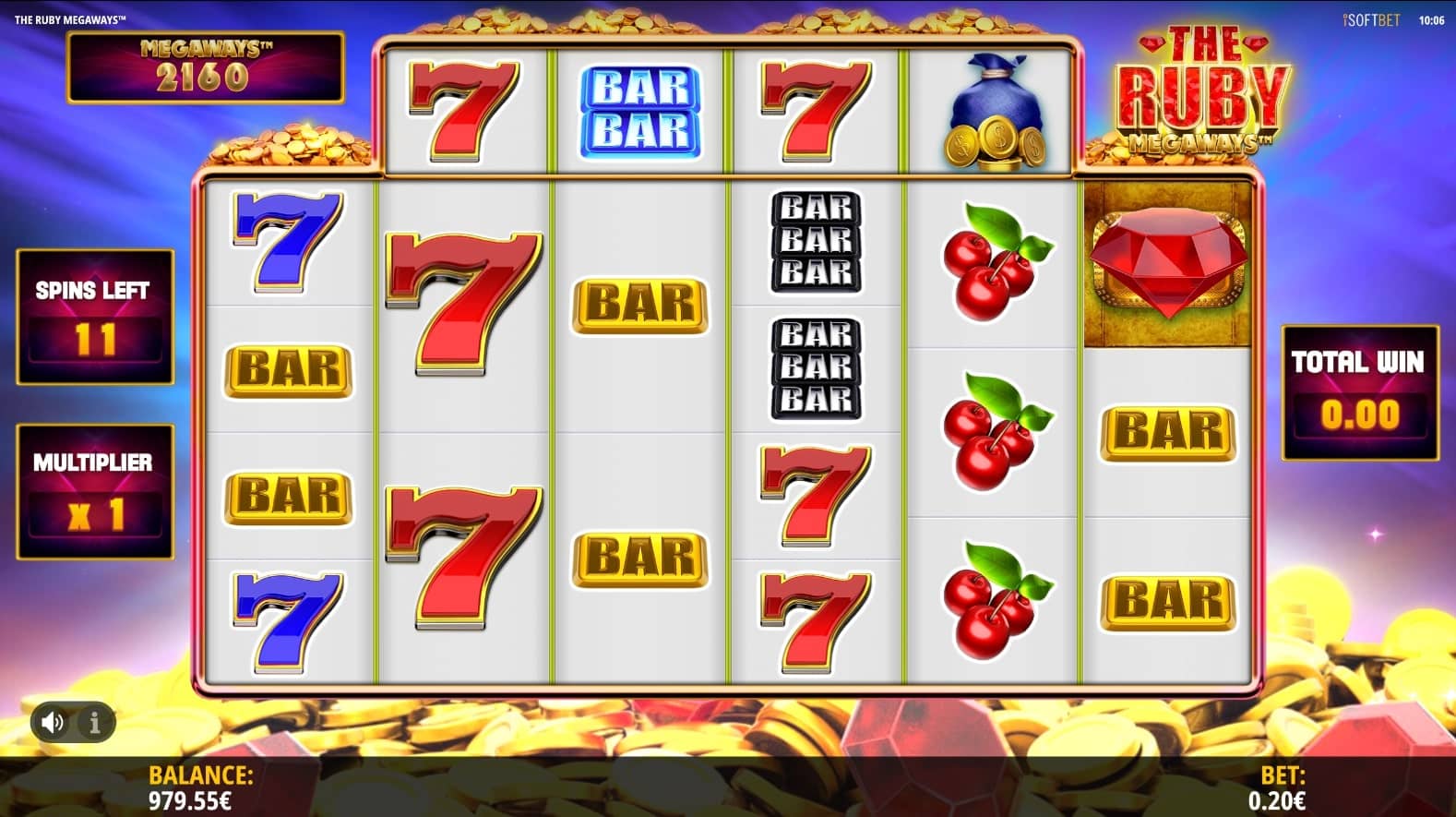 The Ruby Megaways is one of iSoftBet’s many Bonus Buy Slots.

Those within Juridstictions that allow it can buy their way into the Free Spins at a cost of 75x your stake.

This guarantee’s at least 3 Scatters.

The RTP for The Ruby Megaways changes a bit when using the Ruby Bet option. The RTP is 96.11 as standard and 96.86% when using Ruby Bet

Where to Play The Ruby Megaways?

The Ruby Megaways is due to release on 21.04.2021, and it will be available to play at most New Casinos!

You’ll also find The Ruby Megaways at some of your favourite Online Casinos, like Unibet and Videoslots

Both Unibet and Videoslots are renowned for their library of great games. They’re home to some of the best that iSoftBet has to offer too!

The Ruby Megaways Slot: Our Verdict

We’ve seen this style of Megaways done countless times before, in countless different themes, including a classic fruity theme.

The Ruby Megaways brings nothing to the table in terms of innovation, as it’s effectively a reskin.

If you love Megaways Slots, and you love the classic Fruity theme, then The Ruby Megaways may well be a game for you.

If you’re dying for a bit of much needed innovation, and you’re fed up of playing the same Megaways game again and again, then The Ruby Megaways doesn’t offer the salvation that you’re after unfortunately.

We know that iSoftBet are capable of better, that much is proven in their Twisted Tale series with slots like Morgana Megaways and Queen of Wonderland Megaways.

The Ruby Megaways doesn’t make the cut, but we can hope for more titles in the future that are more on the level of the aforementioned twisted tale games.