Big Time Gaming absolutely love a game show. That much is evident from their previous instalment, Who Wants to Be A Millionaire Megaways.

Wheel of Fortune Megaways Slot invites you back to relive the 90’s in front of the TV to solve some puzzles and win some prizes.

Big Time Gaming want to take things a little bit further than they did with Who Wants to Be a Millionaire Megaways. You can kiss goodbye to a mere 117,649 ways to win, because Wheel of Fortune Megaways Slot can go all the way up to 1 Million. Well, not quite kiss goodbye, because 117,649 is still the maximum in the Base Game, but you can look forward to up to 1 million in the Free Spins.

This exciting change will undoubtedly manifest into some thrilling gameplay and the potential to go big!

The theme for Wheel of Fortune Megaways Slot is full of glitz and glam as you gaze upon the stage of the show, which is dazzled with light and colour, and The Wheel of Fortune itself is presented as an animated logo at the top of the screen.

Chatter can be heard amongst the crowd, and the nostalgic tones of machines and a spinning wheel will sound out as you spin the reels.

Overall, Big Time Gaming have done a half decent job and visualising the game show and importing it into a Slot setting.

The betting options for Wheel of Fortune Megaways are really quite extensive, maybe too much so.

Careful not to accidentally select that one when you’re choosing your stake. Thankfully there’s no max bet button, so unless you’re really not paying attention then there isn’t much chance of that.

Symbols in the game are made up of what must be various prizes that can be won of the Wheel of Fortune. The highest paying symbol is the Diamond Ring, followed by the Airplane, Boat, and Car.

Low Paying Symbols are A, K, Q, J, 10 & 9, and there is also a Wild Symbol whchi substitutes for all symbols except Scatter.

Wheel of Fortunes Megaways Slot has 6 reels, and to form a win you’ll need to connect at least 3 symbols (or 2 of the top symbol) from left to right, starting from the left-most reel.

Decent wins are possible by connecting some of the higher paying symbols all the way across the reels, any die hard fan of a Megaways game knows that this much is true. However, it’s disappointing to see that Big Time Gaming decided not to implement a Cascade feature into Wheel of Fortune Megaways Slot.

Some games can certainly get away with it. Genie Jackpots Megaways can be forgiven entirely for its lack of cascading symbols due to the inclusion of a multitude of different and exciting features. Up to 1 million ways to win both explains the absence of this, and makes up for it, but this can only happen in Free Spins. That being said, Spartacus Megaways has cascading reels.

The game sort of makes you think that the things beside the reels that look like mini reels might do something…they don’t.

Not a lot to get excited about with them unfortunately.

There is a slight indication of redemption in the form of the Wild Megastacks, which are possible in the Base Game. 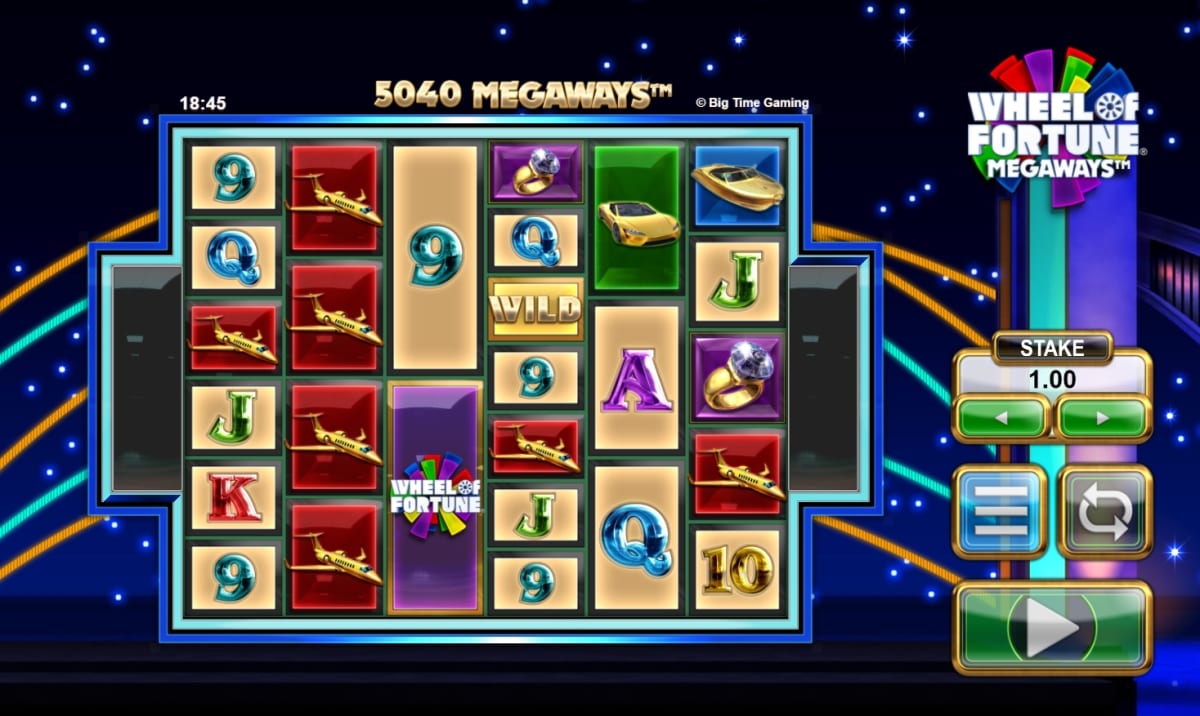 Wild symbols that land on the reel have a chance to transform into Wild Megastacks.

A Wild Megastack will expand to cover the entirety of the reel, and two may appear in Free Spins, expanding to up to 10 Wilds.

Wild Megastacks is certainly an exciting feature if you sit and think about it. It’s hard to fathom what sort of pay outs the Wheel of Fortunes could bestow if you got 2 Wild Megastacks!

There isn’t a gamble feature like there was in Who Wants to Be a Millionaire Megaways, which is fine, seeing as the audience in that slot seemed to want you to lose.

In Wheel of Fortune Megaways Slot, you’ll spin the wheel to reveal what your starting Megaways are, and Free Spins will commence.

Reels can expand to a maximum of 10 each, which will give you 1 million ways to win. Getting a reel to 10 will also re-trigger the game

The bonus is quite similar to the White Rabbit Megaways slot by Big Time Gaming, where you needed cupcakes in order to expand the reels. 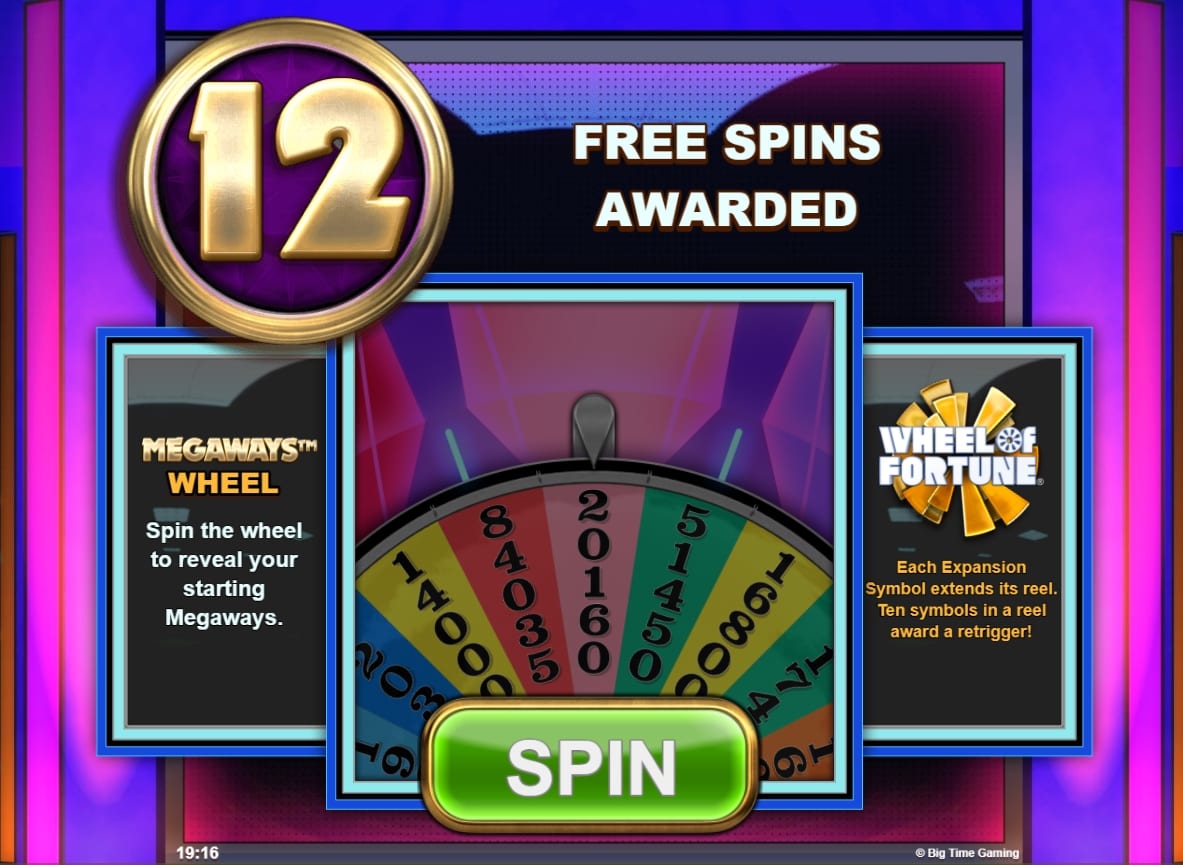 It’s not the first time Big Time Gaming have tried their hand at a branded version of a game, and the return to this kind of format will undoubtedly excite a lot of people, especially those who are long time fans of the game show.

The Base Game could do with a little more excitement, but the bonus can be full of it.

Realistically, you may not reach anywhere near the 80,000x mark, but White Rabbit Megaways fans will know all too well that this can go off, and the ways to win in this slot has been quadrupled compared to that.

In classic Big Time Gaming Style, the slot is pretty hard to bonus, so we imagine that opinions of who likes and doesn’t like the game will be divided between people who did and did not get the bonus.

It can be very tiresome grinding for one, and even the Wild Megastacks can’t satiate your hunger for a little bit of substance after a while.

Even Big Time Gaming know themselves know that their games can be tough to bonus, and they even often laugh about it among the community with a subtly implicit joke about the ‘D’ in ‘GOLD’ from Bonanza. You can’t deny that their sense of humour isn’t top quality, even if Wheel of Fortune Megaways isn’t.

People who aren’t into the game show vibe might find the theme a little boring, but you shouldn’t write it off on this alone because the gameplay may just make you a Wheel of Fortune fan after all…IF you get the bonus.

Wheel of Fortune Megaways is an upcoming game release, which will be available to play on most new casinos from February 2021.