iSoftBet have stunned many with their Twisted Tale games, which started off with the enthralling Morgana Megaways.

Following on from the crazy adventure that was Morgana was Queen of Wonderland Megaways, where we visited the Wicked Queen of Hearts in the wacky world of Alice in Wonderland.

This time round we’re off to Baker Street to step into the world of Sherlock Holmes with Jim Moriarty, arch nemesis and the worlds only ‘consulting criminal’. Moriarty has committed many a deplorable deed in his time, including the murder of Carl Powers who merely laughed it him.

This kind of unhinged personality makes Moriarty a perfect candidate to star in the next Twisted Tale game.

This particular Twisted Tale game isn’t without its heroes however, as Sherlock himself and his trusty friend Dr Watson also have a part to play.

With a magnifying glass in hand, let’s step into another exciting game by iSoftBet to see what it’s all about.

Moriarty Megaways takes us into a bygone era with Victorian London.

In the background you’ll see the cobbles of the big smoke and the old style street lamps and Victorian era architecture.

The artistic take on the world of Sherlock in this game is excellent, with even the reel border displayed as a grandiose baroque design.

iSoftBet have done great job with the Twisted Tale series in more ways than gameplay. Their animations and design always stand out, which is undoubtedly part of the reason why this series of games have received widespread acclaim.

Those with a soft spot for Sherlock Holmes or just Victorian style media in general will find that Moriarty Megaways has done a stellar job in setting the scene.

Closer inspection of the betting options in Moriarty Megaways revealed evidence that’ll be unsurprising to even the most diligent detectives, with a low option of £/€0.20 per spin and a high option of £/€20 per spin.

These are pretty standard options for not just iSoftBet games, but a lot of other Megaways Slots out there. These options and all of the options in between should be more than sufficient to meet the needs for most players.

Low paying Symbols in Moriarty Megaways are as you’d expect, with A, K, Q, J, 10 & 10, and high paying symbols are Moriarty himself, Sherlock, Watson, a Ring, and Chess Pieces.

The Pocket Watch Wild will substitute for all other regular Symbols.

Moriarty Megaways: The Base Game and Features

Moriarty Megaways takes more of a pure Megaways form than others in the Twisted Tale Series like Morgana did.

In order to form a win, you’ll need at least 3 matching symbols (or 2 of Moriarty) from left to right, starting from the left most reel.

At the top of the reels, you’ll also notice a horizontal reel. This is the sliding reel. Symbols in here will slide left if there is space to do so, which again helps to create winning combinations.

Wild Symbols only appear on the top sliding reel.

Megaways has inherent possibility through sheer number of winning ways and cascading symbols. Anyone who is well versed in the world of Megaways, and most are considering how many of them are out, will know all too well how potential rich even the Base Game for these types of games are.

That being said, most of the fun will be within the Free Spins round. 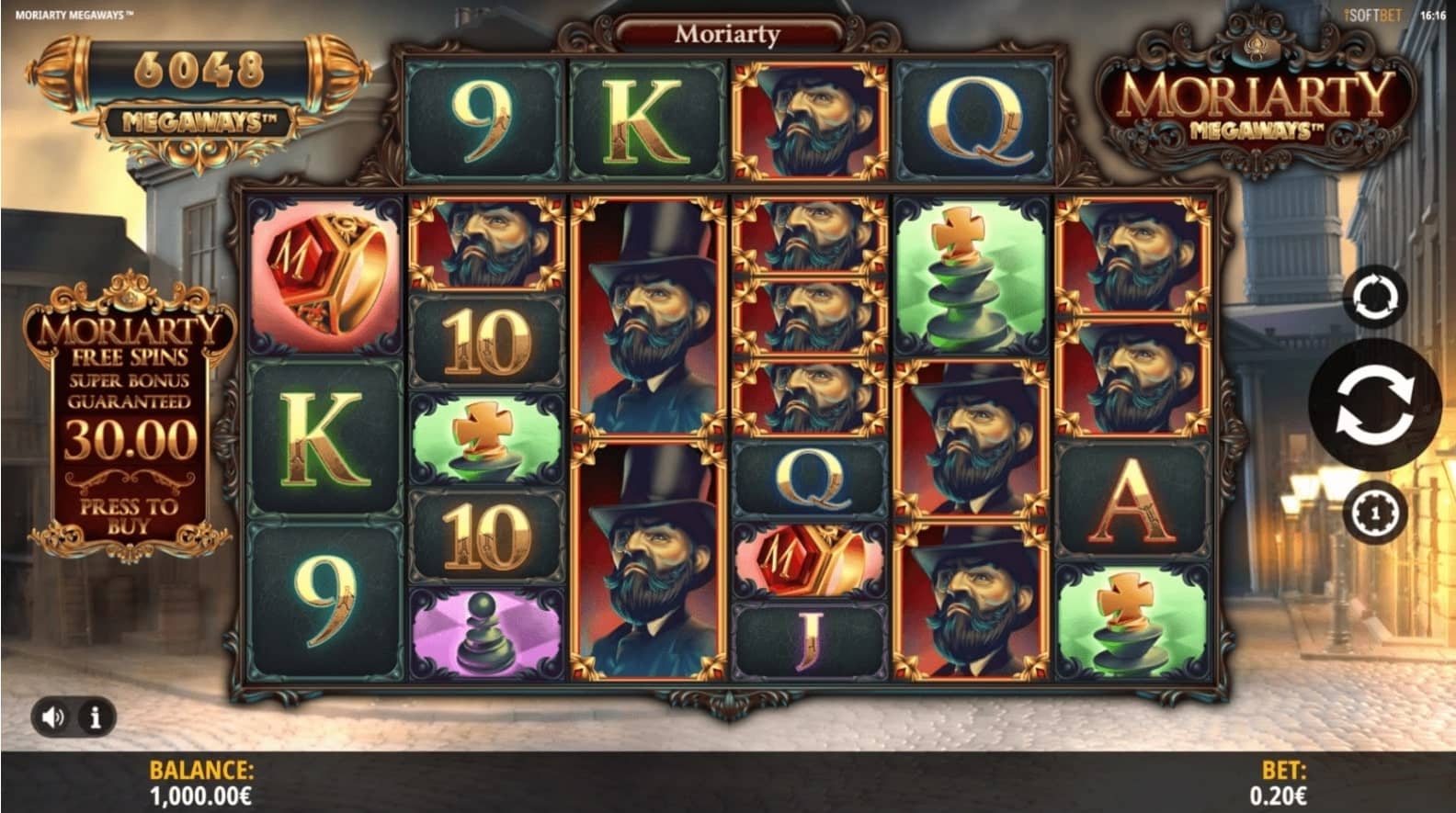 The Free Spins in Moriarty Megaways are triggered when 3 or more Bonus Symbols land anywhere in view, where 15 Spins are then awarded.

Extra Scatter Symbols will net you more spins, with +5 for each Scatter Symbol offered. The game can also be retriggered within the Free Spins by landing at least 3 Scatter symbols within the horizontal reel.

Moriarty Megaways takes a classic approach here with the incremental Multiplier for every winning Cascade. Huge wins are possible via big multipliers and big connections, and it becomes even more potent when Sherlock and Watson get involved.

At the bottom of the screen you’ll see Watson and Holmes, and the aim of the game is to collect their symbols. Collecting their symbols will reduce the counters that they display by one.

Once you’ve collected enough, then you’ll trigger the Watson Reels or the Sherlock Reels

Both of these features are very sought after. They’ll be key in raking in those big wins. Each of the features takes you to a little mini-slot where the counter once was, rather than on the main reel. 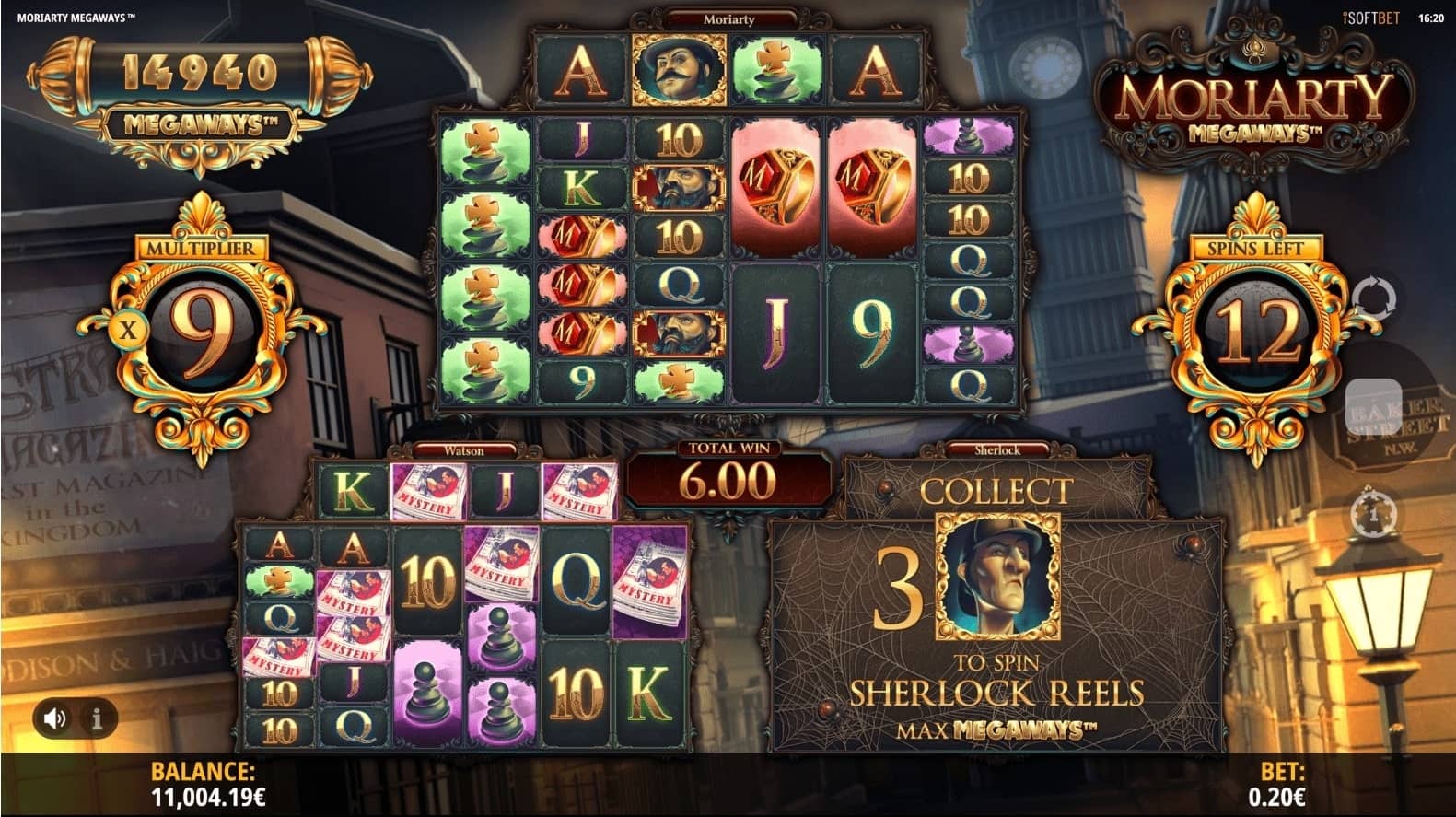 Those within jurisdictions that allow it will be able to utilise a Bonus Buy feature in Moriarty Megaways.

This costs 150x your stake, and will guarantee at least 3 Scatters

Moriarty Megaways: Where to Play?

Moriarty Megaways will release on 19.05.2021, and it will be available at most New Casinos!

Compared to other Megaways Slots that take on generic themes and features, Moriarty Megaways is a real breath of fresh air.

It’s true that Moriarty Megaways has a lot of the same features as your generic title, but iSoftBet make it more interesting with features like Watson Reels and Sherlock Reels to go along with the progressive multiplier, and as a result you get a slot with attractive wins of up to 37,500x available.

iSoftBet have really made the Twisted Tale series interesting, with characters that you might not usually see showcased in Slot Format, and the emphasis on the side of the villain rather than the hero for once is something that appeals to the dark side of all of us.

Statistically, Moriarty Megaways looks pretty much average, with an RTP of 95.98% and the high volatility you’d probably expect from a Twisted Tale games with a win capability this high.

It seems to be the case that 96% RTP is considered the decent average, but the difference between that and Moriarty Megaways is so negligible that it doesn’t really make a difference.

Free Spins in Megaways can sometimes be notoriously hard to obtain, but don’t let the illusion of only needing 3 Scatters fool you. Moriarty Megaways can be a little hard to bonus.

On average, iSoftBet has said that a bonus in Moriarty Megaways lands once every 1 in 450 spins.

This is one of the negative points of the game that has to be realised. It’s even harder to bonus than Neptunes Fortune Megaways, which landed a bonus once every 340 Spins (on average).

Despite the potential grind to get the Free Spins, Moriarty Megaways is a fine addition to the Twisted Tale Series of Games, and the Victorian Era London theme and phenomenal graphical fidelity only enhances the experience.