Dress to impress ladies and gents, Elk Studios want you to forget about living it large, and live it grand instead with their new instalment, The Grand Galore Slot.

Elegance is key, so drop the Stella Artois, grab yourself a glass of Armand de Brignac and dig out the old monocle, because we’re going out tonight.

Swedish developer Elk Studios have gone for something a little, or should I say a lot, different this time around with this impressive new slot.

The The Grand Galore Slot has potential that is a little uncommon, considering some of their other games, and they’ve implemented an incomprehensible number of ways to win.

Elk Studios have pulled out some bangers in the past. Their signature Gold Series including Black River Gold, Tahti Gold and Ecuador Gold always promise a good time.

Maybe my social class leaves me blind to aristocracy and the theme that Elk are trying to pull off here, maybe simplicity is swanky and minimalism is extravagant and something a wealthy exhibitionist might flaunt.

Sort of like art that people think is profound and deep but you just see lines and blobs…. On the other hand, perhaps Elk Studio’s idea of elegant and extravagant is out of sorts.

There really isn’t a lot going on here in terms of theme. The background is just some sort of red curtain, which is sparkling a bit, adding to the glitz and glam a little.

Was kind of hoping to see The Queen doing shots in the VIP section with Boris Johnson. Oh well.

The sound for the game isn’t bad, it’s a mildly extravagant theme, but overall, it’s not really that noteworthy to be honest.

The The Grand Galore Slot has 6 reels, and initially starts off with 4 rows, giving you an initial 4096 ways to win. Expanding this for more ways to win will require wins, but we’ll cover that later.

The The Grand Galore Slot has 9 paying symbols, top of which is a Panther adorned in gold and gems, with other expensive looking gems/crystals accounting for the rest of the high paying symbols.

A, K, Q & Jack are your low paying symbols, and a Wild is also present that substitutes for all symbols except for the Bonus Scatter.

Betting options are extensive enough for all players to enjoy. 0.20 is the lowest available bet for those just looking to play it a bit safer, with 100 as the top bet for those really looking to secure their place amongst the wealthy.

Those who have played Elk Studio games before will be more than acquainted with their betting strategy mechanics available to select, but for those who aren’t, it works like this. 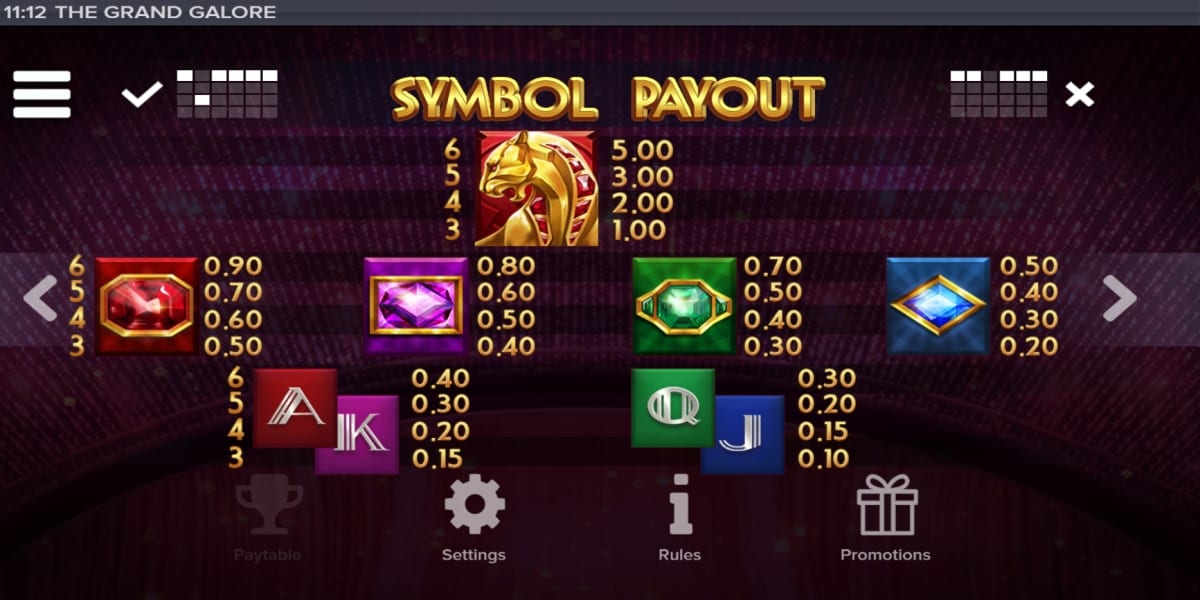 The Grand Galore features asymmetrically expanding reels with up to a massive 1,000,000 ways to win.

A win occurs when you hit 3 or more matching symbols consecutively from left to right, and all spins in the base game start with 6 reels, 4 rows and 4,096 ways to win, to expand this you’ll need to get wins…

All Reels that have contributed to part of a win will expand with one row. Both winning symbols, and the symbols added by the expansion will respin, giving you a chance to get another hit and further increase the ways to win.

Reels can expand up to a massive 10 rows.

Respinning symbols that are next to each other on a reel will always stop on the same symbol, which increases your chances at obtaining more wins and expanding the reels further.

With a Synced Respin, 2-5 neighbouring reels may randomly synchronize with each other during a respin. All synchronized reels stop on the same symbol.

Synced Respin is probably the best of the bunch, and will help you to expand those reels, and obtain those much-wanted big wins.

More symbols mean both more expansions, and more spaces clear on the reels to hopefully repeat the process

It’s clear that some inspiration was taken from the Big Time Gaming Megaways mechanic in this game, and there’s nothing wrong with that if there is.

Some providers just adopt the Megaways licence altogether, and some like Elk have a go at making their own features.

117,649 is probably everybody’s favourite number, because it is of course the maximum number of ways that you can hope to win with in a megaways game if all reels reach 7 high.

Well, The Grand Galore goes a step further, with the potential of a whopping 1,000,000 ways to win achieved when all reels reach 10 high.

Like playing Megaways Slots? You can play them on some of these new casinos.

The bonus game is obtained when 3 or more Bonus Scatter symbols land.

Free Spins can also be retriggered.

The bonus has all the fun of the Base game with some extra added features.

Every 5 win in the bonus game triggers the Grand Synced Respin on an increasing number of reels, from 2 up to a maximum of 5 reels.

Once again, reels can expand up to a maximum of 10 rows.

The bonus is an interesting one to say the least, and it goes without saying that your aim here is to expand them reels as much as possible, opening up them ways to win for bigger hits.

The Grand Galore is an interesting slot, but gets a little tedious at times. Apart from the expanding reels, there’s no real defining features at play for you to enjoy.

Most of the time will be spent trying to obtain them wins, where you’ll expand the reels, miss a connection and revert back to 4,096 ways to win.

The Bonus can be a tough one to get, and free spins where triggered after about 300 were lined up for autoplay.

This game is one of the higher paying ones that we’ve seen from the developer, and wins of up to 10,000x are up for grabs.

The reason for this disparity between this, and their other games is of course the 1,000,000 ways to win. The game would have to be ultra-low paying if they were to use their usual max win amounts.

The game is high volatility action, which will please a lot of players, and it has an OK RTP of 96%. But big wins are achievable for those who can persist through it and get the bonus.

Overall, the expanding reels is quite exciting for a little while, but gets tiresome rather quickly. But credit where it’s due, its something different from Elk Studios, and certainly has impressive aspects to it.

You should definitely give it a try, but don’t expect it to be your favourite game, or one that you continually come back to.