Fire in the Hole xBomb Slot

NoLimit City have had an outstanding start to 2021 with the release of their San Quinten xWays, where you toughed it out in the biggest and baddest prison there is, and East Coast vs West Coast, where you chose your allegiance to LA or New York in a gangland battle!

You’re neither incarcerated or about to be incarcerated in Fire in the Hole xBomb Slot, but you are taking a trip down to the mines, so you still won’t see the light of day for a while.

Fire in the Hole xBomb looks to be another immensely exciting instalment, with the implementation of their brand new xBomb feature, as well as Wild Multipliers, Lucky Wagon Spins, Collapsing Mines and Wild Mining Features.

The Dwarfs down in the mine do not mess about, so you’ll have to be tough, resilient and have a stomach for beer as you chip away at the rocks for a chance at the 60,000x max win.

Fire in the Hole xBomb Theme

Fire in the Hole xBomb Slot puts you so deep in the mine that sunlight is but a distant memory.

Lanterns, tracks and barrels can be seen down in the mine, with a barrier that encloses the reels to stop it all from caving in.

There’s a lot to be said about NoLimit City’s emphasis on design quality. The illustrations of the game have been done in a sort of cartoon style, and everything visually looks crisp. Professionalism is something NoLimit City strive for in all aspects of their games, and it really shows in all of their releases.

Of course, this has been something we’ve now come to expect from the provider, who have long since been dazzling the community with their impressive visual design.

There’s no one set style from NoLimit City. Each and every one of their slot designs are different. If you looked at games like East Coast vs West Coast and Harlequin Carnival, then you probably wouldn’t even think they were by the same people if you didn’t know any better.

It’s because of this versatility that NoLimit City are renowned.

Betting options in Fire in the Hole xBomb Slot are vast, as is the case with all NoLimit City games.

The top symbol in the game is the Lantern, followed by the Satchel, Boots, Rope and Pickaxe. Low paying symbols are K, Q, J, 10 & 9.

There is also a Wild symbol, which will substitute for all symbols except for the Scatter symbol.

Fire in the Hole xBomb has 6 reels and 486 ways to win by default. To land a win, you’ll need to connect 3 or more symbols from left to right, starting from the left-most reel.

Ways to win can increase up to a massive 46,656 ways when the height of the reels increases upwards to 6 rows.

There is a lot to look forward to in Fire in the Hole xBomb, with a lot of different features to shake up the gameplay. One of the most exciting things is their new xBomb feature, but one of the first things that you’ll notice when you start playing is the Collapsing Mine feature.

On each spin, there will be 3 active rows.

Each collapse will create an additional row, up to a maximum of 6. 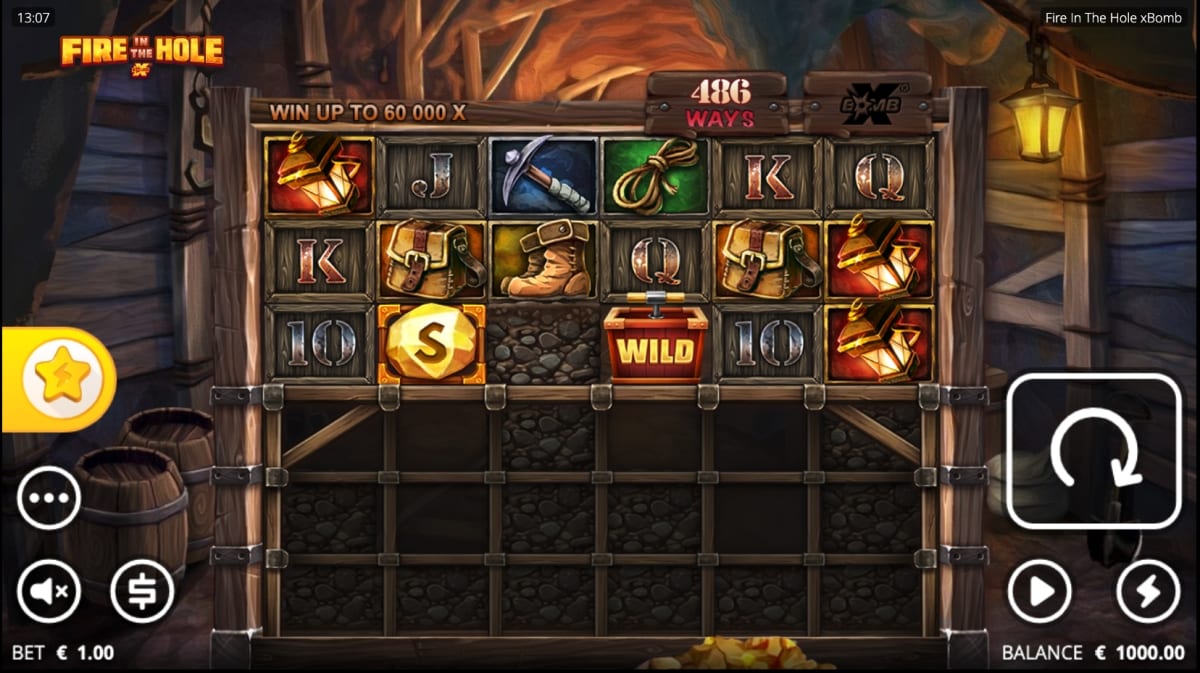 xBomb symbols are wild. When these land, they will explode, increasing your win multiplier by one.

The xBomb will trigger even if there is not a win on screen. The explosion caused by the xBomb will cause new symbols to fall in via the Collapsing mine feature, which will increase the ways to win.

With the collapsing mine and xBomb feature, Fire in the Hole xBomb is already shaping up to be a classic NoLimit City thriller, but as well as these two captivating features, we also have the Wild Mining Feature AND the Lucky Wagon Spins.

The Wild Mining Feature will trigger in the Base game when there are 3, 4 or 5 of the same symbol that align horizontally and there are no winning combinations.

The positions that triggered the feature will be removed, creating Wild symbols instead.

Lucky Wagon Spins will be triggered when 3, 4 or 5 Scatter Symbols land anywhere in view.

Lucky Wagon Spins will bring a little bit of familiarity with enhancing reels at the top of the screen that will shake up the gameplay with exciting different features. To unlock the enhancer for that reel, you need only land a coin on the reel holding one of the features.

The feature will start with 3 spins, which will reset back to 3 every time a coin lands on the reel.

Any active rows will reveal enhancers on each spin. Which serve the following functions:

During the Lucky Wagon Spins, the bottom row Collect Chest can be activated if you land a dynamite.

When this chest is activated, it will collect the values in the reel area for the column it corresponds to for every spin. 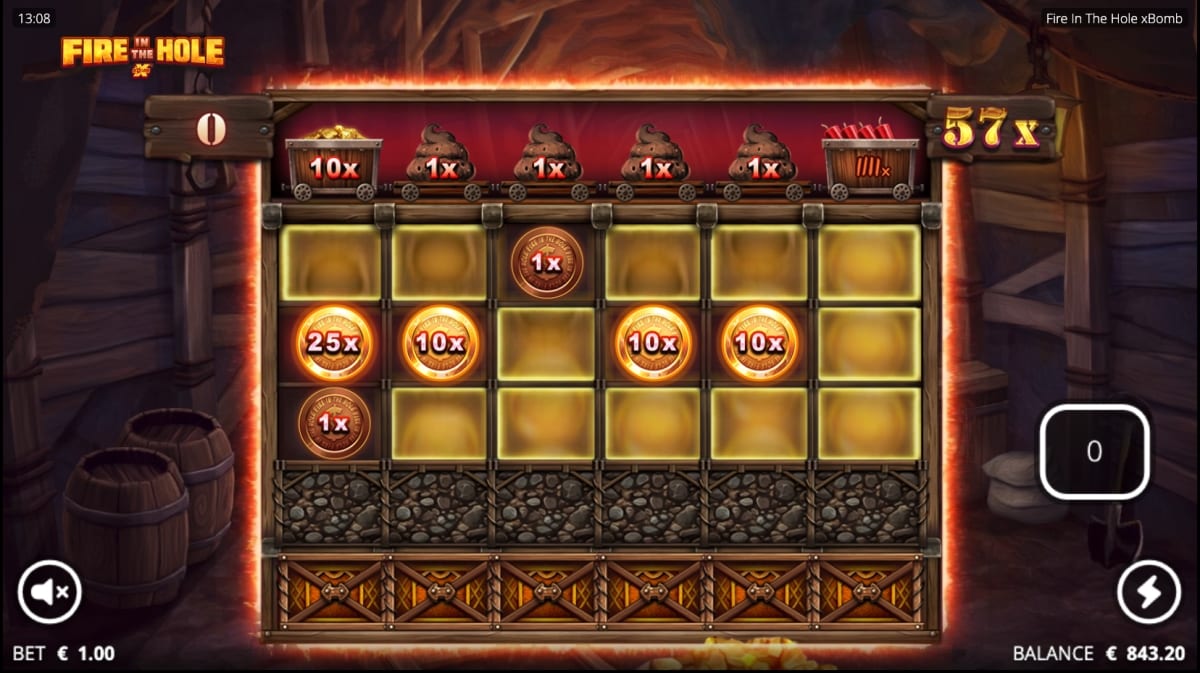 NoLimit City have included a Bonus Buy functionality in Fire in the Hole xBomb, with 3 different options at 3 different costs. These are only available to those outside of the UK.

NoLimit City did something similar with their East Coast vs West Coast and San Quinten games.

More Scatters mean more reels to unlock enhancements on. The cost of the 5 Scatter bonus is enough to make you sweat, but Fire in the Hole xBomb is capable of mammoth wins of up to 60,000x!

Beer Time isn’t a feature as such, but a pop up that will come up on screen if you manage to hit the maximum 60,000x win.

We don’t imagine a lot of people will see Beer Time…but previous games have proved that it’s not so impossible. A lucky player recently hit a win on San Quinten that was very nearly the maximum.

Fire in the Hole xBomb looks like it’s going to be yet another thrilling instalment from NoLimit City.

The game is packed full of features and reel enhancers, making it every bit as exciting as their recent San Quinten and East Coast vs West Coast releases.

Chests, Multipliers, Dwarfs and Explosions make Fire in the Hole xBomb a game to be excited about, and once again NoLimit City have made a game with a maximum win that would blow the mine to pieces!

xBomb is an interesting new feature, and it’ll be even more interesting to see if NoLimit City build upon it and integrate it into games with xNudge later on.