NoLimit City have been absolutely smashing the releases this year, and they are back with there latest adition Golden Genie And The Walking Wilds Slot.

We’ve been to the luscious green fields with Bonus Bunnies, we’ve been to London to cause anarchy with Punk Rocker, and we’ve visited old favourites like Tombstone and Deadwood along the way.

Of course, we’re back for more with another captivating adventure and NoLimit City’s newest Aladdin inspired release, Golden Genie & The Walking Wilds.

Swap your car for a magic carpet and traverse the expansive Arabian Desert in search of the mystical Golden Genie. I’m not sure about you…but we’re wishing for a 9,583x win.

A visually simplistic theme serves as the backdrop for this game. In the background you’ll see a clear and quiet night sky and a distinguished looking building bearing the resemblance of a Sultan’s Palace. The music is a subtle Middle Eastern tune and accentuates the theme well.

Golden Genie & The Walking Wilds is a 5 Reel, 3 Row video slot with 20 pay lines. Betting for this game starts at a low 0.20, with the highest available stake being 100, with a multitude of different betting options in between, there’s an option for every kind of player.

There are 11 symbols in total, and top symbol is the Genie who serves as a wild and a scatter symbol, a mystical man of many talents indeed. Further down we have Princess Jasmine, Aladdin, A Mystical Lamp, a Snake and a Leopard. Low symbols are classical A, K, Q, J & 10.

Players who are not based in the UK will have the option for a bonus buy in this game, the cost of this will be 80x your stake. 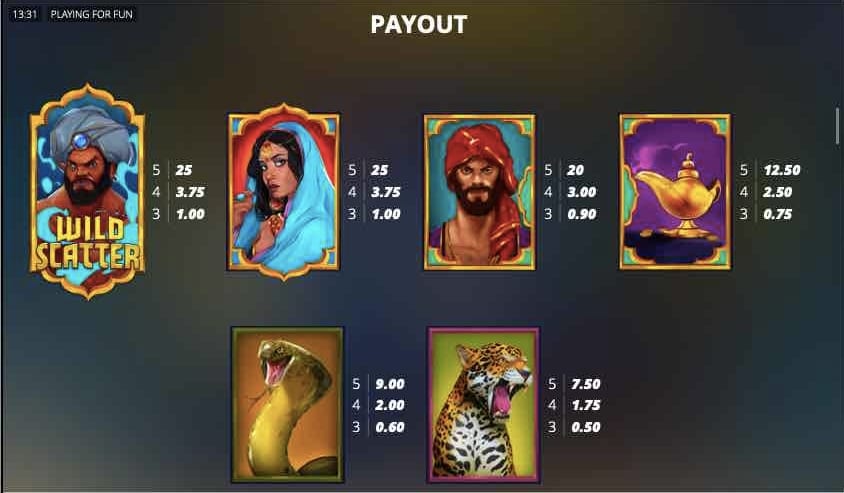 Being a 5 reel pay line game, Golden Genie & The Walking Wilds is sure to please those looking for that classical slot experience, wins will pay from left to right along any of the 20 set pay lines, all of which are active at all times.

3 of more matching symbols will be needed to form a win and the top symbol acting as a Wild will substitute any regular symbol.

Our friend the Genie has a few surprises in store for us in the form of base game features.

If Aladdin aligns himself to the left of the Lamp Symbol, then the Genie Wishes feature will activate. All Aladdin and lamp symbols will act as a Wild and each will get a random multiplier which could be 2x, 3x, 4x, 5x or x10.

An interesting feature, and we can definitely see this turning into some considerably big base game hits.

The Genie isn’t done granting your wish for an interesting and fun base game experience yet. As well as Genie Wishes, the game features another base enhancement, Genie Lamps.

Genie Lamps may trigger during any spin during the base game. Reels 2 and 4 will become stacked wilds and the game will pay both ways.

You’ll want reels 1, 3 and 5 to cooperate here with some matching symbols for them big wins.

To start a Genie Parade, you’ll need to land 3 or more Genie symbols, once this happens the bonus will begin and one Genie will become Golden. The Golden Genie will increase its own, and every other Genie multiplier by one with every spin.

When all Genie symbols disappear, the reels will spin and the bonus rounds will continue as long as another Genie lands on one of the reels. The bonus ends when no more Genie symbols are left and no new Genie appears.

Genie Wishes can also be triggered in this mode, and will transform all Aladdin and Lamp symbols into Genie symbols. 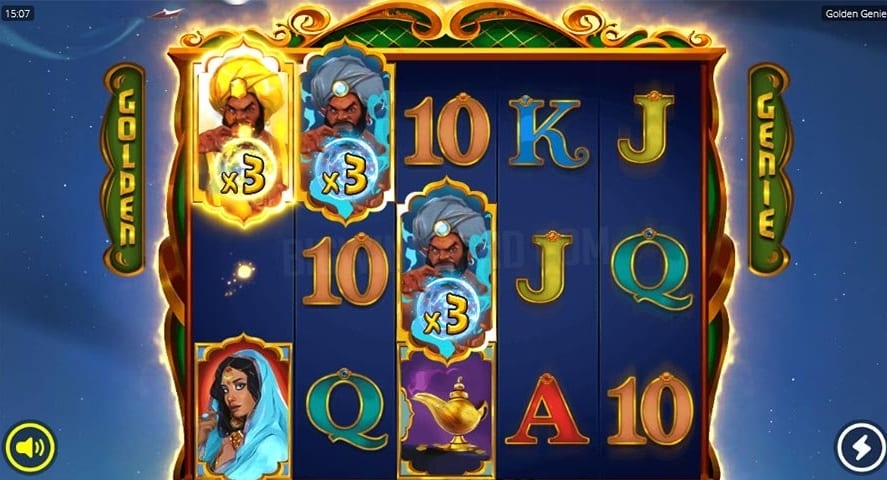 NoLimit City live up to their name time and time again. The visuals may be somewhat basic, but you’ll forgive and forget as you get stuck in with this magical instalment.

Genie and The Walking Wilds is a captivating and fun adventure boasting some great features with the Genie Wishes and Genie Lamps.

The game has huge potential with a 9,583x maximum win and the bonus is a really interesting and entrancing feature; the Genie Multipliers will definitely keep you on the edge of your seat as the bonus progresses.

The game may not be their biggest hit with the likes of Deadwood and Tombstone to contend with, but NoLimit City have got the formula right once more. Players wish for quality, and NoLimit City grants it yet again.