NoLimit City are back and it’s time to take the path of the warrior with Bushido Ways xNudge Slot.

We’ve been on all kinds of crazy adventures with some of the fierce and fantastic games that NoLimit City have to offer. We’ve caused anarchy on the streets of London with Punk Rocker, we’ve chosen between New York and LA in East Coast vs West Coast, and we’ve been down in the mines with their latest explosive release, Fire in the Hole xBomb.

No Limit city have regularly integrated their famous xWays and xNudge mechanics into their games, and they’ve managed to do it in style, making them feel a little bit different in every game they feature in.

Bushido Ways Slot will be no different, and it’s bound to be another exciting addition to NoLimit City’s portfolio.

Let’s explore the idea behind Bushido, as well as what to expect from this new slot

Bushido, or the ‘way of the warrior’ is a set of principles, or a moral code for Samurai.

The Bushido moral code and what it stands for have evolved throughout history, but it’s believed that the virtues of Bushido are Integrity, Respect, Courage, Honour, Compassion, Honesty, Loyalty.

Looks we’re ditching the anarchist lifestyle adopted in Punk Rocker in favour of Japanese chivalry and honour instead.

Through sheer theme alone, Bushido Ways Slot looks and sounds immensely exciting as you adopt a samurai lifestyle. Japanese Culture as a whole is exceptionally interesting, and tales of the Samurai have been told in countless forms of media, despite their absence in society since the 1800’s.

We can’t wait to pick up a Yumi, a Yari or a Katana and get stuck into some Samurai action.

The theme behind Bushido Ways Slot is intense, with a background showing a burning battlefield, and the music makes thigns even more dramatic with a suspenseful and dramatic Japanese theme.

NoLimit City have always put an emphasis on design quality in their games. If you look back at their older slots and compare them to those of today then you’ll see a dramatic difference in quality. This aesthetic appeal and imaginative design is part of the reason why NoLimit City is widely regarded as a favourite by many.

Betting options in Bushido Ways Slot are as you’d expect from a NoLimit City game, with a low option of £/€0.20 per spin and a high option of £/€100 per spin. There are plenty of different options in between, with good incremental increases in stake ensuring that everybody has an ideal setting.

The highest paying symbols in the game are the stacked Samurai Symbols, which gives the game a sort of Barbarian Fury and Warrior Graveyard feel to it.

The highest symbol is the Red Samurai Symbol, followed by the Blue and the Green.

There are Wilds in the game, which range from Single Wilds, to Sliced Wilds and Geisha Wilds. More on that below.

Bushido WaysSlot: The Base Game and Features

Bushido Ways Slot is a 5 reel video slot with 1,024 ways to win by default. The maximum number of ways to win in Bushido can increase from 1,024 to 12,288 through some of the exciting features at play here.

To connect a win in Bushido Ways, you’ll need to connect 3 symbols from left to right, starting from the left-most reel.

There are a number of different features in Busido which shakes up the gameplay, such as Sliced Wilds 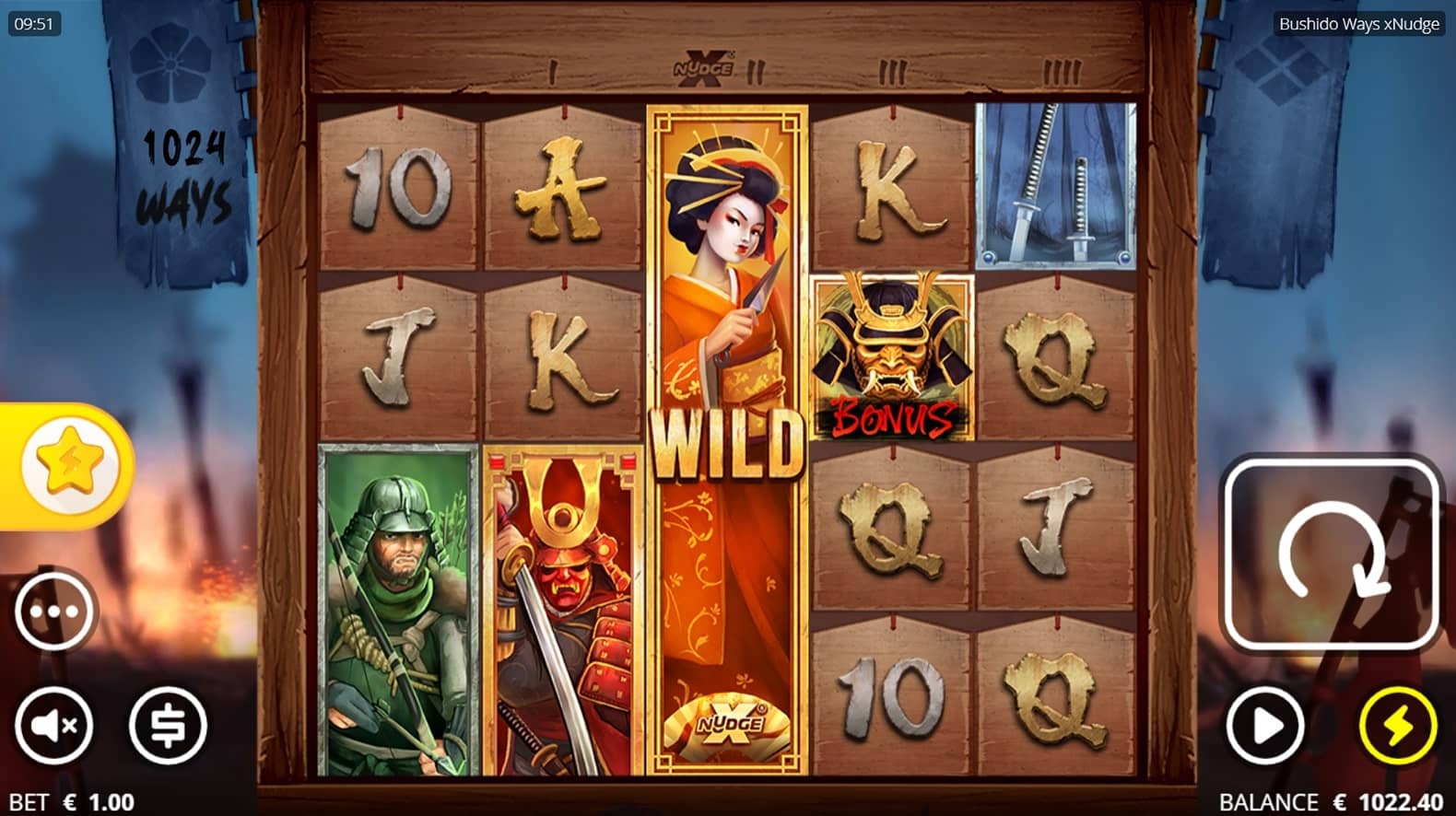 Single Wilds may land in play at any point, and their position will determine how many times they can be sliced, creating more ways to win.

In the Shogun Spins and Geishi Spins, the Wilds will also copy themselves downwards to the bottom row before slicing, which further increases the number of Wilds.

A 4 row high Geisha symbol exists on reel 3 only. When this lands, it will always nudge to become fully visible. The Wild Geisha will gain a multiplier of +1 for every nudge, up to a maximum of x4.

The Wild Mechanics in Bushido Slot look great so far, but there are still many features yet to come and much to experience when taking the path of the warrior, such as Oni Transform.

When you land a Bonus Symbol at the same time as a stacked Samurai symbols, they will transform into the best paying symbol present on the reel.

Bushido Ways Slot features 2 different Free Spins modes, depending on what symbols land on the reels.

This will either be Shogun Spins, or Geisha Spins. Each of them has their own element of excitement and potential. 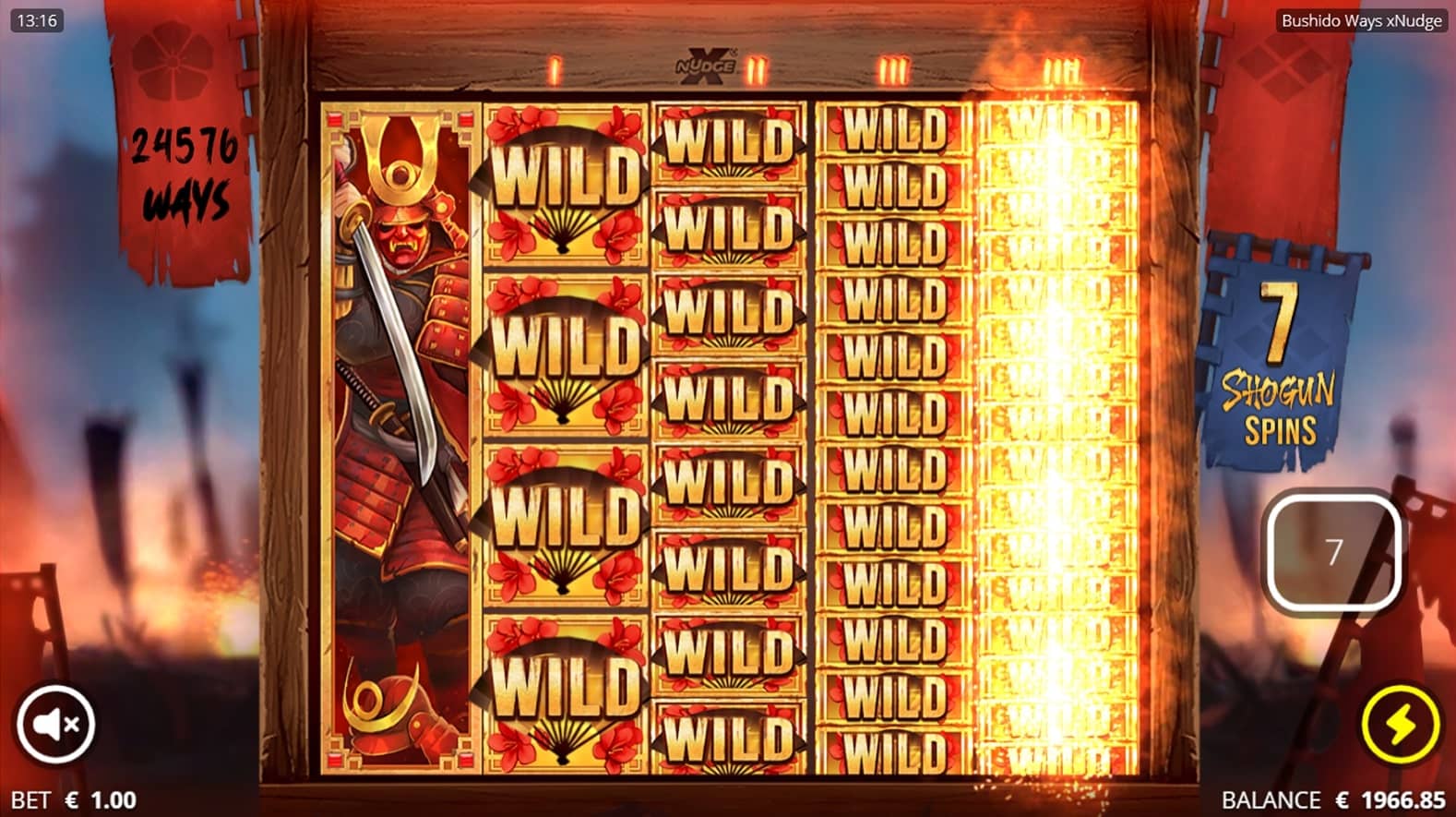 Every Spin, it is guaranteed to land a single Wild on reels 2,3, 4 or 5, which will then utilise the Sliced Wilds Mechanic, while also copying themselves to the bottom of the reels before slicing which is only seen in the Free Spins Round.

The potential of the Shogun Spins is great due to the possibility of getting a reels stacked full of Wild Symbols.

Free Spins may also be upgraded to the Geisha Spins if you land a Wild Geisha during Shogun Spins. The Extra Geisha Spins are equal to the multiply achieved for each nudge.

Geisha Spins may land from the Shogun Spins, or naturally in the Base Game.

This is achieved in the Base Game by landing 3 Bonus Symbols at the same time as the Wild Geisha.

8 Spins are awarded, and each nudge will give a Sticky Multiplier.

The Wild Geisha stays in position for the duration of the round, an extra Free Spin will be awarded if you land an extra Bonus Symbol during the round.

Every Spin guarantees a single Wild on reels 2, 4 or 5, which will again copy downwards an slice dependant on reel.

In true NoLimit City fashion, Bushido Slot has a Bonus Buy feature for those outside of the UK

Shogun Spins costs a reasonable 70x your stake, but those who want to go all in with the Geisha Spins will have to fork out 700x to buy their way into the round

Journey’s End will only be seen by the fiercest of Samurai.

This isn’t a feature per say, but another of NoLimit’s max win screens.

They included it in games like San Quinten where you’d get a ‘Psycho Manhunt’ Screen if you got the max win of 150,000x.

Sadly, Busido’s max win isn’t as high as that, but you can reach 30,000x. If you do then you’ll get the Journey’s End Screen, at which point you can lay claim to being the best Samurai that ever lived.

As it Stands, NoLimit City are the best this year when it comes to releases.

Their instalments have been absolutely Stellar, with San Quinten, East Coast vs West Coast and Fire in the Hole. Bushido Ways can be glad to join the ranks of great games from NoLimit City, offering a high action, high volatility and high adrenaline experience.

There was a lot of speculation on what Bushido might be like in terms of gameplay, but it’s clear that they’ve taken some inspiration from their previous games, Barbarian Fury and Warrior Graveyard.

Opinions on these prior releases are clearly divided, with some claiming them to be incredible releases, and some who can take them or leave them. Barbarian Fury and Warrior Graveyard doesn’t quite hold a candle to some of their recent releases, and as such it puts Bushido slightly below the likes of San Quinten and East Coast vs West Coast in terms of appeal.

Regardless, you can’t deny that NoLimit City’s creative prowess is still alive and well even despite the inspiration from their previous games.

Lots of different features and integrated Wild, Oni Transform and xNudge mechanics make the Base Game more than entertaining enough until you see what the likes of Shogun Spins and Geisha Spins has to offer, and when you get to these illustrious exciting Free Spins round you’ll find yourself with a Katana in hand, ready to take on the world.

Wins of up to 30,000x are possible in Bushido, which is a lot less than games like San Quinten, but not all games can come with potential of 150,000x. The RTP for the game is 96.01%, which puts it ever so slightly above the RTP percentage widely regarded as average.

The thing you’ve really got to appreciate about NoLimit City games is how they can actually reach the max win cap stated. We’ve seen players hit the maximum on San Quinten, and we’ve seen the maximum win hit on Fire in the Hole mere days after its release.

Some games state their max wins but it feels a bit like a pipe dream. With a NoLimit City game you can be confident that someone, somewhere, will see that Journeys End Feature some time soon.